So far only the following links seem to work:
- the link in EeNet:
http://www.eenet.ee/EENet/merikotkas
- direct stream JWPlayer:
http://pontu.eenet.ee/player/merikotkas.html
- VLC player and Android:
rtmp://193.40.133.138/live/merikotkas

The address of the Pontu archive for this camera is:
http://193.40.124.24/2017-merikotkas/
In the archive only videos are saved, not still pictures anymore.
The videos 25.1. - 27.1.2017 and 25.3. - 26.3.2017 can be found in the archive. The camera malfunctioned and the contact was lost.
Edit: To my surprise i found more videos in the archive. The camera awakened on 25.3. at 14:07 and transmitted picture and sound normally for two days. Nothing important had happened on the nest, but the bay was full of swans and geese whose loud talking can be heard from the background.

For information about how Pontu archive works and what can be found there please read here:
viewtopic.php?p=433900#p433900
In these instructions Juras-Erglis should be replaced with the word Merikotkas. Otherwise the instructions should be similar. Please let us know if it is not so.
Top


The camera is attached to a tree where Renno Nellis found a WTE nest in 2015, and the nest was not much older than that. In 2015 no eaglets grew up here, and thus installing the camera was a bit of a risk, wrote Urmas Sellis in his introduction to the nest in the Merikotkas-news in the beginning of season 2016. He continued: "Quite many different birds visited the nest in the first half of February, among them an adult bird that seems to be the owner of the nest. We saw a white-tailed eagle in the nest for the first time on January 28th; however, we were not able to watch earlier either."

In season 2016 the young eagle parents Anna and Uku raised 3 eaglets on the nest. The strain of three big eaglets stomping on the nest was too much for it: the nest gradually disintegrated in June 2016 when the eaglets were almost ready to fledge. Only two or three sticks remained on the tree.

The camera was non-operational during the Autumn but re-opened on Dec 10th 2016 for test runs. Then it was seen that the eagles had not started to rebuild the nest. Eagle's calls were heard a few times from rather large distances. On Jan 7th 2017 Urmas Sellis and Renno Nellis fetched the camera from the tree for maintenance. They also built a platform on the tree for a new nest.

On Jan 21 2017 Urmas Sellis with his team installed an artificial nest platform in the tree together with a renewed camera. Transmission from the nest began at about 12 noon.

The nest tree with the camera is located at a nest in West Estonia in the Saunja bay region, in the neighbourhood of the nest of Linda and Sulev whose lives we have watched previously (see forum).
The Silma nature reserve (Silma looduskaitseala in Estonian; https://www.visitestonia.com/en/silma-nature-reserve ) is located in this region but this nest is probably not in the nature reserve. Haapsalu is closest big city. More exact information of the location is not given due to safety reasons. If you get a more precise idea of where the nest is located from some things that you either see or hear over the camera please don't discuss or share your information anywhere in the internet. Eagles are very sensitive birds to any human disturbance during breeding season and no nest tourism may be encouraged. - Thank you for your co-operation!

The view from the nest tree opens to a bay with plenty of birds where the white-tailed eagles go hunting (see the picture in the first post on this page). More information about Saunja bay here:
http://www.looduskeskus.noarootsi.ee/?p=189&lang=en

The camera and all other necessary equipment were installed in mid-January in 2016 by Urmas Selllis, Renno Nellis (whom we already know) and two other crew members Omar and Triin. The work took two days in very cold weather, around -15⁰C. Later Renno and Omar returned to adjust a few minor details.

The camera system is equipped with a light-sensitive switch which turns off all power-consuming devices in the evenings and back on in the mornings as light returns. This saves energy significantly and there will be no need to change batteries during the season. Such a trip might disturb the nest life of the eagles. The batteries are charged by solar panels which were mounted in a tree. Solar panels work well when they are not covered by snow and the sun shines. Later in summer days will be longer and it is expected that camera image can be transmitted all day and night.

In last year's topic there is a more detailed description with pictures of the installation:
viewtopic.php?p=438766#p438766
For more details about the camera system please read the description by Urmas Sellis. This description is also the source for most of the information here.
http://www.looduskalender.ee/en/node/26484
Top


Last year (2016) we were privileged to watch three eaglets growing up in this nest. Their parents were named Anna and Uku. The female Anna wore Estonian ring blue-over-white ring on her right leg. The colours on the left ring were black over blue with individual code B450 on the left leg. The colour combination of the left ring together with the letter B indicate that she was ringed in 2009 (as a chick). The male Uku had no rings. Their eaglets were ringed on May 26 and given names Nord (E332), Rahu (E331) and Taibu (E333).

Three growing eaglets making increasingly vigorous wing exercises were too much strain for the nest: it disintegrated gradually in the latter half of June 2016. Eaglets were not harmed because they were big enough to stay on the surrounding branches and continue their exercises. Finally there were only a few branches left of the nest.

That is also how we saw the nest on Dec 10 2016 when the camera reopened for test runs. The eagle parents hadn't begun to rebuild their nest for the coming season in the same place. This is a little worrying considering our prospects of seeing a new generation of eaglets growing up here in the coming season. Urmas Sellis and Renno Nellis made a trip to the nest site on Jan 7 2017 to see what the situation was. They found no evidence of eagles at or near the nest site. They built a platform in the tree for a base of a new nest in hope that the eagles would return. They also took the camera with them for maintenance service.

A more detailed description of the family in 2016 with pictures is given in the beginning of last year's topic:
viewtopic.php?p=438762#p438762
Top

How beautiful. Now we have a perfect picture. They are still at work

someone is at the eagles' nest! there a green back-bag.

and a handsome platform for a nest.

now a guy climbed on to the platform.

is this Urmas? or someone else?

he has big beard like Urmas but looks kind of different.

he is making a phone call.

yes we can see you clear and bright.

he lifted up a big bunch of juniper twigs.

"nyt alkab koto kaunistamine" - "now starts making home beautiful."
he is going to do the eagles' work for them. 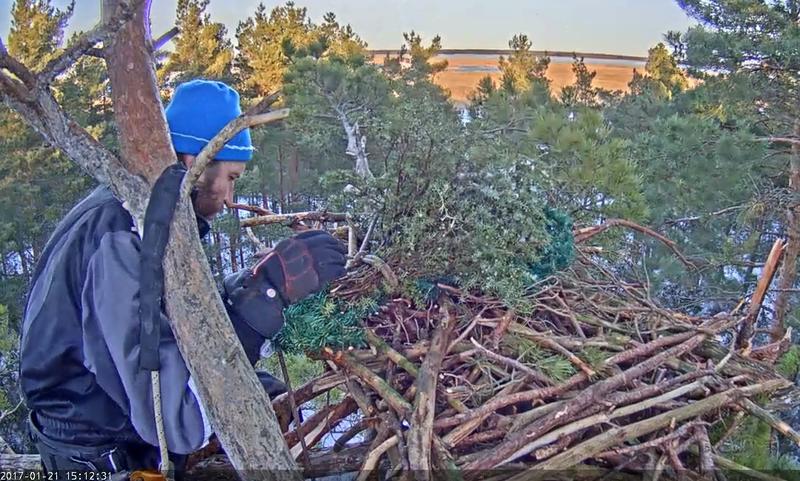 that was an artificial branch! he is recycling his plastic Christmas tree. he is hiding the camera with them.

i hope that he will not over-do the hiding. the plastic twig is partly blocking the view. 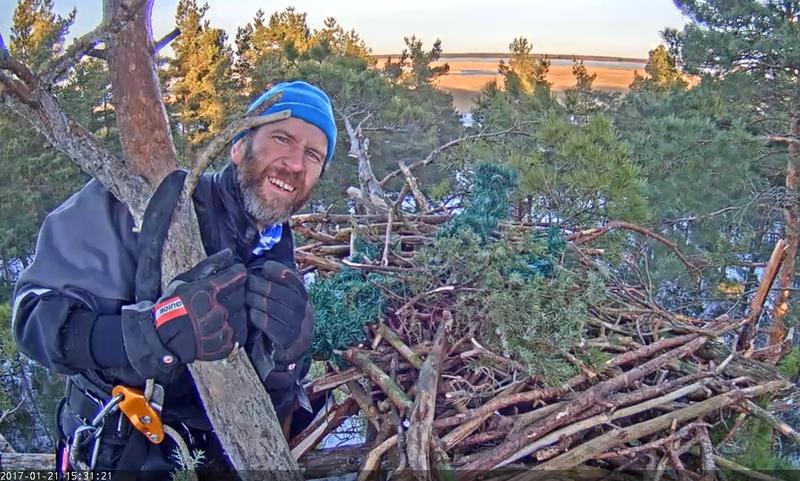 he said that he'll put the juniper twigs in front of the camera. "ma paan ne sissä etei nää" or something like that.