by Felis silvestris
This year it is not clear if we will have this Black Stork nest and if yes, who is coming to make a nest, and if somebody is coming at all. 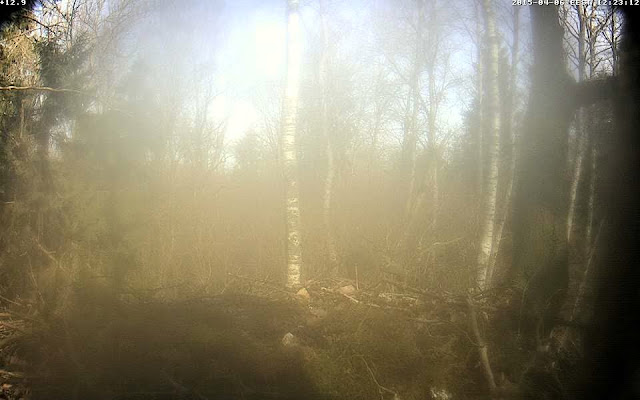 by Felis silvestris
Facts about the previous seasons

2014 Tiina arrived on March 29. On April 12, around 9 AM, still waiting for Tiit to arrive, Tiina laid an presumably unvertilized egg. During the night of April 17 or early in the morning, Tiina laid another egg, but did not incubate any of them. During the morning and before noon, she was acting very agitated and shortly before 1 PM a second stork arrived. We decided after a lengthy discussion and comparison, that the new stork is a new male and not Tiit. He disposed of both eggs. On April 18, at 15:54, another egg appeared, which was almost immediately destroyed by the male. On April 21, at 6:48, Tiina laid a fourth egg, which was most likelyy fertilized by this male. Nevertheless, 10 minutes after it was laid, also this last egg was destroyed by the male. On April 22 both storks were last seen on the nest.

by Felis silvestris
The cam just went online, I have no idea who is there or who will come. We will see! Happy and lucky season to all!

by asteria
It's foggy here but one can see a fresh portion of moss so at least one bird has arrived.

by Felis silvestris
Hope the lense will clear, but with changing light, the white is already gone. Maybe some bark from the tree ahead.

by Michi
Hello together,

by asteria
Anyway somebody was here and brought the moss.

by Lussi05
I also think it´s very nice to watch this nest again, it´s going to be very exciting to see what happens here this season. Thank you

by Birdfriend
Wow! The cam is working again. Thank you for Opening, Felis Silvestris.

by Felis silvestris
First day, problems to get stream stable, the lense is also still foggy. It all will sort out with time

by Felis silvestris
Stream is still not stable. Comes and breaks off again. The lense is still damp and fogged.

by asteria
Cam is working at the moment but the picture is rather bad, just a set of spots. And nobody in the nest.

by Owlie
Welcome camera view! I hope there will be better luck for us watchers this season than last year

BTW Did Kotkamen find out something about Tiina and the new male last year - did they have a nest and chicks?

by Felis silvestris
I have got the information that the instable situation with this camera is due to a problem with the antenna at the mobile tower. Renno is trying to fix the problem, but it is not sure when it will actually work out.
No other news, only that it seems that there is presently no activity in the nest.

Next weeks I will check Tiit and Tiina´s territory (in the top of spruce tree) to find out what they are doing here. If they are breeding somewhere close then sooner or later probably male will visit also webcam nest. But hopefully they will arrive during next days and breed in our webcam nest.

by Owlie
RENNO,
thank you very much for sharing with us what you know!

by Michi
Thanks a lot, Renno! Your informations about the Black Storks nesting behaviour and arrivals are exceedingly interesting.

by Felis silvestris
The stream of several cams is interrupted.
All times are UTC+02:00
Page 1 of 10