Janne+Ais wrote:For me it is interesting. One can read, that ospreys are not faithful to their partners but to their nest. Madis and Piret disprove this theory.

It is true that ospreys are faithful to their nest, and this nest loyalty in turn leads to the same pair occupying their nest or nests year after year, until one partner dies and is replaced by a new partner. But this is only a general, basic rule, it's not written in stone for all eternity.

Some ospreys, but far from all, do have a second nest. These second nests again, are sometimes merely a heap of sticks, not even big enough to raise a clutch of chicks in, and sometimes they develop into real nests.
One reason why they sometimes build a second nest could be that when fishing is good for the male, and he can easily provide for his family, he has time left on his hands (or rather talons). Another reason why this sometimes happens, is when a pair of ospreys are early breeders in the season. By the time their chicks have fledged, it's still too early to migrate, and the adults are still in breeding mode, so they (mostly the male) keep collecting sticks. The third reason is that they often build an second nest when a breeding attempt fails, and it's still too early to migrate etc. Such a nest is then called a "frustration nest".

Last year Piret and Madis' breeding attempt failed, after all the hassle with Oxana, and the fights between Piret and Oxana which followed. When Piret finally reclaimed her nest and Oxana was driven off, it was already too late to breed, and after a week or so they only visited the nest sporadically. Therefore it is not unlikely that Piret and Madis did build a second or frustation nest last year (or extended an already existing second nest), and that they this year decided to breed there.

When Madis arrived this spring, he began with restorations on the old nest, but when Piret also arrived, these 'nestorations' stopped within a few days. This makes me believe that Piret, as the female she is, chose the other nest to breed in (in many species -often including the human species

- it's the female who has the last word when a nesting site is picked; the male only presents possible nesting sites).


And when you are a male osprey called Monty, there's a fourth reason to build a second nest...:


Sometimes we hear people talk about ospreys building 'frustration nests'. These are birds starting to build an additional nest close to their primary nest. But why?

Frustration nests are usually associated with birds that have failed to breed in a particular year or birds that have finished breeding early. The Glaslyn male osprey is a classic example of this type of behaviour.

Because both Glaslyn ospreys return to breed so early in the year (they usually have chicks by mid May!) they also, therefore, finish earlier. However, their biological clocks tell then that it's not time to return to Africa (or southern Europe, we don't know) yet. Problem is, the birds are still in 'breeding mode' in late July and August despite their offspring having fledged the nest weeks previously.

So a convenient interpretation for birds building supplementary 'frustration' nests (only a few sticks though usually) is this pent up urge the birds have do breed because they are still at their breeding site and breeding time of year. A classic 'displacement behaviour' where an animal's basic drive (in this case to breed) is frustrated owing to the fact that the chicks are well and truly grown up!

So with all that cleared up then, what on earth is Monty doing here in mid/end of July..

He's not failed to breed, he's not early (in fact, he's very late) and the chicks are only four and a bit weeks old. This camera pole was here last year and we saw no such behaviour then, but since around July 20th this year Monty has started to build himself a second nest - just feet away from his main nest.

Just when we think we're starting to understand these wonderful birds, they go and prove how utterly naive we all are. How very humbling. Please do suggest an explanation if you have one in the comments below of what Monty is up to, because I have absolutely no idea!

We asked Roy Dennis what he thought Monty was doing, here's his response. Thanks Roy.

Some males do a lot of building as the chicks grow in the nest - it makes the nest flat and also more secure for the following year, but it is rare that nests have an obvious extra base just above them. The camera array top encourages the male to have the new nest at the most prominent place rather than down below the structure. He would prefer to use the highest site as it will have 360 degree vis and approach, if it was still there next spring he would use it.

This is what Monty's new nest looks like now, August 4th!!

Isn't life wonderful! And Monty's nest with a second floor!
The video review is a really nice season view of an osprey family life.
Top

Someone said that it's the female osprey chooses the nest to breed.
Compare with Maya in Rutland, Piret didn't stay around the cam nest these two years.
So I think she probably won't come back here to breed next year.
I hope Urmas or somebody can help them to make the new nest solid,
just like Perkons & Lauma's nest. I really hope Piret can have a successful breeding
next year, and most important, someone can take off her broken transmitter.
Top

Here are the pictures Urmas took of the Osprey (possibly Madis), who appeared also on the place when Tiiu was trapped.
Pics are taken from quite far distance. 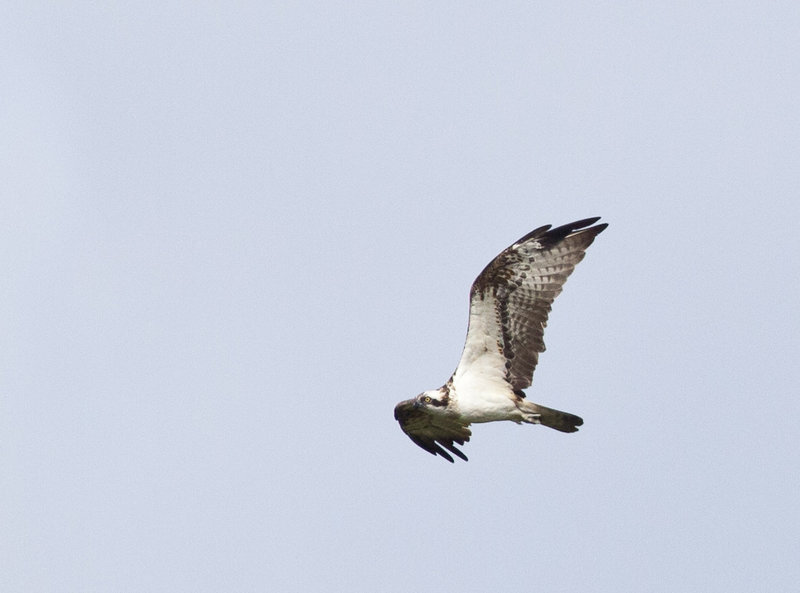 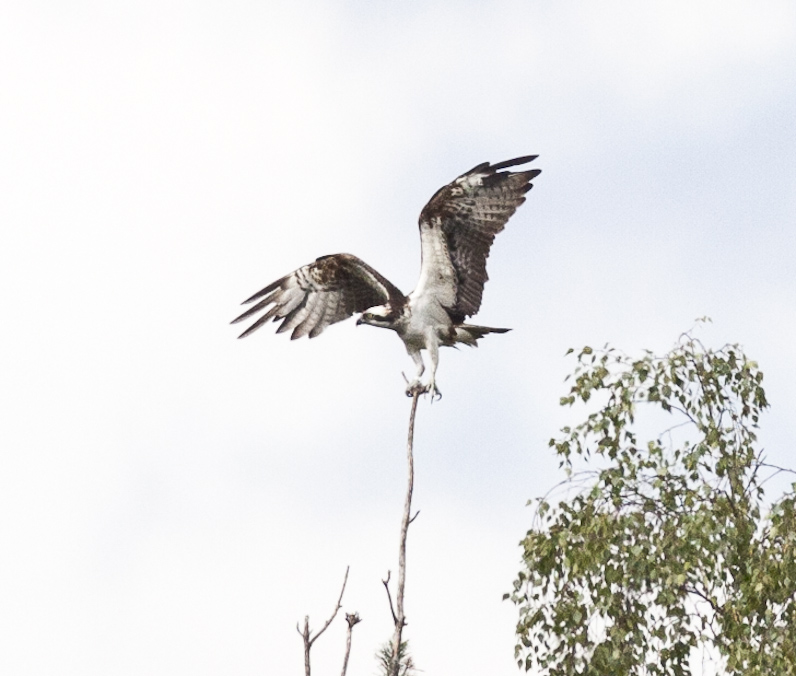 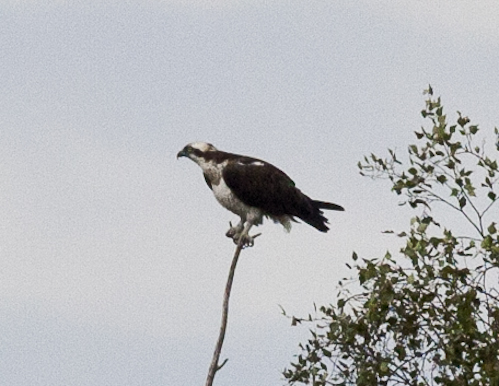 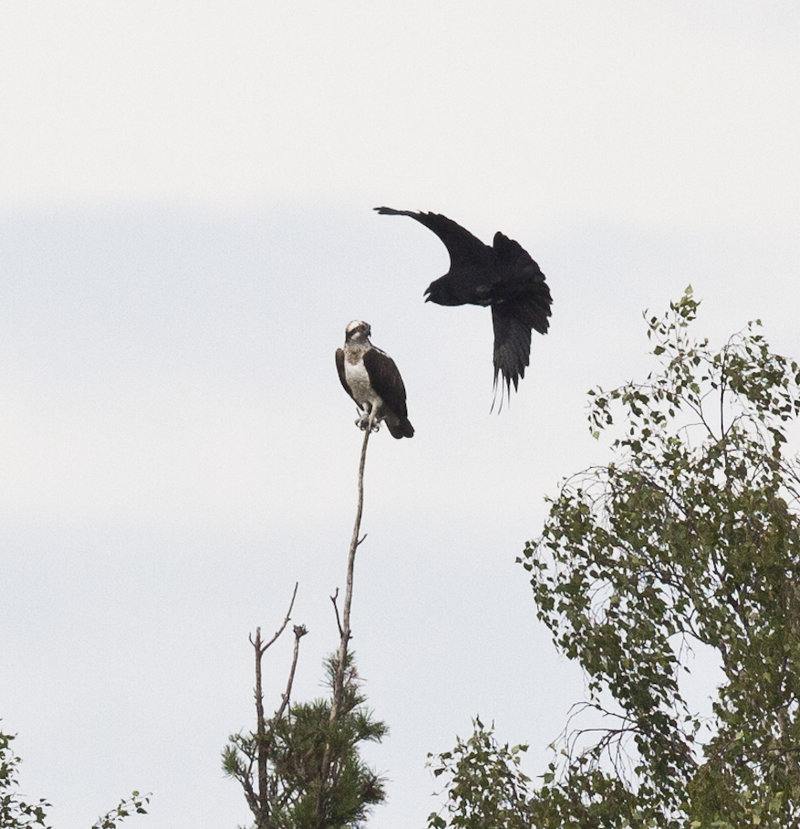 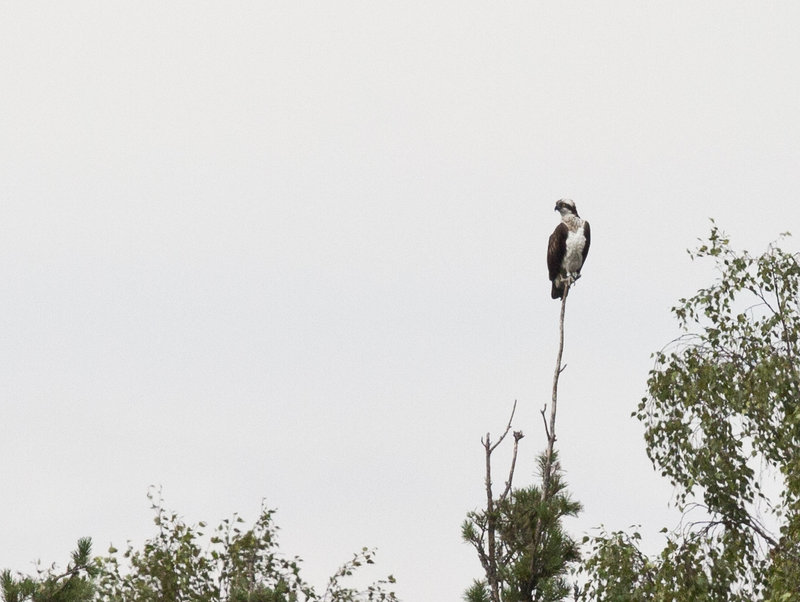 I can see a metal ring right leg and maybe we can find pics to compare darker patch of plumage on the throat or other characteristics .....?
Nature does nothing in vain (Aristoteles)
Top 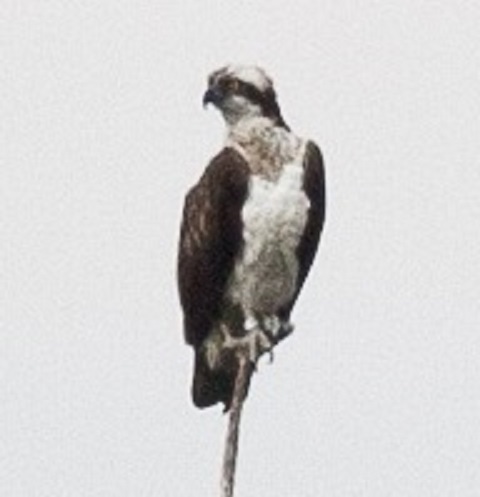 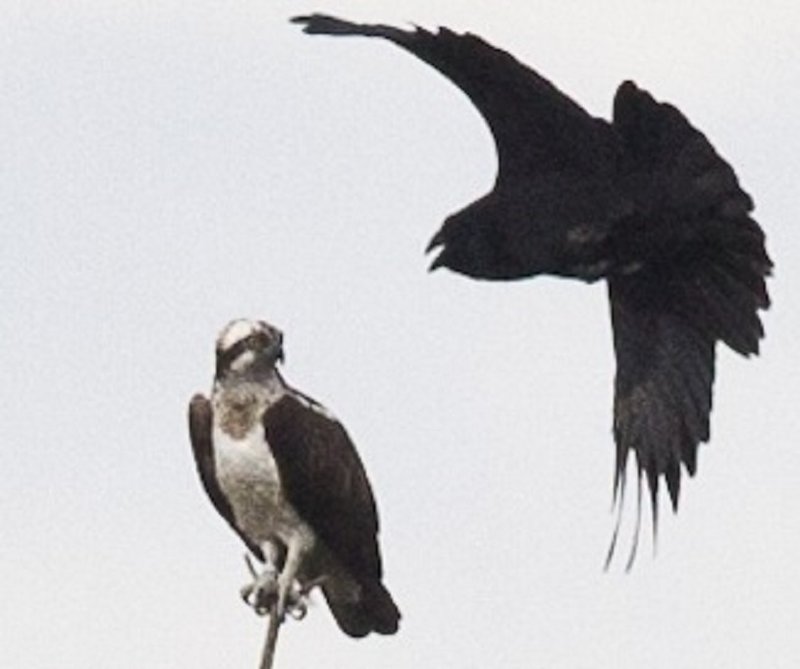 I just looked at old pictures of Madis, and the size and coloration on his breast patch look identical with the osprey Urmas photographed near the fish farm where Tiiu was trapped and fitted with her transmitter. Also the head markings look pretty similar.

Furthermore, this bird has a metal ring on his right leg (just as Madis has), and was seen in the same area as where Madis has his nest(s). As far as I know ringed Estonian ospreys have both a metal and a plastic ring, but Finnish ospreys often have a metal ring only. And we know that Madis was ringed on a nest in Finland.

It would be rather unlikely if there was another adult osprey there who looked similar to Madis, has only a metal ring on his right leg, just as Madis has, and who is around at Madis' fishing grounds.
Top

Madis looks so elegant and majestic on that narrow stick of a branch ...
Is it a raven flying by in the picture of two birds - which Madis seems to take cool and rather regardless ...?
Top

Bea wrote:Now we know more about how this season went on for Piret and Madis .....

It explains a bit more their behaviour on later appearances on the nest.

Very, very sad news, indeed. Yes, they are probably still together as a pair, if that was their nest, but so sad that a 2nd year went by with no living offspring. I hope that is not the case this next year and we will see them, again.

Most osprey researchers operate with numbers telling that 0,8-1,25 produced fledglings per active nest each year is enough to maintain a given population.
So in this regard Piret & Madis have still done their job, with an average production of 1 chick per year (3 chicks in 2012, 0 in 2013, 0 in 2014 : 3 = 1).

Fingers and talons crossed that both return safe and sound next spring and produce a nice clutch of 3 fledglings again, preferably on their old and solid nest, so we can watch them without having to fear much for another nest structure collapse.
Top

It makes me so sad that to read. I hope for Madis and Piret that they have more luck in the next year!Maybe, the eaglemens can make safe the second nest.

Finally got DNA analyses results form 2012 samples.
Those were sent to our Italian colleague Flavio Montti, and he managed to make analyses in France.
So the results of 2012:
Estonia S8 M
Estonia S9 M
Estonia S7 F

Thank you Urmas, for these news, many fans waited for this info

Just to bring it back to our minds, these are the genders of chicks from the first Estonian Osprey season in 2012 (Piret & Madis):

Urmas wrote:Estonia S6 ? (did not work out) (Ilmar)

Thank you Urmas!
Very interesting, that it is so difficult.

Thank you, interesting information!
Maybe we will meet them in a few months ??

In general, DNA analyses are not so difficult issue, but this time our colleagues investigated other genetical aspects and btw performed sexing analyse. Genetics tell that Osprey is not the best species for genetical sexing, I don't know why exactly.
Probably getting together sufficient amount of samples took more time.

Yes, there is some probability that we can see those familiar Ospreys somewhere. During the nest controls we photograph almost adults at nests and that is made to see the rings. Also the change of mates at nests is possible to see comparing the plumage (you know that well).

The sample of Ilmar was not in such good condition (think DNA damaged by some reason at storage, fungi, etc) to determine the sex chromosomes. Know that four times was tried and then given up. Fortunately we know well about Ilmar without of genetical approach.
Top

Thank you Urmas - this kind of scientific information is a treasure for us!

We'll see, if we meet one/some of the M/P chicks from 2012 this season- it would be a dream like experience!
Top

Elo is a male? Then meierlein should urgently correct her signature!

Hello! Will be enabled camera-2015 in the nests of our favorite ospreys?
Top

Of course we hope for at least one Osprey Webcam, but which one and when it will come online is still not known.

Thank you! It seemed to me that in early April, 2 years ago a couple was already sitting on eggs, the second was prepared.