it is still there

Thanks, Liz. I don't know why I didn't recognize him. lol

6:45 jumped on the left branch
Top

back in the nest. it is Ansis

6:52 mating on the left branch 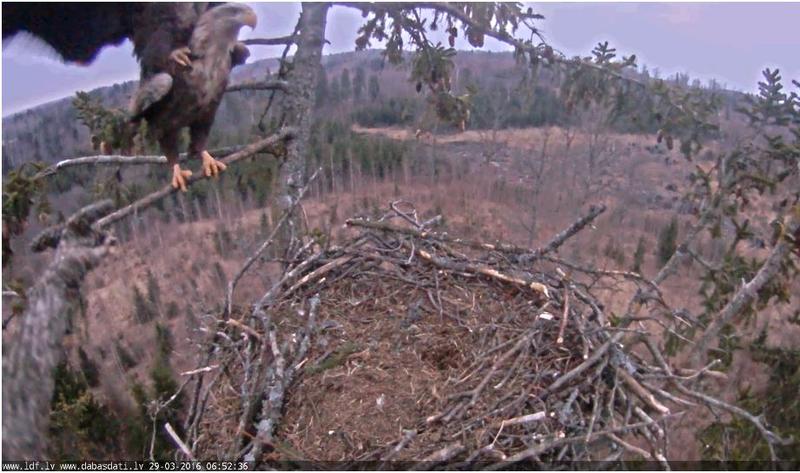 Ame, I did not see everything. but it looked good?

I don't know if it's perfect, but the picture is nice and gives hope.

I expected to find some greenery in nest

i have a video of the mating this morning. it perhaps was complete but it's difficult to say.

i have now more clips from this morning.

after the mating they stayed on their branches for a while.
6:58 Egle flew out.

then again they just stayed there, Ansis on the branch and Egle on the nest...
7:07 Ansis flew away.

Egle flew after him 10 s later.

10:29 both arrived practically at the same second. Ansis landed on the nest and Egle on the top branch.

Ansis followed right after her.

a little later Ansis landed on the tree top. Egle looked up at him.

after she had vanished behind the pond Ansis flew away from the tree top and followed her. i noticed this in the video almost by accident and then i rewound the video to find out when he had come.

13:32 the two swans flew by quite quietly for a change.

they flew so quickly that i made a slow-slow motion clip of them. this is probably in 1/9 of slow motion.

16:23 raven voices and eagle calls. the wind has become so loud that it's difficult to hear.

an Estonian eagle with all-black year ring made a brief visit.
it had its rings in wrong feet: the country ring was on the left foot and the black ring in the right.
oh no it was a Latvian eagle after all: the right ring had blue over black but it looked all black. the year ring has same colours as the Estonian ring : blue over white. the letter was C and i think that there was number 0 after it. or was it 6?

anyway a C-bird is ringed in 2010, like Anna in the Estonian nest.


this fellow was new here.

eagle on the nest tree 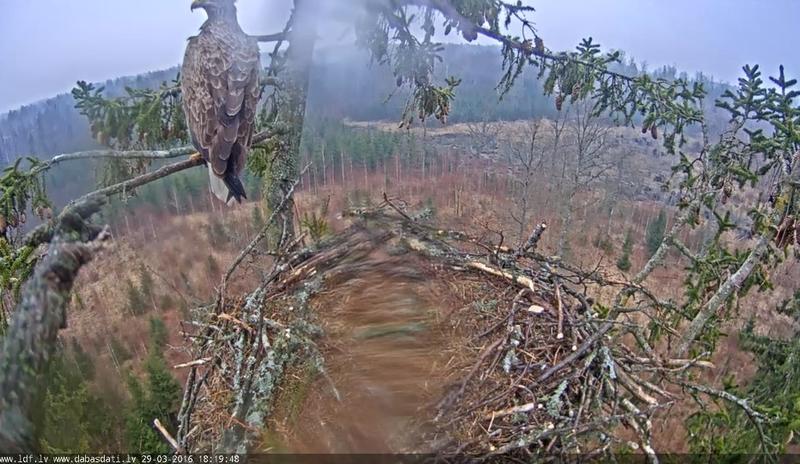 ame wrote: anyway a C-bird is ringed in 2010, like Anna in the Estonian nest.