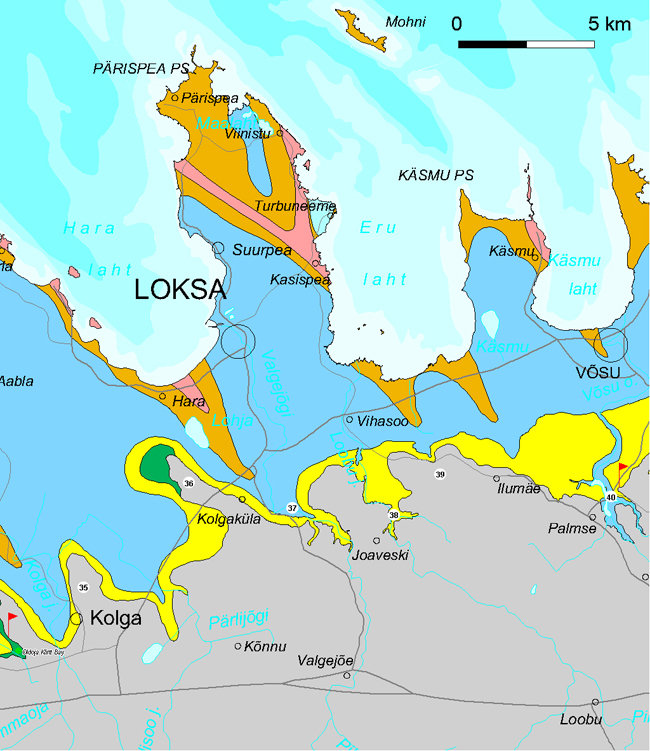 Lahemaa Klint section encompasses app. 70 km of the North Estonian Klint in an area between Muuksi Klint Cape (Oldoja) and the Palmse Klint Valley. The klint section is characterized by partly or fully buried, strongly indented and rather gentle-sloping off-sea escarpments. Ordovician (limestone) and Cambrian I (sandstone) escarpments are separated by a 2–3-km-wide, deeply sand-buried Cambrian terrace here.

34. Muuksi Klint Cape protrudes nearly 5 km long and up to 1 km wide northwest between the Kahala Klint Bay System and Pudisoo Klint Bay. The limestone plateau lies at 48–52 m asl here. The Cambrian-Ordovician escarpment bordering the klint cape is at its highest (up to 30 m) on the northeastern slope of thecape, where an Ancient Estonian fort with a triangular ground plan area was located from the second half of the 1st millennium BC to the end of the Viking period (11th century). It was protected from three compass points by a natural escarpment – the klint. 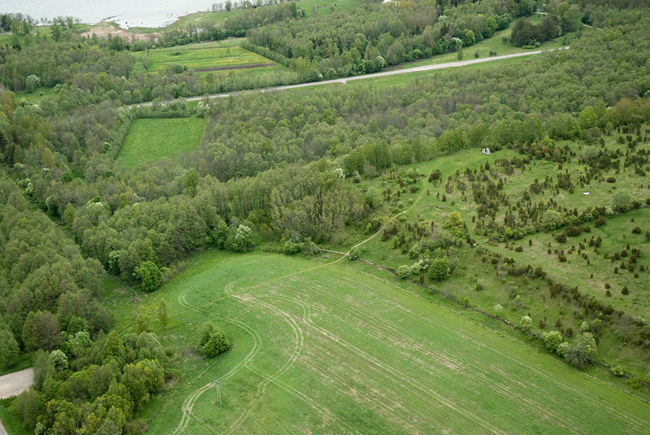 Pudisoo Klint Valley is mostly buried and cuts nearly 12 km long into the limestone plateau in southeasterly direction between Muuksi and Kolga Klint Capes. The lower course of the Pudisoo River runs in the klint valley but not in the centre of the valley but along its northeastern slope. The klint valley is app. 1 km wide at mouth and nearly 100 m deep. On the western side of the Juminda Peninsula, the Pudisoo Klint Valley continues as the Kolga-Aabla Klint Valley – the deepest of the buried ancient valleys of the North Estonian Klint, penetrating into the crystalline basement down to the level of 150 m bsl near Kolga-Aabla. 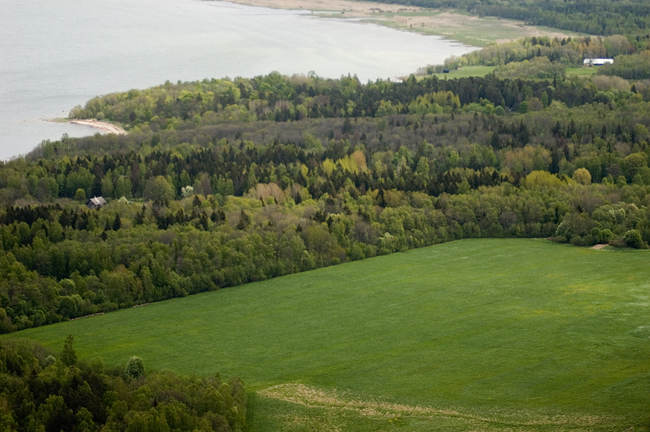 35. Kolga Klint Cape is up to 1 km wide and protrudes nearly 3 km northward between Pudisoo (in the west) and Liidikõrve (in the east) Klint Bays. The limestone plateau of the klint cape lies at 42–51 m asl. It is bordered in the north by a partly buried and relatively gentle-sloping up to 10-m-high Cambrian-Ordovician escarpment.

Liidikõrve Klint Bay cuts up to 3 km long and up to 4 km wide southeast into the limestone plateau between the Kolga Klint Cape and Kolgaküla Klint Peninsula. The Pudisoo River, which thrashes restless between coastal ridges at its lower course, has its upper course (Pärlijõgi River) in the central part of this up to 30-m-deep klint bay. The klint bay is mostly buried by sand but its contours are somewhat traceable in the topography in the southeasternmost part of the bay, northwest of Loksa Road. At Punsu Main Ditch, the klint bay is dammed by an up to 10-m-high coastal hook of the Litorina Sea. 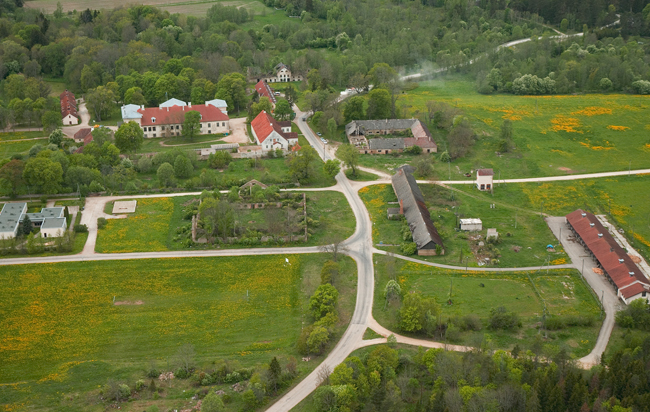 Kolga Klint Cape and the ruins of Kolga Monastery. 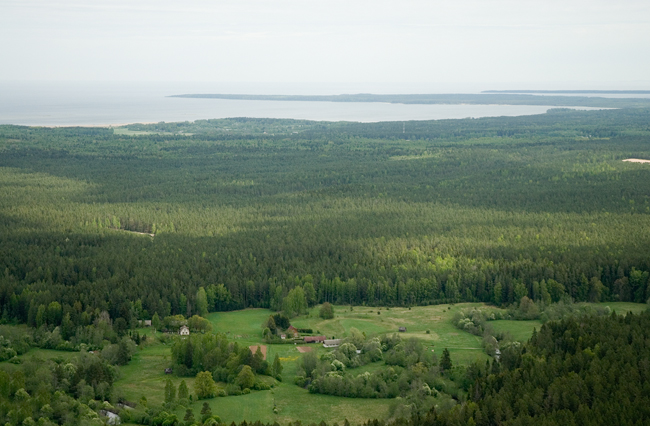 37. Valgejõgi Klint Bay, which changes into the over 50-km-long Valgejõgi Klint Valley, is 1–5 km wide and up to 150 m deep, starting from north of Parksi Village (at the mouth of Vasaristi Stream) and running northwest across Lake Lohja and the Juminda Peninsula. The present-day Valgejõgi River Valley follows its ancient predecessor only at north of Nõmmeveski. At Nõmmeveski, where the Valgejõgi River breaks through the southwestern slope of the limestone plateau down into an ancient valley, it has cut an up to 15-m-deep canyon into bedrock and drops over a 1.2-m-high waterfall.

Vasaristi Stream, which descends into the klint valley from the southern bank of Valgejõgi Klint Bay, falls over the three-step Vasaristi Cascade.

Joaveski Klint Peninsula, which is mostly buried under the sands of the Litorina Sea and therefore hardly traceable in the topography, encompasses an area of a few square kilometres between the Valgejõgi and Loobu Rivers. Only at Joaveski and Nõmmeveski, where the rivers Loobu and Valgejõgi descend into their respective ancient valleys, can one see bedrock cropping out in riverbank escarpments. At Joaveski, the Loobu River drops more than 5 metres over 8 low (0.5–1 m) limestone escarpments divided over an app. 150-m distance – the Joaveski Cascade. 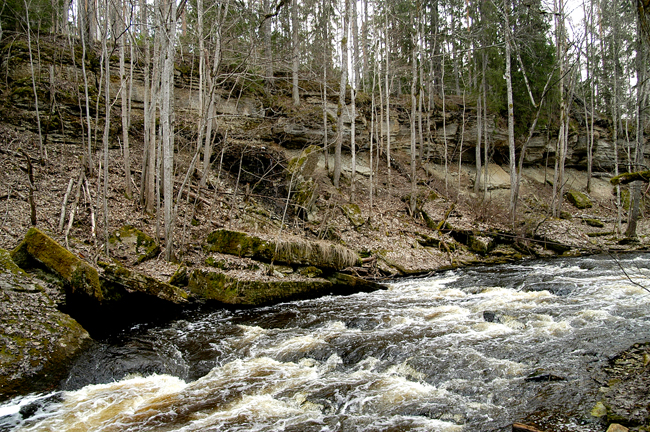 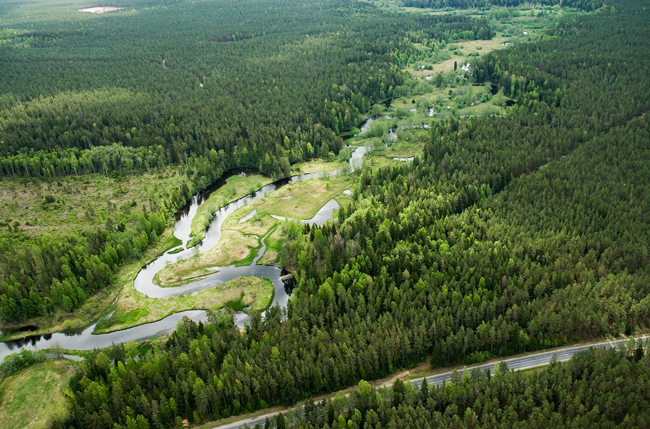 38. Loobu Klint Valley is 30 km long and largely buried. It follows the course of the present-day Loobu River only for 2–3 km in its mouth area and for 15 km at south of the Viitna Lakes (the Kõrvemaa Fault Zone). In the remaining area, the present-day and ancient valley run more or less in parallel, with the former located 1–2 km west of the latter. The depth of the rather narrow (up to 500 m) and gentle-sloped ancient valley is only 20–30 m on the limestone plateau but increases to 40–50 m promptly when the valley descends from the klint. 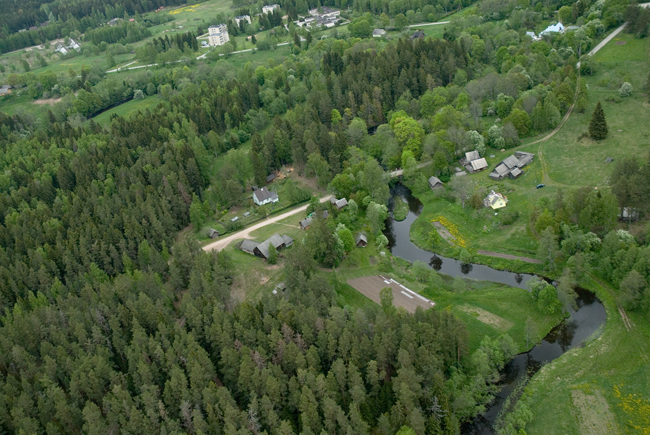 39. Ilumäe Klint Peninsula protrudes up to 7 km long and 2 km wide northwest between the Loobu and Palmse Klint Valleys. The klint peninsula is bordered in the north by a klint with flattened terraces. The limestone plateau lies at 55–65 m asl. Northeast of Tõugu Village, an app. 20-ha megablock has broken loose from the edge of the klint plateau and slided downward for nearly 25 m in the direction of Eru Klint Bay. At the edge of the escarpment bordering the Ilumäe Klint Peninsula in the north lie five old and respectable villages: Vatku, Võhma, Tõugu, Ilumäe and Muike. Unique is also the Ilumäe Chapel at the edge of the klint, whose windows are decorated with 14 copies of stained glass arms of the nobility of Palmse Manor and local peasants (the originals dating from 1729 are kept in the museum of Rakvere). 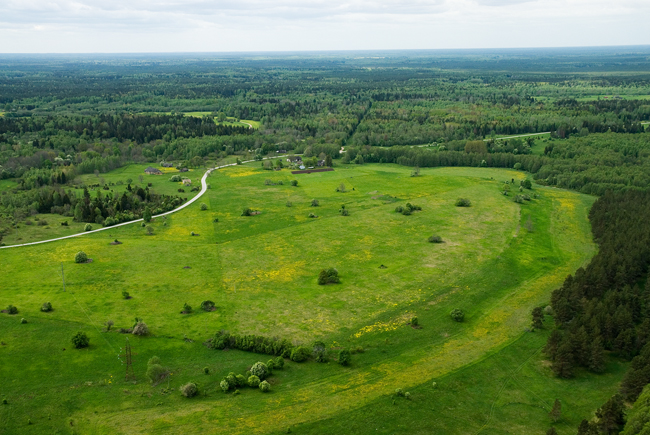 40. Palmse Klint Valley cuts into the klint plateau at Oruveski Artificial Lake, north of Palmse Manor. The nearly 1-km-wide klint valley is nearly 90 m deep at mouth. The klint valley is southeast trending and rapidly decreasing both in depth and in width, turning south at north of Viitna and joining the Loobu Ancient Valley at behind the Viitna Lakes. On the left bank of the Palmse Klint Valley stands the Palmse Manor Complex, whose manorial buildings stand on the limestone bank of the valley, while the park and the artificial lakes lie above the valley.

About one km north of Oruveski, at the mouth of Muike Stream, the Palmse Klint Valley broadens into the up to 2-km-wide Eru Klint Bay, which runs northwest in diagonal across the present Eru Bay and the northern part of the Pärispea Peninsula. At west of Viinistu, the deeply buried klint bay is divided into two by a 50–60-m-high bedrock ridge. Under Eru Bay the klint bay cuts into basement rocks, with its depth extending already to 140 m on the Pärispea Peninsula. The escarpment bordering the buried klint bay is particularly steep and high (up to 150 m) in the northern part of the Vatku-Muike Klint Peninsula. 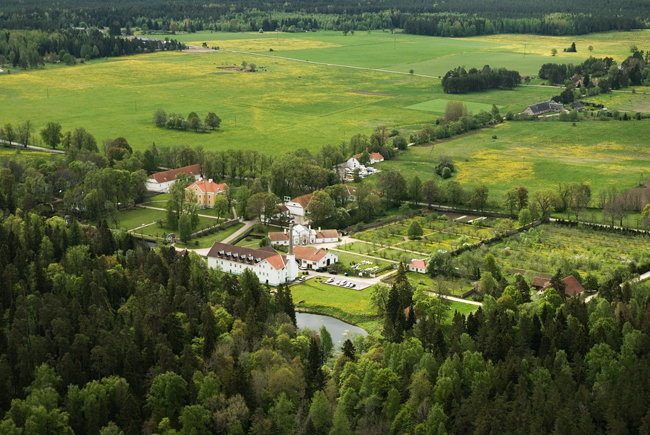