The Estonian Ornithological Society elects a bird of the year in Estonia since 1995 and the 22nd in line is the great tit. The aim of selecting a bird of the year is to introduce a bird species or group of species present in Estonia to the public and to bring along nature enthusiasts in the study and protection of this species. The Year of the Tit is supported by the Estonian Environmental Investment Centre (Keskkonnainvesteeringute Keskus).

The great tit (Parus major) belongs to the tit family Paridae. It is a widespread and common bird throughout Europe, the Middle East, Central and Northern Asia, and parts of North Africa.

The great tit is a distinctive bird with a black head and neck, prominent white cheeks, olive upperparts and yellow underparts, with some variation amongst the numerous subspecies. Female birds are slightly smaller than male birds. The plumage of the female is similar to that of the male except that the colours are overall duller; the bib is less intensely black, as is the line running down the belly, which is also narrower and sometimes broken. Young birds are like the female, except that they have dull olive-brown napes and necks, greyish rumps, and greyer tails, with less defined white tips
It is predominantly insectivorous in the summer, but will consume a wider range of food items in the winter months. Like all tits it is a cavity nester, usually nesting in a hole in a tree and in all kinds of next boxes.
Great tits are monogamous breeders and establish breeding territories. Territories are usually reoccupied in successive years, even if one of the pair dies, so long as the brood is raised successfully. Females are likely to disperse to new territories if their nest is predated the previous year. Although the great tit is socially monogamous, extra-pair copulations are frequent. One study in Germany found that 40% of nests contained some offspring fathered by parents other than the breeding male and that 8.5% of all chicks were the result of cuckoldry
The female lays between 3-13 eggs from the beginning of May through July and incubates them alone, although both parents raise the chicks. In most years the pair will raise two broods. Second broods tend to have smaller clutches.
The eggs are white with red spots. The female undertakes all incubation duties, and is fed by the male during incubation. The bird is a close sitter, hissing when disturbed. The timing of hatching, which is best synchronised with peak availability of prey, can be manipulated when environmental conditions change after the laying of the first egg by delaying the beginning of incubation, laying more eggs or pausing during incubation. The incubation period is between 12 to 15 days.
Chicks are fed by both parents. Both parents provision the chicks with food and aid in nest sanitation by removing faecal packets, with no difference in the feeding effort between the sexes. The nestling period is between 16 to 22 days, with chicks being independent of the parents eight days after fledging. Feeding of the fledgeling may continue after independence, lasting up to 25 days in chicks from the first brood, but as long as 50 days in the second brood. Nestlings from second broods have weaker immune systems and body condition than those from first broods, and hence have a lower juvenile survival rate.
The nests may be raided by woodpeckers, squirrels and weasels and infested with fleas, and adults may be hunted by sparrowhawks. The great tit has adapted well to human changes in the environment and is a common and familiar bird in urban parks and gardens. The great tit is also an important study species in ornithology.
(Source: Wikipedia)

In Estonia the great tit is one of the most common and numerous birds, the number of breeding pairs is estimated at about 300 000 to 400 000 pairs, winter abundance at about 0,6 to 1,2 Mio. individuals

During the winter months we were able to watch the doings of great tits at the winter bird feeder in Otepää - viewtopic.php?f=54&t=803
Now, as the year slowly gets warmer and spring has come, we will be able to follow the nesting of great tits.

A fourth nest box camera has been put up:
JW-Player: http://pontu.eenet.ee/player/tihane2.html
VLC and Android: rtsp://193.40.133.138/live/tihane2
“One can measure the greatness and the moral progress of a nation by looking at how it treats its animals” (Mahatma Gandhi)
"You can judge a man's true character by the way he treats his fellow animals" (Paul McCartney)

First clutch seems complete with 11 eggs and breeding has started. 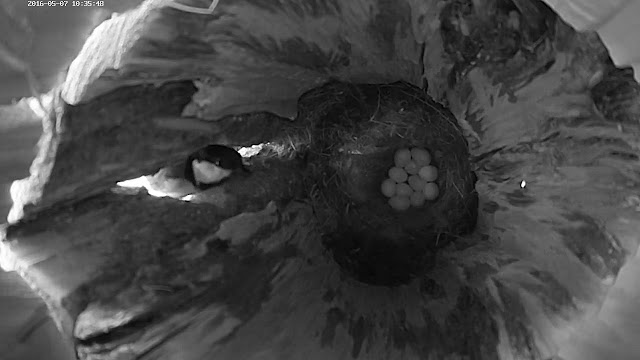 June 3 - 11 chicks left their nest box for good, unfortunately unseen by the web cam due to a transmission interruption

Second clutch seems to be complete with 8 eggs. Breeding has started. 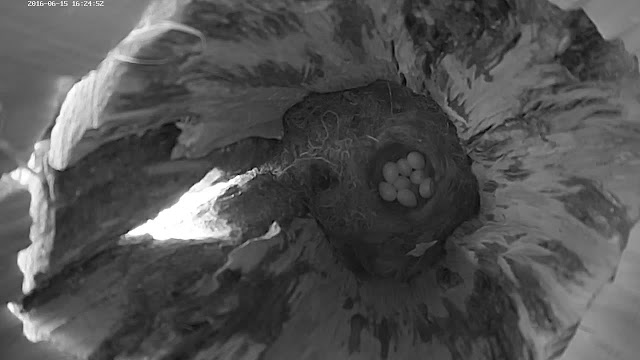 June 24 - hatching of the first chicks started in the evening

Last time all 7 together in the box: 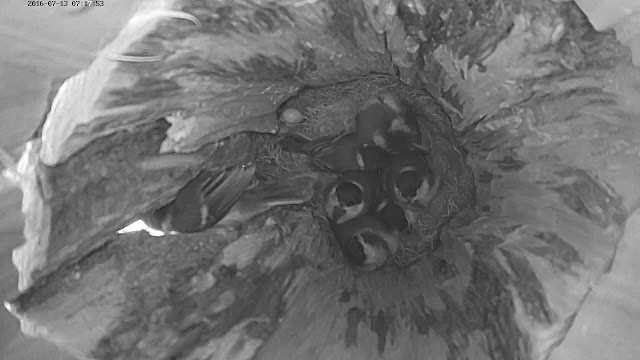 July 13 - between 7:22 and 7:40 (camera time) all seven chicks left the next box
“One can measure the greatness and the moral progress of a nation by looking at how it treats its animals” (Mahatma Gandhi)
"You can judge a man's true character by the way he treats his fellow animals" (Paul McCartney) 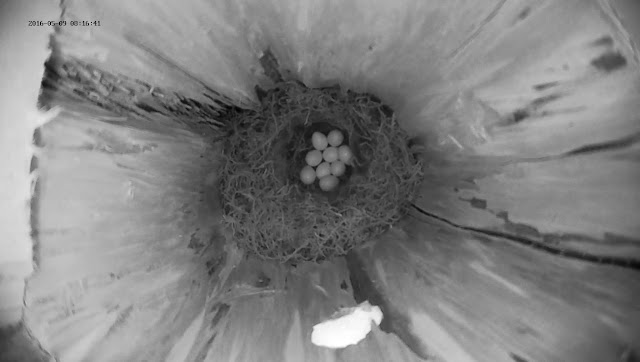 May 18 - the chicks started hatching

June 6 - 9 chicks left the nest box during the morning

The great tit was not seen anymore after May 12, the egg left in the box.
“One can measure the greatness and the moral progress of a nation by looking at how it treats its animals” (Mahatma Gandhi)
"You can judge a man's true character by the way he treats his fellow animals" (Paul McCartney)

Looks like the little guy settled down for sleep, like in the little video has put on a "sleeping bag" http://www.looduskalender.ee/en/node/25415 -

It is a fluff ball with tailfeathers 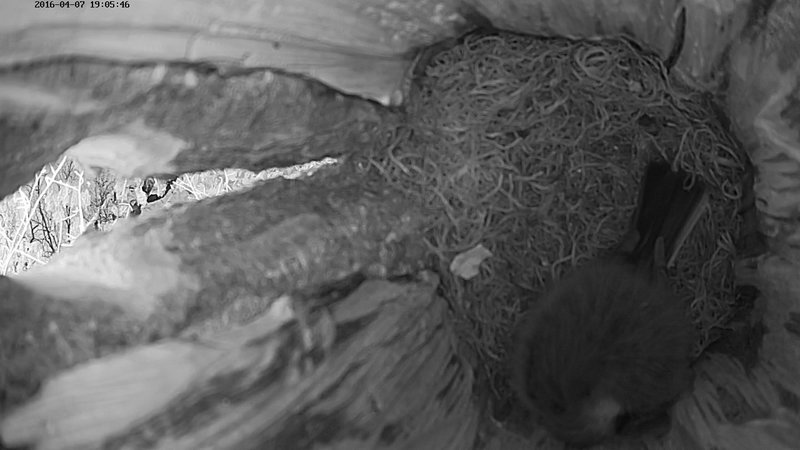 Owl Cam turned into the Owl´s Potential Prey Cam?
(Just a bit of black humour. I wish the little guy all the best.)
Top

Soon we will change the name of the stream and close http://pontu.eenet.ee/player/handkakk.html
Top

thank you Renno for the info.
Top

Thank you for this Cam of little birds! 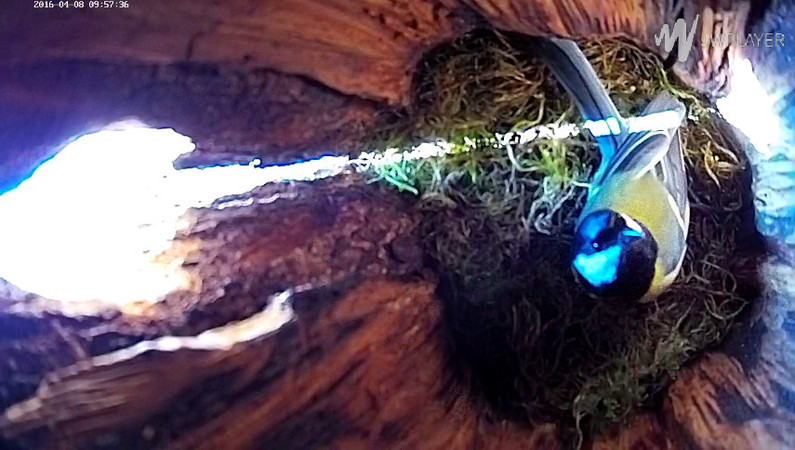 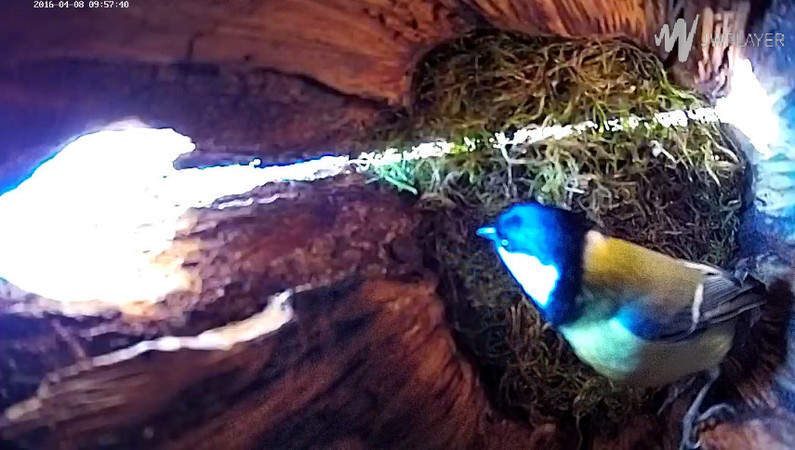 Soon we will change the name of the stream and close http://pontu.eenet.ee/player/handkakk.html

I will open a topic for the great tits in the afternoon, when I am at home from work

Somebody is going in and out, but the light is not enough to really see much

first nest box control, clean up the feathers and then sleep....

Oh, very nice, this nest box for great tit breed! Thank you!
In my garden I have also two nest boxes for tits, so it is very interesting for me, to watch the nest life from indoor.

The great tit is sleeping 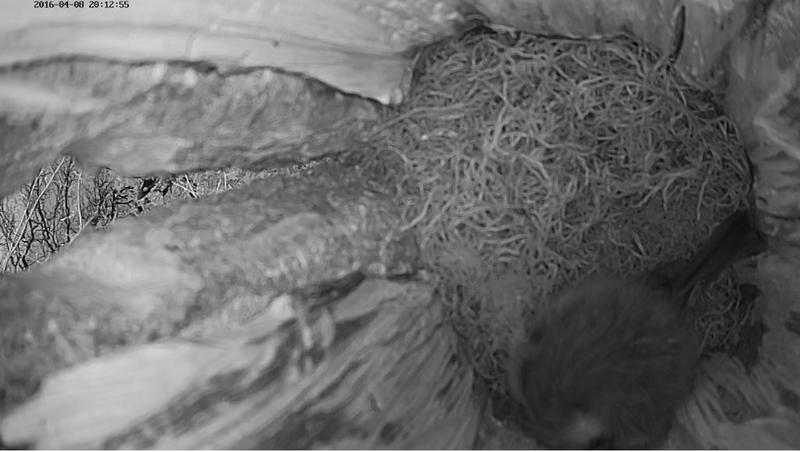 *Only two things are infinite, the universe and human stupidity, and I’m not sure about the former.* Albert Einstein
Top
Locked
922 posts