Virsis, a Golden Eagle male, and Spilve, a newly-mature female, breed in their artificial nest, which was installed in 2010. Most recently the eagles successfully breed here in 2016. The nest is located in a bog on an island managed by the Latvian State Forests. (There is no information about the exact location)

Incubation period is said to be from 41 to 45 days. It is possible that both chicks will fledge. It has happened in 8% of cases where nests have two eggs. So it is rare, but it can happen.
Top

Marfo has provided the following information. Many thanks, Marfo!


Spilve, female, with dark eyes on the left and Virsis, male. 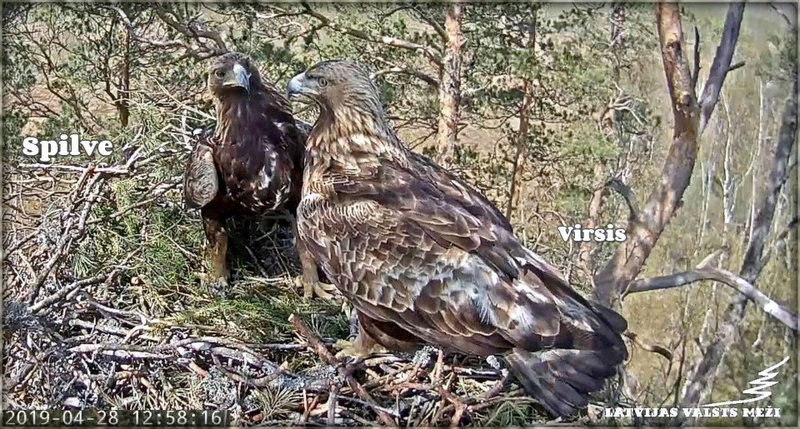 This is an artificial nest built by Uģis Bergmanis and is located on an island in the middle of an untouched bog in Latvia in 2010. The nest is regularly inhabited, and in 2016, a golden eagle was born there. The male Virsis has been keeping and building this nest for years. The last three years several females visited the nest but no eagles were raised. Last year a female (Spilve) appeared regularly but she was too young to breed. This year she is mature and hopefully the pair will breed.

Uģis Bergmanis is biologist and owner of a wild bird rehabilitation station. He is also a researcher of small eagles in Latvia and Europe.
Top

Count-up timer for the first egg.

Spilve stays in the nest overnight,be an egg soon

No egg yet. But there is hope..

15:22 Virsis flew into the nest, looks up, protects the nest!

15:22 Virsis lands on the nest calling loud and waving his wings. Is there a strange bird around?

Spilve in the early morning in the nest - completely unspectacular, without egg and without mating - but wonderful morning voices and noises.
someone flies around Spilve and lands in the tree. Black grouse and cranes can also be heard.
almost forgotten: at the beginning of the video, 15:15:51 to hear: an eagle chases geese. 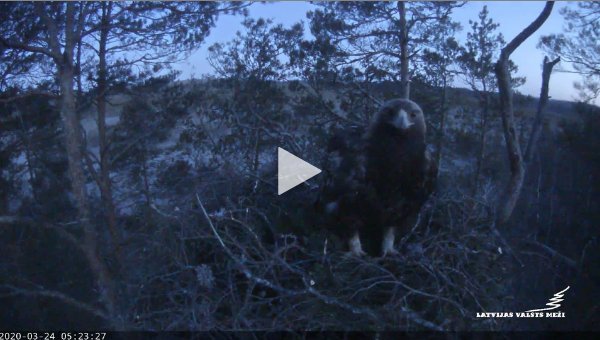 Spilve in the early morning in the nest [...]

with pleasure!
currently i don't watch much live streams- this morning it was wonderful with Spilve in her nest - but I like reading the reports from all of you.
Many thanks

, I can’t see the video on Streamable, but I know how beautiful they are! So I took a few Virsis shots this morning.

Virsis came at 6:46 and stayed a long time standing and looking attentively at something very interesting happening below the nest. Now and then there was a sound of branches breaking. Later he was just staring.
He flew away at 8:30, he didn't lie down once.

Meanwhile grouse were heard, starlings, a buzzard and a heavy vehicle or old airplane. 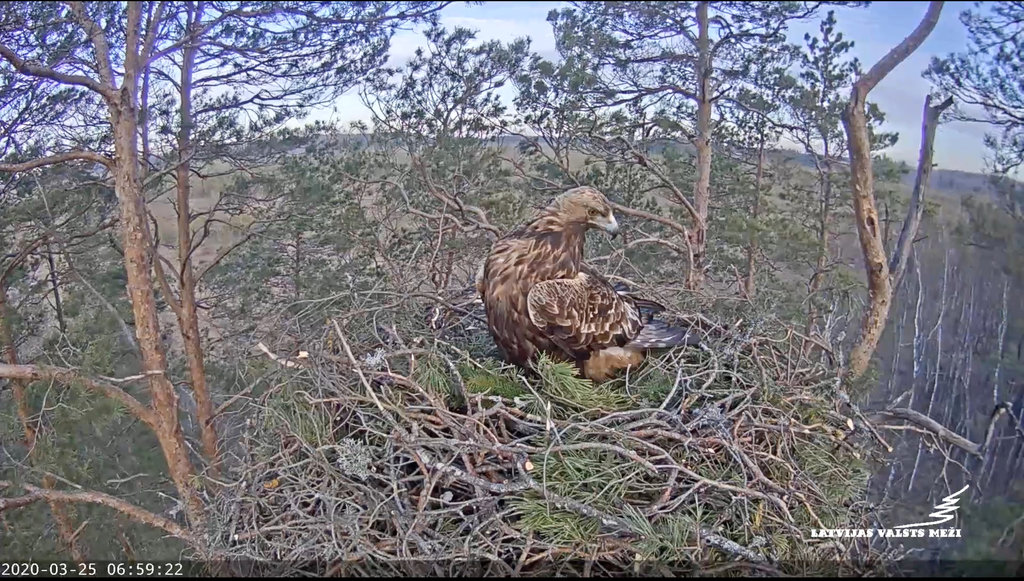 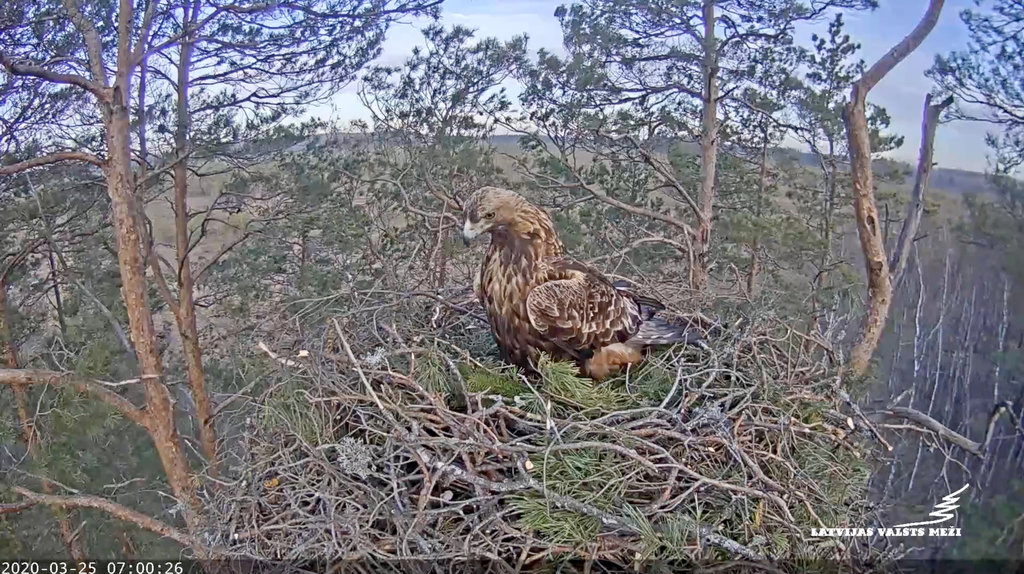 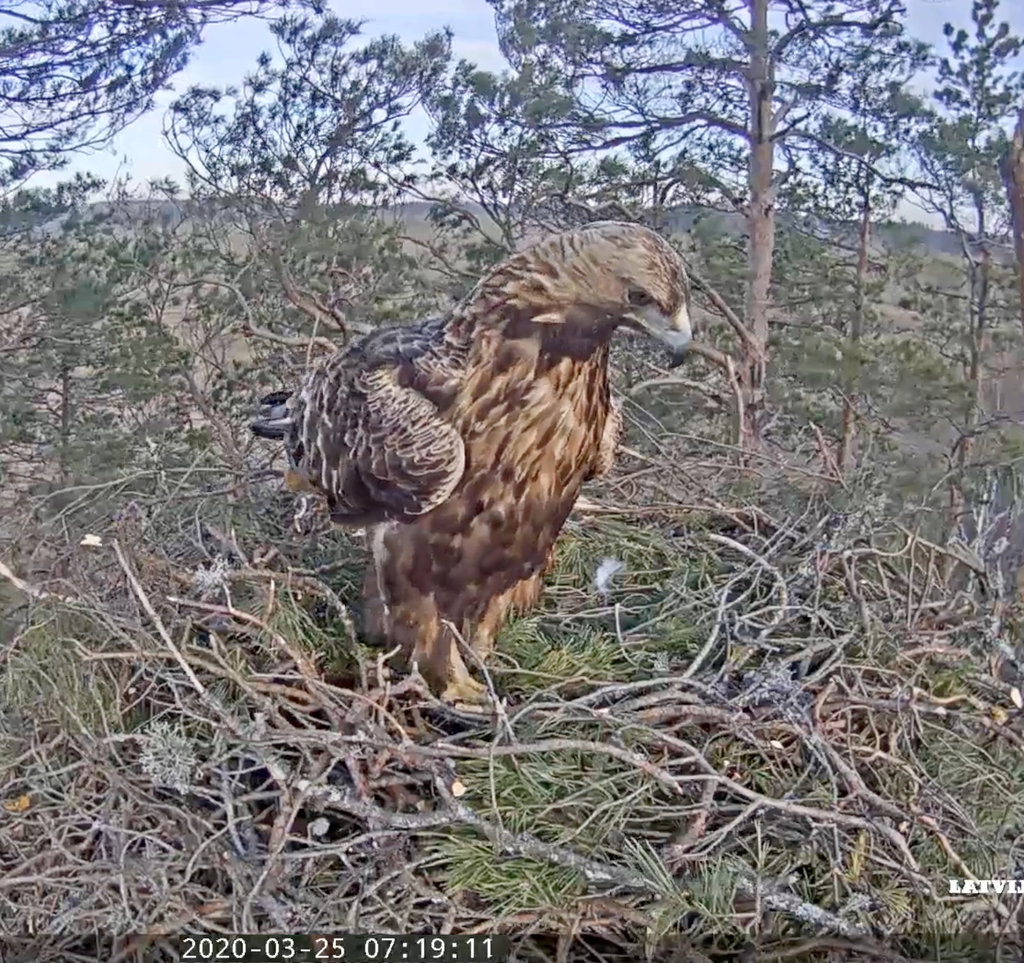 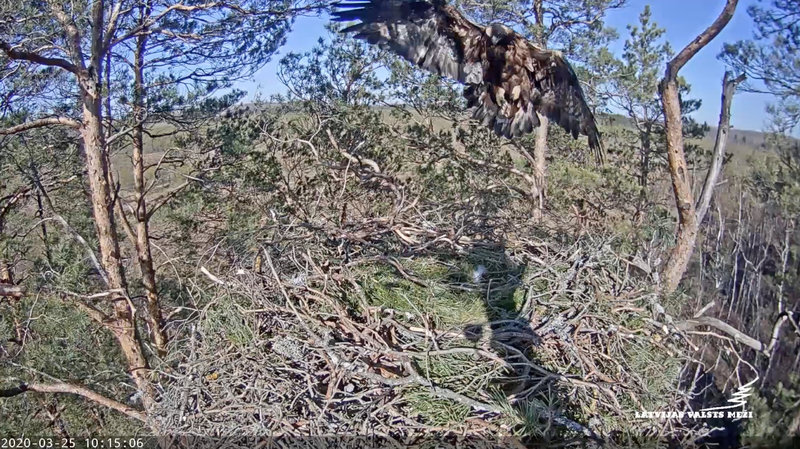 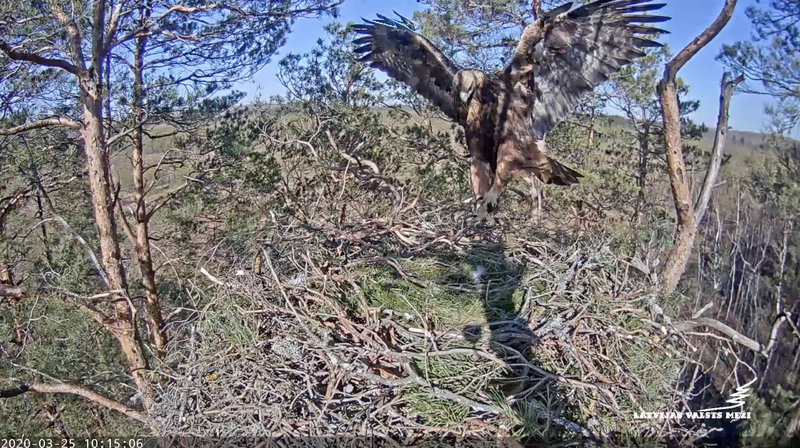 11:53 Virsis came in, calling
And Spilve too!
Virsis left again and Spilve laid down. 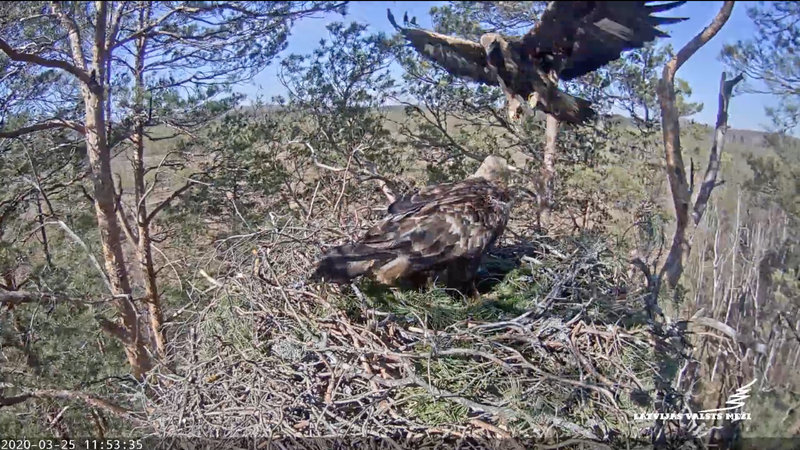 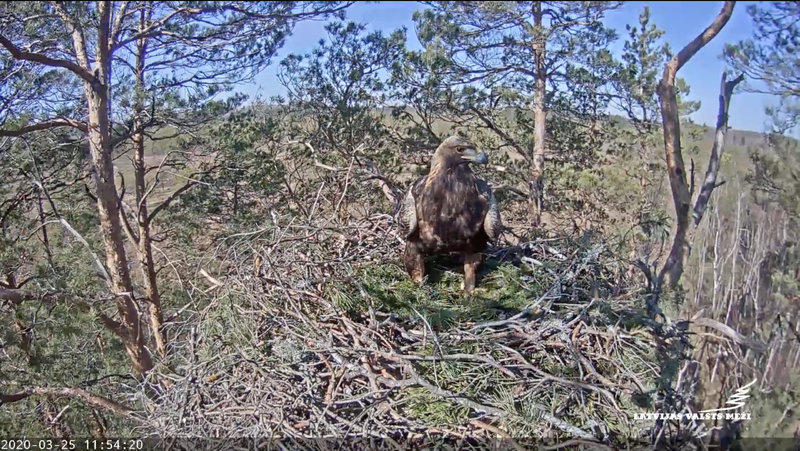 12:03 Virsis flew in with a branch.
He took Spilve's place and she went to the branch.
So no egg for now... 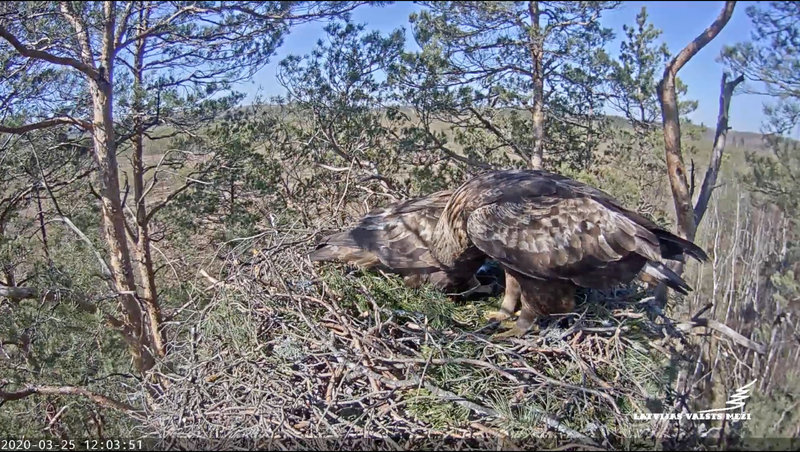 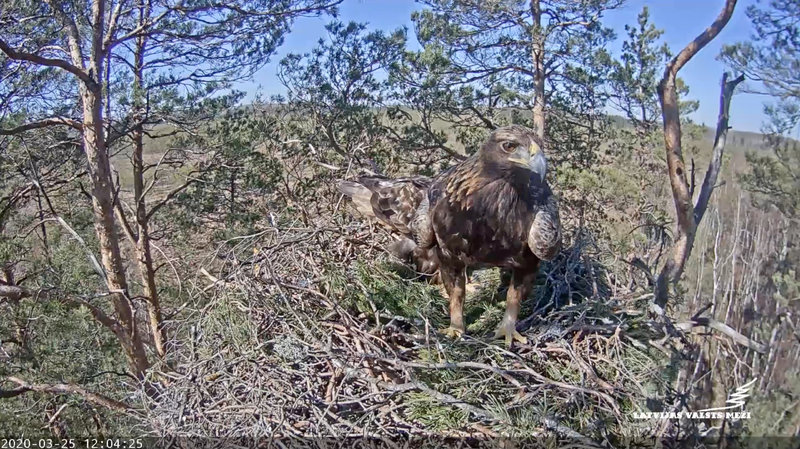 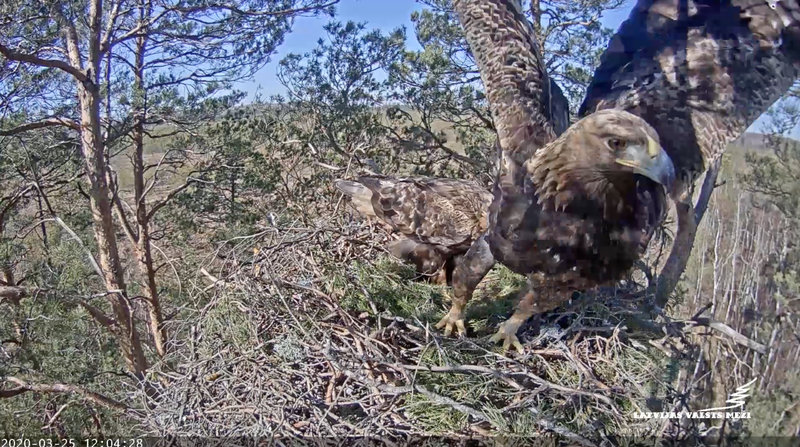 7:05 Spilve comes to the nest and lies down. 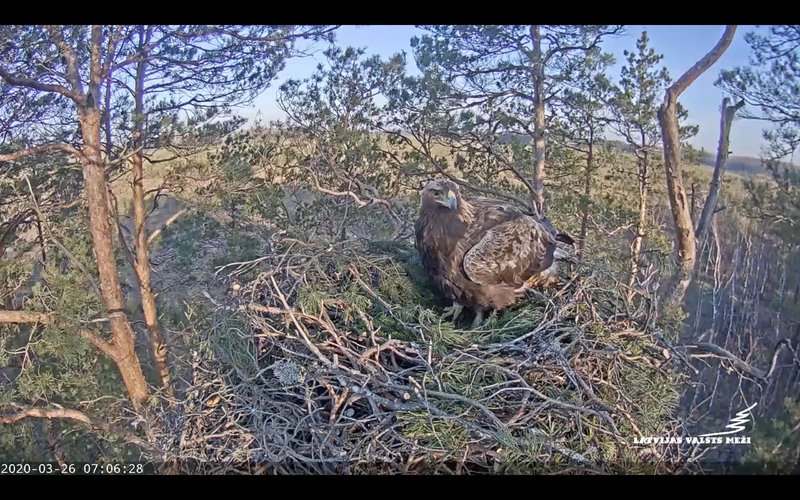 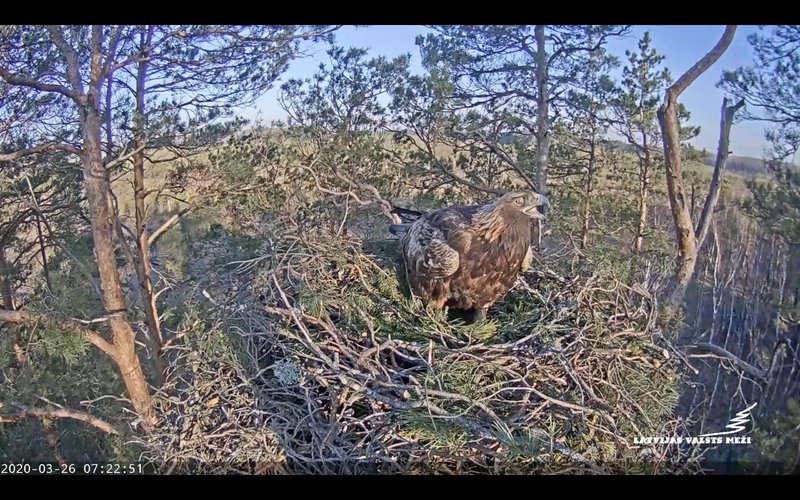 8:37 Spilve flies in
Virsis calls in the distance.
8:40 Virsis comes with a branch 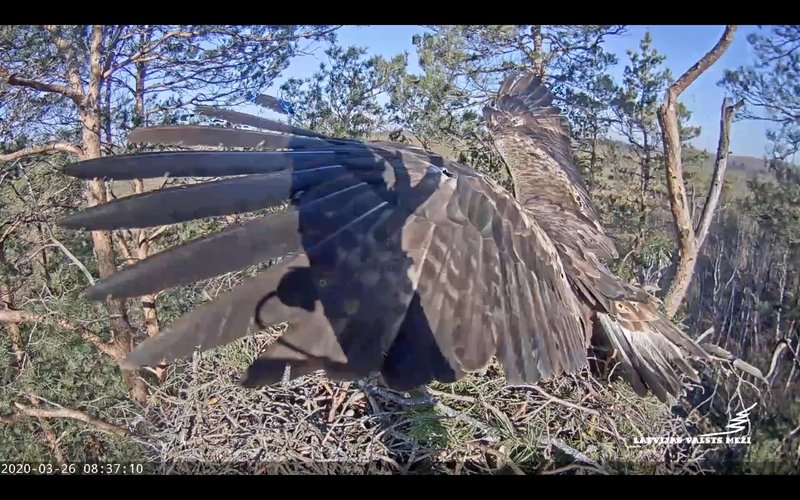 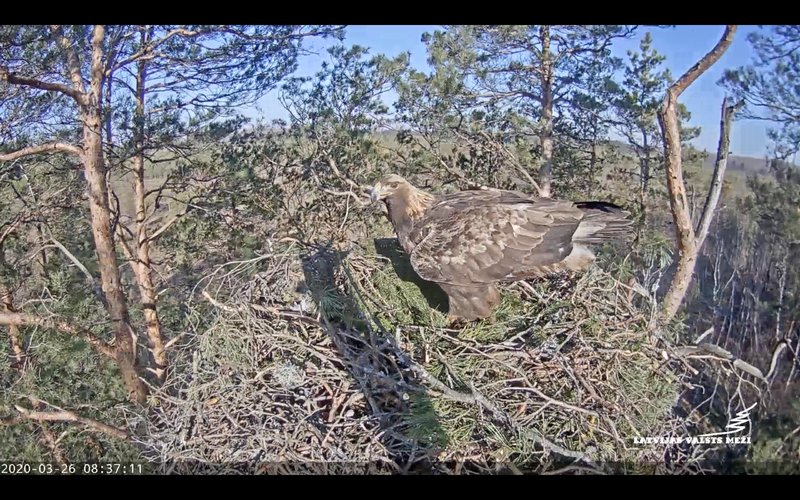 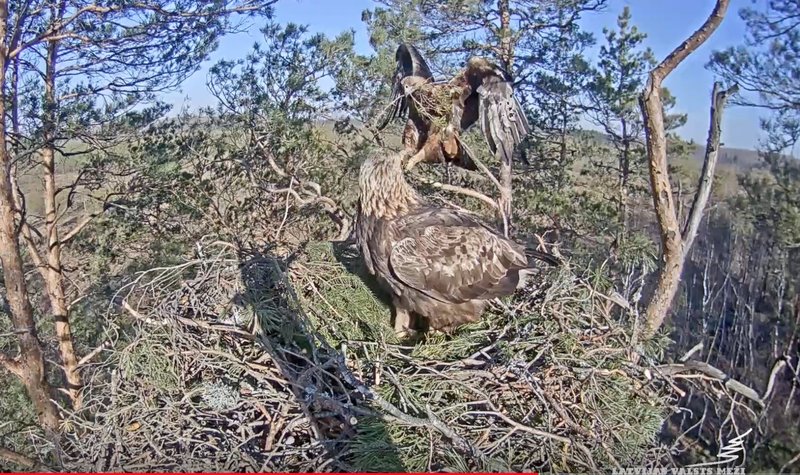 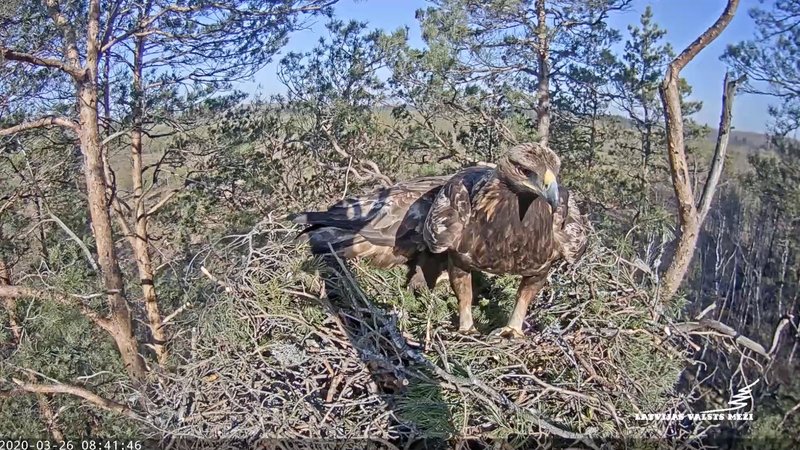 9:26 Virsis comes 'stumbling in' with a branch that is very long.

When he lands it looks as if he is pierced by it.. Its is stuck between his wings and his tail. He struggles to free himself. 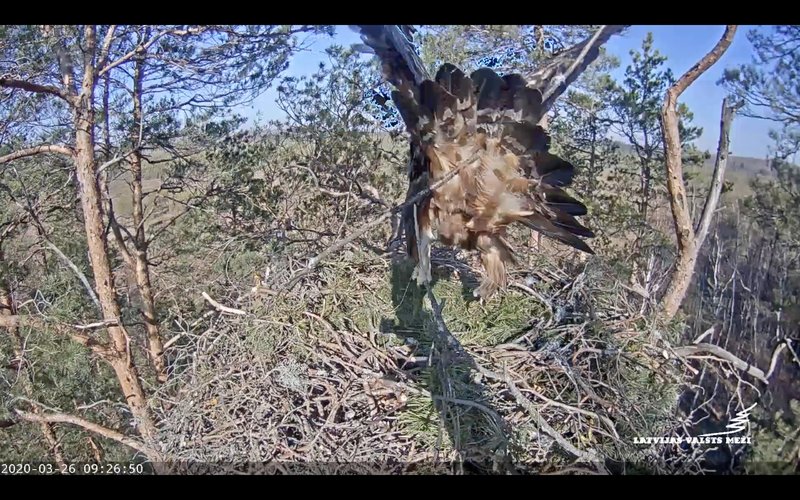 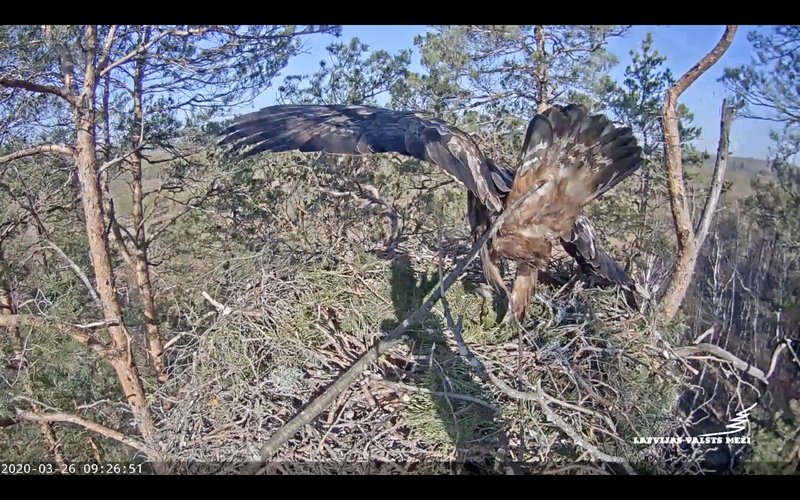 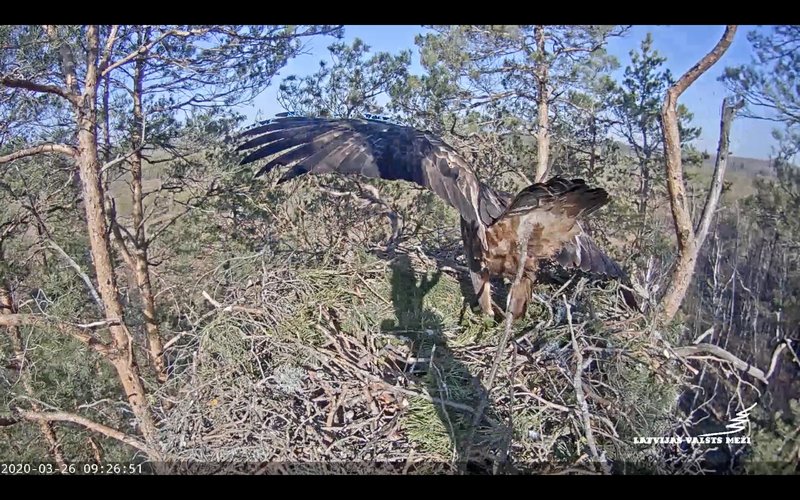