That's the way it is with Goshawk ... a little is sometimes a lot.

Goshawk are said to be loners outside of the breeding season. I don't think that the Mini-H's will be taken care of anymore. H44 and H21 are far too fixated on their territory. Either they still have 'residual hormones' or the theory is not always true. Under good climatic conditions, you can get into a courtship again as early as November. That’s hardly worth mentioning ... it’s going to happen soon and this couple obviously hasn’t even broken up.

Ps: for the first time this year I hear a cricket chirping next to me ... it's September.

Still in the evening:
20:02 A flock of crows is approaching the area. They're loud, screeching.
A crow seems to fly into the territory (you can hear it.) - our H's are not amused.

06:13 You can clearly hear movements in the undergrowth and the morning call of a Goshawk.
06:21:20 From a low position, a goshawk flies into the left group of trees, shouts. Further calls from both H's follow. Everything until 06:22:07


06:57 to hear crows and Goshawk shouting. Probably independently of each other.

H21 seems to be doing morning exercise in the trees. You can always hear a crack in the branches.

Which H are you? 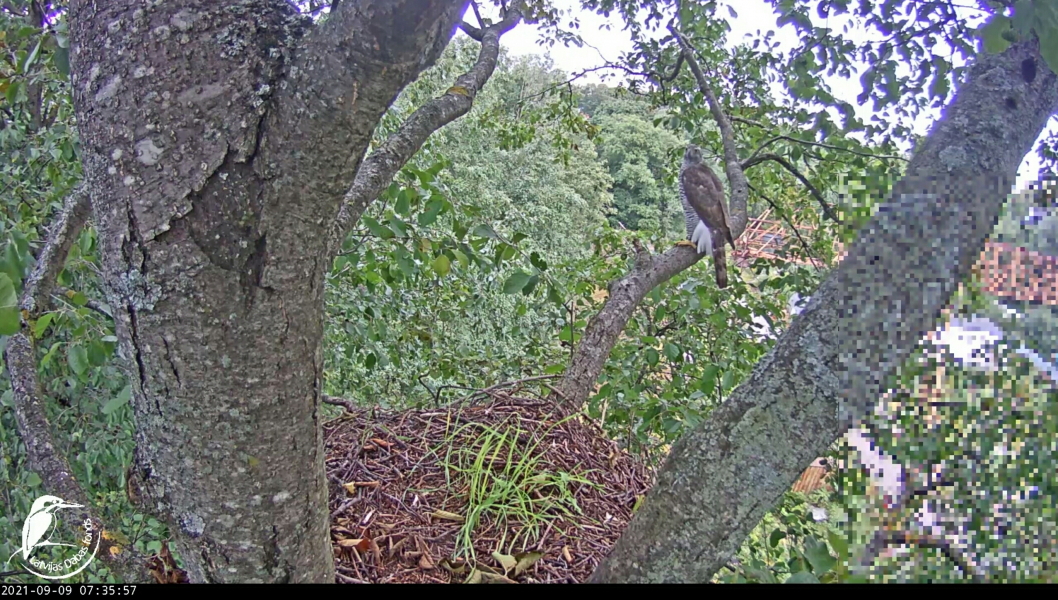 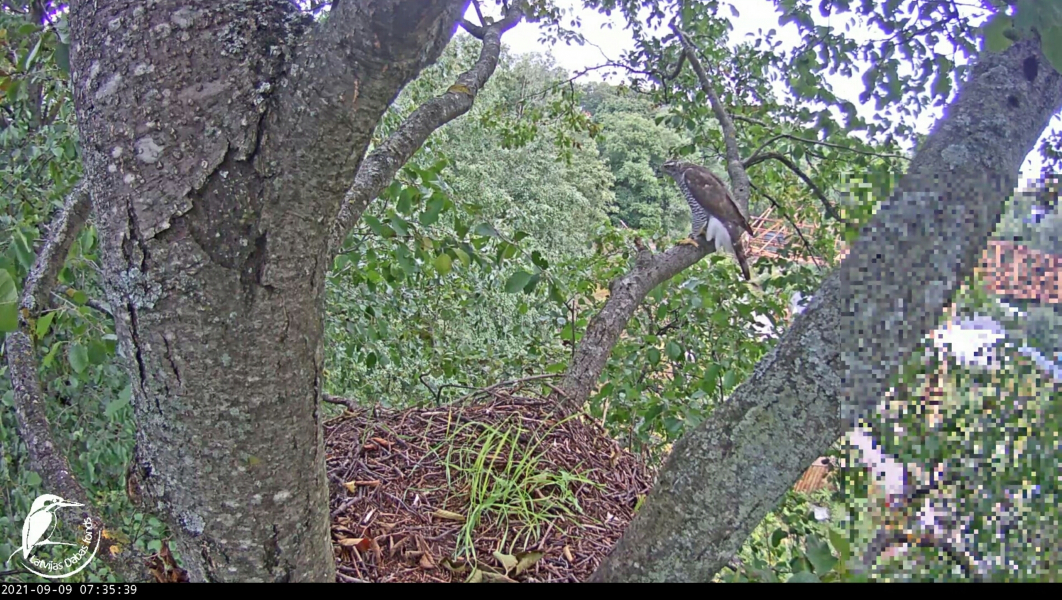 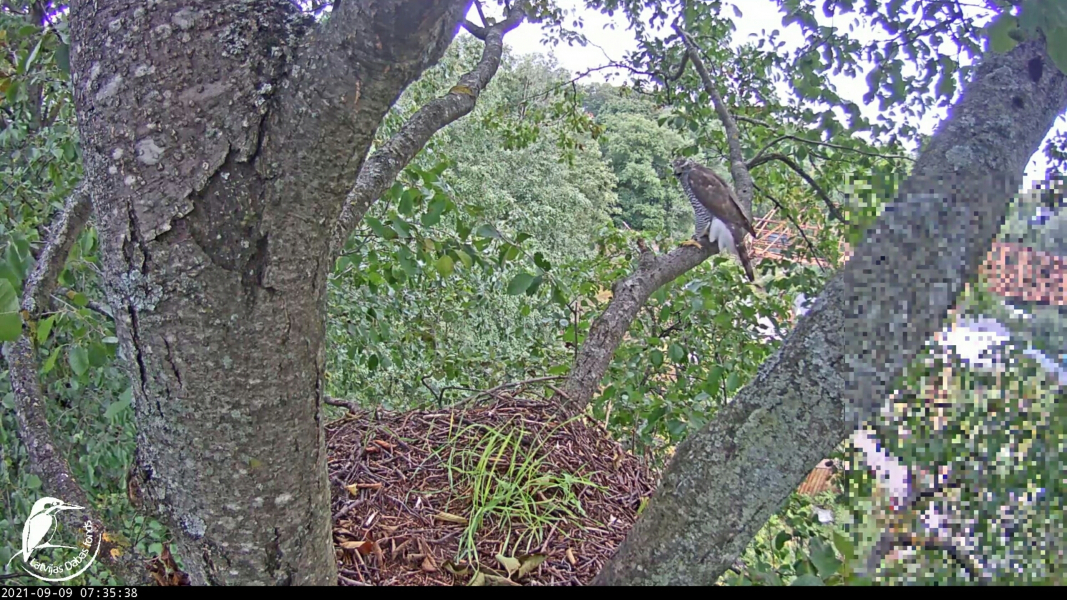 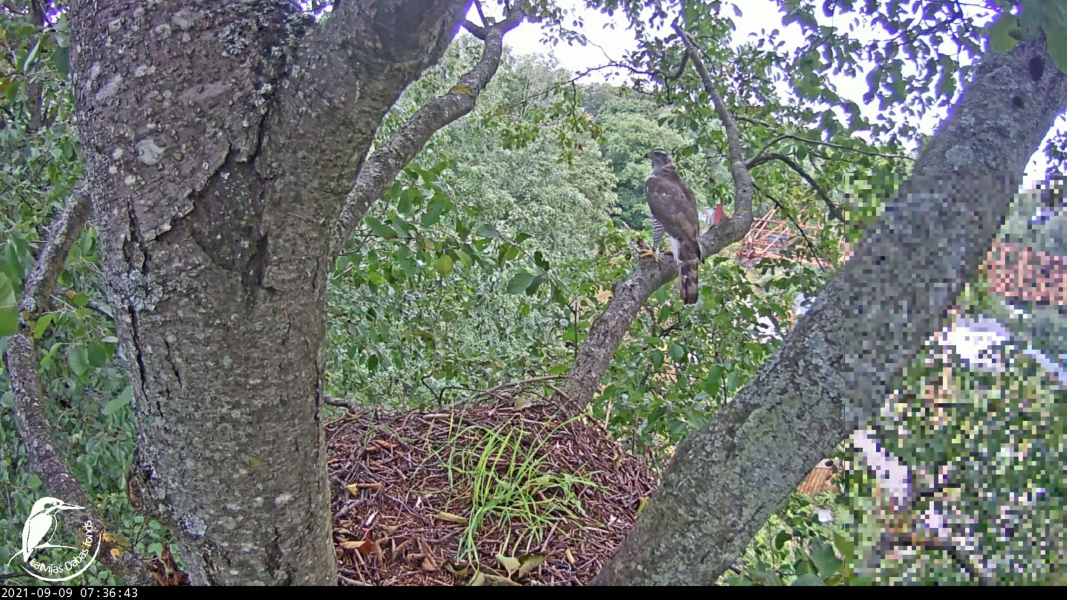 I am very insecure, but I tend from the agile movements and the light voice to H44.
Only my legs seemed very long?

This next situation seems a little strange to me.
At first I was amused - the sound had a bit of a jungle feel to it. However, I'm not sure if H21 was comfortable. She sounded like she was threatened.
Hm, I have to listen to it again myself. I also leave open whether the other Goshawk is H44. I'm not sure about that.

But it stays calm ... nothing happens anymore.


Can it be three goshawks?

I listened again. In my opinion H44, H21 and a Juvenile!
"Let nature be your teacher."
(William Wordsworth)
Top

H21 doesn't seem enthusiastic about the idea that the offspring want to move back home. H21 is audibly annoyed.
I think there will be no breakfast for the guest.

10:50:38 H21 (I think) retreats back into the area. Their calls are getting quieter.
"Let nature be your teacher."
(William Wordsworth)
Top

The juvenile seems to be on the move.

I hope the little one will find its place. There is no place for him here.

11:39:56 A crack can be heard - H21 landed in the tree?
She starts calling. The juvenile's voice sounds more distant.

It will take a few minutes again. Currently I'm at 12:05 am and the conversation is still going on ... and while the hawks are arguing, tits and finches are playing in the nest tree.

I have to go to work so I can no longer watch the day.
Too bad it's very interesting right now. Maybe someone can help.

Two individuals continue to call as if answering each other, they seem to me H21 and another with a slightly more scratchy tone (young?), The elongated sound followed by the ki -ki and sometimes ending in "a single gjack". The two. They have moved somewhat and then H21 (surely) approaching the nest. At 12.20 it seemed a sound closer to that of chickens in its tone.

You may be marking your territory in front of other individuals.
Then there is music that covers some possible more distant sound.

Polly wrote: ↑September 7th, 2021, 1:55 pm Well, I don't know the reasons why the Goshawk receives this special attention in Riga. I don't read that deep. In other words: it is more of a coincidence to come across informative and detailed reports.
It was the same with Bubo. It's hard to find out about eagle owl in Latvia. The hunt, the population ... current figures and why there are so few occurrences. Or what is being done about it. There are only general and old reports. Or I've come across terrifying and disgusting sites. (Hunting sites, hunting tourism and illegal animal trade in birds of prey)
Instead, due to failure and exhaustion of the technical resources, the camera was removed from the nest without further ado. (and the subject was locked.)
Goshawk, too, are sometimes removed from the nests as chicks and sold to falconers.

The fact that for seven seasons there have been cameras in Goshawks nests I think is a lot. Four of them with young, one with failure of the pair and two without young.

Bird Atlases have been made four (two national and two European>) and they were compiled in a publication. (1980-2017) :

In species such as raptors and other protected species, it is difficult to provide detailed data and reports beyond total numbers. There may be partial reports of Spaces or Parks.

As for the prosecution of crimes, I do not know how the issue will be in Latvia or which Agency is in charge of it or who warns in case of observing them.

Sure there are cases like the ones you announce that I imagine some of them will be illegal.

I do not like the free killing of living beings, there are enough already with natural deaths to which are added the abuses, pesticides, uses of agricultural space, fires, etc.

I am not justifying these actions but it is difficult to end populations due to isolated cases, although it hurts us a lot.

Emiliano, thanks for the link.
My thoughts are somewhat detached from the hawk to look at.
For many people, webcams (forums) are pure fun, a pastime. However, there are also many who bundle good observations and (insider) knowledge here. So places like this make sense! It is a good place for knowledge to give and take. We have great, tireless members here and walking encyclopedias such as Hellem ....
However, I would like the Latvian / Estonian ornithologists to give us some input from time to time. And if it's only a summary once a year. Gladly for any topic - osprey, black stork, eagle owl, small eagle etc. About existence, occurrences and habitat, measures. We only look in front of the camera. We are certainly also interested in the look behind it. So definitely me.
Simply to stimulate thought and not just look at pictures.
We not only need colorful pictures but the uncomfortable connections that lead to the collapse of nature in order to reach more and more people. The hunting, agricultural and tourism lobby is still free hand. Their interests are far above the protection of nature. How often do we hear shots outside the hunting season ....

We are often left with unanswered questions that locals could answer quickly. Could explain. That was my little rebuke ...

Emiliano, thank you for your report from yesterday!

Unless I accidentally got away from the camera at an important time, it has been a quiet morning so far. Although calls are distant, there are no activities in the vicinity.
Closer calls only : 08:15, 08:33

And a jay with the song of the goshawk.

10:12 H21 can be heard in the area.
I was still happy about the clear call, but then it goes quickly.

10:12:46 A Goshawk flies from the left forest in an arc towards the tree and lands on the upper branch, calling. He gets an answer from the area.
He sits and sits ... very relaxed. Cracking can be heard in the undergrowth. 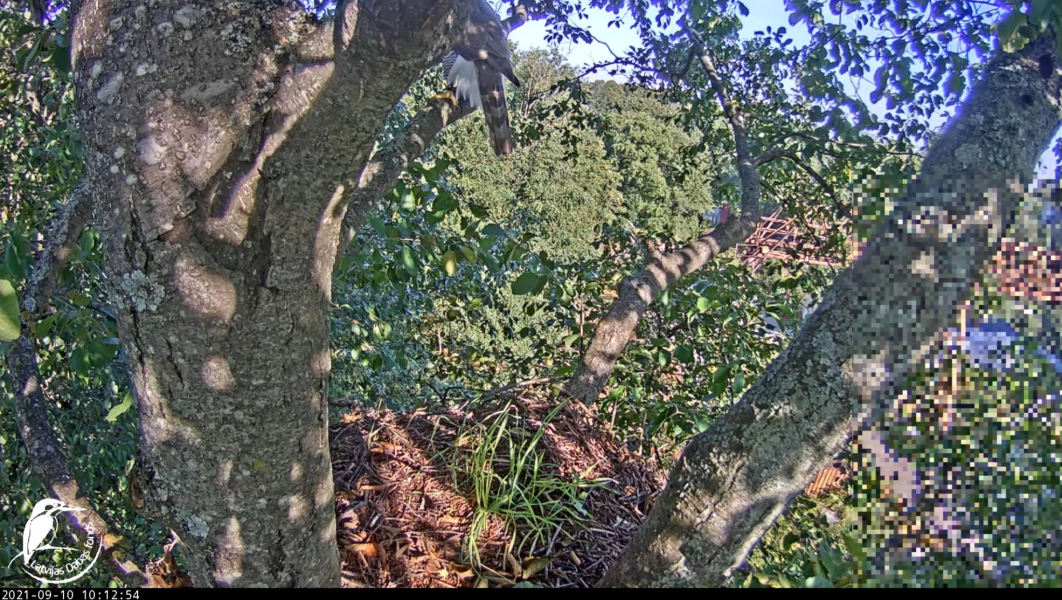 10:13:05 A goshawk flies below the nest towards the forest on the left. The goshawk on the branch follows him with eyes - and 'Gjak'. I can be wrong, but as so often this Goshawk identifies for me - H44!

10:15:29 H44 leaves the branch down into the area, calls out briefly.
Shortly afterwards, further calls can be heard in the area.

Although much closer , that was the tone of one of yesterday's , but we have not heard the long calls to H44 all season seeing him as H21 and his gjack repeatedly , H21 very briefly.

It may be wrong and it is H44, which would confirm the rapid feather change in the months of July and August with approximately between 14 and 15 months , which we barely saw by the nest.

In the same way , Imants Jakovlevs' appreciations may be correct , which is why I excuse myself from my comments for doubting.

We are losing shape!
Top

I do not think so.
I find it instructive and very pleasant to err together.

We don't have to be ashamed - at least I don't!

We weigh up situations and put thoughts on the scales. Often we decide intuitively and I don't feel that we are responsible for what others understand. We don't pretend - we guess. There is always a difference. Everyone knows that we are not ornithologists.

And we're seeing H44 in her first adult dress for the first time. Got stronger ... stately. It is a blessing to see the development of the H's.

Let's just be happy and don't hesitate to doubt !!! Everyone can see and observe for themselves and form their own opinion.
In our own words, we offer timestamps, images and videos (that nobody sees) ... everyone can understand everything at any time.
And correct us.... .I have often even asked for it.
But well ... we will probably stay here alone.

So continue unrestrained on the Emiliano path! Better to be wrong than not interested at all.

I was gone for a couple of hours.

Well, over and over again I thought I had heard angry shouts. But it could not be clearly determined. So no time stamp.
"Let nature be your teacher."
(William Wordsworth)
Top

They can also be seen briefly when they fly around the nest tree.