Today the wind is stronger than yesterday 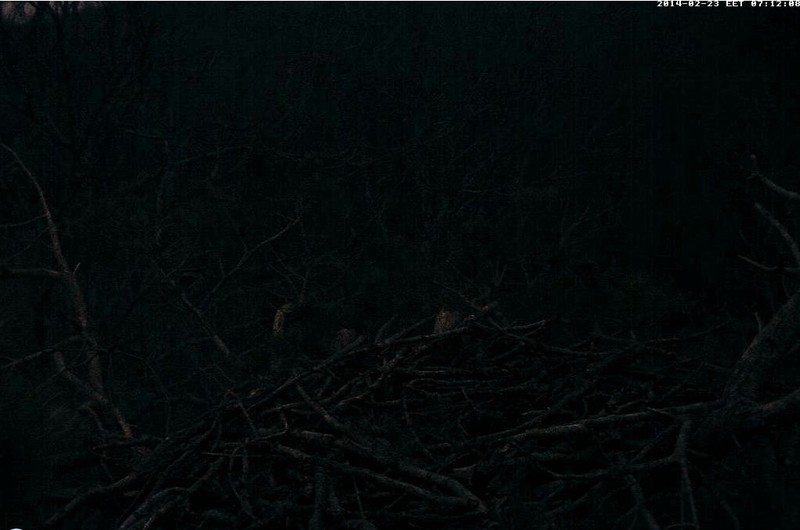 Good morning and a nice sunday

The camera turns on and off.

my camera does the same. now there is maybe too little power in the battery. (the gmes have not started yet).

it's clody and windy. a great tit is teeting nearby a bit lazily.
Top

Good morning everybody together! An honest question: Who of you still thinks seriously that Linda and Sulev will appear this year in this nest?
Top

i think it is possible. for example in 2010 they started late: the first egg was laid on March 21st.

i was looking at the old data yesterday. in that spring even a strange eagle couple came to the nest in the evening of March 19th and it seem that they stayed there over night. in the previous spring a strange eagle or even two visited the nest when Linda already had her first egg there. last spring there was a lot of eagle traffic at the Juras-Erglis nest. and here there was a young eagle who visited the nest (too often to my opinion and i think that Linda agreed!)

so who knows what will happen here? -but i must admit that i really would like to see them here, as soon as possible!
and for to be able to see them the camera should stay on. so we need sunshine, too. i think that would also bring some romance in the hearts of Linda and Sulev.

Last years laying eggs seemed to be so early for me. And there was "only" one hatched egg - so maybe it is a good decision from Linda and Sulev to wait a bit longer .... but I agree --> it would be good to get a glimpse of them on the nest here.
Nature does nothing in vain (Aristoteles)
Top

yes, it was earlier than most of the others... 2009 was an early year, but the others have been later. also in 2011 when they decided not to use the old nest they were seen there in March. first they were there on March 11th and then on 16th and 17th. the last time they were seen on March 20th. i think that actually we are being early, watching the cam over the winter, rather than them being late.

i think that the beginning last year was rather hard for them in the food department. the sea was frozen and they had to fly far to find food. Sulev is an excellent fisher but he wasn't able to bring much anything for Linda. before the eggs were laid Sulev brought once a strange piece of some meat which he ate himself, then two fish and a bird and then one fish more. all this, or actually only this in one month during the time when eggs were developing in Linda!

it took almost a month more before fishing really began on April 6th. before that Sulev had to bring what ever little he could find, among the items the strange black flap which looked like a piece of tyre or boot bottom (it could have been a beaver's tail, too. maybe Sulev found a carcasse of a dead beaver). mostly they both probably had to fly far to open waters by the real sea.
Top

Thanks for your appraisal, you two! Anyway, the only thing, we can do, is wait and think positive. One of my easiest exercises.

the camera stopped rather early today. the last Pontu picture was recorded at 17:38. and it wasn't nearly dark yet.

i have something from the old Pontu archives when i ws looking for answers to some questions which have been bothering me. nearly four years ago at the old nest two strange eagles were captured in Pontu pictures on March 19th in the evening and then on the next morning. i dug up the videos and had a look on what was going on there.

in the Pontu pictures from 2010 one can see that in the evening on March 19th 2010 there was a strange dark-eyed non-mature eagle at the nest. to my surprise i found out in the video that there were two eagles who flew to the nest. the other landed on the big branch on the right, out of sight and it stayed hidden there almost all the time. at one point the youngish eagle got up to the branch and some courtship-kind of voices could be heard. i don't think it was any successful mating though. after a while the youngish eagle came back to the nest and finally got up on the back branch. it stayed there until the camera went off that evening. there was no sign that the other eagle from the right flew away either. i htink they stayed at the nest all night.
here's a clip (so this is an old video from 2010):

in the next morning on March 20th when the camera started at 6:38 there was another eagle in the nest, a mature-looking female (jugded by the her behahiour later that morning). another eagle was sitting on the back branch.

after a while the eagle from the brach came to the nest and began courting the mature-looking eagle. the second one was the dark-eyed, non-mature eagle who was trying to make eagle-love to the mature-looking eagle. he pulled her feathers both on her neck and her tail but was nearly-violently rejected by her several times before he understood that she did not like his approaches. the younger eagle returned to the back branch...

then suddendly the two eagles left one by one and another pair of eagles arrived at the nest, calling loud. the latter two were Linda and Sulev. they really weren't happy to see intruders at their nest.


after a while Linda jumped to the nest... she was still a bit upset.


and after a while Sulev took off from the branch. Linda stayed at home and calmed down gradually.


these events were recorded only about 35 hours before Linda laid her first egg that year. it was so early in the morning that no-one was watching the camera yet, just like in the previous evening no-one was wathcing the camera anymore. hardly anything goes by Pontu pictures without being noticed. still the Pontu pictures show only glimpses of what has been going on. luckily the videos are also saved.

i think that these events also demonstrates well how quite unexpected things may happen here at the nest.

i think that it is Linda who decides in the end where she wants her nest to be. Sulev only carries the heavy furniture.

. . the Independence day of Estonia!

the camera seems to sleep again. it turned off yesterday 'too' early and today it hasn't even tried to start. it has been too cloudy again, though there were two sunny spells yesterday.
Top

Thank you ame for these really wonderful videos - I loved the last one with linda in the nest. It makes me really miss these two eagles and I so hope they will come and nest here so we can see them again. Your comments about previous years show us that their 'patterns' are their own! so we have no real idea what to expect for now!

while we are waiting for this camera to wake up and for to see Linda and Sulev back at home we can watch a new WTE camera in Latvia: Juras-Erglis. there is a nest which is being built by a male wearing Lithuanian rings and a ringless female.

the camera is sleeping....

sunshine is expected tomorrow and halfcloudy on the next days.

the weather data says it's +1 degrees in Silma. in Haapsalu the sun is shining so why not in Silma, too? a new topic for the WTE nest camera in Hortobágy, Hungary:
viewtopic.php?f=28&t=641&start=20#wrapheader

this nest was also followed last year in "Links to other White-Tailed Eagle (WTE) Cams":
viewtopic.php?f=28&t=556

the inhabitants of this nest Emese (female) and Hunor (male) have three eggs in the nest. the eggs were laid on Feb 4, 7 and 11. if i calculated right the chicks are expected to hatch on March 14, 17 and 21 (or there-about) if all goes well.

all the best luck to Emese and Hunor! let's keep our fingers crossed.

no life signs from the camera so far...