now there's only the siren, which 'seems' to be not moving.

and it stopped. maybe it was a burglar alarm in a parked car?


it's a beautiful, sunny but windy day.

yesterday evening i looked through the Pontu pics from yesterday and Monday. on Monday it was a deadcalm day, hardly any wind at all: almost all pictures were identical.

now there's only the siren, which 'seems' to be not moving.

I have missed the WTE calls, too, ame.
The sound of the siren seemed never-ending!
It's possible, that it was a alarm-system of a car...

11:32 two series of eagle calls. i think it was one eagle calling.
i almost missed the first series but there's something here.


for the next call i was prepared so all of it is in this clip .

beautiful, the Eagles are around

ame wrote:11:32 two series of eagle calls. i think it was one eagle calling.
i almost missed the first series but there's something here.

for the next call i was prepared so all of it is in this clip .

for capturing the 11:46-call i was too slow. i think the eagle was further away this time, but i'm not sure. i have turned the volume up to listen to the calls and down again for not to hear the wind.

12:24 eagle calls again and again i was too slow to capture it.

someone is in singing mood there today. 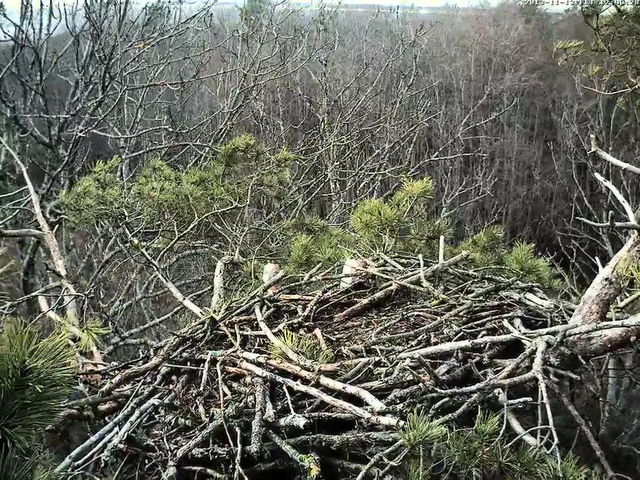 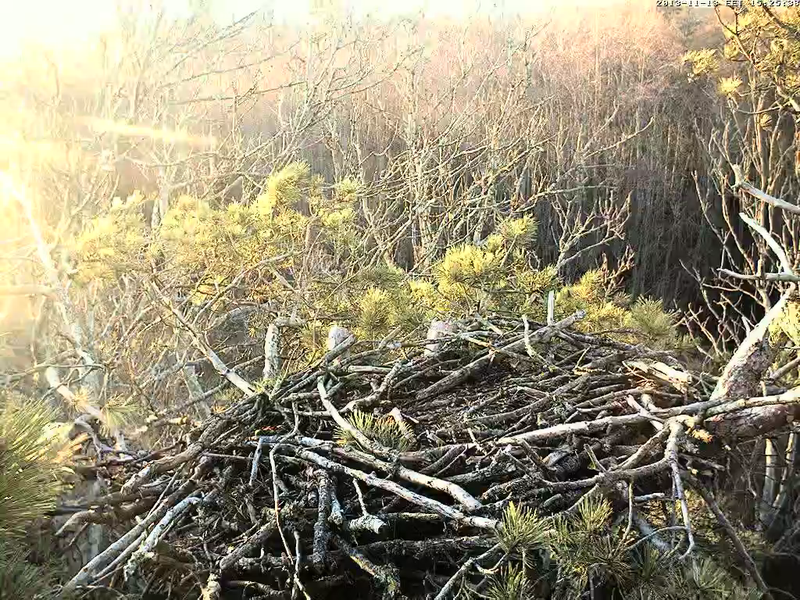 now i had time to check the Pontu video recorded in the morning on Monday, Nov 11th when Laranjeiras and Riitta and Bea heard eagle calls and some some tits investigating the nest.
i made shorter clips of the eagle calls. what is important i think is that we can hear two eagle calling on these clips. my guess is that they were Linda and Sulev.

first at 9:23 together with a lot of goose voices.


and the third calls at 10:09. the higher-pitched voice belongs to Sulev and Linda finishes the song with her alto voice (if they were them as i think).

there were also some hornblows earlier that morning. it sounde like a train's whistle but there are no railways in that part of Estonia, so i guess this must have been a car's horn at 9:32. it made at least two long blows. the blows sounded exactly the same so i guess that the car was parked somewhere. there was no wind in that morning so who knows how far the car was.
http://youtu.be/c936WMtCnkI
http://youtu.be/398_qKkqK0Q
Top

Great, ame,
the fact, that you have gone to the trouble afterwards of taking up the sound of the two WTEs. Thanks.
Wow ...

you can distinguish the voices of Sulev and Linda.
You are almost an eagle-mother - aren't you?

I look forward to next spring with Linda and Sulev.

Riitta wrote:Great, ame,
the fact, that you have gone to the trouble afterwards of taking up the sound of the two WTEs. Thanks.
Wow ...

you can distinguish the voices of Sulev and Linda.
You are almost an eagle-mother - aren't you?

I look forward to next spring with Linda and Sulev.

Riitta! Agree with You, AME almost mother eagle. Nice to hear how they talk Linda and Sulev!

good morning
a lot of bird sounds this morning from Widgeons, Nuthatch and more
Top

be careful with the volume: it shrieks very LOUD near the camera.


Riitta and Gavril, you make me

i'm not sure at all which one, Linda or Sulev, is singing or calling if only one of them calls. it is like if i see only one of them without seeing the ankles (rings or none). otherwise i just try to guess.

Linda is the bigger of them so she has a lower-pitch voice and Sulev as the smaller has higher voice. i like to think of them as an alto and tenor.

i looked up an example of their calls. on May 12 in the morning at 8:42 Linda was at home when she saw something flying above the nest which she had to call at after looking at it for some time. then after a few calls Sulev called at the same bird who then replied to them: a grey heron.
this clip also shows how flexible the neck joints of an eagle are.

another noteworthy point in this clip is that it prooves that parents do stay near the nest even though they are out of sight. i think i've got one or two clips where Illimar was alone in the nest but a parent's voice was heard from somewhere near the nest. so i think that we were sometimes worried about Illimar being alone when there actually was no reason to worry. (but sometimes neither of them was near.


for comparison i looked up a duetto of human alto and tenor singers. i know practically nothing about this piece but it is a good examle for comparing a female alto and male tenor voices:
http://www.youtube.com/watch?v=TTKSTlKwPPc
this piece is called "Et misericordia" is a part in a composition by Johann Sebastian Bach: The Magnificat in D major:
http://en.wikipedia.org/wiki/Magnificat_%28Bach%29
Top

Today I have learnt once more something in your executions, ame.
The appropriate videos are "what make things interesting"!

Thank you so much for the time,

which you raise for all readers of the LK-forum!!
ame, we need you!!!

you had the same thoughts as i: beautiful sunset!

some ravens and crows are talking nearby and i think i hear whooping swans in the distance... and mallard's voice.


some time ago there were voices of fieldfares. there have also been sounds of human activity: noise from some sort of a powertool, a saw or a drill... and traffic is humming in the distance.
edit: now at 16:00 the powertool sounded again, together with some swan calls.


and oops: while i was writing the sun went away and the golden glow is away.
Top

i have had the camera open for 10 - 15 min and i've heard some distant banging, like gunshots. maybe someone is hunting waterbirds...
Top
Locked
1091 posts