It is becoming a habit, now, to have one of these Super Special pictures topics as well as a Discussion topic for each Webcam. This one is late arriving - sorry.

This afternoon's odd behaviour deserves to be recorded here by those who took screen captures and videos.
Please post them here, as soon as you like. Thanks.
Top

I recorded this curious behaviour of female eagle. Isn’t the “intruder” her male? ... but for some reasons she doesn’t let him come closer to the nest ... maybe she really laid egg(s) ??? But why she behaves so surprisingly? When observing the American Bald Eagles (close cousins of our eagles) I saw that they share their incubation duty and give each other the breaks so the other can feed.

[Added on March 10]:
I have one more, very short but the best one, I think (yesterday, I have not examined all the recorded video files in my computer, now I uploaded it additionally). Female eagle caught male’s wing with her beak,

she was really coscienceless and cruel!

Thanks to Ame, and Sulev, for recording the pattern of marks on Sulev's tail feathers. Next winter feeding ground season, it may help us to identify him.

Olga, this is a wonderful picture. Pontu gives such clear images, and Sulev displayed his tail markings again. Thanks for capturing this.

Sulev's tail marks are like two eyes and a nose! Thanks Mutikluti.

this could have been a picture collage of Sulev's tail marks. i think i have it somewhere in storage... yes, i think it was this picture.

Jo UK wrote:Olga, this is a wonderful picture. Pontu gives such clear images, and Sulev displayed his tail markings again. Thanks for capturing this.

i have finally found one super-super-picture which was lost for a very long time.
it was published in the montly supply magazine of the newspaper Helsingin Sanomat in March 2010.
it's taken by the nature photographer Jussi Murtosaari a year earlier (i.e. in March 2009)
at an eagle feeding place somewhere in SW Finland.

the magazine got lost in our house as paper sediments are piling up in the corners.
i tried to look for the picture in the internet, without success. today i finally found
the magazine and took a picture of the picture which i've posted here. it's a wretched
replica of the real printed picture which is 48 cm x 22.5 cm in size, but i hope it will
give you some idea of the situation on that opening of the marsh.
(-sorry about the size. i've already re-sized the picture down to 50%.

(as a compensation for borrowing the picture i think i can mention that
J. Murtosaari has published a book where there are more pictures of eagles and other creatures. they are accompanied with stories of how these pictures were taken, but alas in Finnish.
there are summaries in English, however. the publisher is Docendo http://www.docendo.fi/tuote/951-0-36084-8)

the text says that there are altogether 36 WTEs captured in this one single photograph!

they are accompanied by the usual entourage of ravens and hooded crows.

i made a re-count of the eagles and i think there are 37 of them! i think they have missed the
one that is flying in the centre back-ground. i missed that, too, on my first count.

when i saw the picture in the magazine for the first time my first thought was that the picture
was just a joke, a collage of several different pictures put together, but later i've realized that
it's a real thing, as we have seen WTEs in flocks on the winter feeding grounds, and reports of
LSEs in flocks on their winter grounds...

EDIT on May 29th 2013: this picture was published again in the monthly supplement of
Helsingin Samomat in April. in the supplement of May 2013 they told that they had studied the
raw picture files and they assured that this picture is genuine and not manipulated (the first thought that comes in mind nowadays).
they published all the three shots which the photographer had taken of this situation.
the big picture is the middle one.
in the raw picture one can see the edges of the cover of the photography window, too.

Jussi Murtosaari tells that the white spots in the trees were not snow but white feathers.
these get released in the air "like snowing" when young eagles fight for food.

they corrected one major detail though. the feeding place was situated on the Southern
side of Lake Pyhäjärvi in SW-Finland, and not in Quarken as they wrote in April 2013.

it's funny how two years hunting eagle rings trains ones eyes. on the first time when i saw
this picture i didn't notice that there were ringed eagles among these birds. now i saw
immediately that there are at least six ringed eagles. now i can also see that the age distribution
of these eagles corresponds to the increase on ringed eaglets in Finland: the vast majority of
these eagles are juveniles of 4 or less winters.

Wow, that's a really special picture. Have one too, WTE is on the cover of "Geo", a German journal in September:

Now that I am knowing more about them, I see them much more often! Hope I will see some breeding next year! 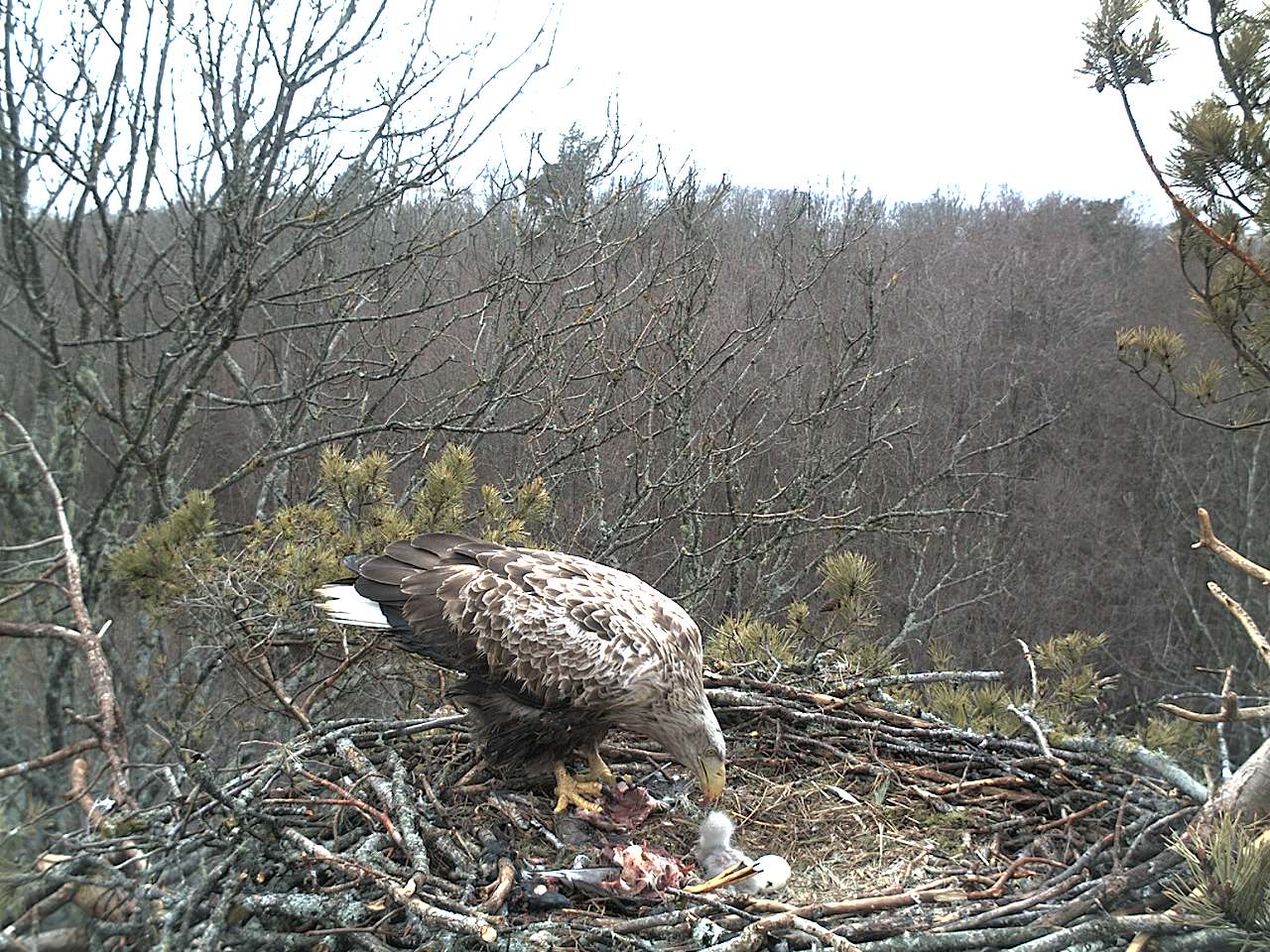 in the end of July 2013 when Illimar was expected to be out of the nest Urmas and helpers went to the nest to see if they could fix the camera.
on that trip several pictures were taken in the tree top on the side of the nest, looking out in alla directions.
a panoramic picture made of these pictures was then posted on the WTE-nest 2013- thread by Mutikluti:
viewtopic.php?p=266986#p266986

it turned out that some of the members (using Linux operating system) were not able to open the panorama for viewing.
because of this i took two screenshots of that panorama to post them here so that everybody
will have a change to get some idea of the landscape over which Linda and Sulev reigned.

first the right side of the panorama with a view on the nest.
on the right there is the branch where Linda or Sulev sometimes sat right next to the camera but narrowly out of our view.

then the left side of the view, looking over a meadow to the seaside.
some blue see can be seen between in the middle of the tree top on the right (in the above rigth-side picture this tree is on the left).
this is the tree which we saw on the left side in the live nest camera and where all kinds of visitors,
like woodpeckers, thrushes, magpies and crows used to sit when they came to entertain the eagles.

Wow! It's breathtaking. Really! You are an angel! Thank you so much for your effort!!!

Interesting, that there is not only wood and the sea, but also meadows. A paradise, which Sulev has chosen for his wife and children.

Thank you Ame for your efforts. Wow, what a nice place . It's a beautiful landscape

i'll post here some great pictures which i have found in the Ponu archive.
i'll leave them as big as they are in original format
altough it is huge compared to our normal maximum size.
i think it so enjoyable to see the details in clarity
(compared to the always somewhat smudgy screencaptures.)

first a double portrait of Linda and Sulev (standing). this was taken on March 22 at 14:09.