It’s too late in the season. And the little female is inexperienced. 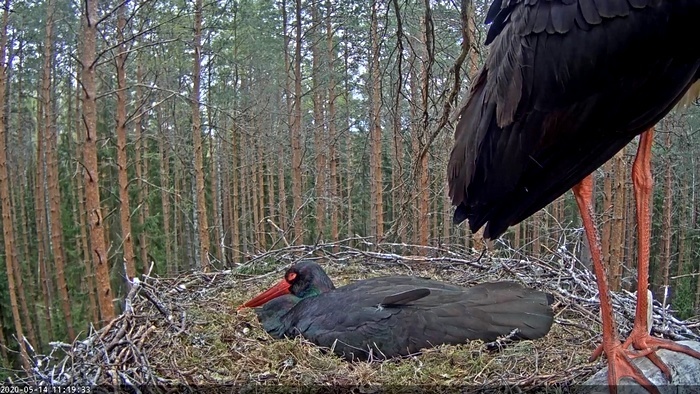 3 minutes before the egg 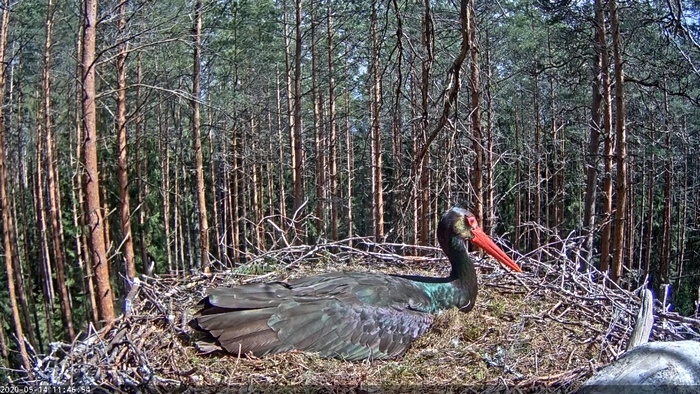 no matter what will happen, Karl II is happy with the egg. I open the camera, he stood up turn the egg and .... then ...he arranges the moss around it. he poked eager , it has to be thoroughly chopped up.. 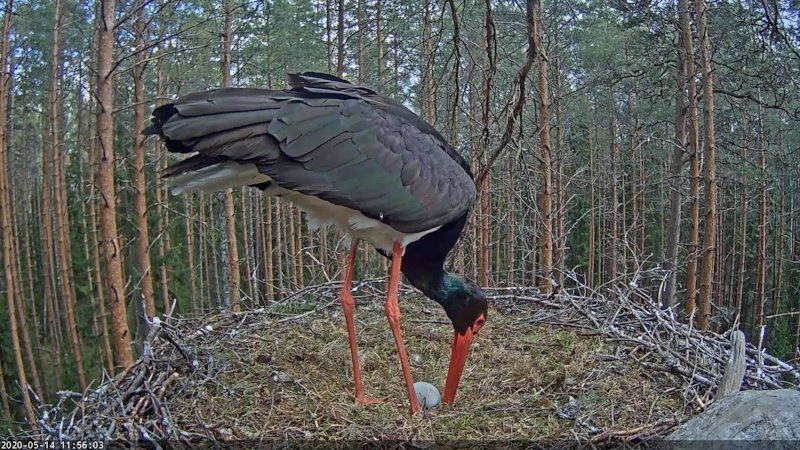 I took some pictures of the egg laying.
Oh my, this was so beautiful!
There was so much tenderness and so much happiness in both Karl II and his little princess. 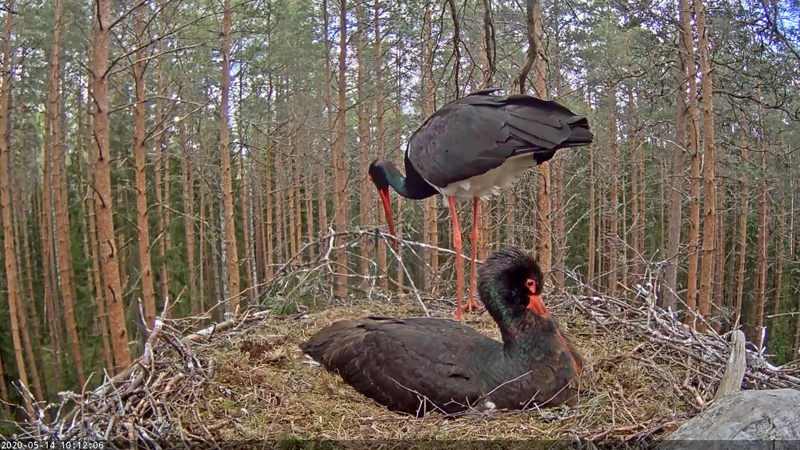 10:13:03 I believe this is the moment when the egg is laid. Her very first egg.
Karl II watches attentively. He looks a little concerned. 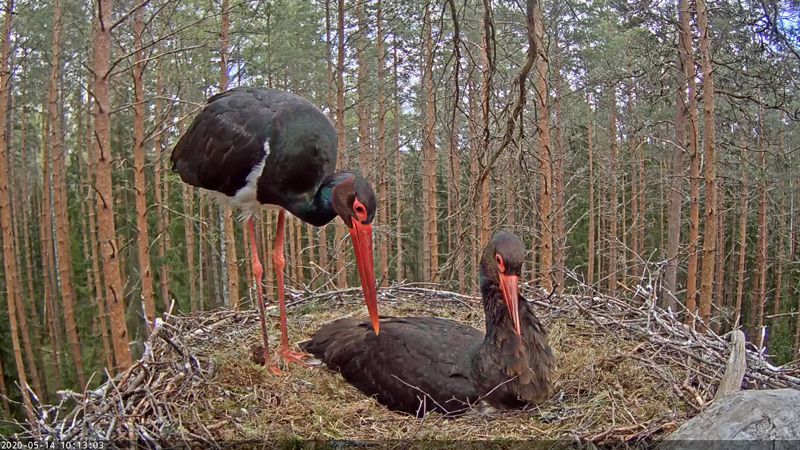 Karl II puts his beak between her tail feathers. 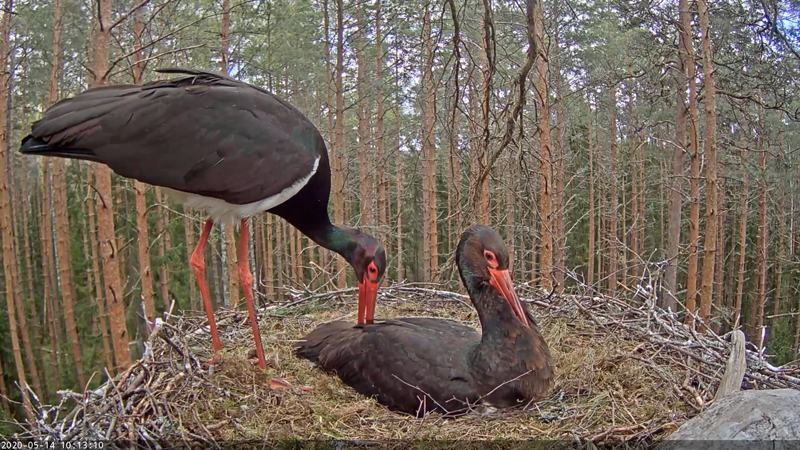 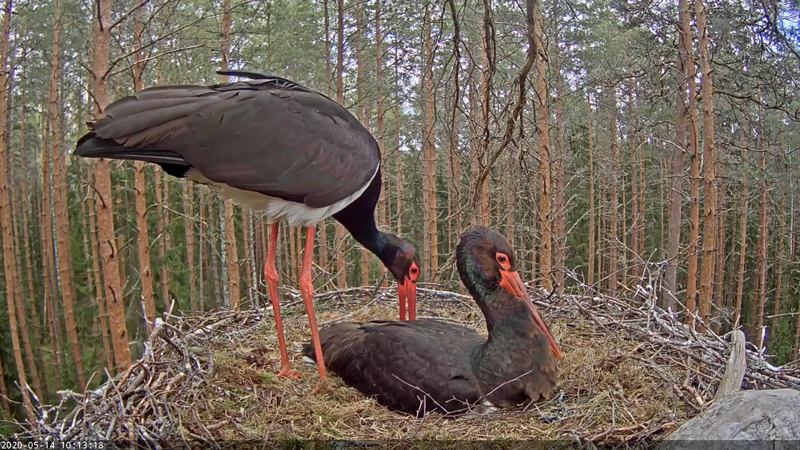 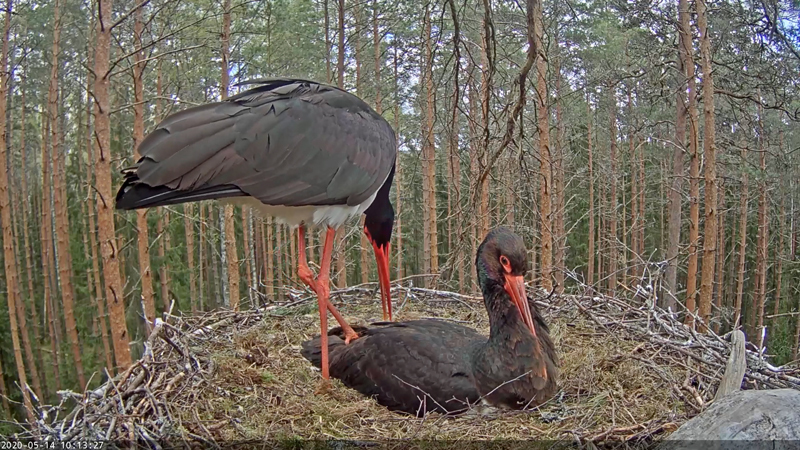 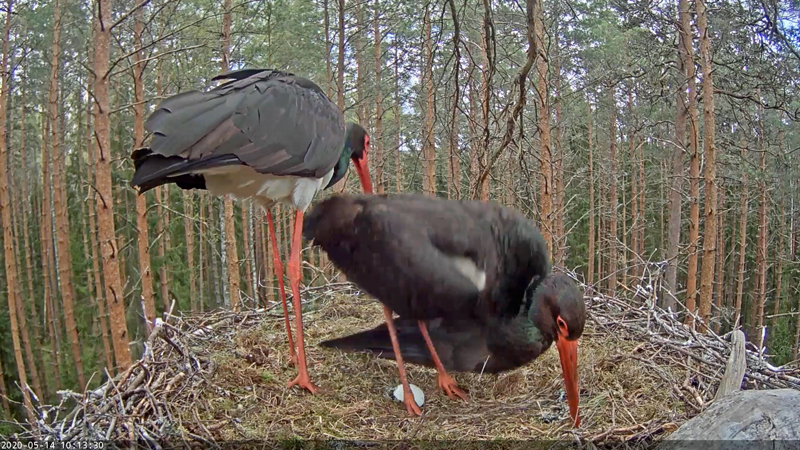 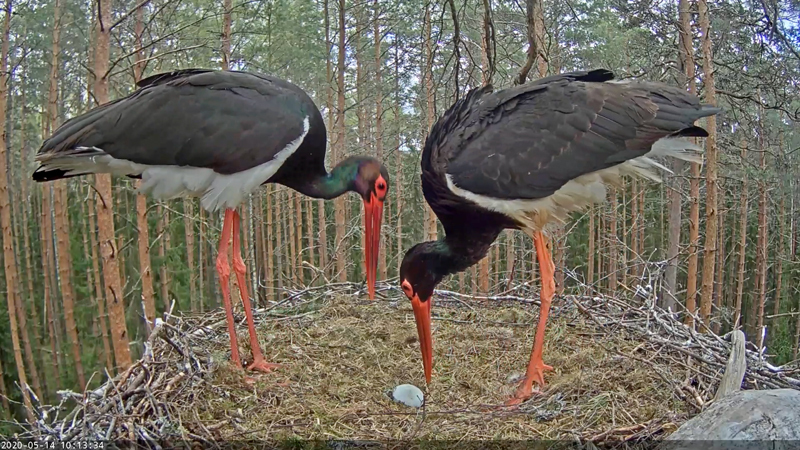 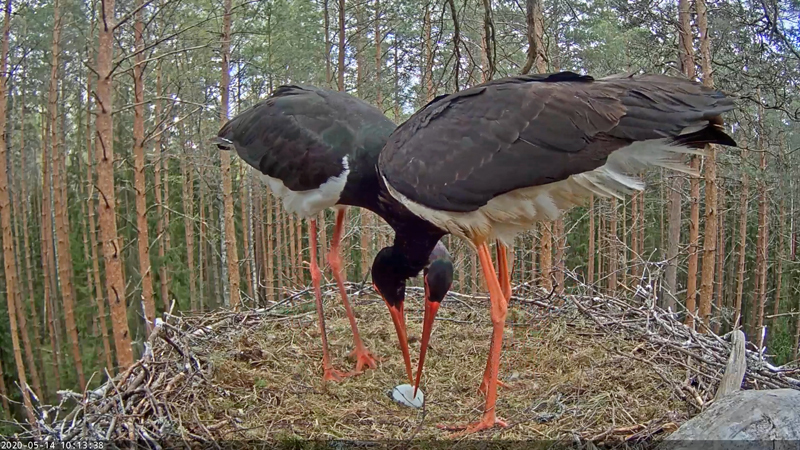 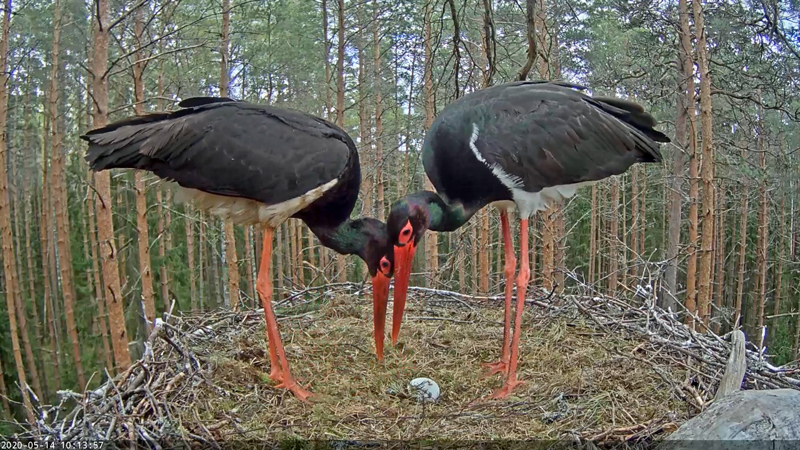 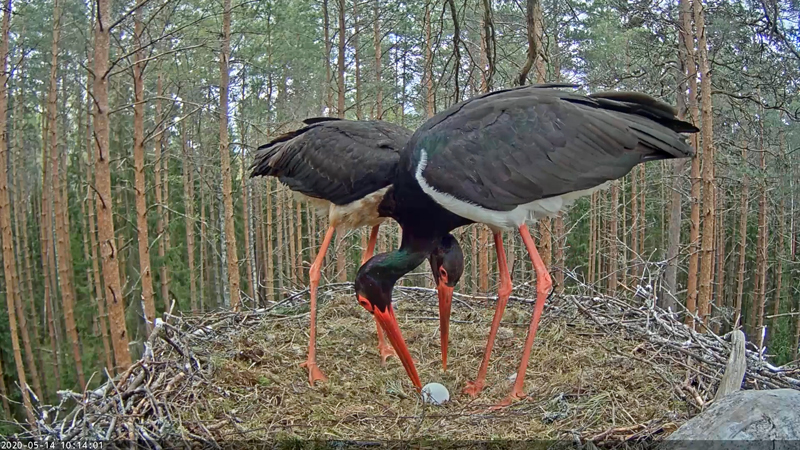 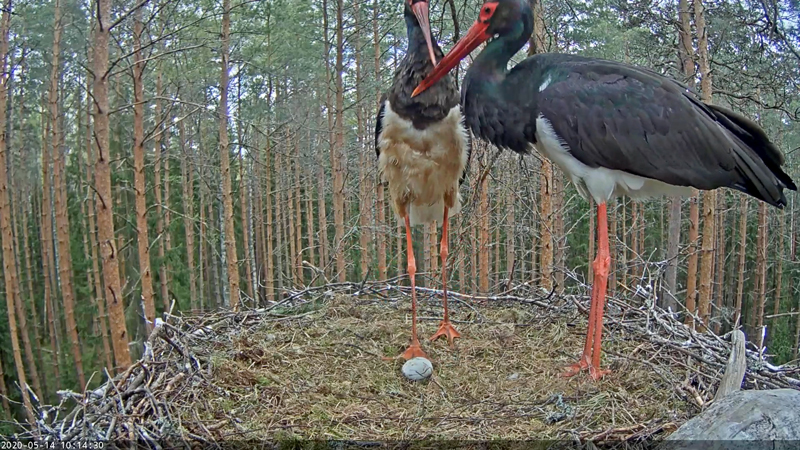 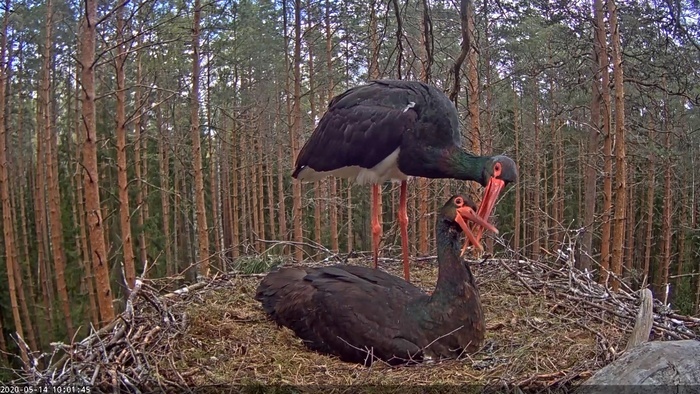 36 days, that would be from June 17th should chicks hatch?
Is there enough small food for small chicks? 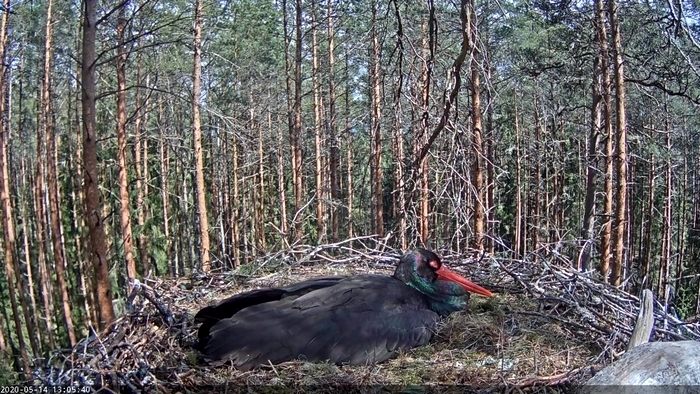 I didnt expect that. I am really worried.
also worried for Karl II. If the young lady is like known, he will starve...

I somehow did expect eggs since the young female's behaviour changed a few days ago (on May 12th).

We can now only wait and see what happens next.
Will the female also incubate? She is almost a child herself.

If she doesn't help with the brooding, the egg(s) will be lost anyway.
If she doesn't come, Karl II will wait for her. I suspect he will wait a very long time.
But at some point he has to leave the nest to eat. And he will do that. He will not starve to death.

And even if the female helps with incubating, and the chicks hatch, the difficulties are far from over.
We can only hope that there are no more than 2 eggs. I think Karl II can find enough food for 2 chicks on his own. But even then the little female will have to watch over the chicks while Karl II is hunting, for at least the first 2-3 weeks. Karl II cannot keep the chicks warm + protect them, and at the same time search for food ... 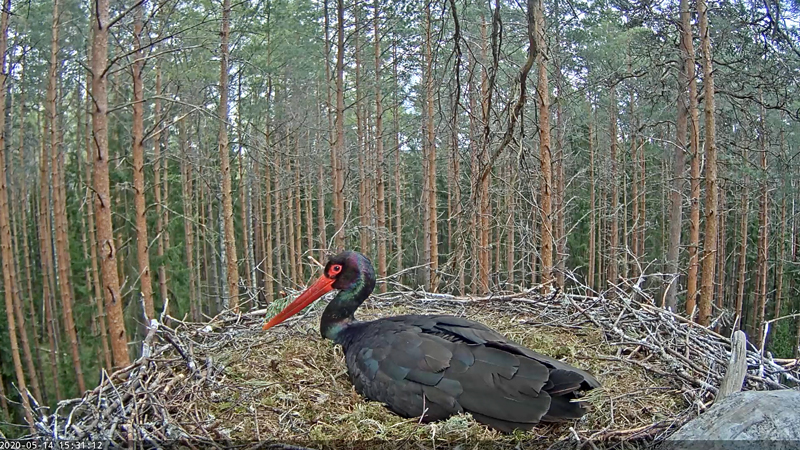 He turns the egg. 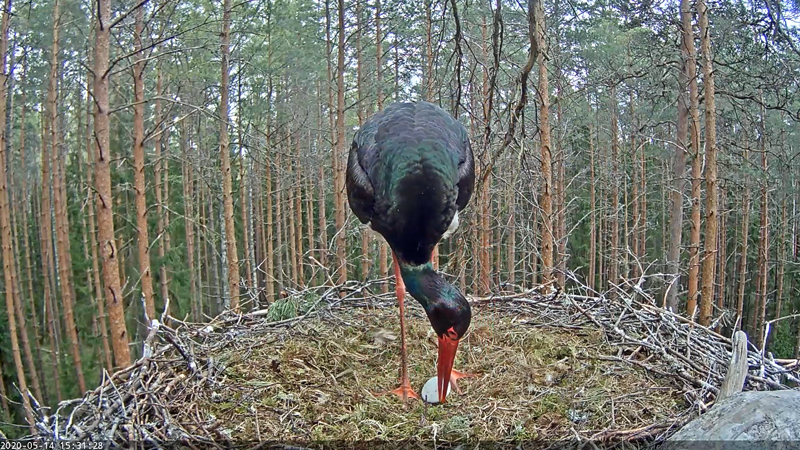 There was something very special around the couple when they were having the egg.

Their red beaks and legs, their elegant black and white suit, and all the red trees around them, It looked like a piece of art made by a great painter.
To me there was magic there

First of all: many thanks for your observations, reports and pictures!

Because there seems to be intense incubation, right away, this egg could theoretically hatch in about 33 days, I think.
From Thursday 14 May 2020 to Tuesday 16 June 2020 will be 33 days.


I don't know what Karl II will eventually come up with to feed his newly hatched chicks. (IF they hatch...)
I think his genius will be tested extensively.

I hope that the parents both manage to promote the offspring. 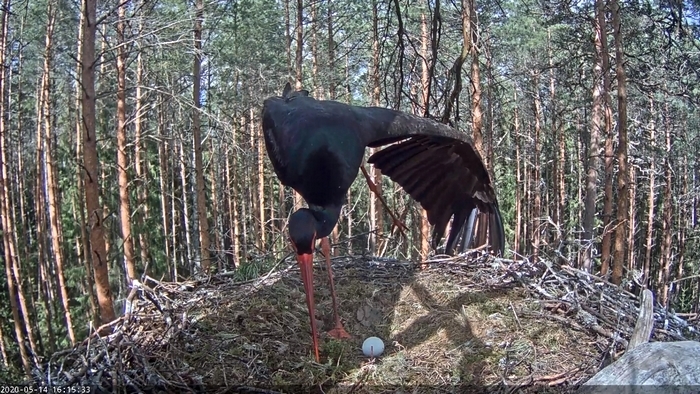 Somehow I suspected that the woman's behavior would still lay an egg. But I actually hoped it wouldn't happen anymore.
But of course that's just my human mindset again. Maybe you'd better trust the animals to know what they're doing. But when I read again that she is too young, I also believe that some things may have to be learned real, but a lot is also guided by animal instinct. So maybe everything could still be correct.

I read correctly Karl has been on the nest since 9 a.m.

Now the question arises again, was she scared of her own egg that she was gone so long?

But one has already accepted so much, at first she hardly came, then a bit more often, then longer, then sometime overnight, maybe because she is so young she always needs longer for everything and has to get used to everything. But that's just human thinking again!

I am also so divided, prefer to stay a single egg or at least now a second one ?! Because if it works and the baby stork has to be alone in the nest, it is also not nice.


I also have to honestly say, if the time is really too late, if I want to see how it is hatched and then maybe there is a lot of temporal grief ... I don't know if I want to see it ... even if nature is like that.