Here is our much loved Black Stork nest again, from a slightly different angle this year.

Information about it at
http://www.looduskalender.ee/en/node/12789

Pontu Archive of still images taken at one minute intervals.
http://pontu.eenet.ee/kurg/2012-04-03/2 ... -12-14.jpg The url is changed each minute and day. To look at any particular picture, make sure the url shows the date and time you want to see.


Friday, June 29, note from Renno:
Juveniles got on the left leg white rings 708T (wing legth 34 cm)"Tommy", 708R (wing 36,5cm)"Lenny" and 708U (wing 35cm)"Kelly". In the right leg there is aluminium rings A10155-57 respectively. They were lot of pecking/beating and somehow 708R injured his bill few cm from the tip - there was scratch visible and some blood on the bill. I didn´t detect it but probably he hit something (me, nippers, climbers) too strongly. I am really sorry for causing this injury while ringing but hopefully it will heal quickly.

Monday, July 2
708R ("Lenny") was removed from the nest. He was found to have a fractured beak. The storklet was transported to the Institute of Veterinary Medicine and Animal Sciences in Tartu. Read more here: http://www.looduskalender.ee/en/node/13843

Tommy(708T), now adult stork visited nest in western part of Saaremaa island in Estonia. He did not start breeding there 2017, but was spotted by trail camera twice in one nest 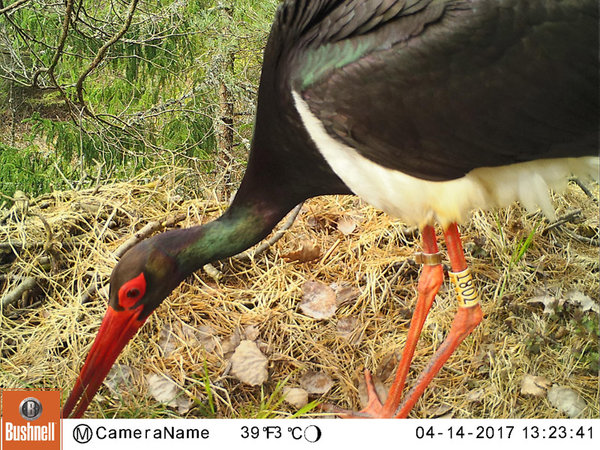 The first stork arrived, I don't know who is it ...Tiit or Tiina!

Hooray, here is a Black Stork! Links and information will follow.
Top

What a good news!
Hope he/she came to stay!
Proud member of SHoW (StorkaHolics of the World)
Top

WOW, that was great news, and a beautiful sight

Proud member of SHoW. (StorkaHolics Of the World)

"There are no strangers here; only friends you haven't met yet"
William Butler Yeats
Top

The first stork arrived earlier than Donna in 2008.
Whoever saves one life saves the world entire
Top

I think its raining.!!
Carmel a member of SHOW .. I hope you love birds too. Its economical. It saves going to heaven.
Emily Dickinson
Top

My heart cries whenever I see this nest,last year nest of LSE and hear the call.......

5AM - pitch dark, but I can hear that it is raining.
Top

A black stork has arrived to prepare its nest for the season. Video is jerky because the cam / power has not warmed up enough yet in the very early morning light.

macdoum wrote:My heart cries whenever I see this nest,last year nest of LSE and hear the call.......

Yes, Toomas-the-first arrived in the nest and we mixed him up with Donna.
Whoever saves one life saves the world entire
Top

Kitty KCMO wrote:A black stork has arrived to prepare its nest for the season. Video is jerky because the cam / power has not warmed up enough yet in the very early morning light.

I think it must be Tiina because she was silent.

Whoever saves one life saves the world entire
Top

I don't really know how to tell them apart. But the one there this morning was lovely.

now; my hubby has a medical appointment tomorrow, so I must

tonight. Goodnight / Good day, everybody! Enjoy this & all the other cams today, & I will enjoy your photos & videos when I come back.

cam just opened and there's already been a stork!

at the moment there no-one.
Top

Proud to be a member of SHoW
Top
Locked
2691 posts