For 5 years we had a camera at the nest of Tiina and Tiit in Läänemaa and in 2011, 2012 and 2013 we could see chicks growing up there. Unfortunately in 2014 Tiit did not return to his nest and Tiina and the attempts of nesting with a new partner failed. None of the various visitors in 2015 (among them a Ural Owl) wanted to stay and Tiina waited again in vain for a partner arriving.

We got the news that our eagle men in Estonia have found a new nest and worked over the last days to get a camera fixed and a stream going from there. We still wait for more information about the nest and maybe some pictures of the installation work. All I have heard so far that it is a "great one (in dimensions), different as usual by the construction" and it was difficult to find a place for the camera.

With grateful thanks to Felis silvestris for this introduction.

If you are, or want to be a storkaholic, please join us on the Black Stork forum. Fall in love with Estonia's Black Storks as we watch a new breeding season on the new (but very old) nest, at a new location in the South of Estonia, Karula National Park. And you can compare it to second Black Stork nest in South of Latvia, if the wish for that appears.

Ten years ago, many of us met, for the first time, as we watched the Black Stork pair Donna and Tooni. We were enchanted by these lovely birds and the excellent quality of the Estonian web camera. Friendships were formed, many lasting until today. Some of us met in Estonia and had picnics, walks in the forests and a happy time in such good company.

Hoping for a successful Black Stork season, we hope to revive the enthusiasm and interest in Black Storks and in Estonia.


As it is new place and not easy at all to place there camera, we don't know, if everything is well before see the image transferred through all system.
Actually there is two pictures possible to get, because that cam is from previous nest in Läänemaa, means with two sensors looking from different points - one a side of nest (may be too low?) and other from up down to nest (may be too high?).

Nest is found only in February during Eagle Club nest searching camp. I was that time in Russia for eagle trapping (Kirilla on migration map). New camera nest is actually very big and old, we simply did not find it before (well hided). Another interesting thing is that nest is placed around a big branch of retention seed pine of previous forest generation, maybe ca 200 years old (but I can be wrong in suggesting age).

Karula National Park is probably the best breeding area for Black Stork in Estonia nowadays. We don't know what exactly causes in environment that success, but probably there is enough different food and undisturbance in breeding sites.

Also we have one adult Black Stork (named Eedi) trapped from Karula NP, but don't know where he breeds, hence, we know that he wintered successfully in Saudi Arabia and soon will be back at breeding grounds.

9th April. The names Karl and Kati have been chosen for the two adult black storks. Aita suggested those names and we all agreed.

The egg incubation period is from 32 to 38 days.

16th May
The first sounds of "egg-talk" heard from an egg.
The first hole in an egg seen. viewtopic.php?p=466876#p466876
Later the same day, a second egg had a hole and forum members could hear two different egg-talk sounds.

Late May/Early June
One of the chicks is noticeably smaller and underdeveloped. Kati made 2 - 3 failed attempts to dispose of that chick. It remains in the nest. The cause of its failure to grow is unknown.

3rd. June
The failed fourth egg was thrown out of the nest. viewtopic.php?p=473082#p473082
On the same day, the seriously under-developed chick was also thrown from the nest, finally disappearing from distressing sight and sound during the night of 3rd-fourth June.

27 June
The video stream from the nest was lost during a thunder storm.

28 June
Urmas ringed the young storks. He reported that the equipment in the nest is not damaged but the receiving antenna at Tele2 tower will be inspected.
Inspected and repaired the same day. Good work by someone


17 July
DNA tests revealed that both nestlings are females.

15 July
One of the adults was ringed and fitted with a transmitter.
Awaiting DNA results to determine if it was Kati or Karl.

Kati on the left 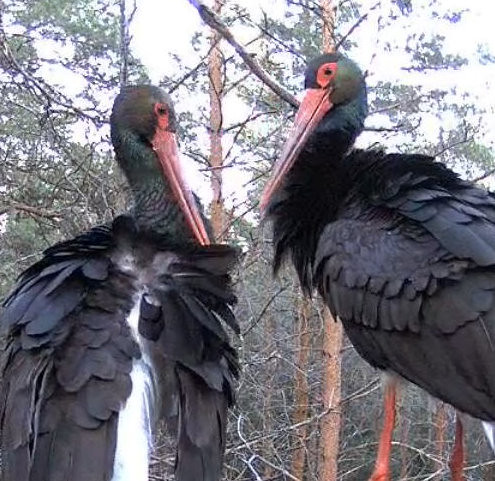 Thanks to Michi on 12th April. 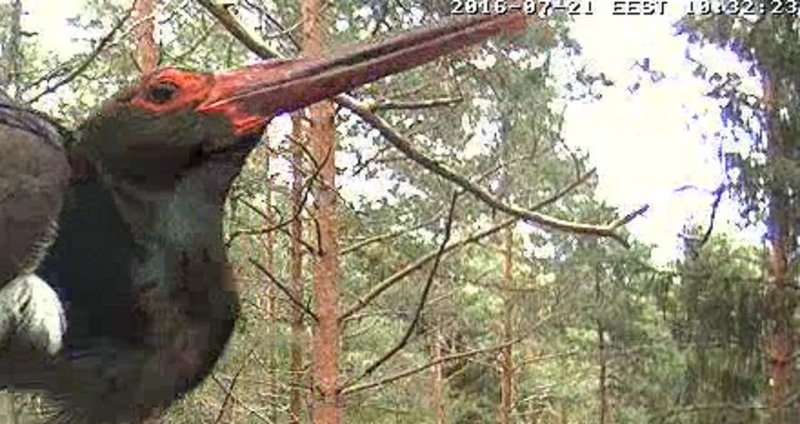 Here is a picture about Eedi:

If this stork will land in this nest then we know whom nest it is....
Proud to be a member of SHoW
Top

Oh yes, there is a stork!
They have a very interesting interior design in the apartment.
Many thanks for the cam!
Top

Yes it is interesting interior design. I can almost imagine how all those future storklets(just dreaming yet

) will sit there on that branch!
Just now let´s hope for second stork!
Proud member of SHoW (StorkaHolics of the World)
Top

There it is!!!
Proud member of SHoW (StorkaHolics of the World)
Top

Juta, your hope fulfilled much sooner than I dared to think!
Top

If only you knew how much you have been waited for, one thousand times welcome you are!

19.58
Second stork arrived and mating happened within about one minute.

The position of the date/time stamp is awkward. The background is a mix of bright sky and dark branches.
Top

Juta, your hope fulfilled much sooner than I dared to think!

Yes, me too!
It is even good that cam didn´t come online earlier. No frustrating waiting time!
Proud member of SHoW (StorkaHolics of the World)
Top