lovely to see them again, thank you

Thank you !!! So great, all are healthy and my favoured cam is online again :)))
Top

I think the tilt of the camera has been corrected. 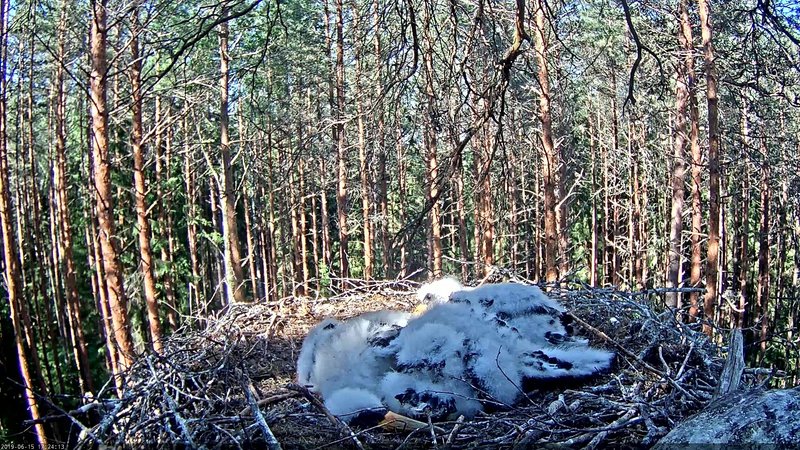 Many thanks, Urmas and the whole team!

I saw frogs. If there were any other amphibians I can not say. they eat very, very fast 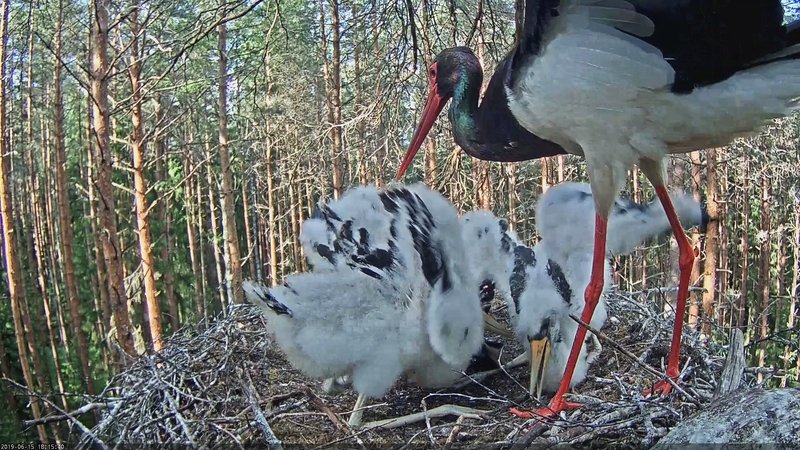 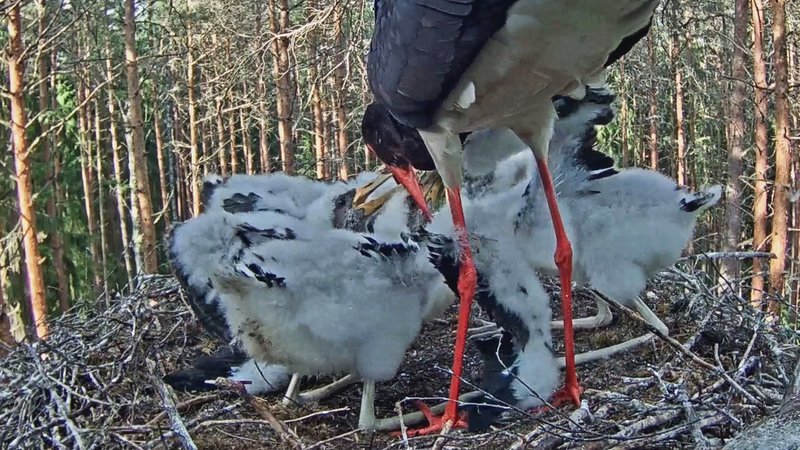 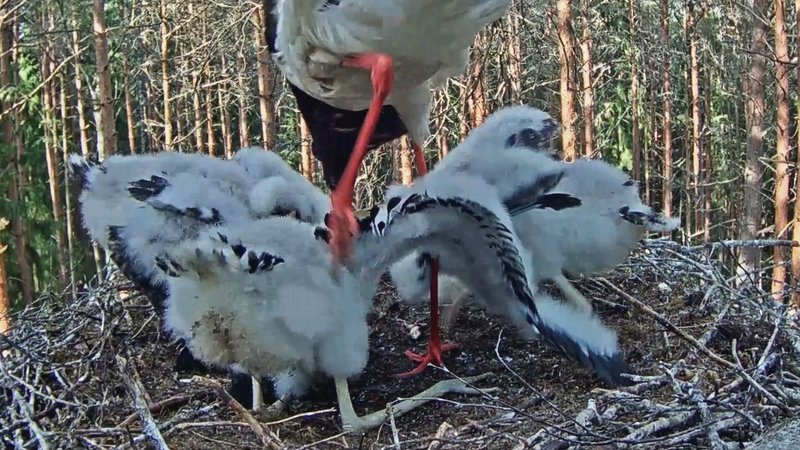 Now I would be happy if I could see Kati. 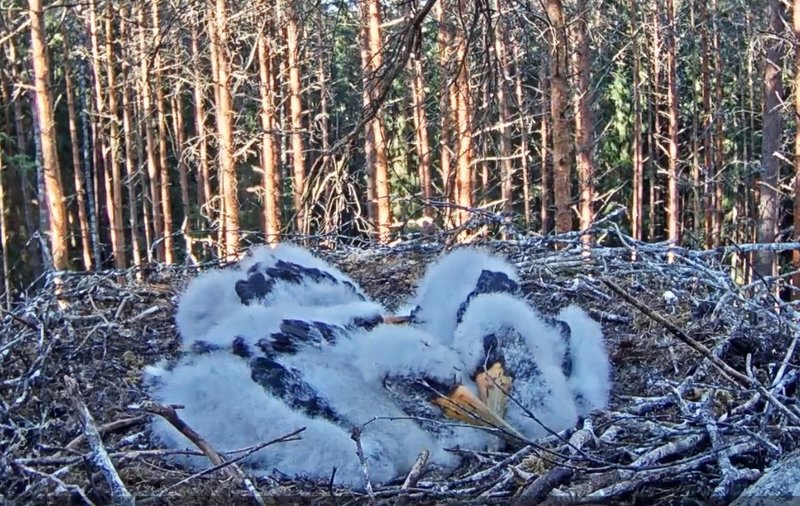 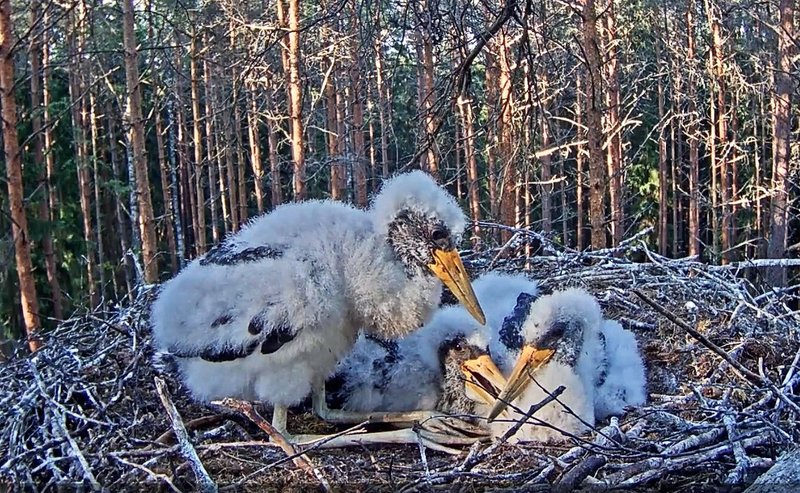 19:35 one is standing and doingnest work 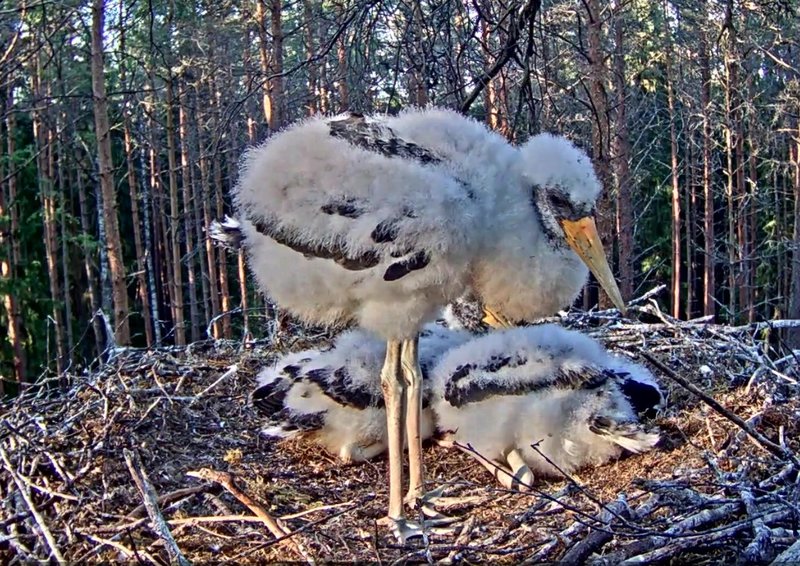 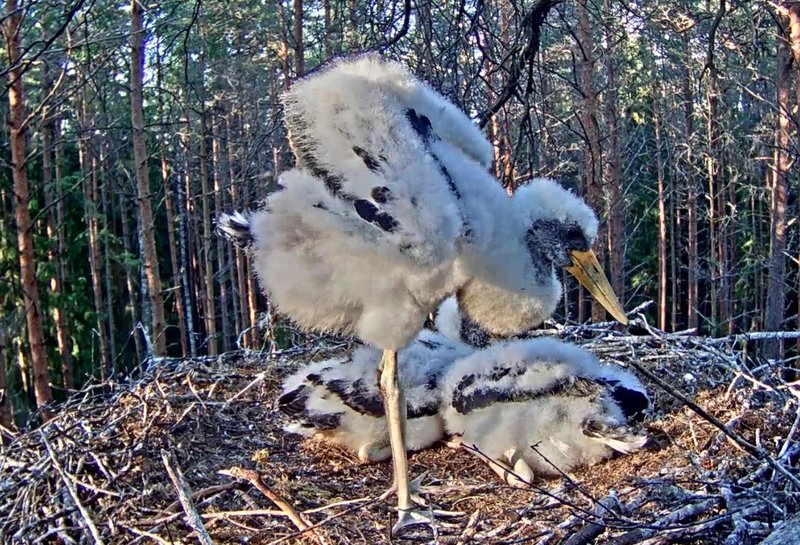 Kati, come on the stage and make Liz and us all happy.
Top

Thank you for reports and lovely pics!

I am glad stream is back online, storklets look cuter then ever 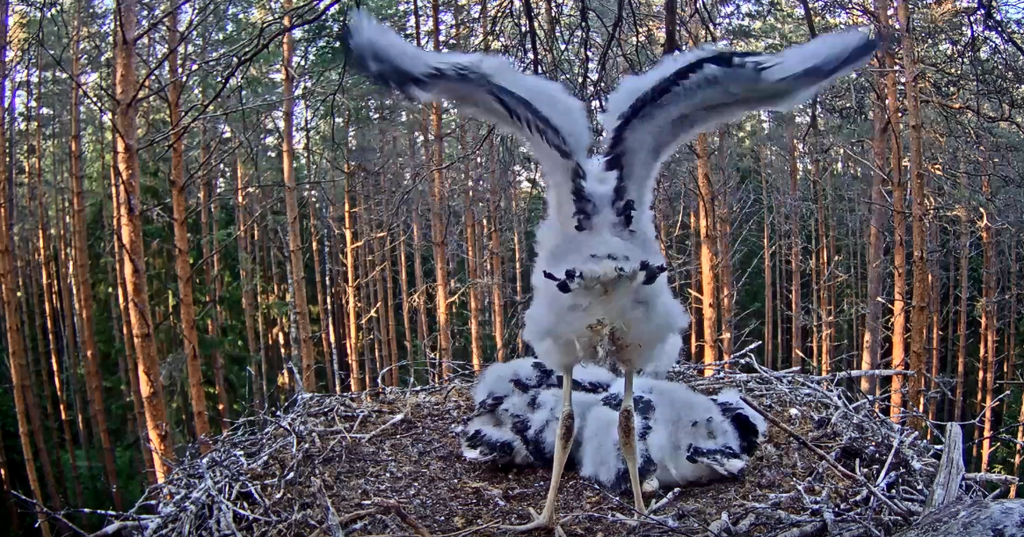 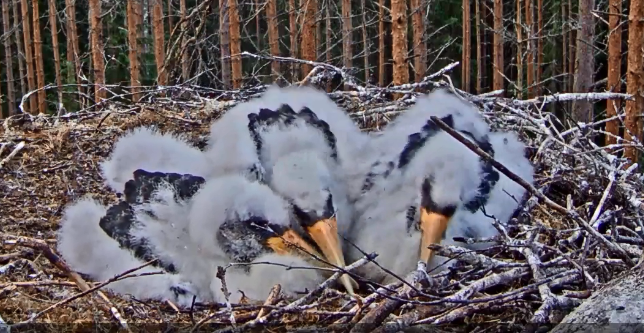 23:02
In this light they look like cotton wool chicks.
Top

Tomorrow at 10:50, we all pour coffee or tea and sit down and wait

That was really interesting. I didnt hear anything but dog barking before storklets were upset. It looked like one of the storklets woke up from a bad dream and scared everyone else too

is that the sound they usually do when parent is feeding them?

Thank you, Hellem for noticing

thank you for the info and the video!
I think, a parent has arrived at nest. Maybe he is in the old nest. The storklets had made the same sounds they do when a parent comes. A lot of twittering ... But no alarm calls.

A bit strange is, that the storklets for such a long time - in a circle - pecked or searched on the nest ground, - like they do it, when they look for leftovers after a feeding. But there wasn’t a feeding.

Now it came to my mind, that I haven‘t heard big wings before the storklets woke up. I‘ll scroll back the stream a little, and listen, if there is something.

Thank you all very much for todays reports and pictures!

Edit:
It was surely not the arrival of a parent, that the storklets waked up. No sound of big wings. There was only a good minute before they woke up, at 23:23:10, a single sound. Like a muted knock on wood, very near. On the curved branch?

Crissy, after all I think you‘re right. It was maybe only a dream, that one storklet had, and it waked up the other two. They hoped they get fed, but in vain.

thanks a lot for reporting and pictures

No alarm, they tell each other about the frogs and fish

It may be that a parent has arrived and landed nearby in the tree.

They chirp and are in a begging posture. They are poking in the nest bowl.
They do that for no particular reason. I also see it on other nests

EDIT: It is very early .. I can see it now. Crissy and Michi have interpreted it correctly. Next time, I'll read all posts before answering 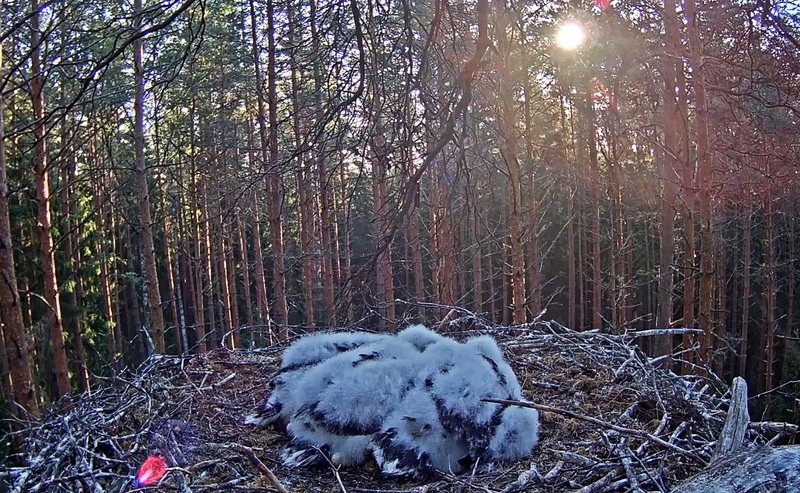 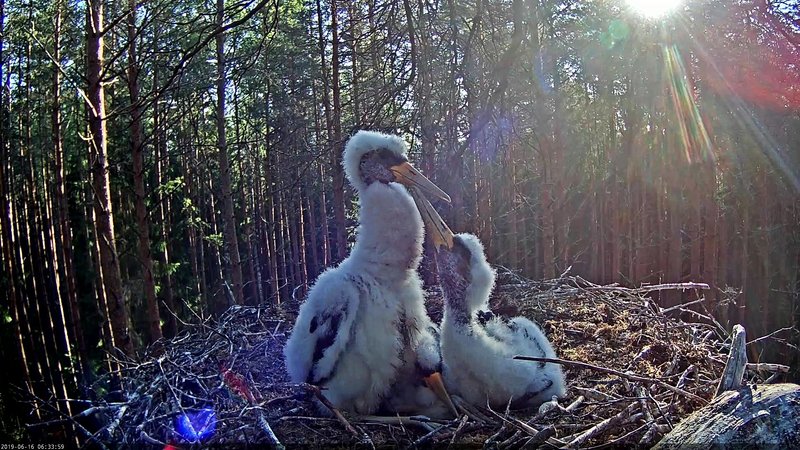 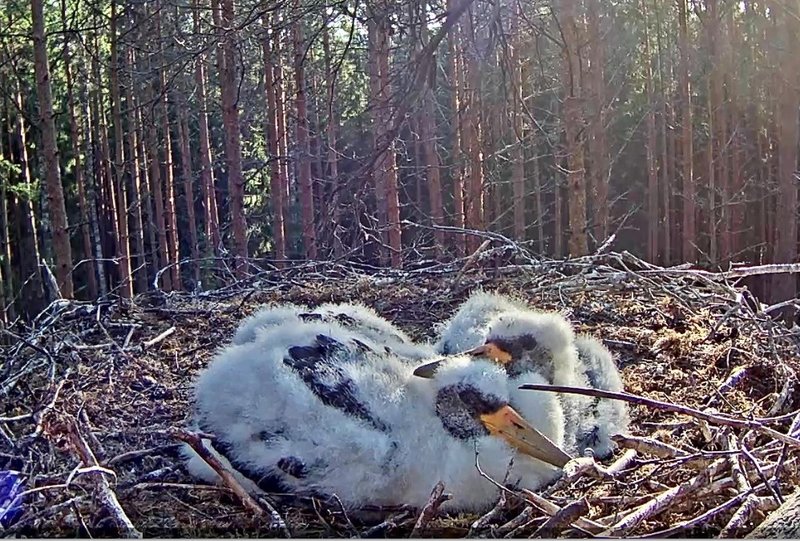 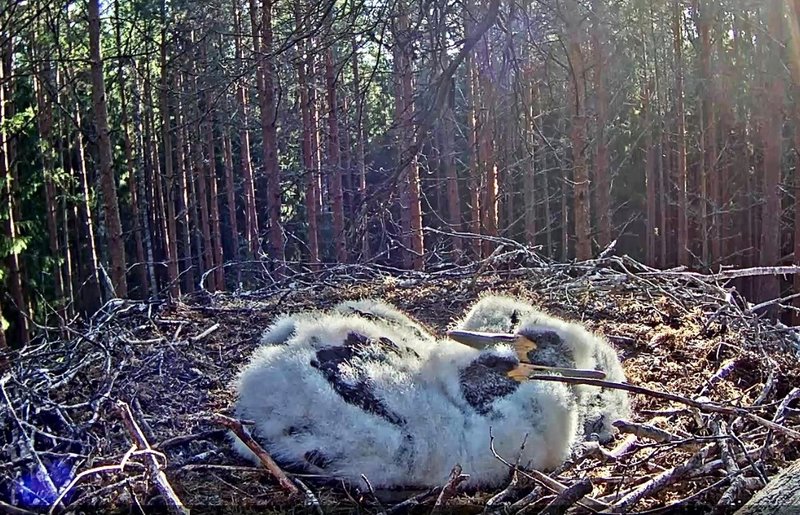 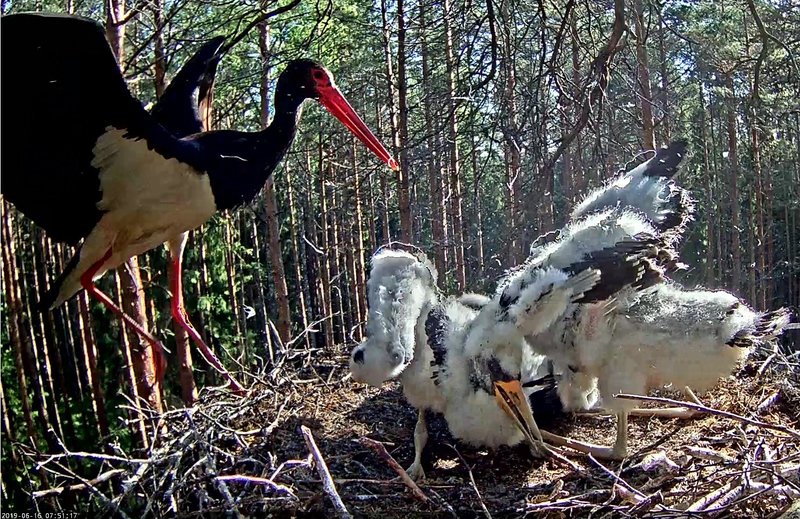 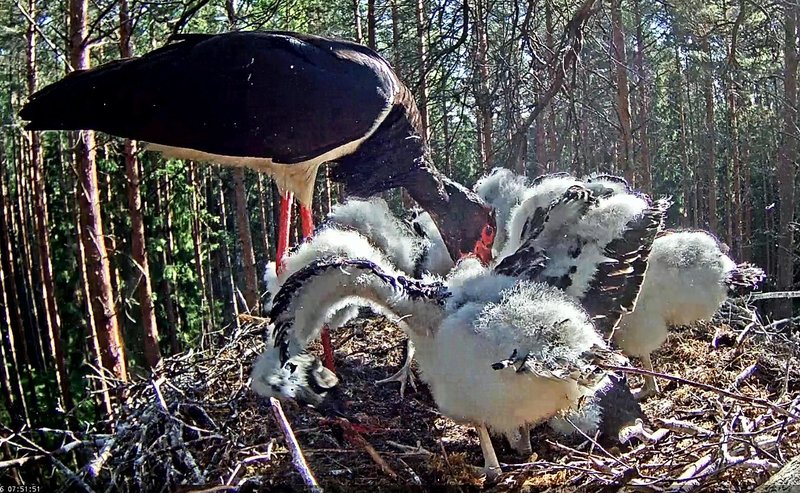 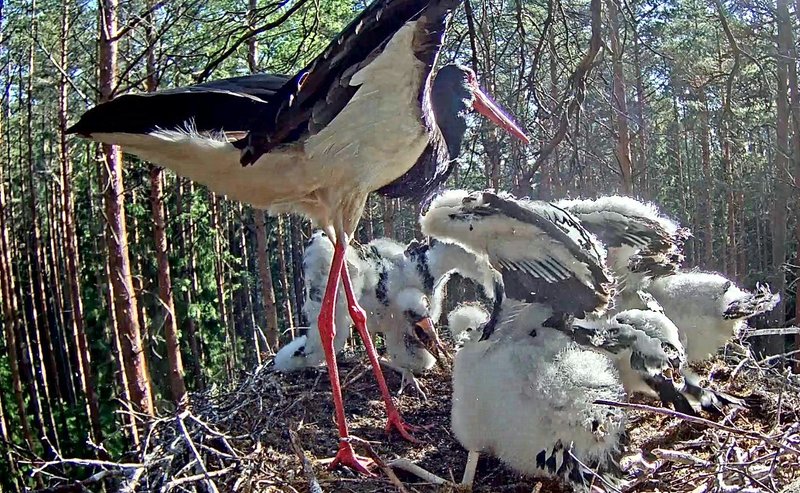 Urmas Sellis went to the pit. The camera signal transmitter had changed direction in stormy weather, which was corrected. Fortunately, the tree to which the peak sender was attached was not broken. Even the wires hadn't to be repaired.
Because there is good reason to write today, tomorrow storklets will be month old because the three young chicks hatched all on May 16th.