I'm not sure either if the youngest osprey is still alive.
Looking at pages 82 -86 of finnish forum I guess little one has died yesterday..
Starling could you please so kind to translate what they wrote on page 82? 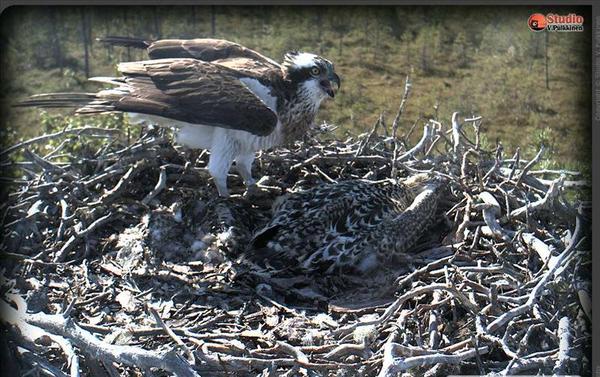 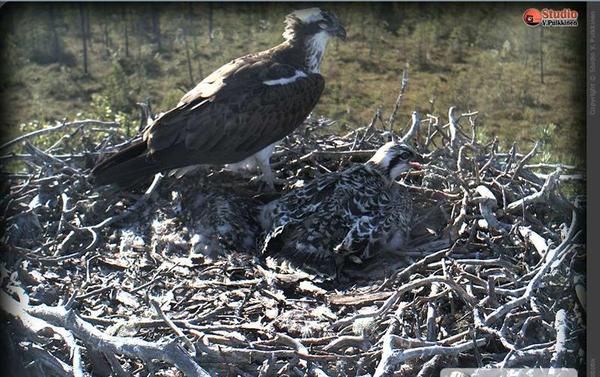 Ferenz wrote: Looking at pages 82 -86 of finnish forum I guess little one has died yesterday..
Starling could you please so kind to translate what they wrote on page 82?

They are writing there that Gunnar stopped moving and died (on Sunday evening). And that he looked already starved and weak. The last fish was seen in the morning around 10.30, but the cam hasn´t been working all the time. Mostly people are telling how sorry and sad they are. But they are also relieved that Gunnar doesn´t have to feel pain anymore. Most likely there hasn´t been enough fish. (There have been also very strong winds and some are wondering has it affected on Kemo´s fishing). They are hoping that the remaining chick, Vuokko will survive etc.

Today (23 July) Orvokki - Mom took Gunnar´s remains away about 19.30. Tomorrow (24 July) will be the ringing/banding of Vuokko. Most likely the ringing man, Matts Finnlund will tell more about this nest after it.

Thanks so much Starling for your help! It's so sad to read it but that is how nature works..

Mom has removed the dead chick from the nest 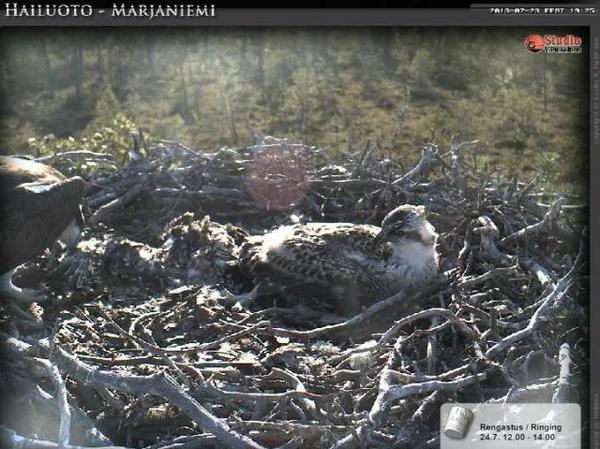 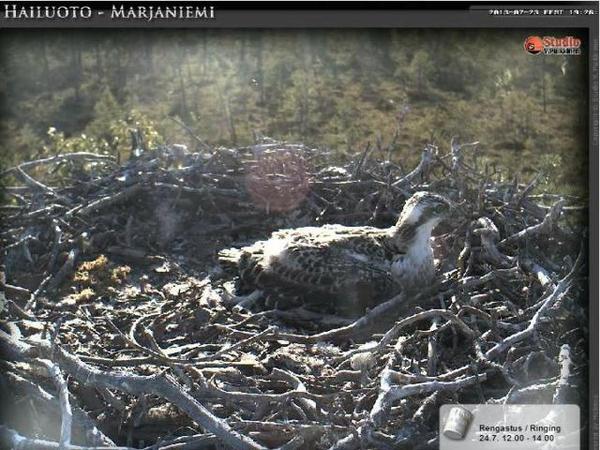 What a pity that the second eaglet could not survive. But as you wrote before - that´s how nature works.
Let´s hope for the remaining eaglet that it will become a strong young Osprey.

It was absolute interesting to hear that the dead eaglet was removed by the parent bird!
Nature does nothing in vain (Aristoteles)
Top 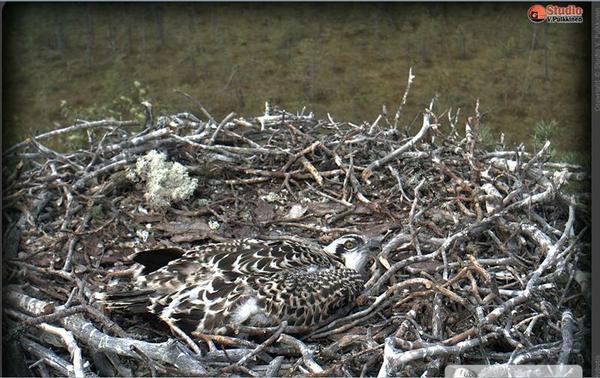 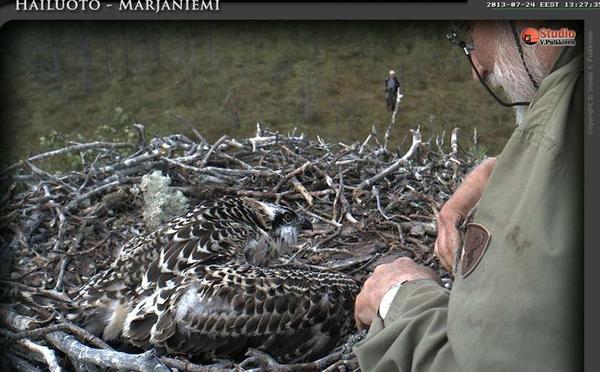 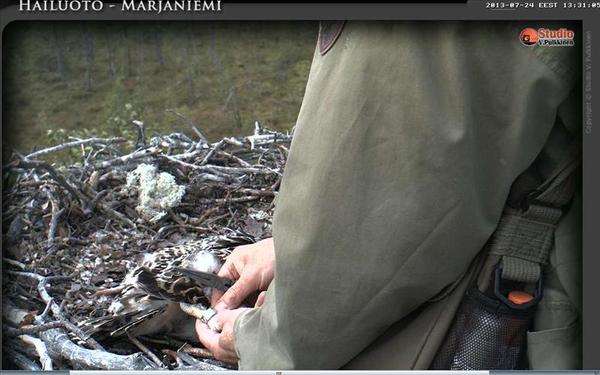 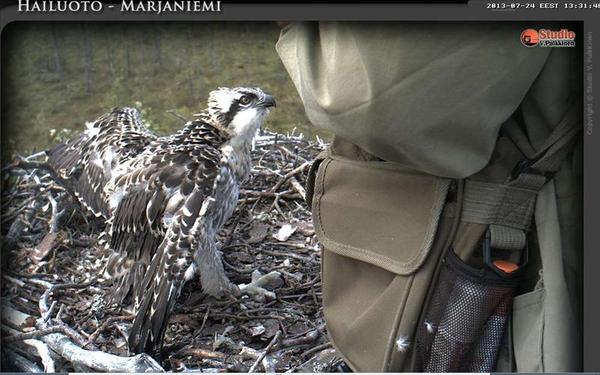 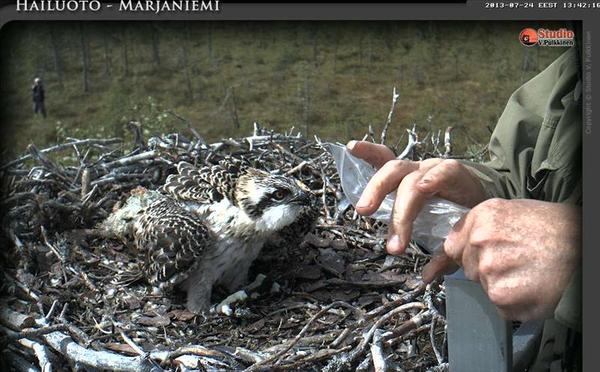 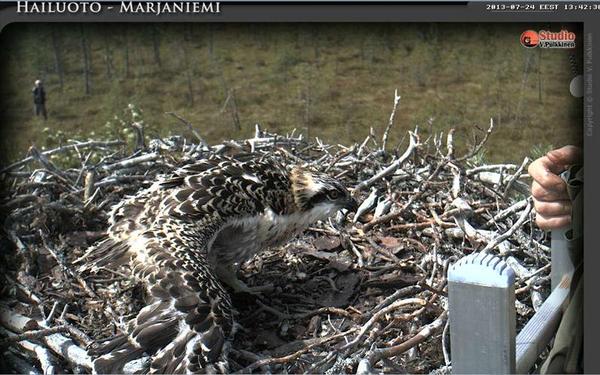 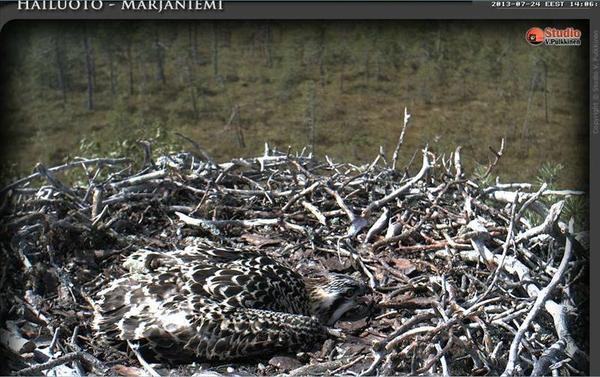 Thank you for the pictures!

Banding wasn't so bad for the feisty raptor, he/she is calm again... 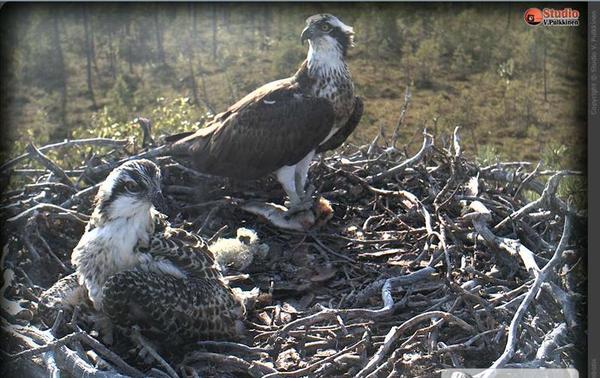 Is young osprey Vuokko a male? 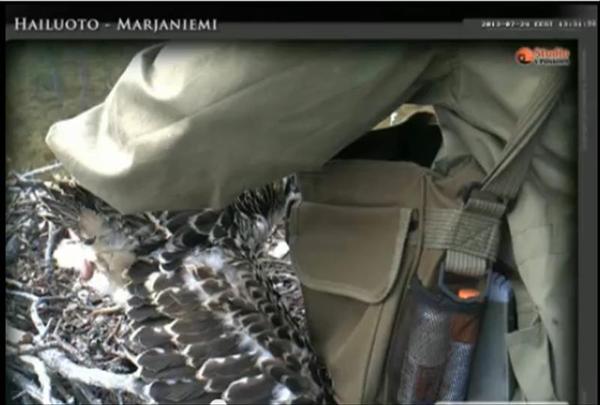 21.59 Mom and Vuokko together in the evening sun.

A few things from his writing:

- The chick, Vuokko is a vital, well-fed chick. The weight was 1,6 kg and the crop had food too. The wing was 32 cm. It will take most likely two weeks before he/she starts to practicing flying. He is not sure about the sex, but the petite foot indicates for a male.

- He tried to look parts of the broken egg shell (the 3rd egg what went broken). But he didn´t find any, so he took a "random" sample of the nest materials, from where he can try to look part of the egg shells or food remains. The freshest food remain at the nest was a gill cover of perch.

- They tried to look the remains of the dead chick from the area, but they didn´t find any. Maybe Orvokki-Mom had removed the remains far away or some animal had eaten it already. Gunnar died because of lack of fluids/food. There have been nests in the archipelago of Kvarken (http://en.wikipedia.org/wiki/Kvarken) where the smallest chicks have been in poor condition, not so well-developed and most likely they will die before the fledge. The weather type was cold, rainy and windy for a long time. And he suspects there have been hundreds of chick dying incidents in the Osprey nests of Finland.

- For the first time they left fish at nest (6 x maivan/ vendace) which was bought from a local market and with a good "best before"-time.

And according to the web cam the fishes were tasty.
Top

Thank you very much for keeping us updated here!

30 July
It has been looking rainy and and wet since yesterday.
12.41

Oh poor birds, what a bad weather .
Thanks a lot for keeping us informed what's going on there