The past few days we have had beautiful weather, although we are starting to feel the nip of autumn in the air. This has meant that lots of the Rutland ospreys are starting to move off away from Rutland and back to their wintering grounds. This includes the Manton Bay female Maya, she was last seen yesterday morning; she is most likely already on her way to her wintering grounds, maybe somewhere in southern England or northern France already. 33(11) the Manton Bay male has been in the bay today but it doesn’t look like he will be here much longer, this morning he caught a massive trout, which no doubt means he’s stocking up before the long migration...

As for are satellite birds the young S1 is powering over Southern Europe, and yesterday morning cross over towards Morocco at the strait of Gibraltar, it’s going be interesting to see where he goes next! Before he made is trip down into Africa, he stopped off in Southern Spain at the Embalse de Cordobilla at wetland reserve in the Andalusia region of Spain.

It’s been another beautiful day at Rutland Water, this morning 33 caught a fish which he then ate on the T-perch, not long after, he started to climb high into the sky, until he was just a tiny speck against a blue back drop, and it looked as though he might have left for his migration. A couple of hours later, an osprey swooped into the bay, it was identified as 33, so he’s not gone yet…

S1 is making great progress and as of last night he was about half way across Morocco, deciding to overnight west of Marrakesh. 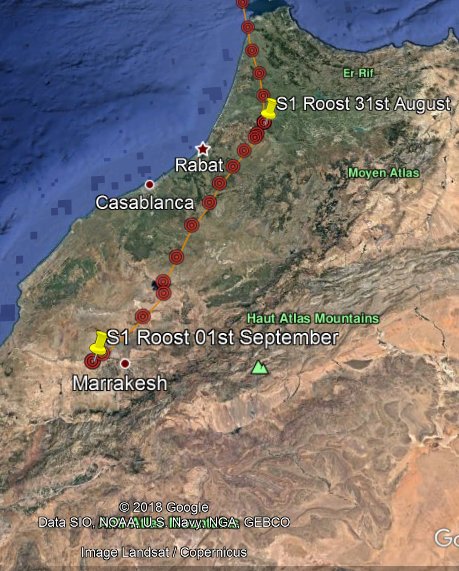 S1 has made fantastic progress; he entered Western Sahara from Morocco on the 3rd September at 17:00. He has been skipping over the border into Mauritania a few times; a good reminder that these ospreys don’t see our man-made boarders, highlighting the need for international cooperation to protect not just these, but all migrating birds. 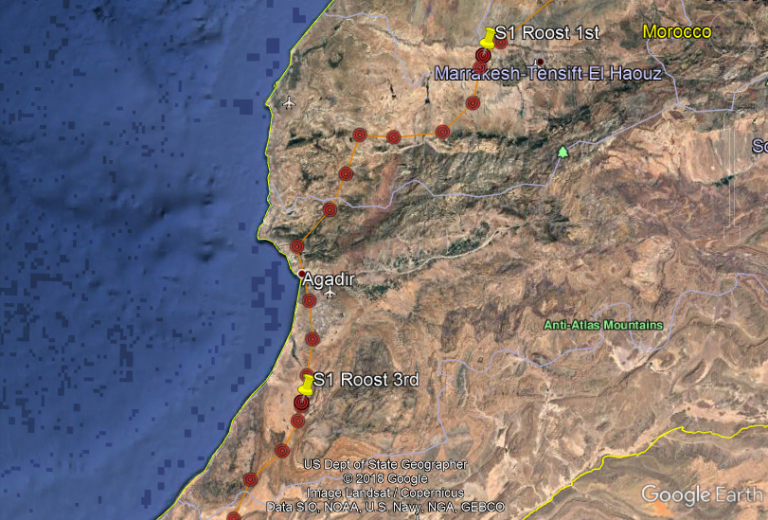 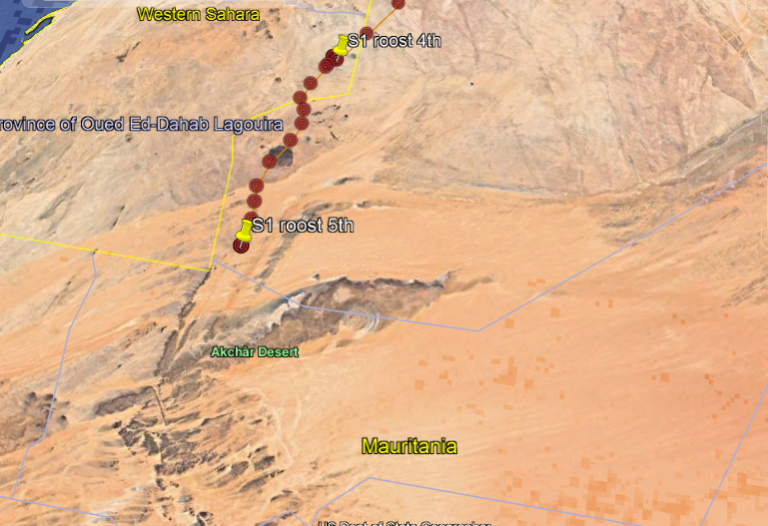 S1...After spending the night in the desert on the 5th of August,
S1 was quickly up into the sky and off south, he has now made his way to the south of Mauritania. This morning at around 7:00 he was only about 100 km from the border with Senegal, which means he could be arriving at his wintering ground as we speak! It will be very interesting to see which part of Senegal or The Gambia he has chosen to spend his winter. We know that 30 has her preferred spot on the Senegalese coast, somewhere between Dakar and St Louis, so is S1 heading down to this area? Or could he be following his nest mate S2 who was photographed on the Sine-Saloum Delta, near the northern border between Senegal and The Gambia? At S1’s current rate it won’t be long until we have the answers to these questions, let’s hope he has a successful last few days of migration before his well-earned rest.

I thought S1 might have reached his wintering grounds by now, having entered Senegal on the afternoon of the 7th, but instead he has carried on and looks like he could be heading towards The Gambia. After crossing the Senegalese border he roosted to the East of St Louis, he then headed further south and, as of 17:00 8th was just north-east of Kaolack. He is reasonably far inland at the moment, around 150 km in fact, and is only about 70 km away from the Gambian border, so could his wintering ground be somewhere along the central river? We should find out soon!

S1 had reached Senegal by Monday, but is now in Guinea-Bissau, west Africa. He has crossed over The Gambia and seems to have sought an island existence for itself for the time being, having headed near Bolama. " 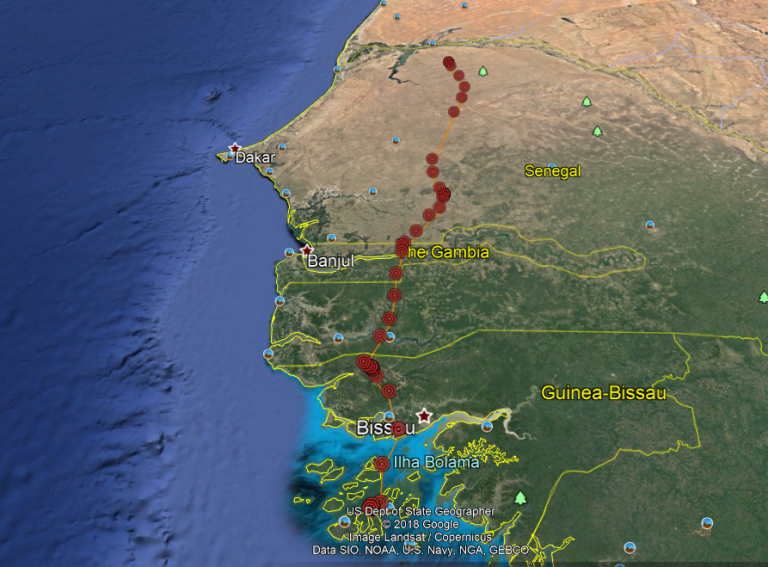 Since we last spoke, this young male has moved even further south – now into Guinea. Answers on a postcard for where he will eventually end up (not a request to be taken literally, thank you readers). Sierra Leone? Côte d’Ivoire perhaps? 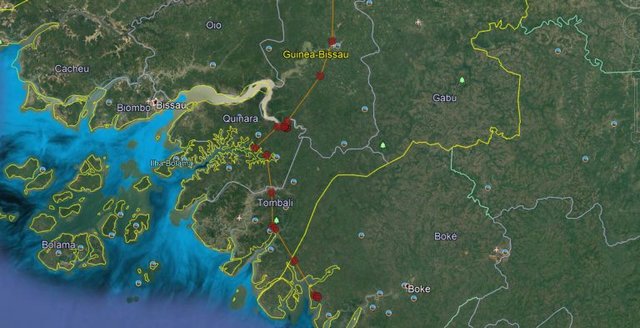 Maya arrived back on the nest at 10.39 this morning - the season has officially begun! 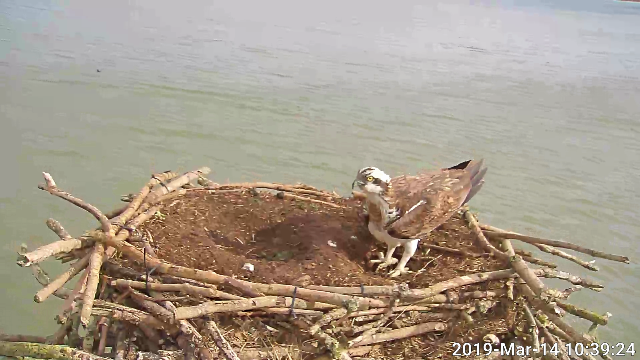 15 March 2019 - The wait is over... a lot of calls have been coming in about the mystery ringed osprey... can confirm she's number 25, the female that has been spotted flying around the area already! Sadly not 33...

https://www.facebook.com/RutlandOspreyP ... 1952380558
Egg-cellent news at Osprey HQ today... Check out the blog to see what Maya got us for Easter!

https://www.facebook.com/RutlandOspreyP ... 5839498836
We have a trio of eggs in our Manton Bay nest! it was difficult to identify the precise time that Maya laid her third egg this morning, but when 33 was incubating, he shifted around and there they were! Check out our blog for more info! https://www.ospreys.org.uk/the-holy-trinity/

https://www.facebook.com/RutlandOspreyP ... 2449967175
Maya brings her husband breakfast in bed (a huge roach) for all his hard work incubating through the night and morning. So nice to see parenting duties shared equally between these two!
Top

April 5: We're on to our second egg of the season!
Maya laid at approx 10.55 this morning!

It seems very fitting that, with the Easter holidays not too far away, Maya has been getting busy producing her beautiful eggs and incubating them in all sorts of weather! This morning, we tried to analyse the footage from the nest to see if she had laid her third egg, and we were rewarded at 11am as 33, who was incubating at the time, shuffled around and revealed three eggs underneath him!

Maya goes Fourth…By Marie Dipple on April 11, 2019
At 9.05 this morning, Maya had been shuffling around for half an hour after a swap over with 33… she stepped to one side and revealed a fourth egg!

Changing places at dawn, 33 takes over incubation
of the 4(!) eggs in his brood from Maya. Never a moment's rest! 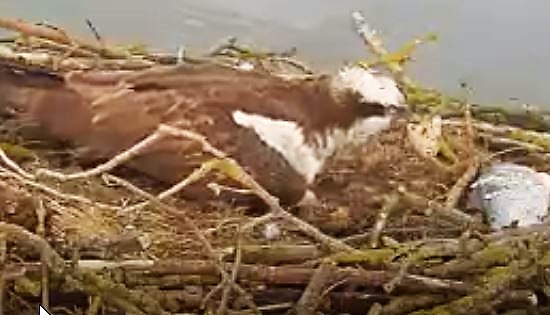 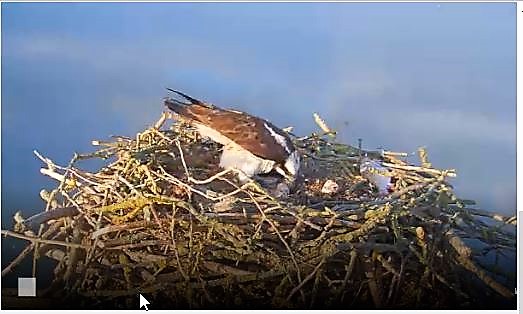 TWO bobbleheads for Blue33 and Maya

What a terrific Tuesday! I arrived at the center to open up this morning, with the phone ringing as I stepped in through the door.
Tom and Ann Price, our vigilant volunteers stationed down in Waderscrape hide, had been watching our ospreys from dawn for any signs of another new arrival. Tentatively they suggested they’d seen a third head pop up out of the nest as Maya came down to feed the two chicks… went back through the footage on the webcam and found…

3 bobbing heads calling for fish! This was fantastic to see and I trawled back through the footage to catch a glimpse of the hatching event…

33 returns and at the end of the feed, at last .......
I managed to get a capture of the Four Bobbleheads 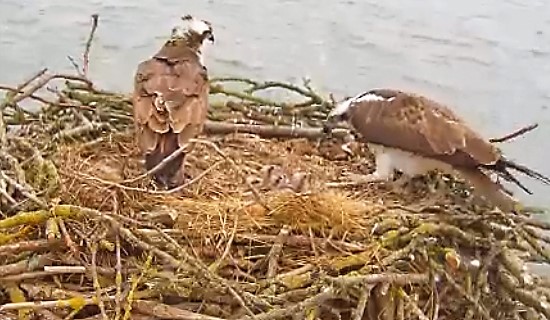