The intruder female shows up after chasing Louis, carrying fish.

Chimega, Thank you for your regular updates. I always read them. Enjoy, Rita
Top

Chimega, Thank you for your regular updates. I always read them. Enjoy, Rita

I'm glad you enjoy the videos. There sure is a lot going on at that nest!

Sorry I have been AWOL for a while! I am teaching several new classes and labs this semester, and this has been taking up most of my time. We are starting final exam week and so I will have more time.

But there is never a dull moment at the Hellgate Osprey nest! This is turning out to be a very different season, with some new twists in Osprey behavior. First of all, it is apparent that Louis is spending a lot of time at the next nest down the river (at the baseball park nest). Louis Matteau is a wonderful photographer, and he has been spending a lot of time documenting what is going on at both nests. Louis (the osprey, not the photographer) has been mating with Iris, but not bringing in many fish. Although this behavior, of a male spending time at two nests, has been seen before, we don't know how it will impact Iris.

Iris laid her first egg on 26 April about 6:40 AM. Since Louis is not bringing in too many fish, we are not sure if Iris will be able to keep her energy up or raise chicks. This is disconcerting for us, but we don't know how this will play out with these Ospreys.

Also, several KEEN observers has noted that the first Osprey to show up at the Hellgate nest WAS NOT IRIS! There was a female that showed up on 2 and 3 April, and I had posted that it was Iris. One of our excellent osprey watchers, Allison Lanier, noticed differences in the wing feathers of the first bird and Iris! Iris has a primary feather that is molting back in - this creates a "gap" in her wing. The first bird does not have this. I have posted a couple of the photos that Allison has analyzed. Thanks Allison - it is watchers like you that keep us on our toes!!

So who needs soap operas?? I don't know how this season will turn out for Iris, but she continues to impress me with her strength and character. She is my role model!

This photo of Iris clearly shows that her P5 feather in her right wing is molting in. (She has 10 primary feathers. P10 is the last one, so start with that and count down to P5). 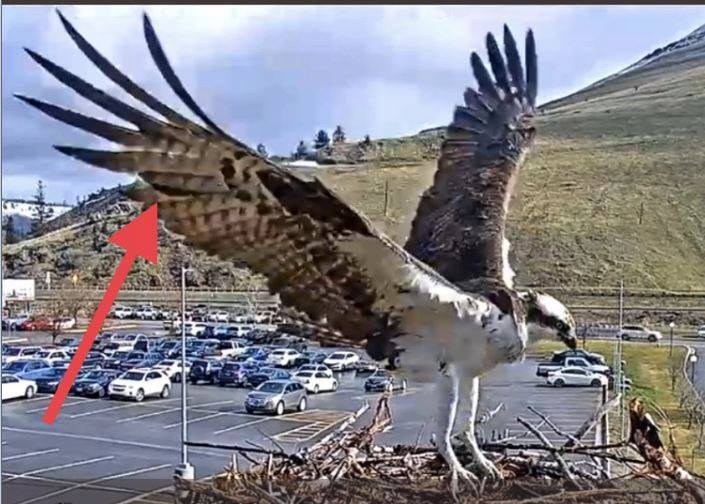 Here is another photo of Iris landing and you can clearly see the shorter P5 feather. 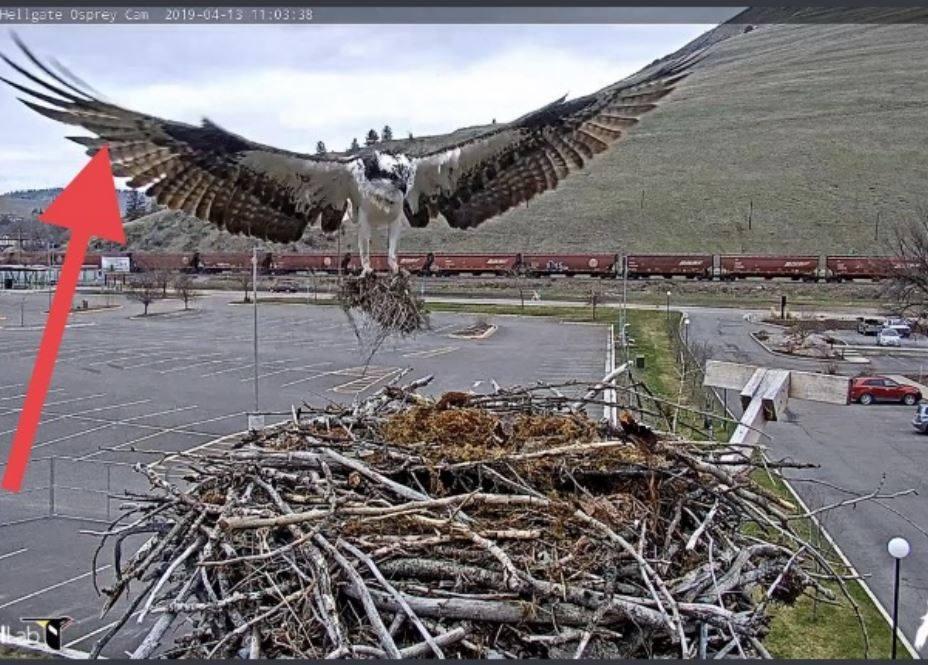 The osprey on the left was the bird that showed up on April 2nd and 3rd. You can see that its P5 feather is fully grown. The "real" Iris is on the right, and you can see the gap. THANKS SO MUCH TO ALLISON LANIER FOR NOTICING THIS AND PUTTING TOGETHER THESE GREAT PHOTOS!!

Iris had to go fishing for herself and caught a huge trout. She was gone from the nest for 2-3 hours, leaving the eggs exposed. She went back and forth between the Owl Pole and her nest with her fish, finally keeping what was left at the Hellgate nest. Meanwhile, Louis was spotted at least once, eating fish near the Baseball Field Nest. After sunset, Louis showed up for a quick mating attempt that failed, then left. Iris remains on the nest with her eggs, incubating and full, at last.

Chimega: So Louis seems to have another nest/female/clutch in a nest nearby. Do you think that Iris could
manage to successfully raise this chick? Because she has to leave the egg unguarded when she hunts. I would assume that the location of the nest gives a certain security against predators than a nest deep in the woods?

What do you think? Has something like this been documented, i.e. that one parent raises a chick successfully?
Top

Rita, I'll be back to answer you in a little while.

Chimega: So Louis seems to have another nest/female/clutch in a nest nearby. Do you think that Iris could
manage to successfully raise this chick? Because she has to leave the egg unguarded when she hunts. I would assume that the location of the nest gives a certain security against predators than a nest deep in the woods?

What do you think? Has something like this been documented, i.e. that one parent raises a chick successfully?

Yes, Louis does have at least 2 nests, Hellgate in Missoula and also the Baseball Stadium Nest in Missoula. Midas did not return so Louis set up shop with his mate, Star is what we call her, although that's not an official name, yet.

Dr Greene came out with a statement tonight, saying that Iris has laid a 3rd egg. No one saw her lay this egg so we don't know how he knows that but she did have 2 eggs, not just one. A great researcher and lover of Ospreys that I know, has said a female cannot do this alone. Especially not to lay the eggs, incubate, fish for herself, then fish for herself plus a chick or 3 and expect it to come out well and I firmly believe that as well. If she was able to do that, she would be the first Osprey on record, to ever have done such a feat. We will see what happens.

Oh and as for predators, there are Ravens and Bald Eagles in the area. Both are known to take Osprey chicks from the nest and the Ravens will for sure take eggs so the nest is in jeopardy because of those 2 predators.
The woods are lovely, dark, and deep,
But I have promises to keep,
And miles to go before I sleep,
And miles to go before I sleep.
Top

Iris had not received fish from Louis again, so she went out to get her own. She caught a fish in around 10 minutes, took it to the Owl Pole and began eating. About 10 minutes later, something overhead scared her bad enough to make her leave. In flying from the pole to the nest, she lost the fish. Some of us think it was a Bald Eagle that frightened her because the look on her face was that she was very scared and I really doubt she would be this scared of another Osprey or Louis. Video will follow in the next post.

Deer seen walking through the woods behind Iris and her fish. 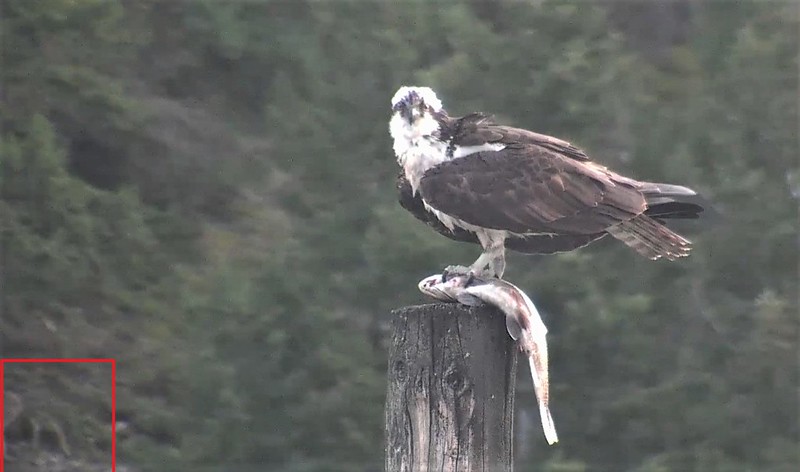 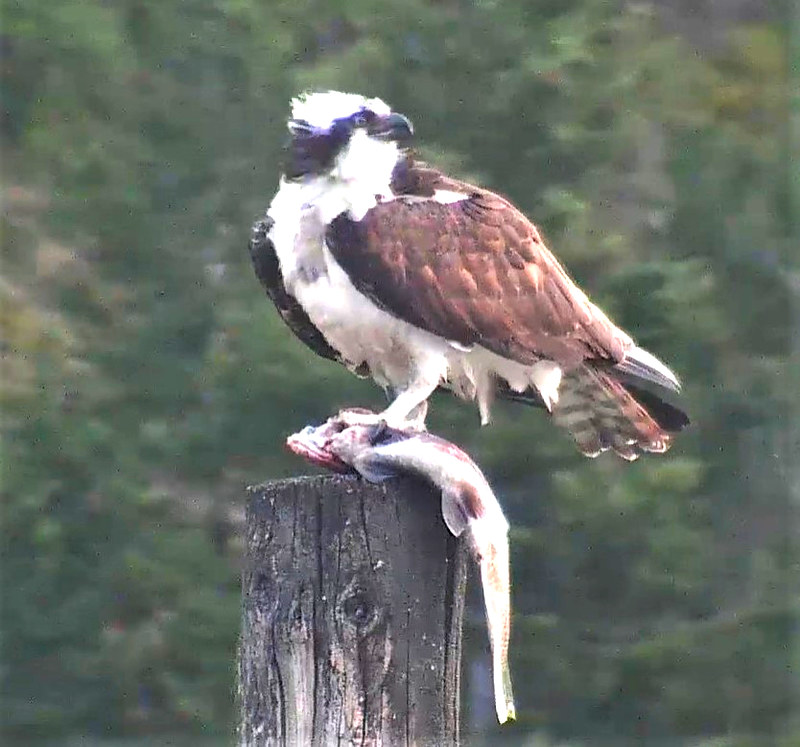 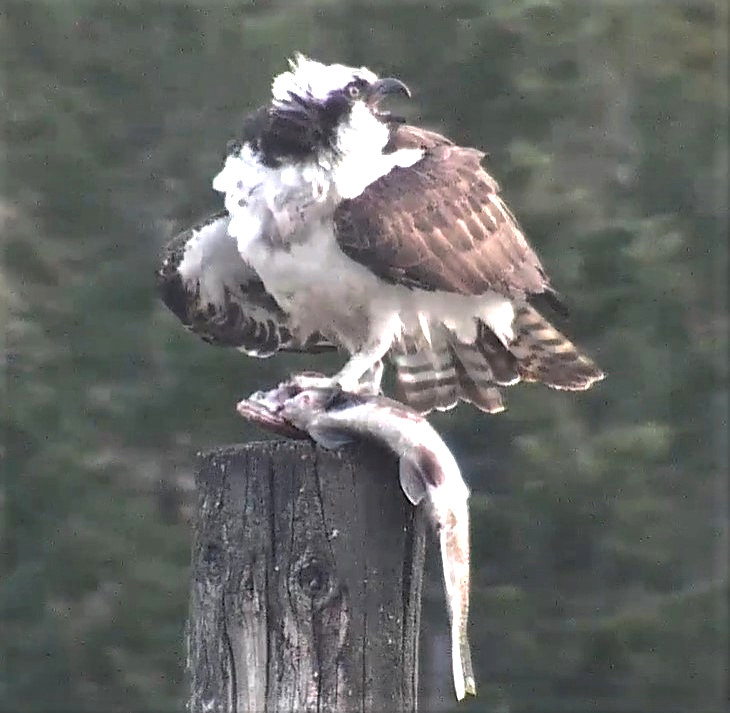 Louis has not brought fish for days but stops once a day to mate. Then promptly leaves. Very upsetting to all who watch and to poor iris.

Iris had a scare earlier this morning and as I am told, off and on all day with something upsetting her, causing her to leave the nest or alert and lay down. No one knows for sure what that was but I did see Ravens flying around in the lot near the nest and saw her ducking down. But surely a Ravens can't scare her like whatever scared her in previous day's videos.

After disappearing from view for around 5 - 6 hours, she returned with a huge crop and a huge fish.