We are now in possession of the post mortem report for Chick 2.
The post mortem was carried out by Dr Mark Stidworthy, veterinary pathologist with International Zoo Veterinary Group Pathology.
It states that the cause of Chick 2's death appears to be pneumonia and lung haemorrhage associated with lungworm infestation, together with acute blood loss anaemia. The report also indicated that the middle chick was likely to have been a female.

It has been a very difficult week for us all at Glaslyn and we have really appreciated your overwhelming messages of support. We would also like to take this opportunity to say a big thanks to those of you that have donated towards the costs of the post mortem.
Diolch yn fawr
Top

Many thanks seira for that information.

Such nice close up, Mrs.G is still trying to cover her big babies. She is such a beautiful and devoted female osprey. 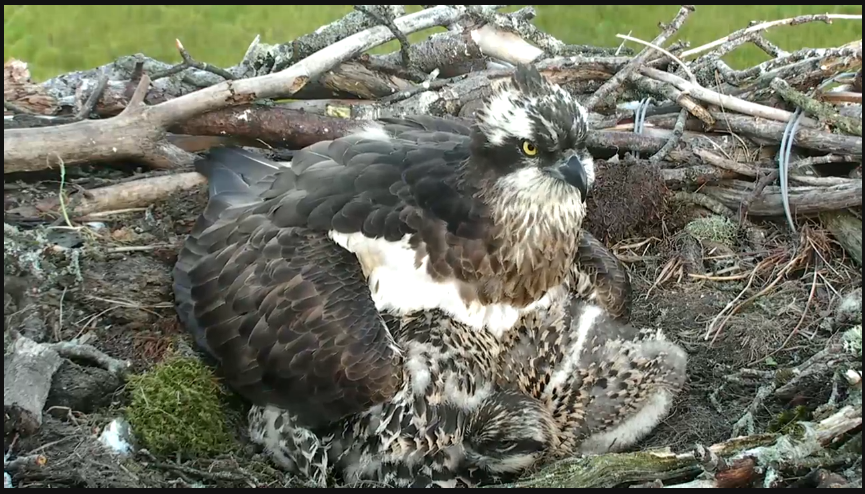 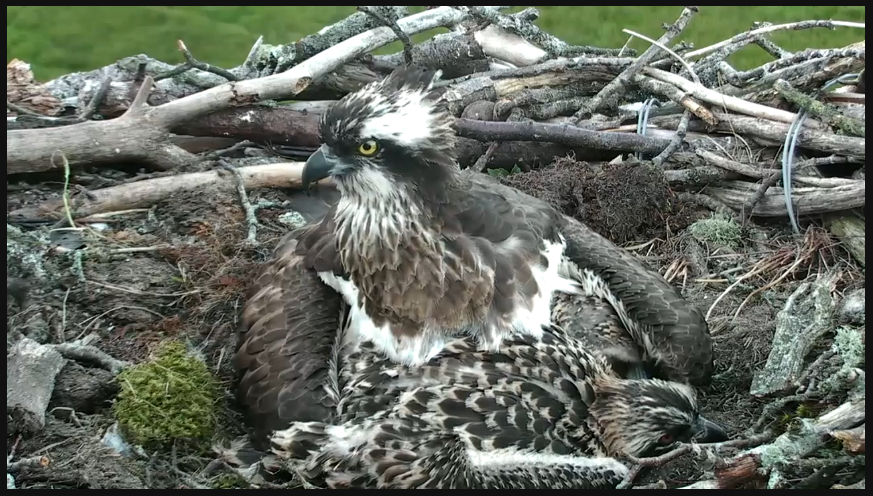 https://www.facebook.com/BywydGwylltGla ... 7094815205
The chicks were ringed this afternoon and the results are on the image below.

Bywyd Gwyllt Glaslyn Wildlife - Glaslyn Ospreys :
The original plan was that we would use the KS0 ring from last years batch for the eldest chick and use the KA0 ring for the youngest chick. The Dyfi chicks, being next in line to be ringed, would then be KA1, KA2 and KA3.

The PVA bonding on the KA0 ring set perfectly, but it did not adhere on the KS0 ring, so the ringing team had to use the next available ring, which was KA4. Strangely enough they tried to use the KS0 ring on the eldest Glaslyn chick last year, but the glue would not bond then either, so looks like the KS0 ring is not quite right.

https://www.facebook.com/BywydGwylltGla ... 5621332019
Here it is! We hope you enjoy.
As you can see, KA4 was meant to be KS0, but for the second year running, the ring would not glue properly. This is why she was eventually ringed with KA4.
Top

seira, thank you for sharing! 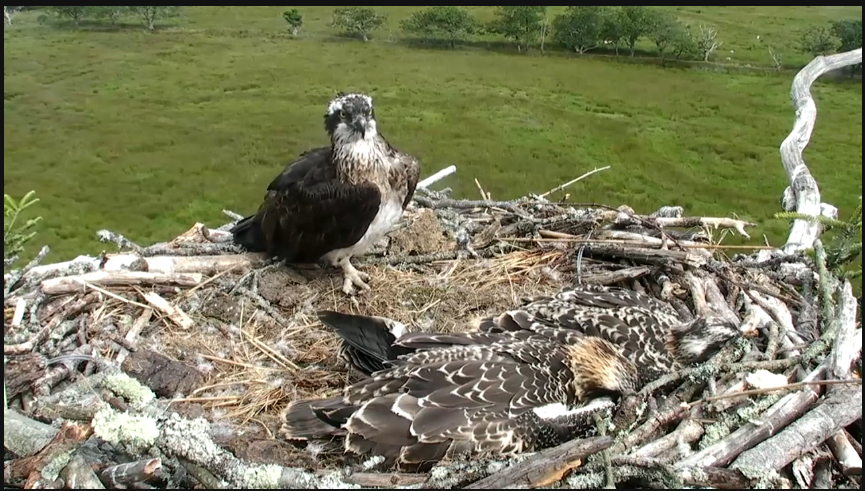 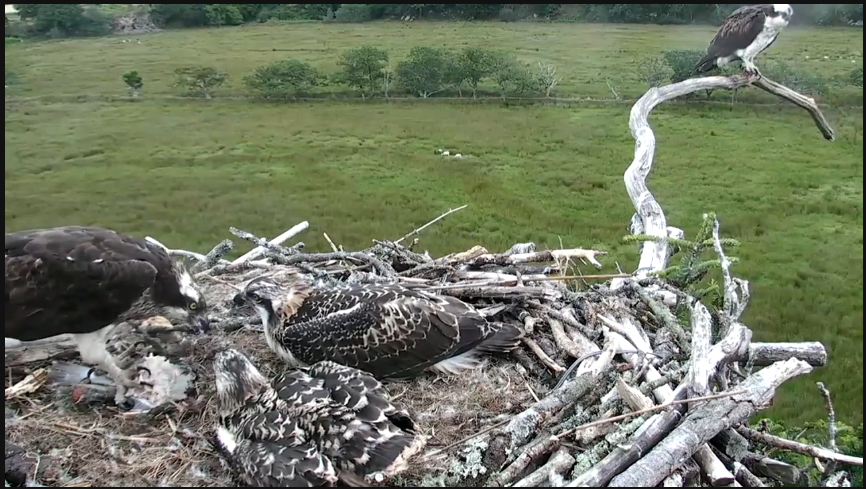 Aran with flounder for his family. 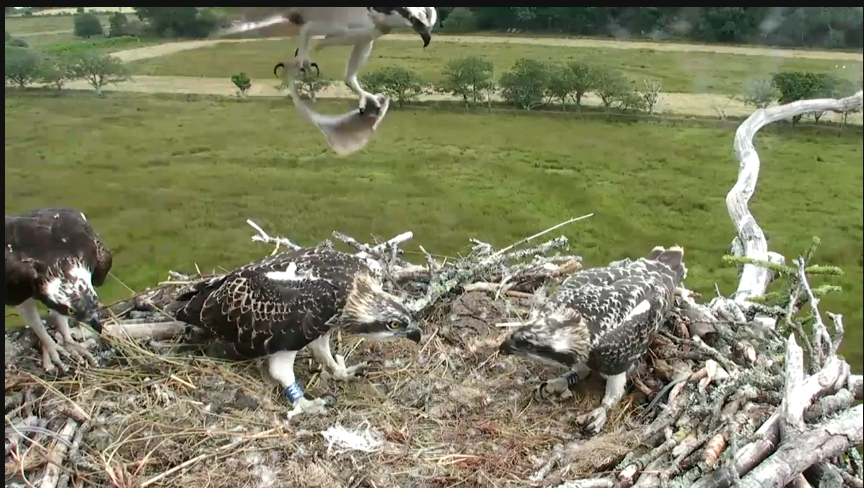 Mrs.G and Aran are feeding in tandem- modus. They are great parents! 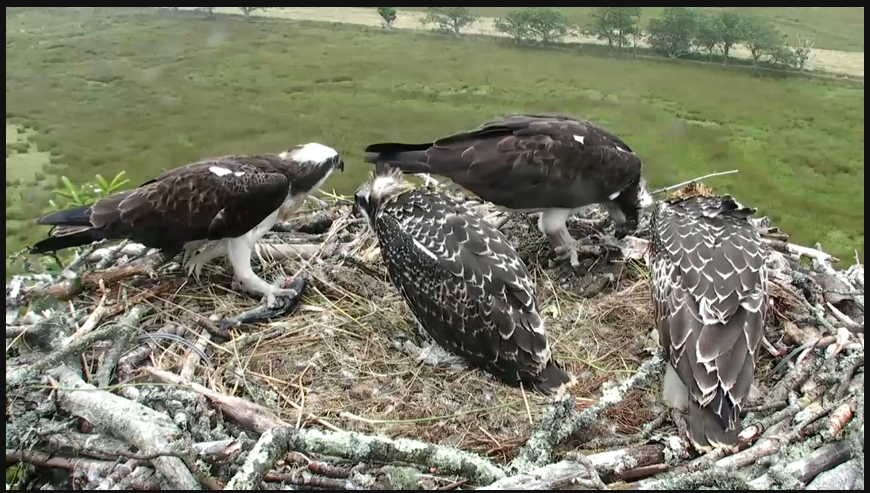 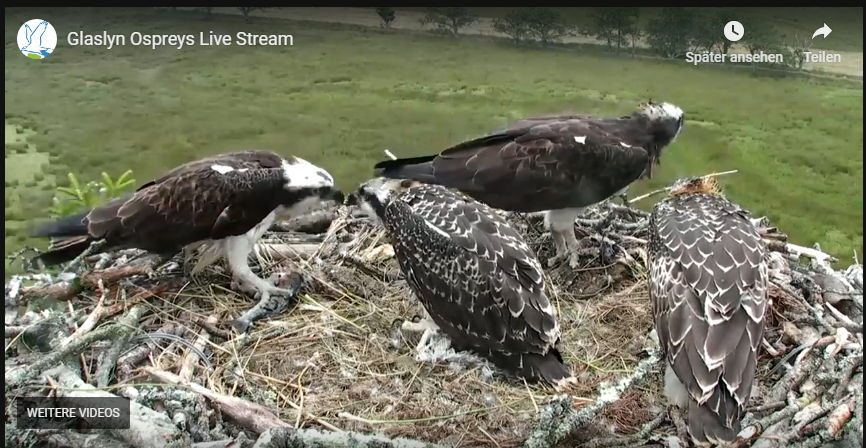 https://www.facebook.com/BywydGwylltGla ... 8756740372
KA4 finally took to the skies for the first time at 17:11 this afternoon. She made a short controlled flight around the nest site before confidently landing back on the nest. Apologies for the dead flies on the camera!

https://www.facebook.com/BywydGwylltGla ... 5670021014
Here is the video of KA4's first flight yesterday afternoon. This morning she also mastered landing on the perch!
How long will it be before KA0 follows in her footsteps?

Mrs.G with her youngest chick. 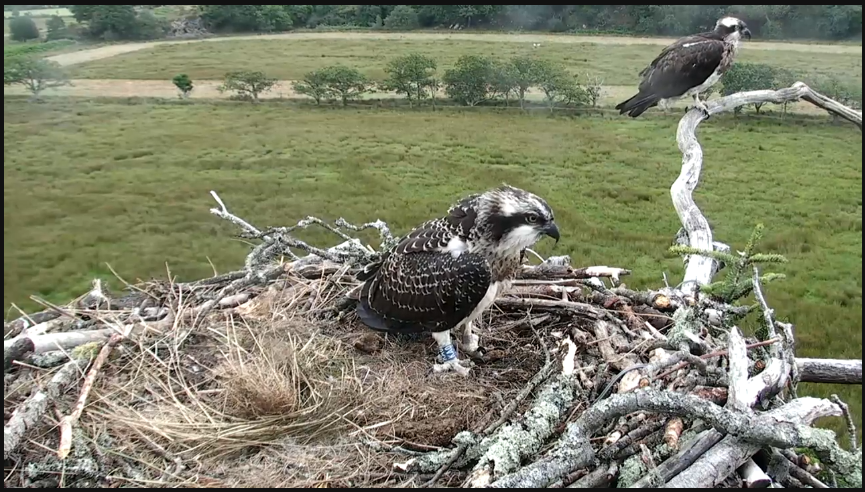 In the late evening the fledgling is home with the sibling... 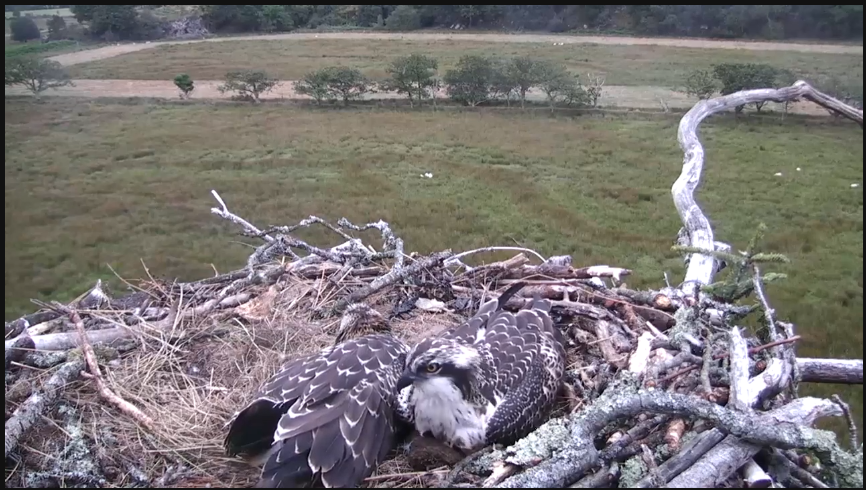 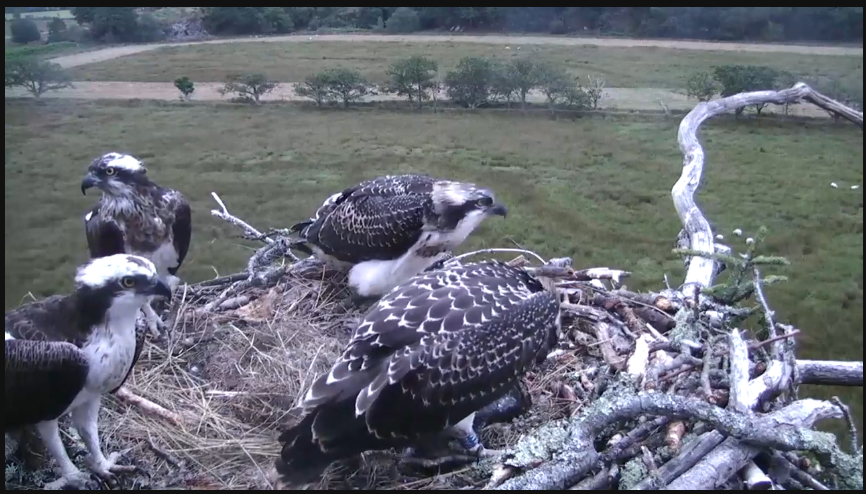 Thank you for updates, seira!

KA0 finally fledged at 18:00 this evening!
At 59.5 days old she is officially the oldest Welsh osprey to fledge the nest. She made a short flight around the nest area before confidently landing on the perch.

https://www.facebook.com/BywydGwylltGla ... 0849356496
Here is the moment KA0 finally took to the skies yesterday at 18:00. Apologies for the wool covering the camera, it seems to move every day to block the image we most want to see!
Top

https://www.facebook.com/BywydGwylltGla ... 6788982902
KA4 reached another milestone yesterday when she flew from the nest with a fish for the first time. Unfortunately she returned shortly afterwards with something else in her talons. KA4 had some trouble removing some bale wrap from her talons, although it didn't seem to be wrapped around her foot. Mrs G, who was perched in a nearby tree, heard the commotion and flew to the perch. Thankfully, when KA4 returned, the plastic fell off as she opened her talons to land on the perch next to her mother. Hopefully she'll think twice before picking up plastic from the field again!

https://www.facebook.com/BywydGwylltGla ... 6582392256
KA0 may be five days younger than her sister but she has no problem holding her own when it comes to taking fish from KA4's talons. She has even taken fish from Mrs G before she's even had a bite! At least we know size or age doesn't affect her dominant personality.

https://www.facebook.com/BywydGwylltGla ... 1629285418
Aran seems to be growing wiser with age. Yesterday he delivered a fish to the perch where KA4 and KA0 were waiting for breakfast, but haunted by memories of last year's dropped fish incident, he decided against attempting a perch takeover and instead delivered the fish to the nest. He waited for a while, but when none of the fledgelings showed any interest he took the fish off to eat for himself. A good case of learning from your mistakes!

https://www.facebook.com/BywydGwylltGla ... 9509324630
Here is the latest blog featuring all the fledging information and videos should you have missed them, including an updated summary of all Glaslyn osprey fledging ages.
Top

Great to read and see that Mrs.G is still with her family. Thanks Ferenz 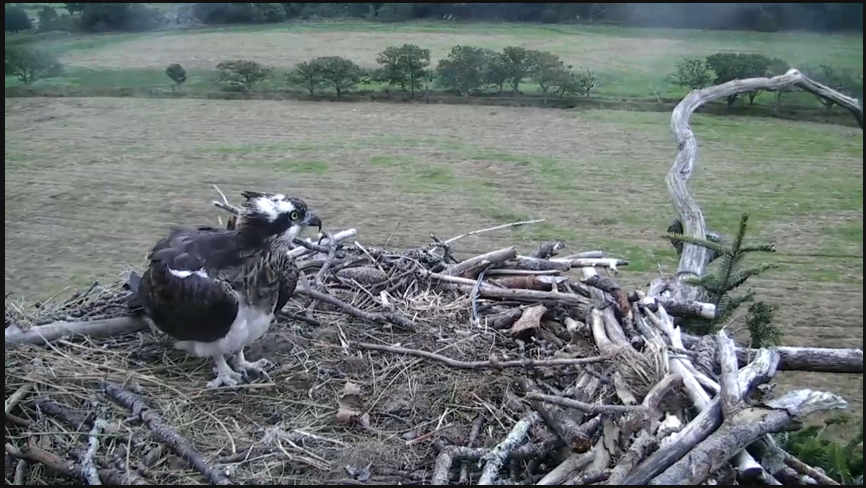 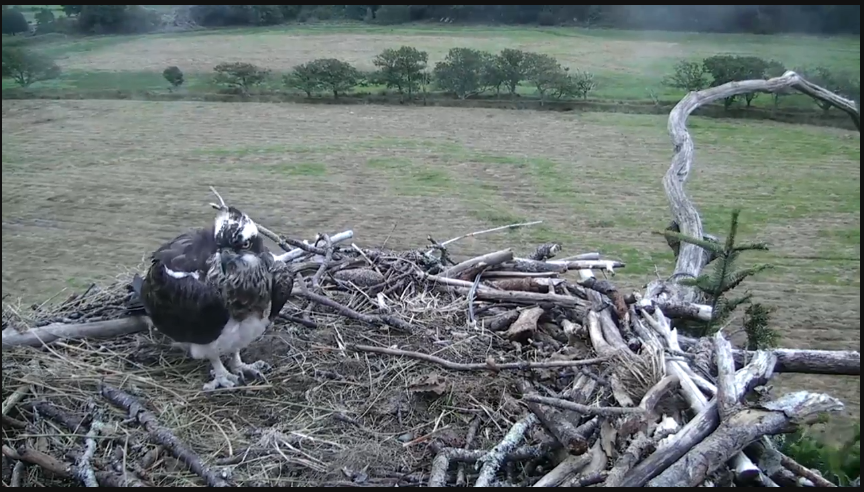 https://www.facebook.com/BywydGwylltGla ... 0710679843
Mrs G appears to have possibly sustained a slight injury to her rear right talon. It does not seem to be causing her any problems, although she seems reluctant to put her full weight on it at the moment. We are monitoring her, but there is nothing else that we can do at this moment in time.

Mrs G caught a very large fish early yesterday morning, which she took to her favourite oak perch to eat. The fish lasted her most of the day and she was not prepared to share it with either of her two chicks.

We will continue to monitor her and keep you posted about the situation. https://www.facebook.com/BywydGwylltGla ... 2661709648
Aran should have known better than to present KA0 with a stick rather than a fish when she was hungry. The feisty KA0 promptly let him know this was unacceptable and off he went to go fishing. Visitors were treated to a wonderful sight of him crossing over the visitor centre towards the estuary and no more than half an hour passed before he was on the nest again delivering a very lively flounder to his demanding chick.
Top

https://www.facebook.com/BywydGwylltGla ... 4537084127
Although Mrs G didn't seem to want to put any weight on her right talon when she landed on the nest yesterday, she later returned to the oak tree with a fish. A sizeable one at that! Her talon clearly isn't disrupting her fishing so hopefully it will heal over the next few days before she begins her journey south.

https://www.facebook.com/BywydGwylltGla ... 1817289399
Mrs G landed on the oak perch with a large live fish this afternoon and perched next to KA4 who had just received a brown trout from Aran on the nest. We noticed Mrs G was carrying the fish in her right talon, the one we thought she may have injured, so hopefully this means it isn't bothering her too much!

Bywyd Gwyllt Glaslyn Wildlife - Glaslyn Ospreys :
Although she still seems reluctant to put full pressure on the foot we believe that it is not causing her any major issues. She has fished for herself again today and caught a large fish, which she bought back to eat on her favourite oak perch.
Top

Today we witnessed Mrs G again attempt to steal a fish from one of her chicks. We have seen this behaviour more regularly this season, with Mrs G still also food soliciting to Aran even though she is capable of catching her own fish. We know she brings fish back to the nest area almost daily but does not share her food with the youngsters, unlike female ospreys on other monitored nests who have been seen to occasionally provide for their family too.

Does anyone have any theories as to why Mrs G has adopted this rather unusual behaviour?