The First Chick hatched at 11:42 this morning.
A slight dent was spotted in the egg late last night and by early this morning it was clear that a hatching was progressing well. It was fully clear of the shell by 11:42.
We're glad to share this exciting news after such an anxious week!


https://www.facebook.com/BywydGwylltGla ... 4787680436
Aran has now, thankfully, returned to the Glaslyn nest. Although Tegid has still been seen in the area, he has not visited the Glaslyn nest at all today. Mrs G has finally had a fish, her first since Tuesday and Aran has just brought another back to the nest!
Catch up with all the news on the blog:
https://www.glaslynwildlife.co.uk/…/ara ... -after-nes…/
Top

The second chick was fully clear of it's shell by 10:26 this morning. Mrs G has already tried to offer her latest chick food, but it is currently sleeping after working so hard to break free of the eggshell.
Top

Ferenz thank you for these lovely pics from that nice family with three little cuties.

Aran brought that huge fish to the nest, Mrs.G takes it from him and starts feeding the babies. 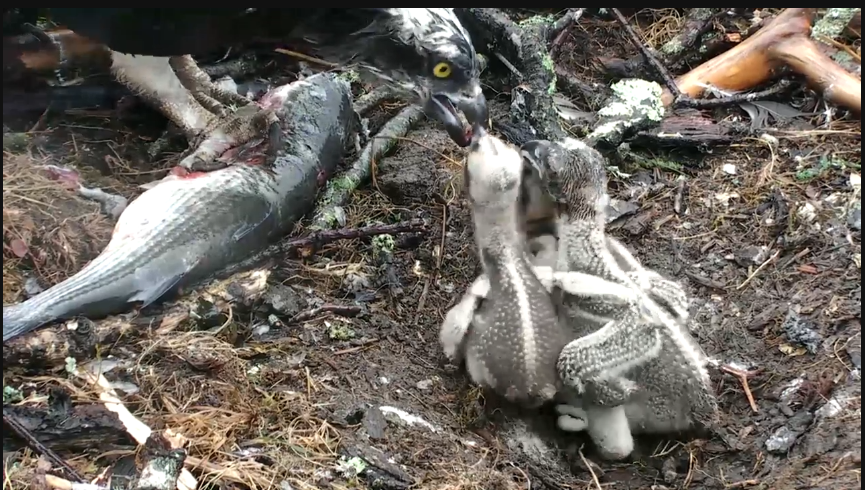 Later she covers her chicks again, it's an rainy weather there. Aran shakes his feathers. 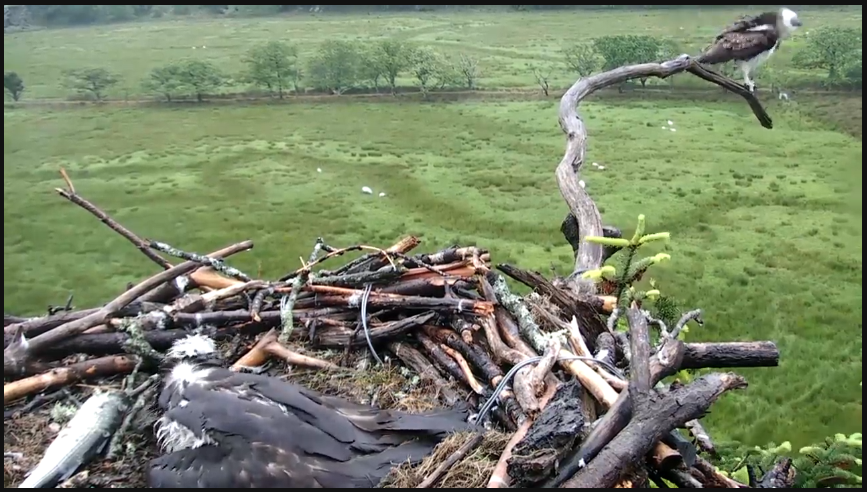 What for difference in size, impressive. 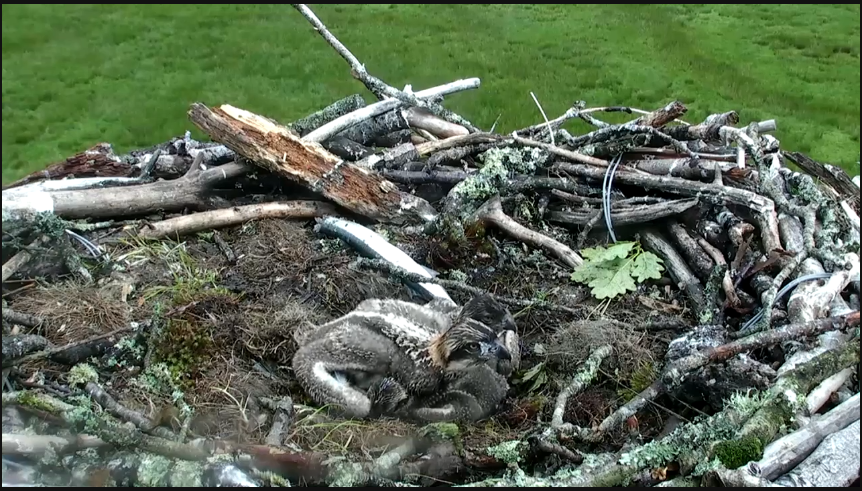 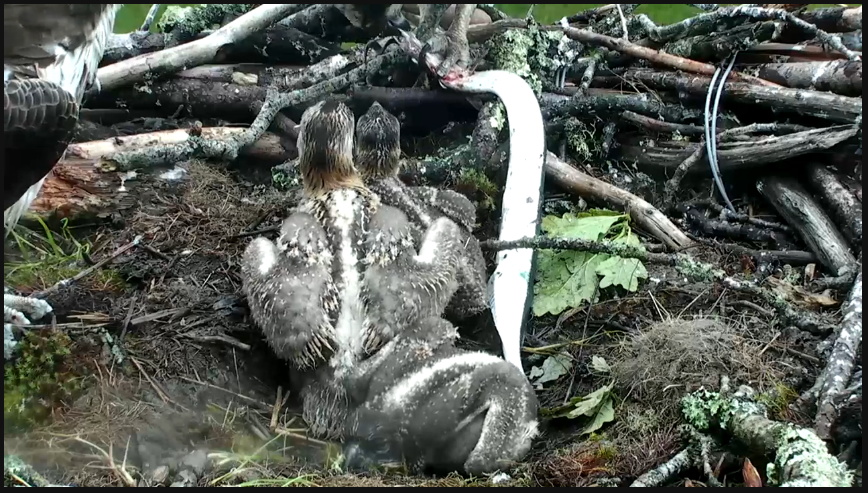 The biggest covers the other two. 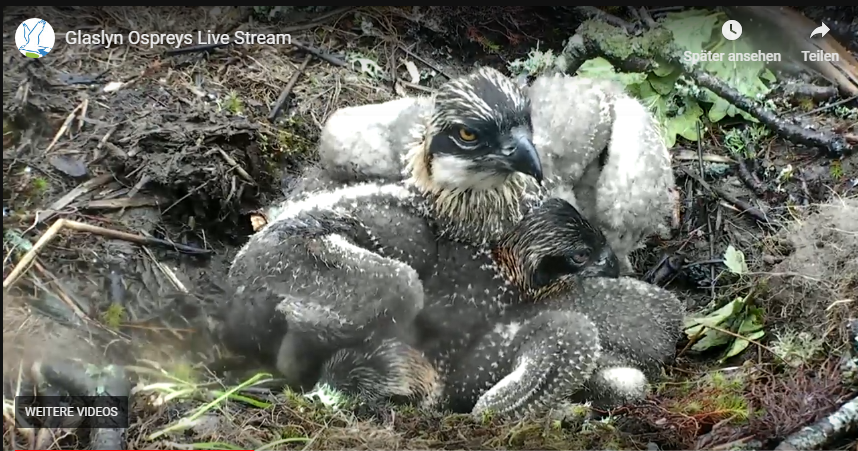 At just before 07:30 our middle chick sadly died in the nest.
We will never know exactly what happened, but the negative reaction to food on Thursday night was clearly a trigger for what looked like a lack of appetite during the following two days.
We are all devastated at BGGW, but we must move on and concentrate on our other two chicks. It has been over 10 years since Mrs G had a chick die in the nest, so we have had a good run.
Both in 2006 and 2007 when a chick died in the Glaslyn nest, Mrs G carried the body over the nest side on both occasions. We will probably see the same behaviour again.
We open the project as usual today, we will carry on with a brave face despite our chick from the 50th egg not making it.


https://www.facebook.com/BywydGwylltGla ... 5229329725
You will be aware that at 10:48 this morning, the third chick fell onto its back and has been unable to remove itself from that position. It is unclear if something caused the chick to fall or if some damage has been caused as a result of the fall which meant the chick was not able to get up.

After consulting with experts including Dr Tim Mackrill and considering the terms of our disturbance licence, we took the decision to intervene. This decision was made with the belief that this disturbance would not affect the eldest chick, who is only a few days away from reaching the age at which ringing can begin.

We cannot assess the damage the fall may have caused, but we believe we have given the chick the best chance of survival. The second chick that died in the nest this morning has been removed and will be sent for analysis.

We do realise how difficult it has been for you to witness this on the live streaming but thank you for understanding that these actions and decisions cannot be taken lightly.
Top

Sad news, but thank you for sharing seira. I peeked in yesterday, cannot watch much although I like Aran and Mrs.G very much. They are great parents.
The nature needs us not, but we need the nature
Top

I scrolled back and saw a feeding from Aran to the youngest chick, it has eaten very well and with appetite, but then it fell on his back without reason and was not able to stand up again. The chick tried it again and again, I've not seen that before. 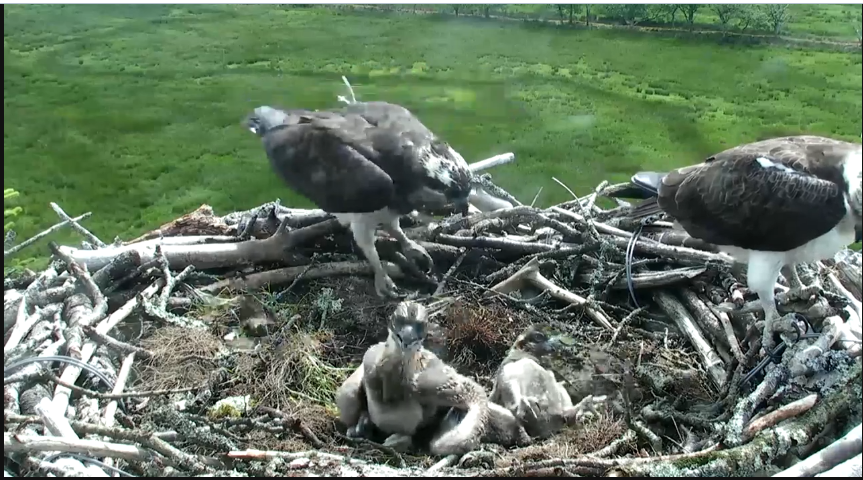 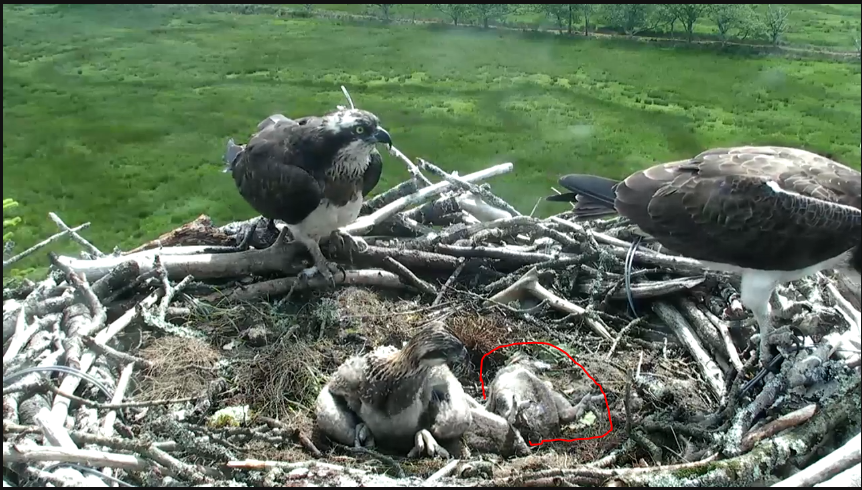 Tried to stand up, hopefully it has not the same disease like the other chick.

I have really sorrow about the little guy. 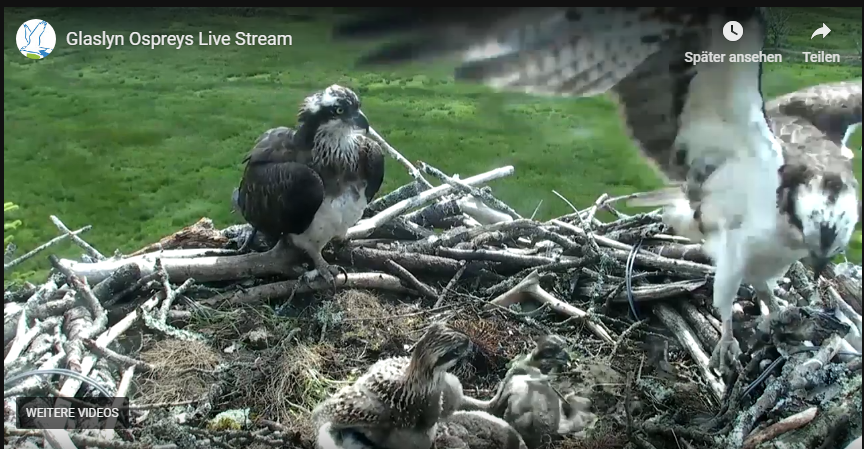 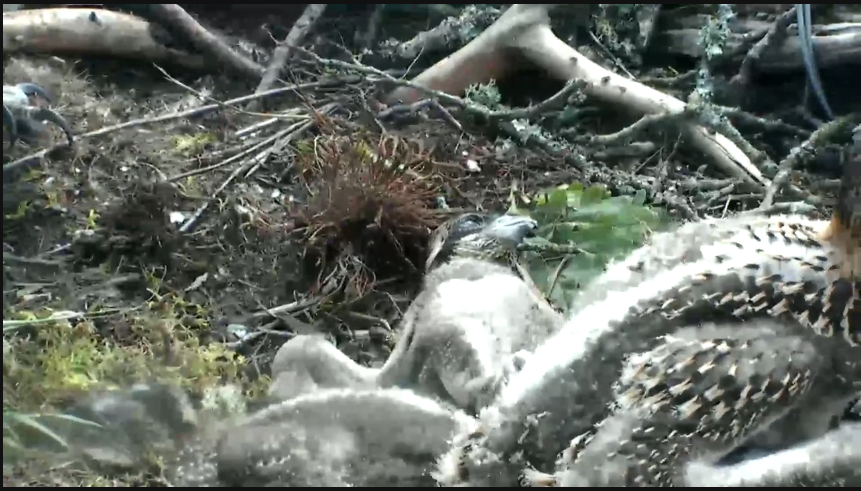 Two hours later the chick layed still so, then the stream was interrupted. Then the dead chick was not more at the nest and the other seems again healthy.

Edit: Just now I have read the second part from your post, seira, so they have intervened. That's a good decision, but I'm very worried about this little one...
The nature needs us not, but we need the nature
Top

The young chick seems better today, it's eating well, preening, sleeping how usual. Hope it is good.
Dad is feeding him at first, then Mrs.G comes home and wants to feed him. 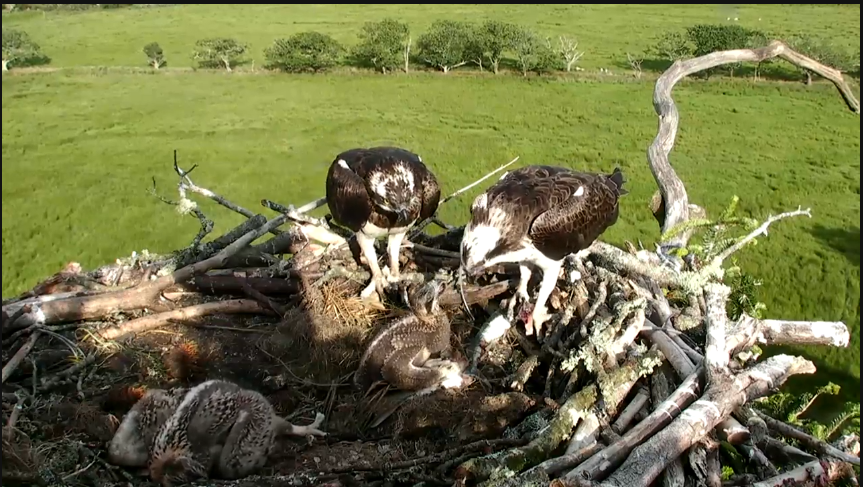 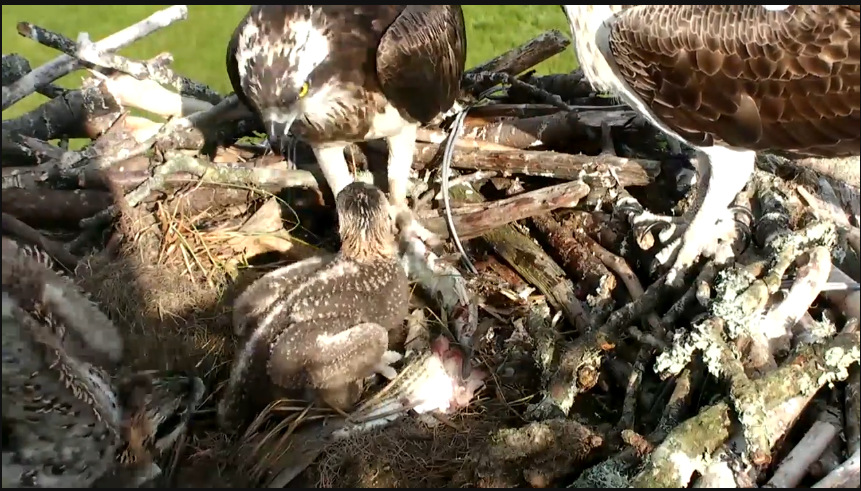 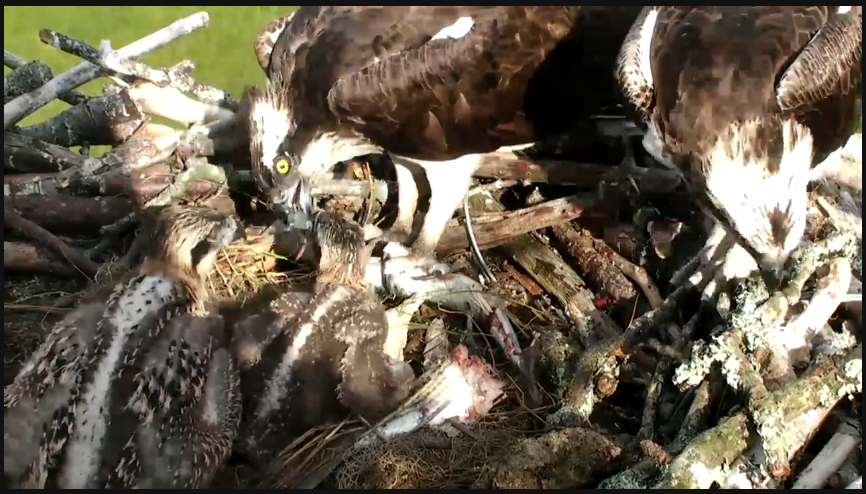 https://www.facebook.com/BywydGwylltGla ... 9409161307
Tonight's blog is an attempt to summarize the unfortunate events of the past few days. Nature certainly is unpredictable and this isn't a blog we ever expected to have to write, but the privilege of having an insight into the lives of these birds can sometimes be difficult. Thank you again for your continued support and response to the last post. We will share with you the information we receive about the middle chick as soon as we are able.