Here is the moment KC3 launched into the air at 9.36am this morning. He intended to land on the perch next to KC2 but missed the landing.

KC3 nearly landed on Mrs G on many occasions during his maiden flight and displaced KC2 who was on the perch before managing to land safely. It is fair to say his first flight was quite the adventure!
Top

Some moments from today: 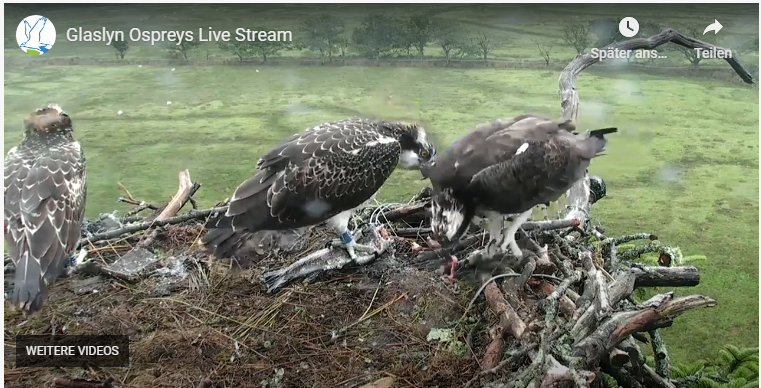 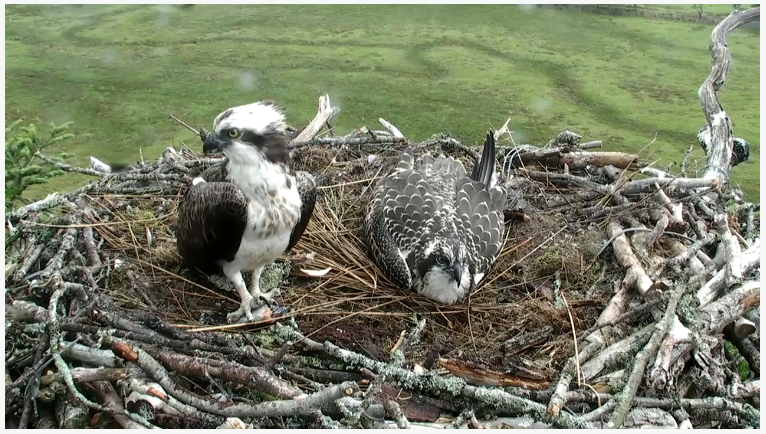 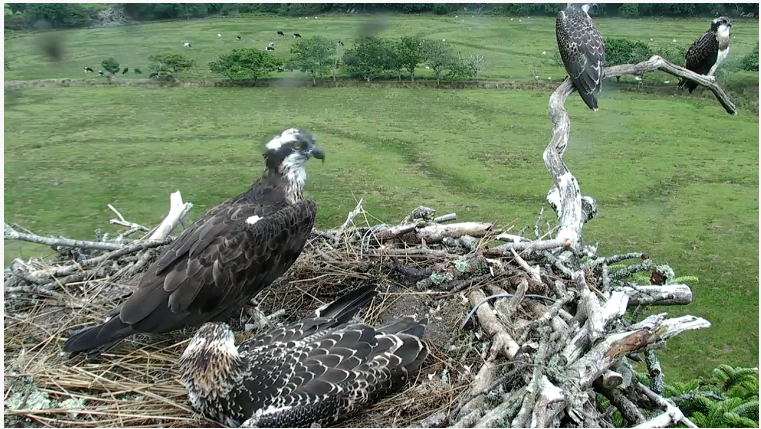 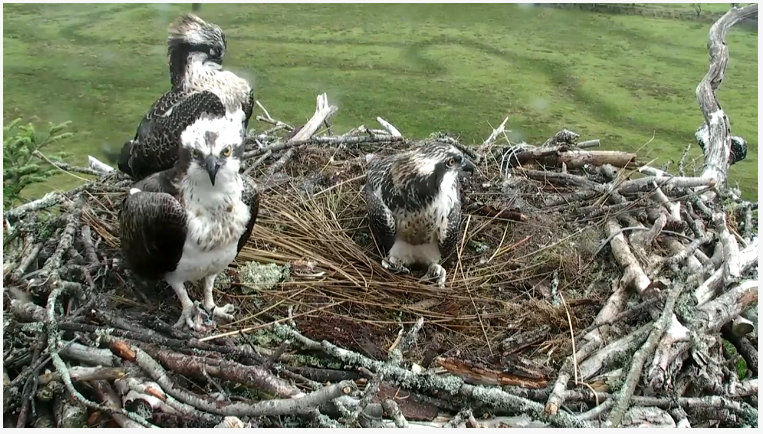 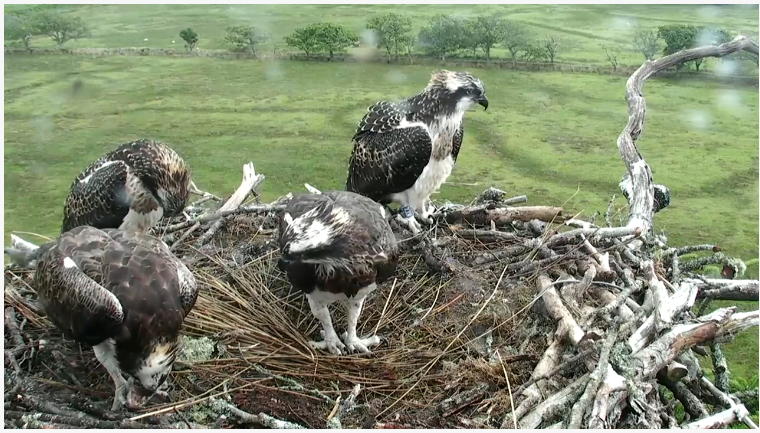 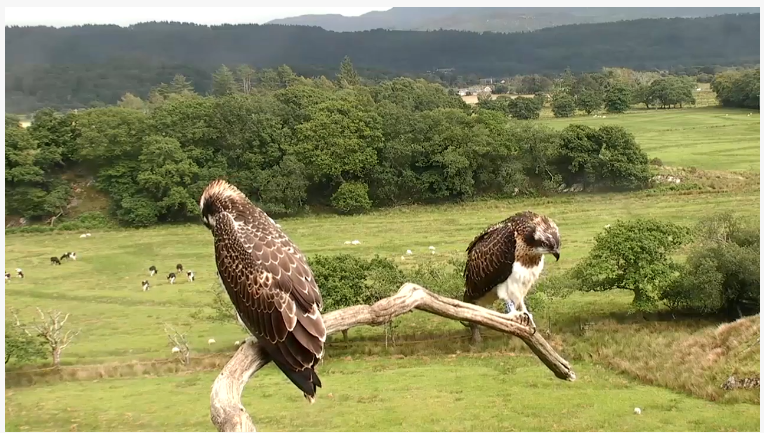 The youngest, KC4, that time alone at home. KC2 and KC3 enjoy their flights. 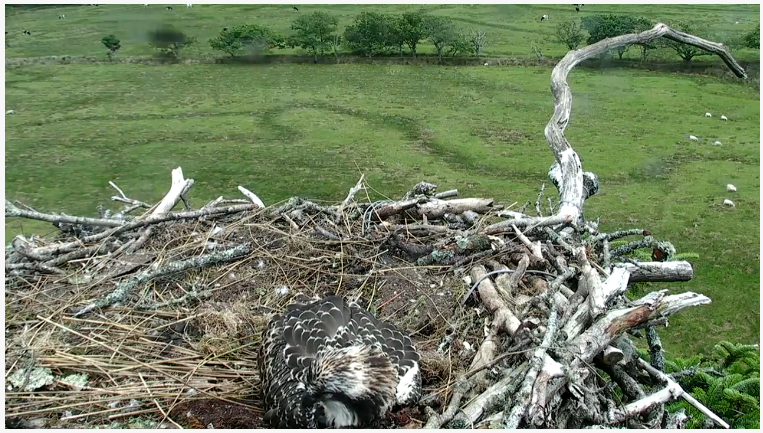 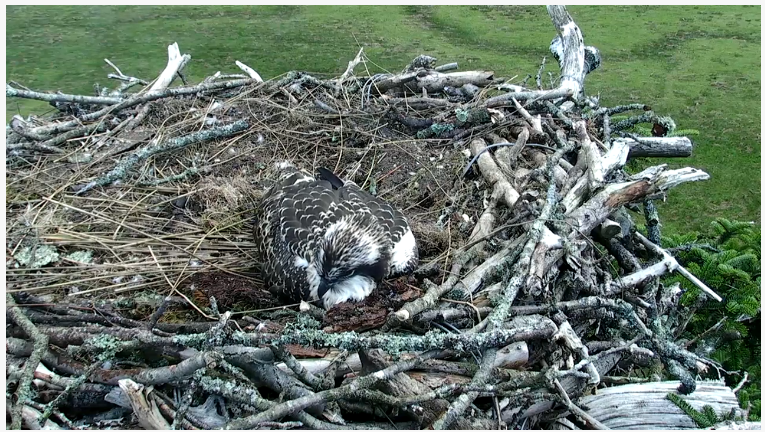 https://www.facebook.com/BywydGwylltGla ... 1136558464
Here is the video of KC4 fledging yesterday. A very confident first flight it was too!
Top

seira thank you for the news.

So all three are successful fledged. Such a good season for the Grand dame Mrs.G and her partner Aran.
They are amazing parents.

Aran with an huge fish for KC2, and that by the rainy weather. He is a great provider. 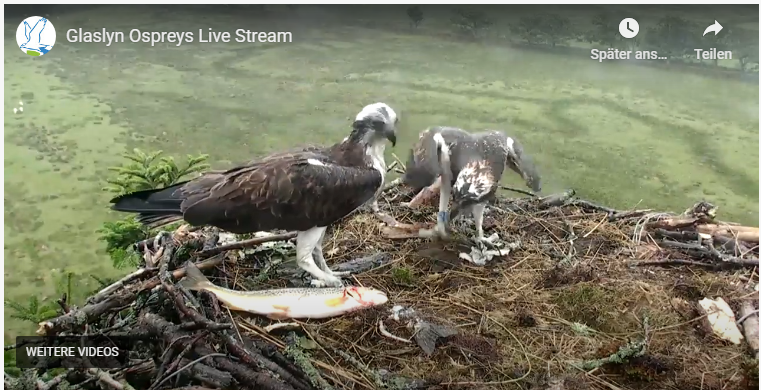 The fish is still alive. 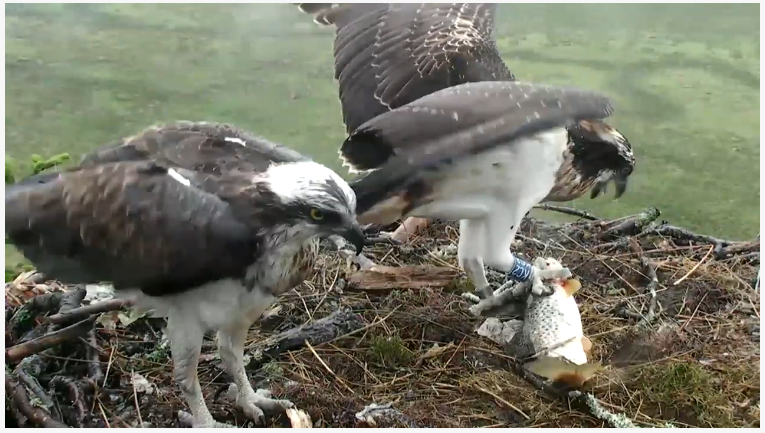 Meanwhile KC2 is sated, soon Mom will come and take over the fish. 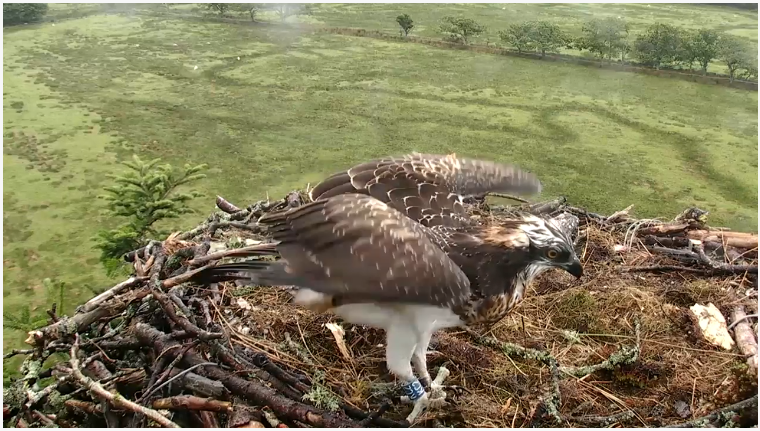 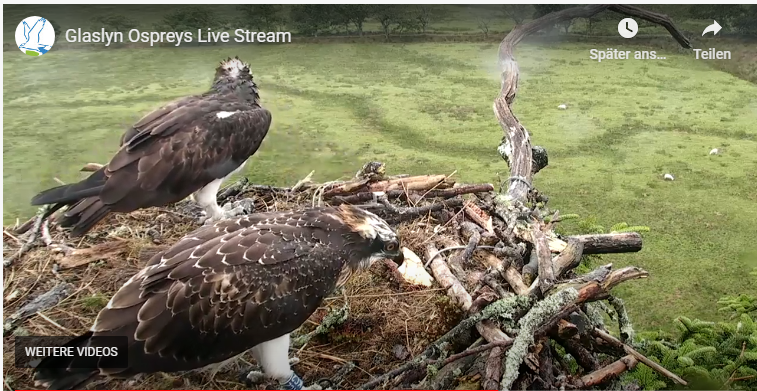 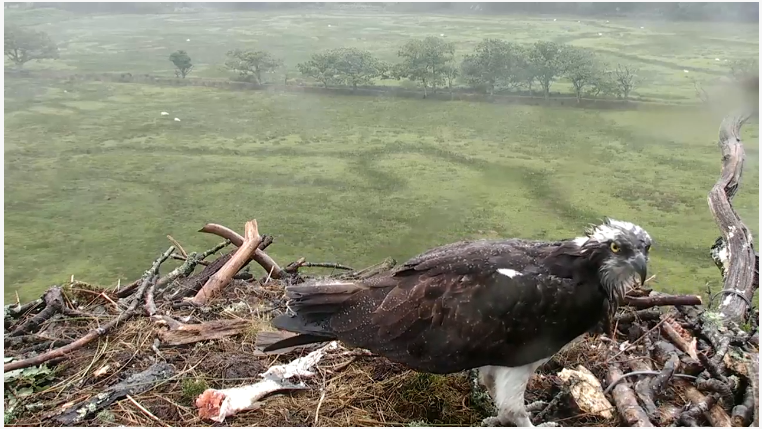 So the third one, KC3, can eat from that huge fish. 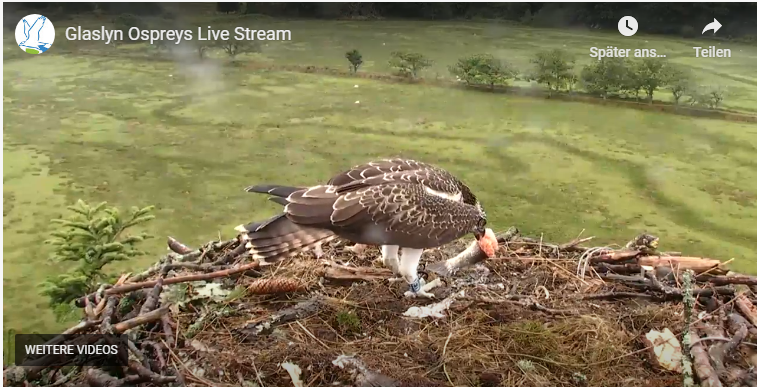 KC3 is eating, Mom is resting. 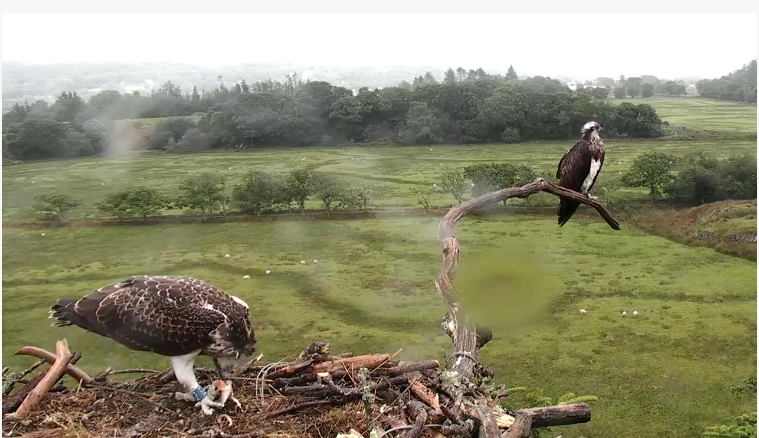 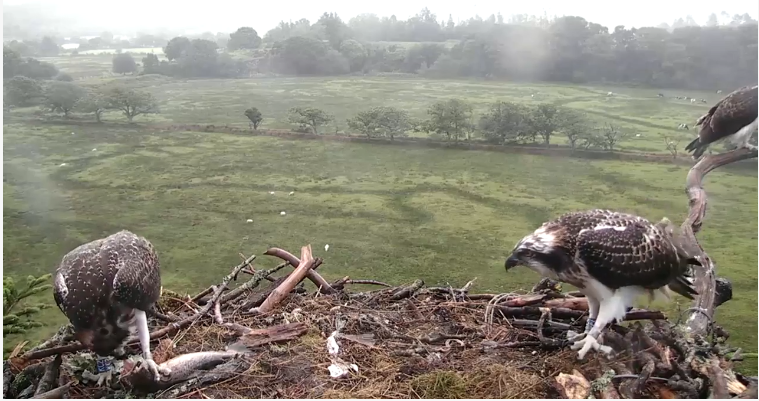 https://www.facebook.com/BywydGwylltGla ... 2005209377
Over the past couple of weeks, we have seen the chicks regularly perched in a dead tree not far from the footbridge by the protection caravan. We have seen them diving down from the perches on occasions, and we suspect they are practising diving into the water and possibly even entering the water. On one occasion KC3 arrived at the nest wet after we had witnessed this behaviour.

On Saturday morning, we could see two of the chicks on the tree again, but this time they appeared to be divebombing something rather than making practice dives. It seems Ospreys develop a dislike for herons at an early age!


https://www.facebook.com/BywydGwylltGla ... 2422218002
Yesterday evening we saw Mrs G returning to the oak tree below the nest carrying a fish. This is the first time we have seen her bring her own fish back since the beginning of April when Aran returned. Even though she has started fishing for herself again, she will still ask Aran to bring her some fish as well.

https://www.facebook.com/BywydGwylltGla ... 0592310185
Poor Aran nearly lost a talon last week as the eager chicks tried to take more than just the fish away from him.
Top

https://www.facebook.com/BywydGwylltGla ... 1621638082
Eagle eyed veiwers were quick to alert us to this beautiful Tawny Owl that visited the nest in the early hours of Tuesday morning.
Top

https://www.facebook.com/BywydGwylltGla ... 1411109103
Back in June we shared the exciting news that Glaslyn born Blue KS1 (2018) had been resighted in north-west England. KS1 remained in that area for a while, but she has obviously moved on.

Yesterday we received news from Rosie Shields of Borders Ospreys, that KS1 had intruded on their nest on 7th August. She stayed for several hours and even managed to steal a fish brought by the resident male "Samson", from right under the beak of the female that Samson has been bonding with this year, Rutland hatched 3AF (2017), who has been named "Astra". 3AF tried to steal the fish back, but in typical KS1 style she hung on to it and 3AF eventually gave up.
Borders Ospreys are in Jedburgh, which is not far from Kielder Forest where there is a growing population of Ospreys, including two of KS1's half brothers. We wonder whether she may turn up there next?

Thank you to Rosie and Borders Ospreys for allowing us to share the photos and news with you.

https://www.facebook.com/BywydGwylltGla ... 7504019827
Mrs G had a case of butterfingers this afternoon. She got the flounder in the end!

https://www.facebook.com/BywydGwylltGla ... 1927112718
New blog!
As of today (Wednesday 19th August), the three chicks are aged 91, 90 and 87 days old respectively. At some Osprey nests, chicks of this age may have already begun their first migration south, but Glaslyn chicks have a tendency to stick around a little longer than normal. Why do we think that is?

We have seen everyone today except for eldest chick, KC2 who was last sighted on Monday morning.There are only four family members in this image. We have not seen KC2 since 09.58 on Monday morning. Has she started her migration already? It is certainly starting to look that way. 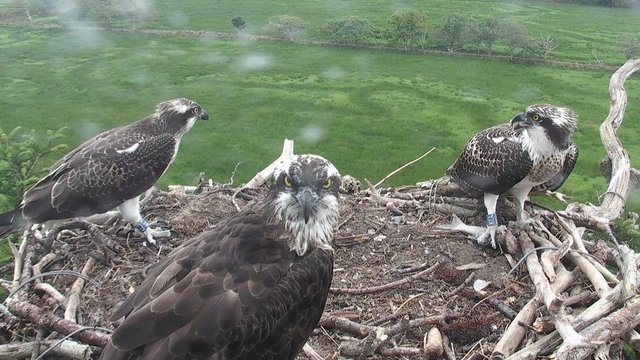 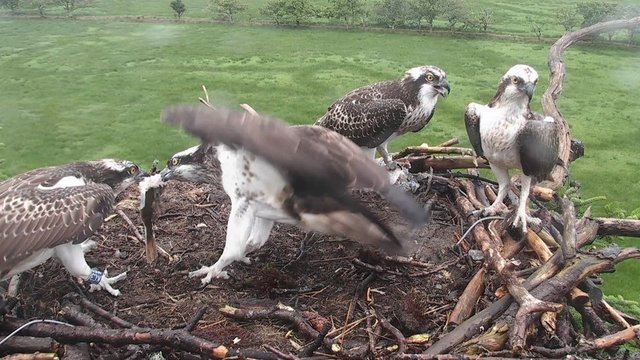 Aran delivered another fish for KC4

KC4 on perch and on the nest awaiting Aran's flounder, KC3 joined her...

KC4 took off and let the tail to her brother...