Ole Friis Larsens comment in English to the situation about the bad eye of the young WTE in the nest: -

Save the chick? Maybe

Skreve af (written by) Ole Friis Larsen den 14. maj 2021 kl. 14.35
The camera shows wildlife as it is on the nest, and the policy of DOF/BirdLife Denmark is not to intervene, though there might be situations, in which we would act.

We don't know whether a one-eyed young eagle would be able to survive or not. It is normally presumed, that a raptor will not be able to hunt - and survive - with only one eye, but some experts believe on the contrary, that it is possible, especially for a chick like this, if it can't see with the left eye, when it leaves the nest. If it learns to hunt from scratch with only one eye it might have a chance.

On the other hand, it is also not possible for us to provide a better life for the eagle in captivity, so it makes no sense for us to 'save' it. In some countries, there are centres able to handle such birds and use them in breeding programmes, but there are no such programmes including White-tailed Eagles because the population do well all over Europe without such support.

If it was removed from the nest and sent to a wildlife rescue station, it must be euthanized according to Danish law, if it is not possible to bring it in a condition, where it will be able to survive again as a wild bird.

As the circumstances are, there is no other possibility than to let the young eagle grow up and fledge the nest. It is the best, we can do for the bird, and we think it might have a chance.

A Starling is singing its morning tune up right 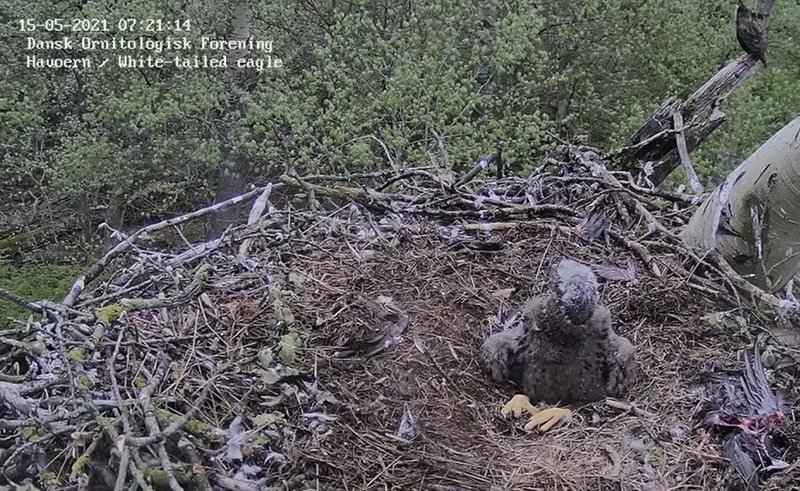 The eaglet is tasting the nestover wings 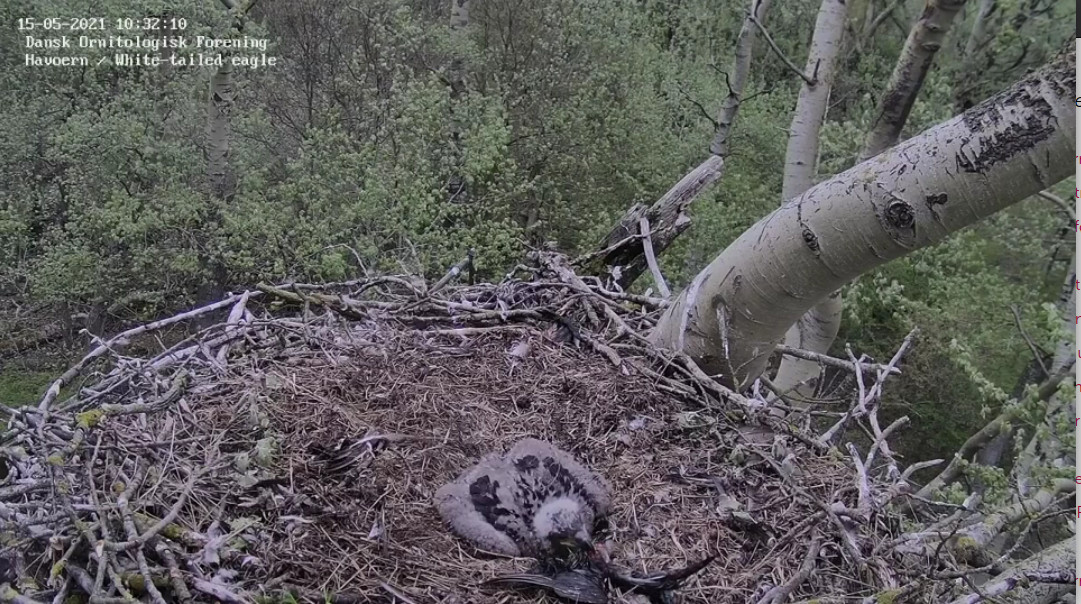 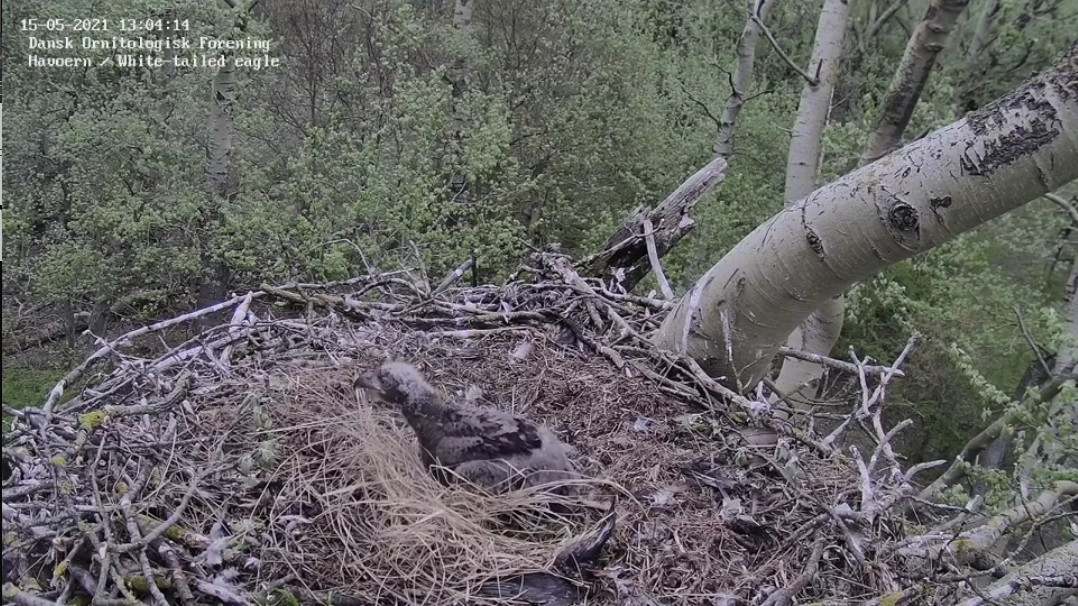 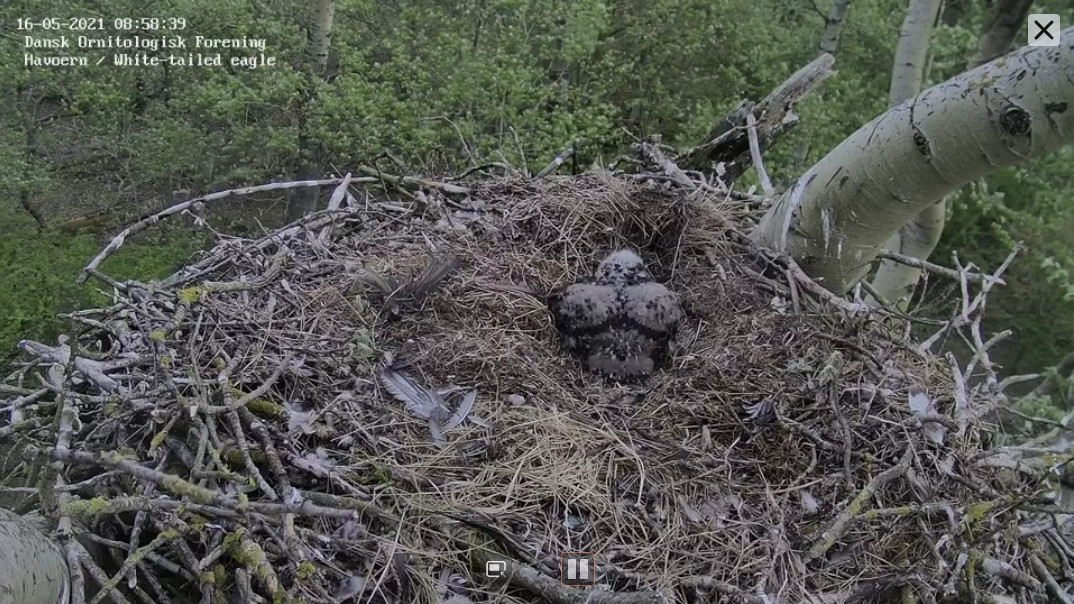 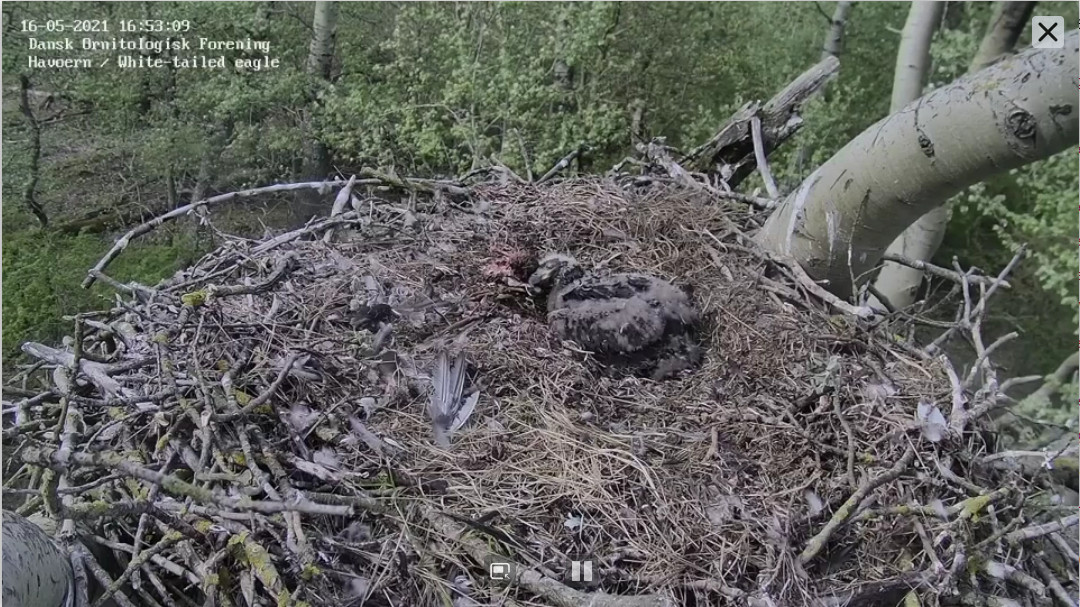 I enjoy reading Ole Friis Larsen's frequent comments where he gives so much information about the nest life. He explained for example that in this age of the eaglet the food portions are big and it is enough to get delivery once or twice per day. I learn even Danish (- to translate to Swedish without GT! -) when following the comments on the cam page

First night for the young without cover by an adult - the female.
And quite alone all night.
Way to go. 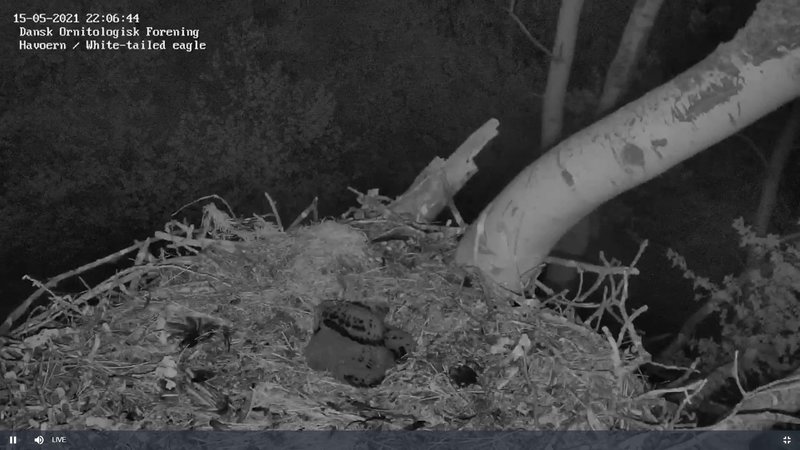 The deliveries of food to the young are completely different from those of small birds, which constantly have to bring food for a litter of young.

On the eagle 's nest there is only a single young, and the food that the parent birds bring is both larger and heavier. Therefore, food a single time or two in a day is often sufficient. If the young are hungry - for example through a few days of rain and debris - they get so-called hunger streaks in the plumage. When the kids were down to be ringed last year, they had none of those kinds of hunger streaks.

The two adult / adult eagles on the TV nest are really good at providing food, and this year they now only have a single young to support. It is not neglected on the food front.

It is true that it could be interesting to see how the eagle cub does if it ends up being blind in one eye when flying from the nest, but in a larger context it is still most important to put GPS transmitters on healthy young eagles. GPS projects are expensive and we still lack knowledge of how the majority of eagles live.

Therefore, it makes the most sense to put the few GPS transmitters we have at our disposal on eaglets that represent the majority of the young.
Top

I am wondering - is the parent offering food consciously from the right side of the eaglet? 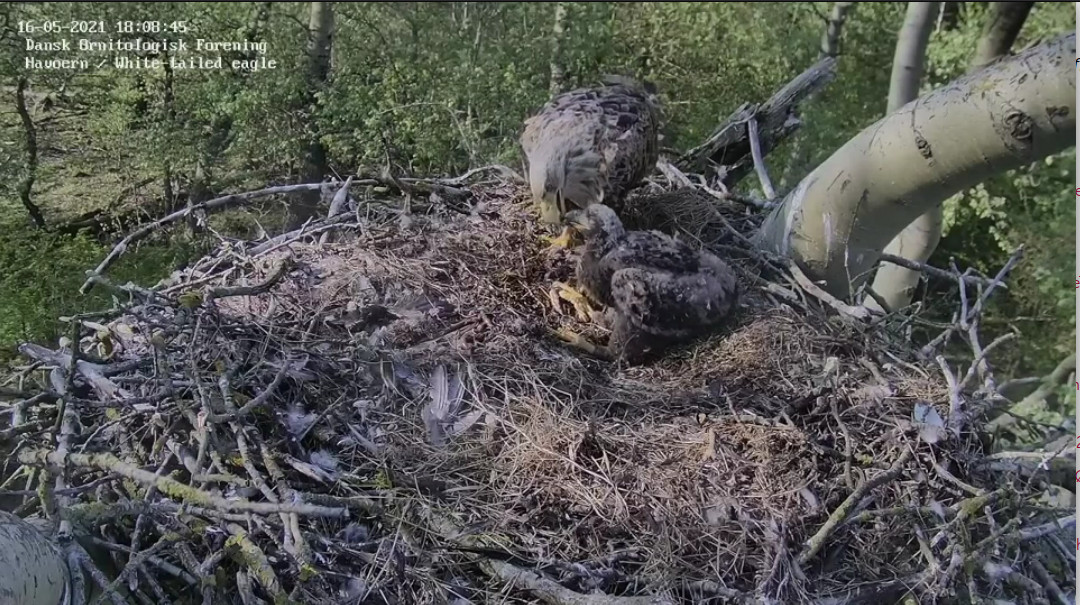 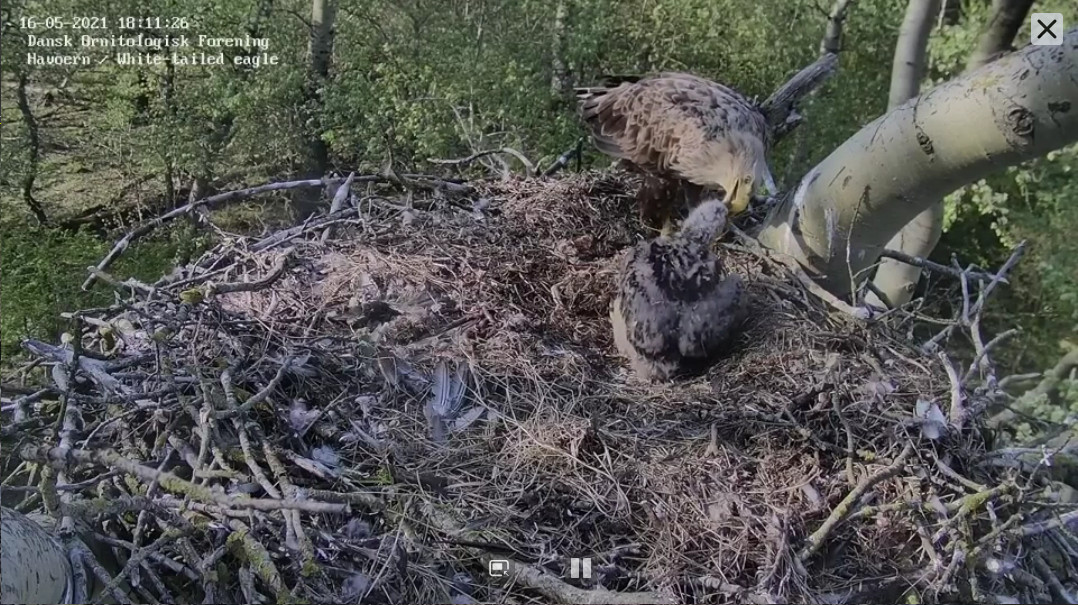 The male on the usual perch after having fed the eaglet 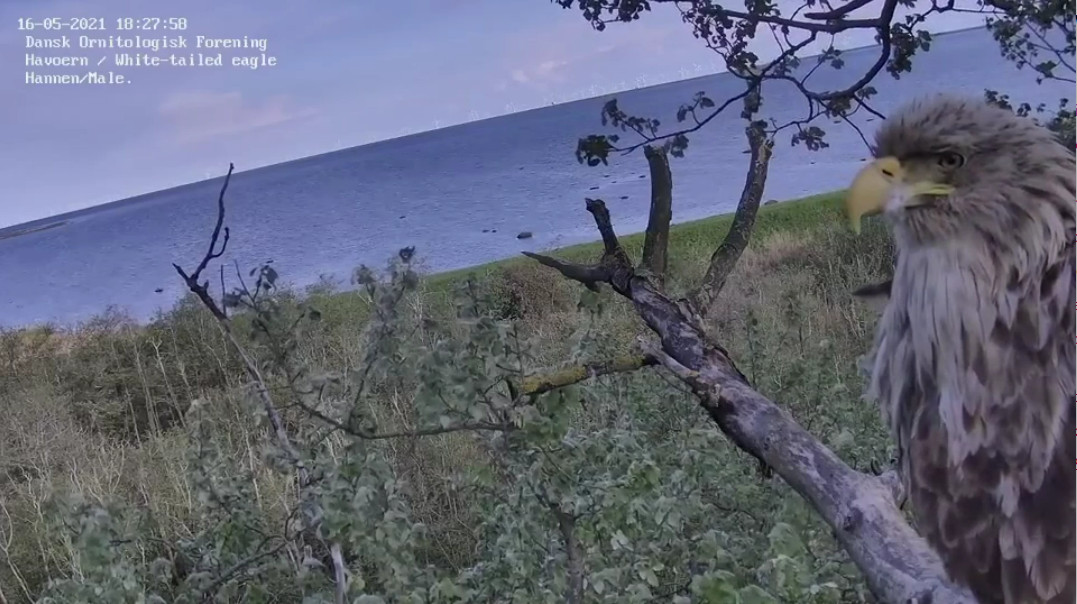 I wonder, how does this hunger streak look like..

They are a sort of lighter stripes on the feathers, visible, but not easily seen. I cannot find a picture just now, maybe later.
EDIT: best I found now: https://www.researchgate.net/figure/Two ... _308204112

Last year OFL tells that both eaglets had no such stripes, so these parents are good food providers and we can assume that the eaglet this year will neither get them

As I saw the latest feeding I want to believe the parent knows to feed the chick so that it focuses on the right eye. Maybe I am wishful thinking ... 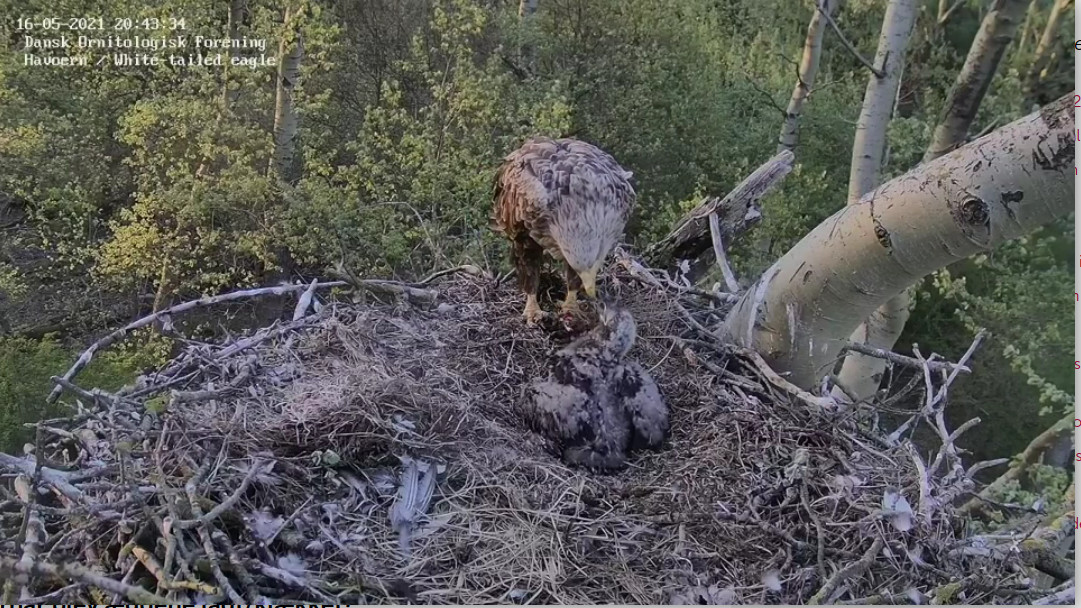 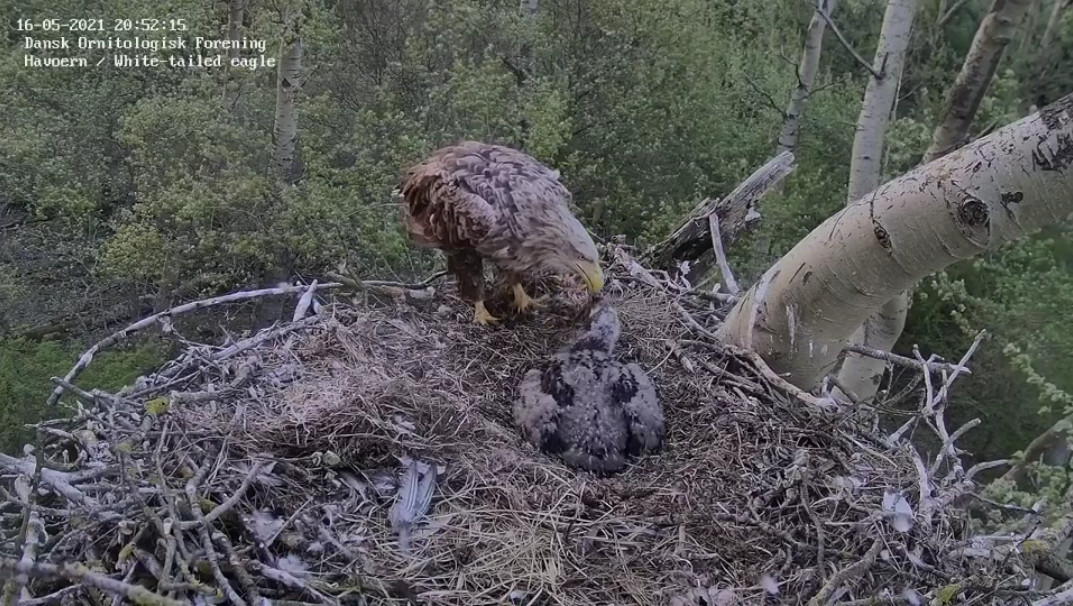 They are a sort of lighter stripes on the feathers, visible, but not easily seen. I cannot find a picture just now, maybe later.
EDIT: best I found now: https://www.researchgate.net/figure/Two ... _308204112

Last year OFL tells that both eaglets had no such stripes, so these parents are good food providers and we can assume that the eaglet this year will neither get them

Owlie thanks for the info!

Female was at the nest this night.
DOF made a video of the chick trying to swallow a much to big wing of a bird. On the 14. of May.
In fact it looks like the female at last removed the wing! 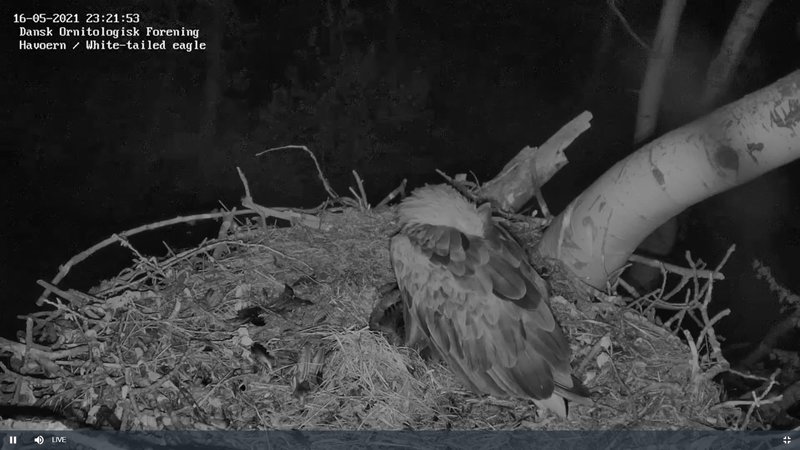 Does the left eye look even better now?

The eaglet's plumage changes every day! 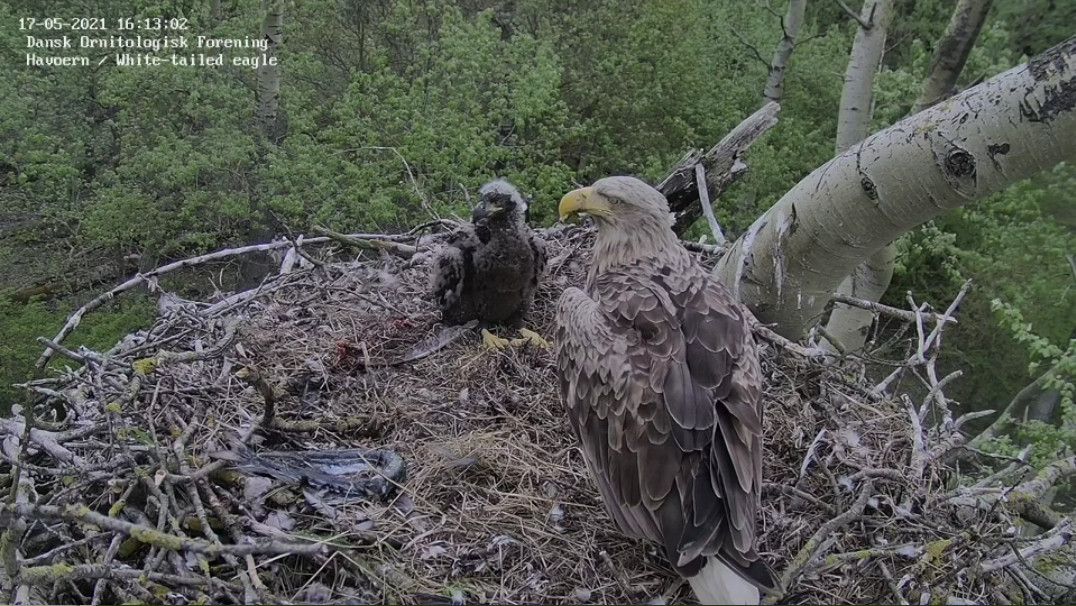 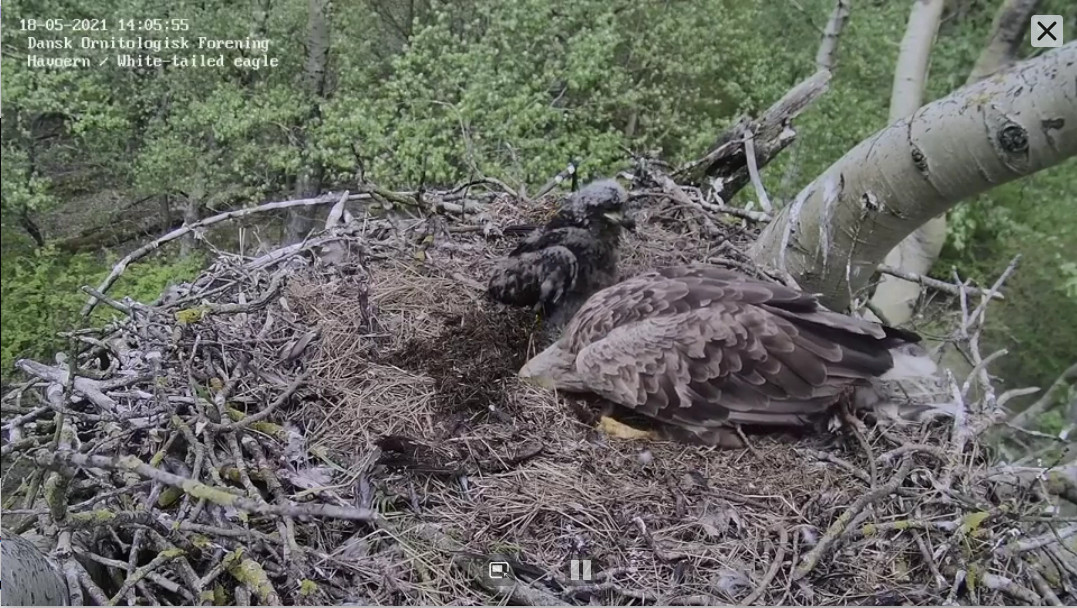 WTEs especially females dig often in the nest bowl - all year round.
Maybe to keep the bowl dry. (Some of us do the same with our quilts in the morning!)
I also sometimes think of the nest digging as a ritual!

05.42 The female arrives and the chick raised completely all the way up (for the first time ?) to s-h-i-t and drop a pellet.
The female put the pellet from the bowl to the edge at once.
The left eye looked a little bit better this morning, I think. Maybe there is hope.
The bubble on the pupil has disappeared - it looks like. 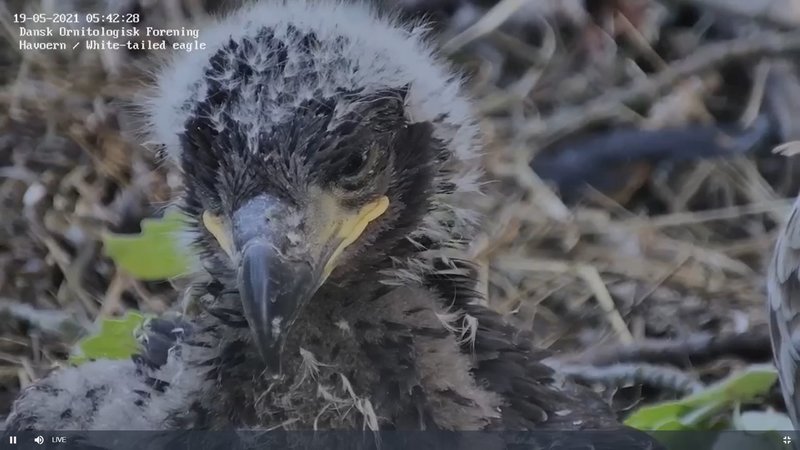 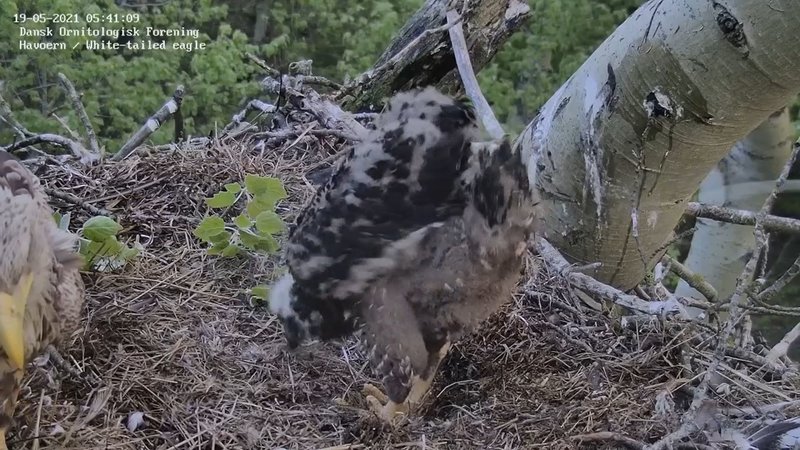 Thank you albicilla for the delighting picture of the eye!

The eaglet has its Cherokee phase in its plumage development 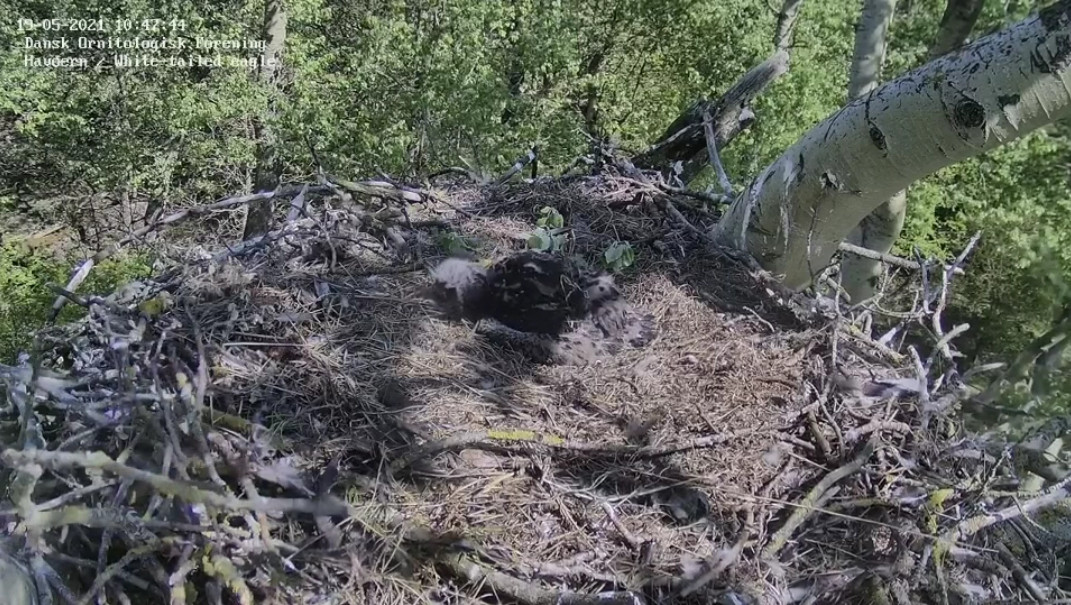 Again, very wise thoughts by Ole Friis Larsen on the cam page [Google translation] - referring to the episode with SWFL Eagle cam eaglets this year and actual ideas regarding many cam nests this season:

Thanks for 'a good story'
Written by Ole Friis Larsen on 19 May 2021 at 08.27
Thanks for the link to the American story about the two eaglets with infections in their eyes. No one can know if the eaglets would have recovered from the infection by themselves if no one had intervened. It also appears from the report that there was doubt as to whether it would go well to remove the pups for treatment for several days. There was a risk that the parent birds would not recognize the young again.

Still, it went well, and that's fine, but there are probably also cases where it has not gone well and we (therefore) have not heard of them.

If it now turns out that the cub in 'our' nest ends up healing its left eye, we get in return an example that nature itself can cope with many problems that we may not think it can.

In any case, such reports are good for discussions about where we should draw the ethical boundaries - and that there is probably no exact boundary. Our position in Project Eagle is still that we should intervene as little as possible. This does not mean that we will never give nature a helping hand, and we have done so in some cases when nests have crashed and it has been easy to try (successfully) to place the young on top of a bigball, for example. .

the eye looks really good ... i hope the healing continues ... i'm happy for the little one

It looks that there is at least nothing extra sticking or running out from the eye, discharge or so 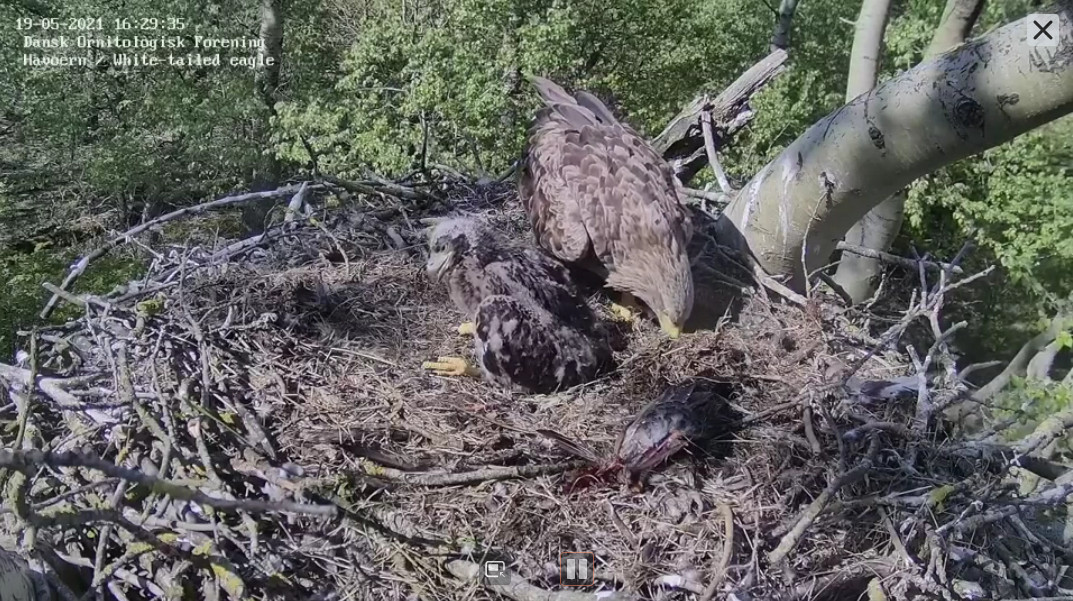 Just now the sun is shining towards it. The crop is full 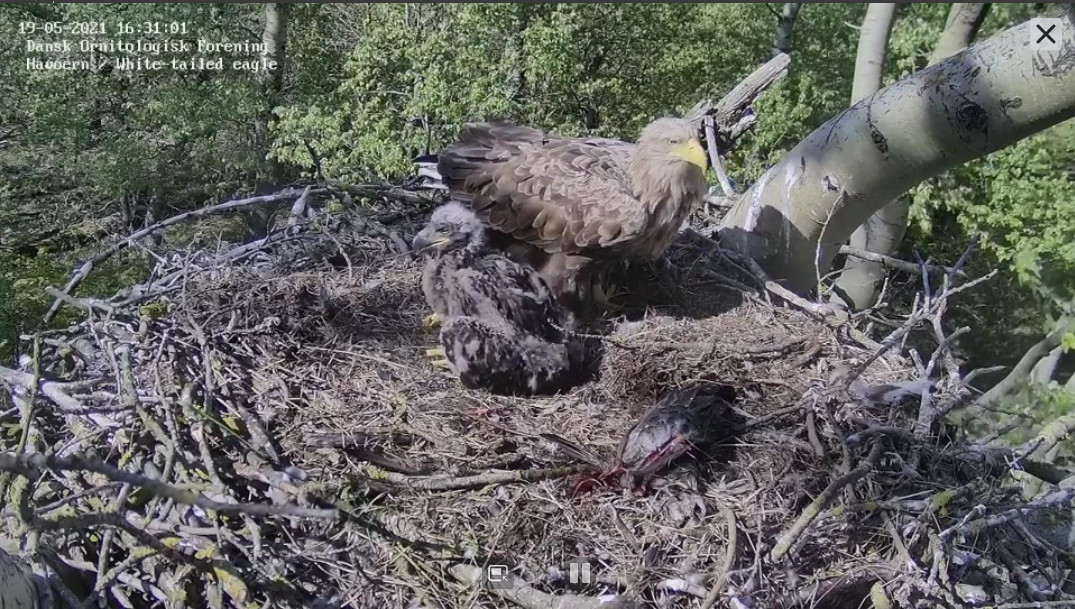 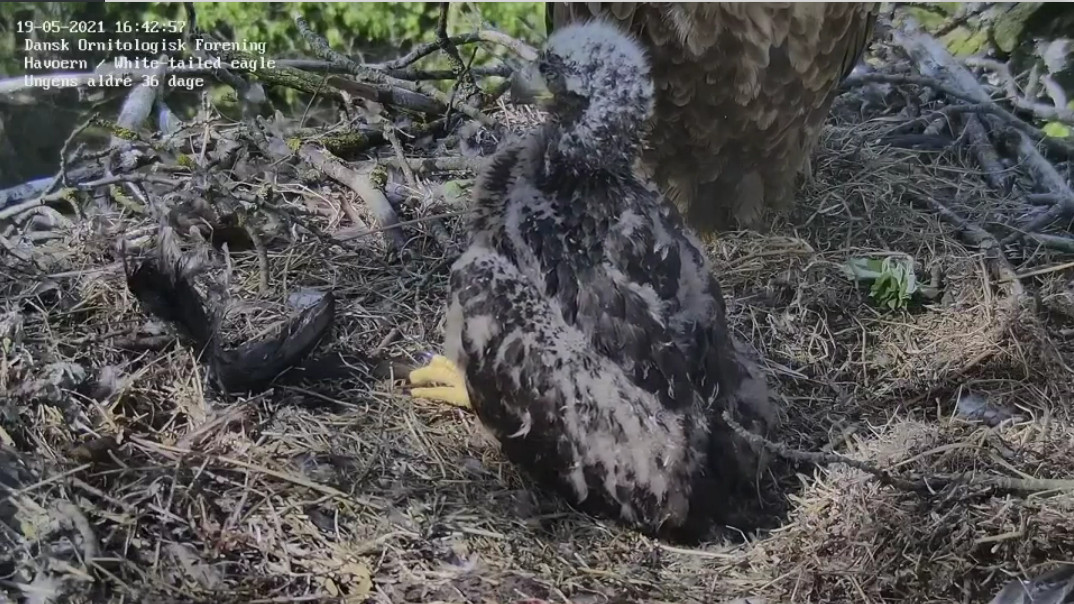 Wind mills on the opposite shore ... 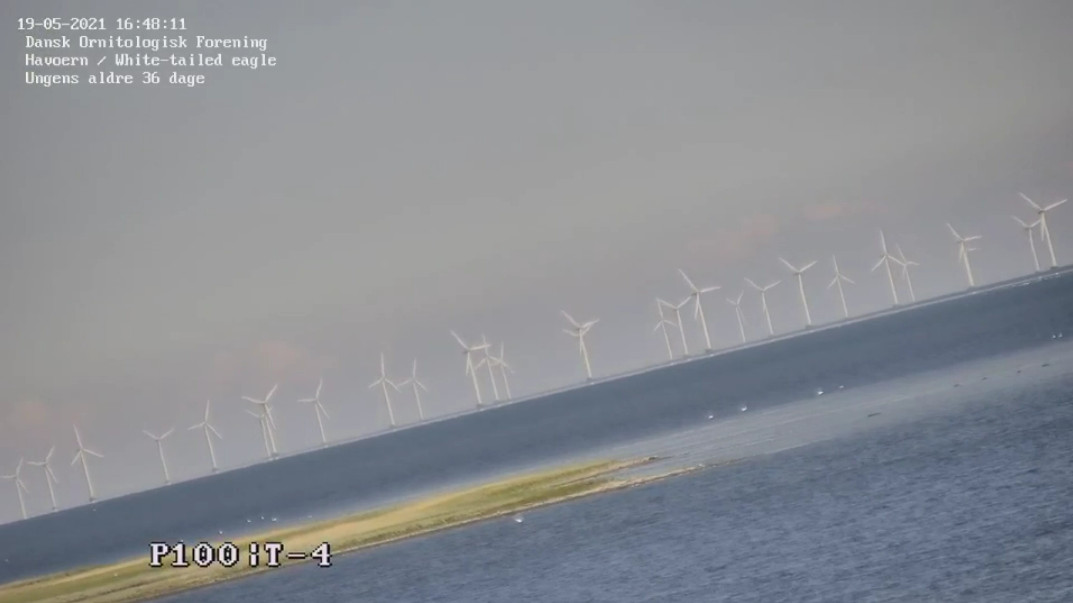 Saxfjed Nature Reserve with the WTEs nest and the windfarms Rødsand I and Rødsand II - 162 wind mills in total. 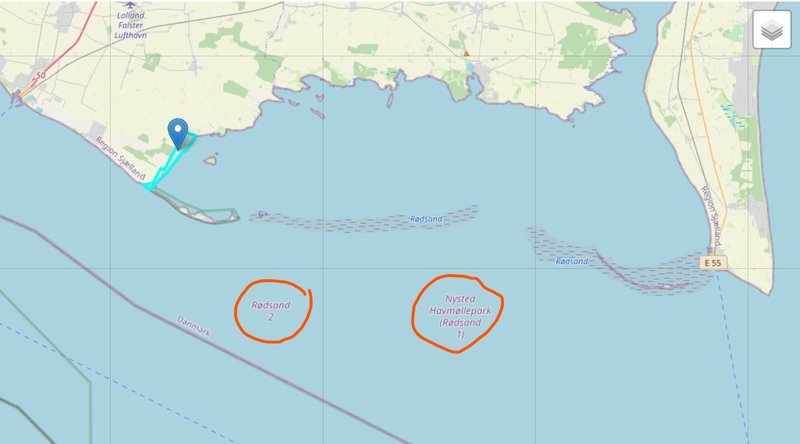