by Bleggi
I am looking at this birds every day - but I think they will not be there for a long time
11:54 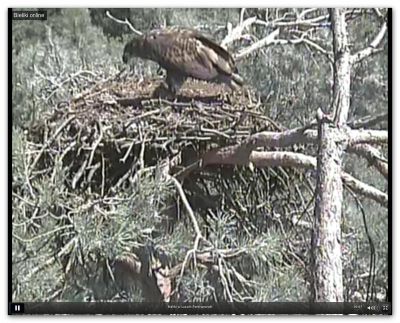 I meet this single bird always when he/she is eating

I have stolen (or is it allowed?) the advice for this cam. Its my headline for this birds on my album.

by borje
Hello,
You are quite right. Both youngsters are now supported in their feeding by the parents outside the nest.
Now and then they might visit the nest hoping for fish brought there by the mother or father.
We are lucky to see two healthy WTE´s. Tough times will be the late fall and winter, when the parents are leaving them and the older have to support themselves. and do not care for their kids.

I hope for a future for these two nice eagles.

by Fleur
Thank you for the info Borje
it was nice to watch this webcam and the beautiful Eagles.
I hope next year with sound

by Felis silvestris
Dear forum friends! So many new members have come here, so we (the admins) would like to remind everyone, new and old, about a few guidelines about posting pictures here. Please limit the amount of pictures in one post to 5, members with slower computers will thank you for this. Remember also, pictures should not exceed the size 800 x 600 in order to make sure the picture fits on smaller monitors without scrolling!

by Flex
Thank you felis, the loadtime of my very old Computer is very faster with the smaller pictures.

by Fleur
Inevitably come to the point where the view of the empty slot will be more common than the sight of our favorites. In your posts, clearly resonates remix grief because of this, so to comfort a short entry on this topic :) But we are preparing for a new winter project ground :) We hope that this makes it easier for the abolition of the waiting time for the next clutch :)

thank you that we could watch, for the information and for the nice moments, movies and pictures.
next year with sound I hope

by Brzoskwiniowa
A video of our rogues :)

Excellent recap of the season..

by NancyM
That was an excellent video!! The Polish WTE parents raised two mighty eagles

On a different note, if anyone would like to introduce themselves to the forum and say where they live, we have a new topic in the Social Corner just for that: viewtopic.php?f=8&t=495

by Fleur
really a beautiful, beautiful movie, I enjoyed the months that they were on the nest.

by Brzoskwiniowa
Hello!
The next movie about them

by Starling
Thanks for the videos.

thank you for sharing

That was just perfect! The music was very well chosen.

So that is where they learn their kick-boxing skills - in the nest!