Finally I was able to see male's tail more closely and it seems to me, that it is a male from previous years. 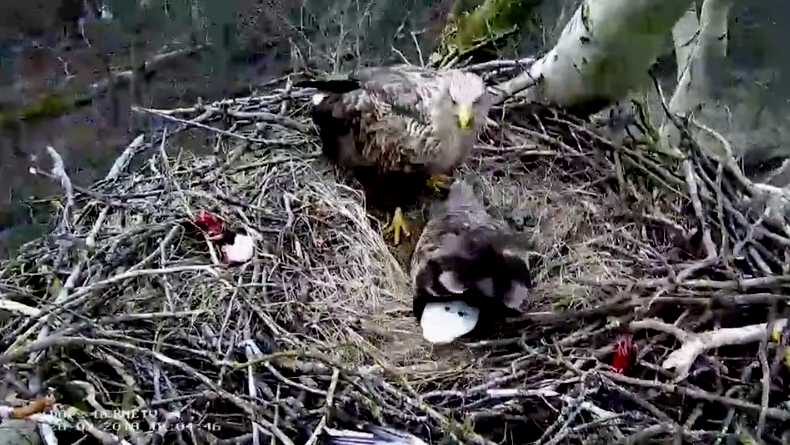 Finally I was able to see male's tail more closely and it seems to me, that it is a male from previous years.
...

Thank you Mamicja, it is nice to know that he is still there! But where are the eggs?

Written by AM Børgesen on 28 March 2018 at. 6.9
Lars Mogensen. I think it's the old man. The dots on the back can be changed by folding (?). At the old he noticed that its expression, around her eyes, was milder than the old one. It still has a sharp eagle, but a milder expression than the female. Perhaps it's typical of the males ??

Btw, recently a weak WTE was brought to a birds rehab center in Southwest Finland (near Baltic Sea cost) and they detected that it had bird influenza - and also all other birds at the center had to be killed

Hopefully these Danish birds don't catch it! (We don't know what happened to the old mother WTE of this nest ...)
Top

Eagles visit the nest every day, but there is no indication, that eggs will be laid soon. It's getting a bit late, in 2015 the second clutch started on April 17th and there was not much food for eaglets. 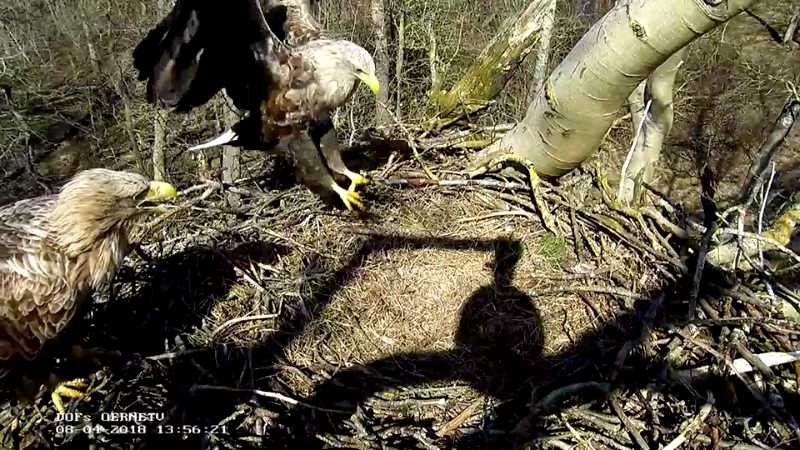 I am quite convinced that there will not be any offspring this year in this nest. It really is far too late for it.

We don't know whether this female is too young or otherwise unable to lay eggs - she hasn't seemed especially interested ... As you mentioned before, the male looks much more interested in building the nest.

A shame. But the life is not always optimal, even if we spectators would wish it.

Btw - I have no idea but came to think: might it be possible that a male is no more fertile, if he is too old? Must search for information ...
Top

April 11th
Today in the evening the new couple was attacked by an stranger eagle. They defended the nest separately or together.
Stranger striked the eagle in the nest at 20:02 and 20:22.
At 20:36 intuder flew to the nest but soon left. Later male flew to the nest and departed at 20:45.
Pictures later.
EDIT

Sea eagles
3 hours
·Huge drama by nest. Several of you have reacted and described that there was a direct match between two females and other clashes in the nest Wednesday night. We have footage of it and will probably return with a video. Here is a picture for now. There are several options, for example, two new eagles to be struck with the new old couple on reason and territory. So it's super exciting what it ends with.

April 13
I haven't noticed the intruder today, but there was a wonderful close-up of female.

April 13
I haven't noticed the intruder today, but there was a wonderful close-up of female.
...

We were there at the same time, zoom was great.
It is interesting to follow this nest, there happen things all the time, but no eggs ...

sounds similar as the events at the Latvian nest 1 in 2015 and 2016. let's hope that the dominance of the territory will be decided this summer and that the new couple will confirm its presence without further complications. then there are good prospects for eggs in next spring.

wasn't the female of the previous couple a leg-invalid?
Top

Yes she was and we don't what happened to her, the female this year is someone else. But it is sad that there will probably be no offspring this year. Who knows - what happened before the cam was opened ...
Top

eagles
5 hours ·
Here are recordings of the red drama of April 11 clipped chronologically. There is probably a battle about the nest and the territory of four birds. The biggest fight is finally in the video. Unfortunately, we must conclude that there is no egg in the nest this year. It will be exciting to see what's going on in the fall when I hope to recapture eagles again.

Thank you Owlie for the link. It were harsh fights.
Top

Nice news from Facebook, Google translation: https://www.facebook.com/havoernene/pho ... 99/?type=3 Maybe there has been struggle for a longer time between two couples and therefore no eggs have been laid

I am watching this couple, female behaves completely different than previous one. I haven't seen her limping or her injured leg, but the tail's pattern shows, that it is last year's female.
Maybe you are right and before camera was launched there was also rivalry for the nest? I wonder how things will go. I would prefer, that eagles couple skip this season due to food scarcity at the end of spring (fish and young ducks).
Yesterday 17:04 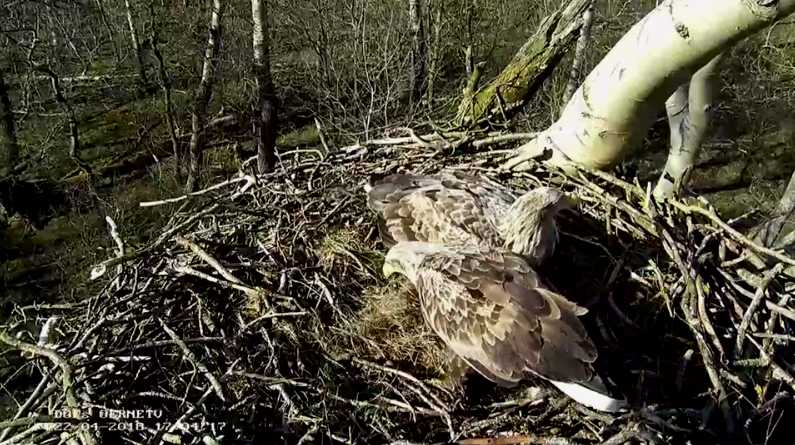 
Today female stayed in the nest for the night 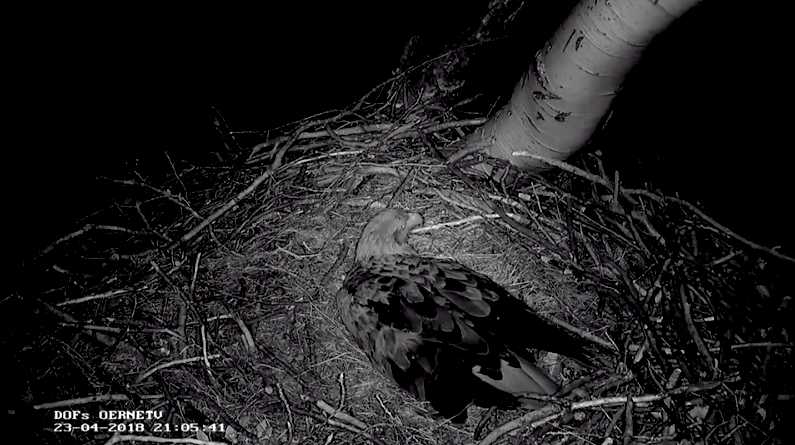 I, too, would prefer that no offspring would come this season, the "marten year" eaglets had hard times with food so late.
But it is delightful to see, that the old mum is still alive and healthy. 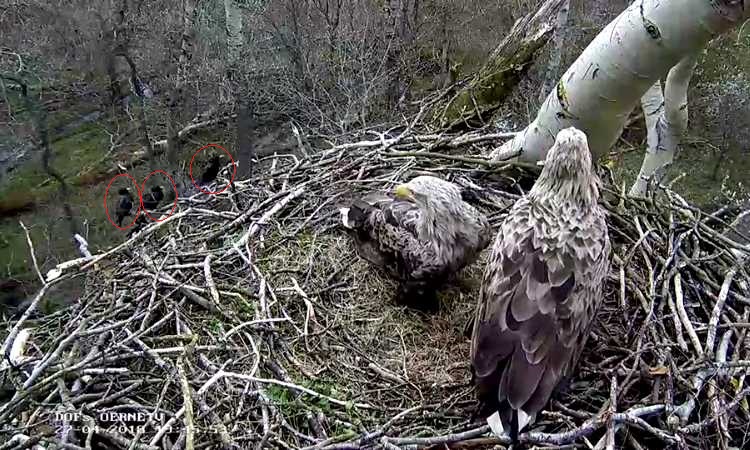 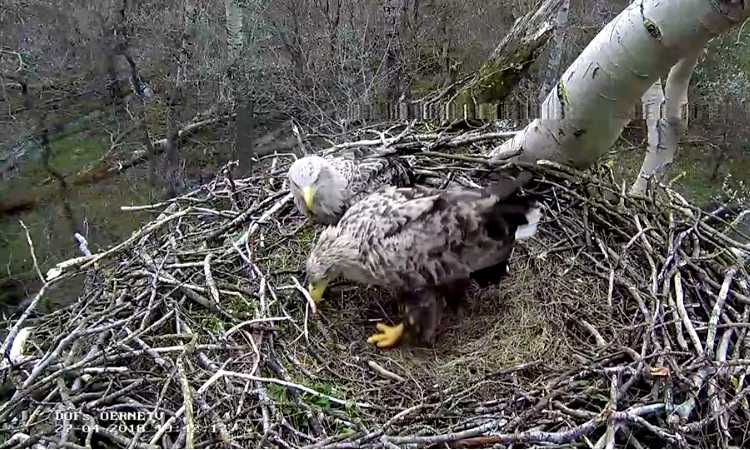 May 6th
Eagles still visit the nest.
Today in the evening both flew in. Male left the nest 19:46, Female was resting till 21:23 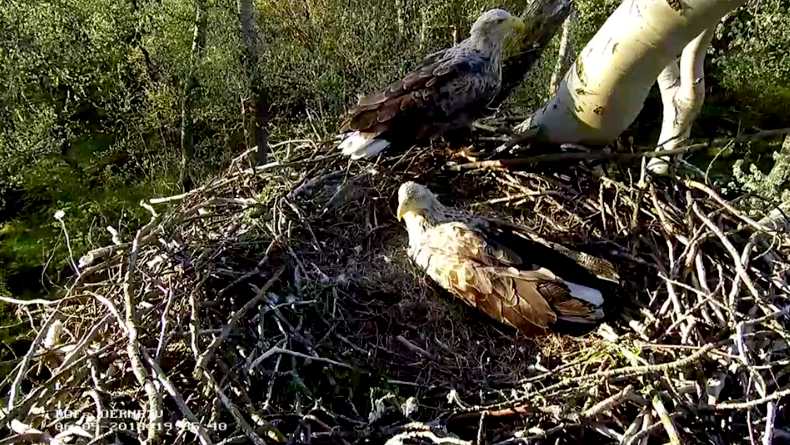 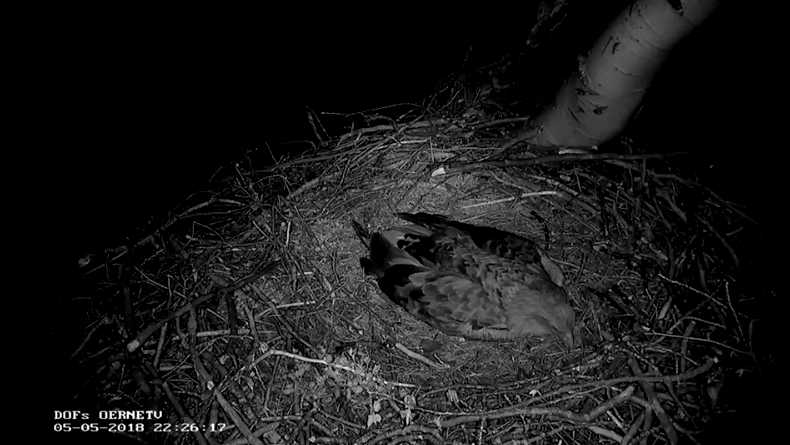 May 11
Although eagles visit the nest every day, their behaviour doesn't indicate they will breed this year. Eagles stopped bringing sticks and moss, female usualy lies guietly in the nest and male watches the area.
Female and pigeon 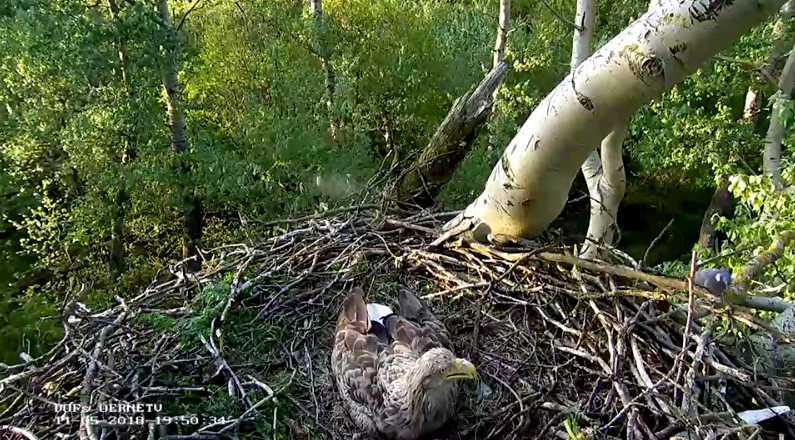 Lately eagles don't visit the nest and I think, the camera will be soon switched off.

Last time I saw female on May 13. She was resting in the nest for almost two hours. 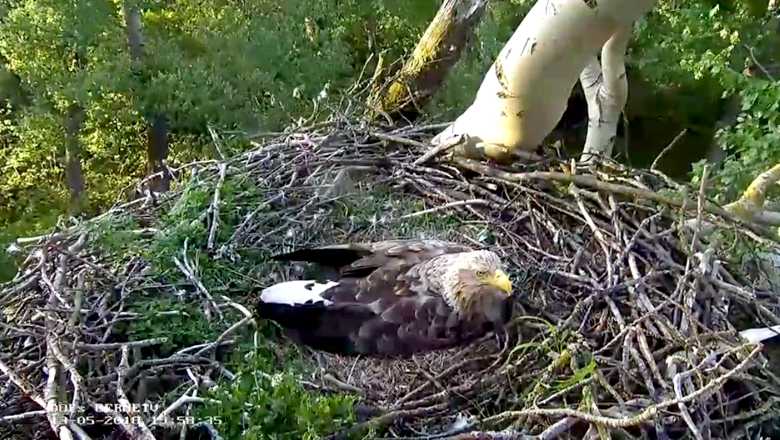 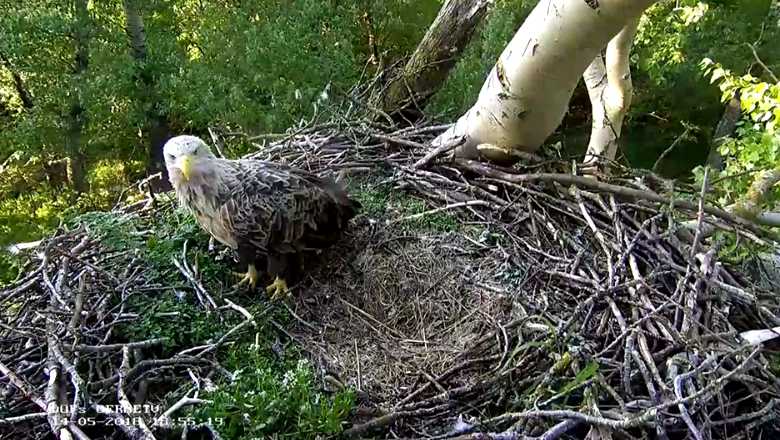 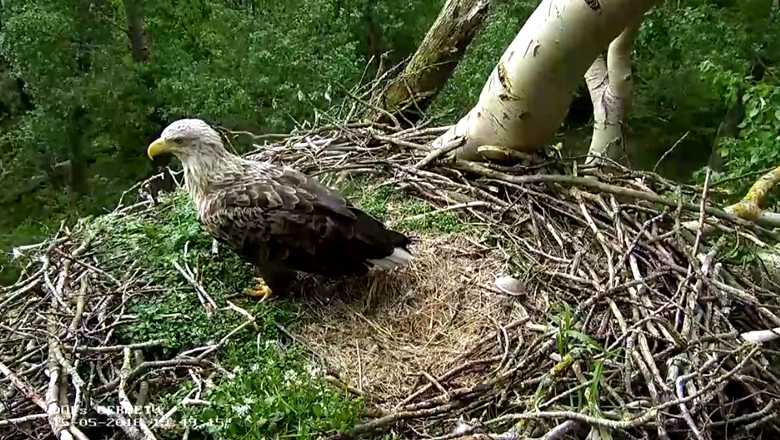