Have you told them, Asteria? They ask for being told of any problems

When you look at the bottom of this article: http://www.looduskalender.ee/en/node/10777

there is a link to report problems!
“One can measure the greatness and the moral progress of a nation by looking at how it treats its animals” (Mahatma Gandhi)
"You can judge a man's true character by the way he treats his fellow animals" (Paul McCartney)

the opening of the webcams has been re-renewed today. here's how it goes now.

then you can select which device works for you: the one with the http- (green arrow) or the mms-address (red arrow): 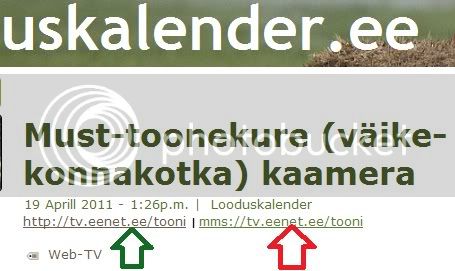 thank you Kaido for re-organizing this!

beans wrote:I appreciate the Pontu pictures posted in the forums here, but I don't know how to access them.

Would someone please write a tutorial on downloading this pictures? Because someone may ask this question later, does it make sense to have a dedicated thread in Tech Help for this tutorial? Then members can be given the link when they have questions.

another thing that has to be remembered is that old Pontu pictures are not available any more (last year's pictures or older) so if someone wishes to have them one should download them 'fresh', meaning during the on-going season. even this year's WTE pictures from May onwards aren't available anymore...

FelisSilvestris is in the process of uploading the LSE-pictures from this season up to both P-bucket and Mejuba i think, so also they will be available for inspection after the season closes.

neither of these photohosting sites is really very practical if someone wishes to get a look at every picture fairly quickly. i suppose there aren't many of us who wishes to do that...

.... but if someone wishes to do it in that case it's most practical to download the pictures in a bulk to one's own computer (or an outer hard-drive or any mass-storage device; about 800 pictures per day of about 550 kbytes each times about 200 days per season does take some memory...

beans had found my instructions how this can be done and posted a reminder of that above. thank you!

thank you very much for the work you did.

could it be that we have a complete different site in germany???
Top

Hello, emz.
There is a German language page -
http://www.looduskalender.ee/de/

emz wrote:thank you very much for the work you did.

could it be that we have a complete different site in germany???

It is a bit different, but now there is the link to the LSE cam, though it reaches the Estonian site, and on the webplayer picture there is a Black Stork - don't get worried, if you click, you reach the direct stream and the LSE camera, the stork had come right in the beginning, to look if a mate comes to nest there.
If English is too complicated, maybe you want to PM me and I can explain it in German to you?
“One can measure the greatness and the moral progress of a nation by looking at how it treats its animals” (Mahatma Gandhi)
"You can judge a man's true character by the way he treats his fellow animals" (Paul McCartney)

Functions within the Forum

As I don't use any other forums at all, here are 2 essential questions:

What is the difference between using the PM button and the Email button?
(My impression: PM only reaches members who are continually active in the forum. Otherwise the member whom I send a message via "e-mail" button, has to get it onto its e-mail account directly. But what about "board preferences/edit global settings"?)

How is it possible to handle with defaults for the view of forum's board index - so I only get to see the latest/ the currently active topics?

I'm afraid for a non-English native speaking it is complicate to understand the meaning of technical terms...

Although, I'm optimistic what comes!
Top

The Private Message button lets you write a personal message to another member. Members need to have set their permission, in User Control Panel - Board Prefences -
and there you enable Yes or No about allowing members to send e-mail and personal messages to you. Also whether you want a pop-up notice when there is a new PM. or if you prefer to be notified by e-mail.

The E-mail button means that the forum sends an e-mail to the address you gave when you registered. Your e-mail address is not visible to the member who writes to you.

I hope this helps, but please ask more if you want!
Top

And I thought I'd be the only one who is complicated...

But again, what about

How is it possible to handle with defaults for the view of forum's board index - so I only get to see the latest/ the currently active topics?

On the optional "Board preferences" there is "Edit display options" which seem to have to do with my wish for an own Index arrangement...
Anyway no further problems!
Top

i think i found a program which is worth trying for recording videos and taking snapshots from streaming video from the web like the Nova-webcamera of eagles' winter feeding place. it's NCH's Debut Professional and can be downloaded from here. it's the fourth icon on the right: Record streaming video. it was easy and quick to download and it started right away.
http://www.nchsoftware.com/capture/inde ... mAodg2Qmlw

after a little fiddling i managed to get this view. i had opened a new window for the feeding place by dragging the tab of Nova to the side (like Kitty adviced). i had also rezided its window so that it fits there and rezides the picture with ctrl-minus so that the picture fits the window.

on the top menu the recording was set to "Screen" (third button).

from the bottom line on the far right there's a rectangle (grey arrow) where you can select the area of the screen which you want to record.

next to that selection on its left side there's an icon with a picture of a camera for taking snapshots (purple square). on the left are button for recording: start (red arrow), pause (purple arrow) and stop (green arrow). the program minimizes the Debut window when it begins to record but it can be re-opened from the row in the bottom of the screen (is it called the taskbar?) for taking snapshots during recording.

the recorded video is taken from the area of the screen which you have selected so if you move the windows on the screen during recording it may mess with your recording.
Top

in the Tools- menu you can select the files where you want to save the videos and pictures you have taken.

the Output-tab opens the options for videos: the destination folder. there you can also set file name format as you like. the default name is "Untitled" + running number but you can change it to your liking. it shows you an example of names (orange rectangle).

the same option for snapshots can be found under the Snapshots-tab: destination folder and anming of the picture files.

on the bottom of this tab there are also check-boxes where you can choose whether or not a flash blinks and a shutter voice sounds when you take a snapshot. i unabled the flash before even trying it.

the shutter sound is not too irritating to me so that is still on.
Top

I try to get out

I just searched, but I can not find it.

I guess I can not help

hopefully someone else?
Top

Fleur wrote:I try to get out

I just searched, but I can not find it.

I guess I can not help

could you not find the NCH-site in the web? 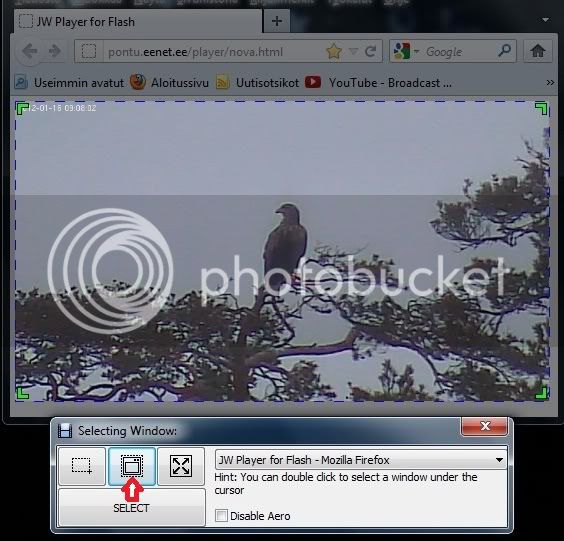 then i found out how to change the naming of the out-put files so that they will include the timestamp of recording automatically. the default name was
"Untitled %autonumber%" which is not very practical for saving a lot of pictures and videos i think.

i found out that Debut supports following automatic numberings:
%YEAR% =year
%MM% = month
%DD% = day
%HH% = hour
%MIN% = minute
%SS% = second
these are case-sensitive so you'll have to write exactly YEAR to get 2012 in response. in addition to these automatically appearing numbers you can add something in the fron (or in the end i think). i inserted "Nova2012" in the front and also %autonumber% in the end, just to be on the safe side. (i noticed that i took too many pictures in a row and only the last one was recorded.)
here's the whole line i used for naming the file:
Nova2012-%MM%-%DD%-%HH%-%MIN%-%SS%-%autonumber%
when i clicked Stop to stop recording this is what i saw:

i found a switch in DebutProfessional where i can turn off the BEEP! and beep at start and stop recording. they were annoying sounds which were recorded on the videos. they were in Options-Record-page in the bottom. clear the check-boxes and the sounds are gone.

you should also clear the check-box on the bottom of Options-Snapshot-page in order to get rid of the camera shutter sound. otherwise that is recorded on video, too. the flash produces a silly-looking effect so i removed that, too.

Has someone written instructions for how to use VLC? I have it now and I am having troubles. I did get it to play Siga, but that is as far as I got.


I found something -- in the VLAn info -- it was wrong, but it set me on the right track, so if I can find them I have some captures from Siga. So far VLC refuses to accept the address for nova.
Top

Nova needs a bit patience, it won't start on the spot!
How did you put in the address? I found the best way is to copy the URL (like from page 61 bottom

) and after opening VLC you use the "use URL from clipboard" or whatever it is called in the English version, mine is, what else, all in German (and I can't change it, tried that earlier for explaining).
“One can measure the greatness and the moral progress of a nation by looking at how it treats its animals” (Mahatma Gandhi)
"You can judge a man's true character by the way he treats his fellow animals" (Paul McCartney)

I was not sure where I had been posting the address -- not exactly -- as you described, but this evening I went looking for a spot that says something about address from clipboard, and it looked a little different but the results were the same

I spent some time looking for the log file -- still no idea where that is.

So maybe sometimes impatience is a virtue