Alice, let´s see whether one of these settings could help, sorry - they are only in German, but perhaps it can help you find the way.
When you hear sound, but have no pictures, it could be that the stream is coming in, but is not decoded in the right way. 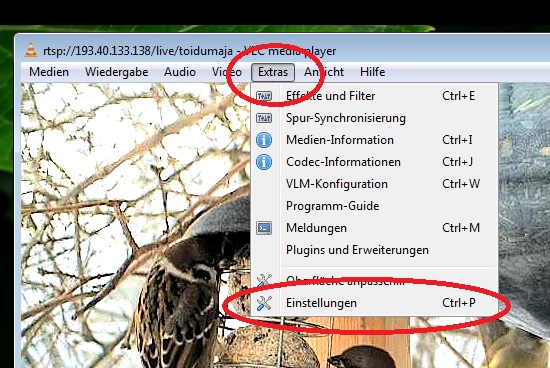 Then look at these settings first - I marked all with red circles: 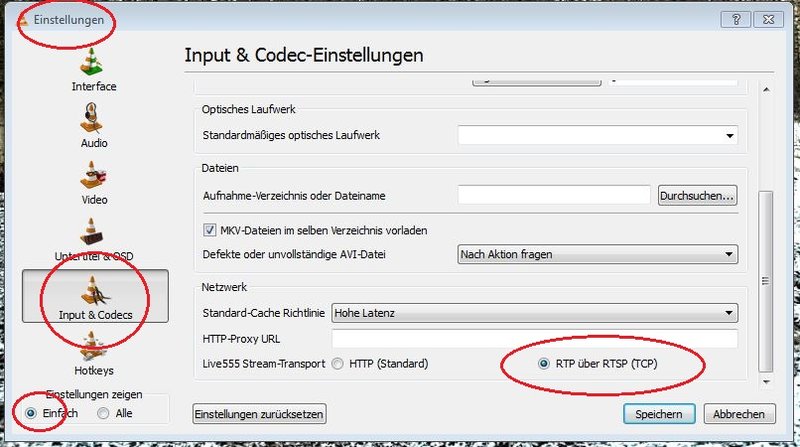 At least click on "Save" - close VLC and open it again and try whether it works with this. 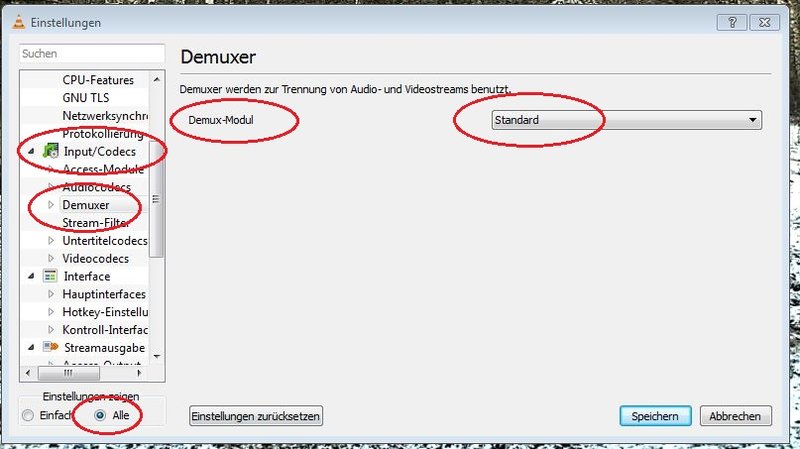 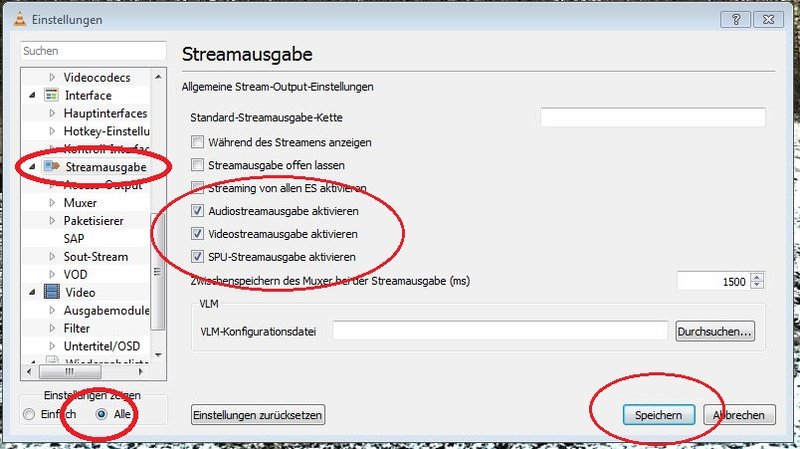 Don´t forget to click on "save" when you made changes - then close VLC and start it new.

I am not sure I followed all of that BUT I did see that mine was set for HTTP not rtsp. I changed that and it worked! (which is odd as one of their model samples was an rtsp so)

Now I can make pictures like a speed demon.
Top

I am glad I could help

I will check the other settings after I have slept.

But it is a marvelous improvement already.
Top

Goodmorning, ladies...
I am very grateful for having such semi-competent forumists in here. For any kind of problem you find someone!
Top

Alice, is your VLC problem solved?

i upgraded today to 2.1.2-version but now i'm reversing down to older version since the 2.1.2-version kept crashing over and over again. i was using it to watch older videos, not stream this time. - i think i read in the Videolan forum some time ago that there are problems with the VLC 2.1.something versions.

Yes Ame it is working -- and Rincewind it is I think. I have gotten odd messages about failure while it seems to be playing along. As if I get a message when there is a tiny tiny break in transmission.

I want to poke around a bit more in the things Bea pointed out --- just to see. But mostly I am so happy I can just click and get a capture.
Top

Hi,
is the forum clock at the right time?
Top

You have to chose the time, that you want to see the forum time, in your own personal settings in the user control panel.
Nature does nothing in vain (Aristoteles)
Top

This post is about Java settings blocking some web applications and a trick to get around that.

i don't know how many of our members are using Mejuba as photohost and how many of those upload BIG amounts of pictures there (besides me i know one). but in case someone else is facing the same problem as i i'll make a note here to explain how i got around it.

after the update of Java a week ago (on Jan 14th it seems) the Advanced Uploader stopped working in Mejuba. it just gave an error. the Mejuba team gave me an enigmatic advice which didn't help me (as they unfortunately rather often do; on the other hand one sometimes does get a reply from them which is positive).

after trying this and that i found out that i need to lower the security level of my Java. in the latest update the level is set to HIGH as default. this setting may block other applications, too, and not just in uploading pictures in bulk to Mejuba. as a result you may see a warning like this
"Application blocked by security settings"

what needs to be done is to lower the security setting from HIGH to MEDIUM. with this setting Java will display a warning of a questionable application and you can then give permission to run it or deny it. if the setting is HIGH then only applications with security-certified applications will run. the setting VERY HIGH was called a "paranoid-setting" in the forum where i found this information. probably it will block almost anything.

then select Java Settings and in the Java Control Panel -window click on the Security-tab on the upper row.
then slide the security level selector from High to Medium (from blue to red arrow). finally click "ok" and you're done. restarting anything is not necessary.

now i can upload Pontu pictures to Mejuba in bulk. the Advanced uploader first ask me permission to RUN the application and then i need to say ok once more.
Top

Could somebody advise me how to move my post to another forum?
Top

You can´t move one of your posts, but you can make a new post with the same content in the place where you want it to be - and delete your old post in the "wrong" position.

In your posts are some buttons on the lower right corner - you have the X-button to delete.

Delete the old post will only work as long as no one posted after you.

When one has already posted after you - just contact one of the admins or mods, we will delete the post you want to vanish :) or we can move it for you.
Nature does nothing in vain (Aristoteles)
Top

Thank you Bea, I managed to do it.
Top

Here the first character h has been replaced with a * so that the whole address is shown. The word saunja or kurg defines the camera:
- saunja means white-tailed sea eagles camera near Saunja village
- kurg means the camera at the nest of black storks Tiina and Tiit

The following part defines the date and time in question in format
/yyyy-mm-dd/yyyy-mm-dd-hh-mm
and the end defines picture format .jpg. The basic format of addresses of Pontu pictures are given in the opening post of each nest camera season topic.

In order to see one definate picture copy the address and paste it on the browser's address field. Then edit the address so that the camera's name, date and time are as desired and press enter. The picture opens for viewing. It can also be saved on your computer: right-click on the picture and choose 'save', select destination folder and click save.

If the Pontu picture does not open check that the dates are the same and that the name of the camera is correctly spelled. If opening the picture still fails the corresponding picture may not exist. Most nest cameras do not operate in the dark time and then there are no Pontu pictures. There may also be some occasional malfunctions of the cameras and then some singular Pontu pictures will be missing. To find out if the camera has been on or not try to open some other picture (for example the next/previous minute or hour).

LK-members have developed several tools to view and/or to save Pontu pictures in bulk. Some methods are listed below.

The first tool was developed by debianuser. This tool will work on Firefox, too, though debianuser write the contrary.

[color=#FF8000]In OBSERVATIONS~ ESTLAT Osprey~Madis & Piret's nest ~ 2013 (then moved to Discussions p. 162) on 21 May 2013[/color] debianuser wrote:I wrote a small html + javascript page that allows to quickly switch between snapshots for 2 Osprey cameras. Unfortunately, this doesn't work correctly on firefox (and probably Internet Explorer) as those don't support datepicker functionality for some reason and so I would have to implement that myself in the future.

However, on Google Chrome this will work. You'll get a calendar that will allow you to pick a date.(click on the arrow down, pick date and then type in time. You need to enter Estonian time) Also, you can switch between Osprey cameras.(Kalakotkas 1 and 2).

[color=#FF8000]In ESTLAT Estonian WTE Webcam 2012-2013 on 01 Jun 2013, 12:20[/color] aita wrote:I'm using Pontu-Viewer-v2.2-2013. Our forum member Alex made it.
choose which camera (there is 8 cameras)images you want to watch. choose the month, day and hour. Store photos on your computer to the selected location. either singly or 60 images at a time.
You can download the Pontu Viewer here:
http://www.sendspace.com/file/8miq5m

EDIT: it seems that Alex's program is unavailable now.

The above Pontu-addresses are valid during the nesting season. After the season is over and the cameras are closed the pictures are moved to archive and the above addresses will stop working.

0Hansen, Felis silvestris and i have first downloaded and then uploaded Pontu pictures to other photohosts while they have been available. Ohansen was the first who did this: he uploaded the Saunja pictures of 2010 into Mejuba. i have uploaded the other WTE-seasons (2009, part of 2011 and 2012) to Mejuba as well. Felis silvestris has uploaded contents of these and also other nest cameras to Photobucket and Mejuba. For to get the addresses of these albums send us a pm.

I'm using the procedure which 0Hansen first taught to me, the NeoDownloader, and I'll happy to give advice to anyone who wishes to download Pontu pictures in a bulk to one's own computer. On the average this will mean well nearly 1000 pictures per day (about 250 Mb).

Please send me a pm if you know more tools to view Pontu pictures!
Top

ame wrote: i have some questions..
it can show one one picture at a time, right? if you want to save the picture in your computer how that done?

...how long does it play video? can the video be downloaded to one's own computer?

debianuser wrote:If you click on the photo on my webapp it will open the original pontu link into browser. Also you can just drag and drop directly from image to desktop to save.
For videos, you can't save directly from my page, but you can open ios stream in programs like VLC and then stream it into file.

ame wrote:EDIT: it seems that Alex's program is unavailable now.

aita wrote to me that she has downloaded the program to her own computer when it was still available. now she is able to use it still.

let's hope that Alex will reload his program again when the nest cameras open in the spring.

i have a technical question... For some reason the webcam-link for VCL and Androids (rtsp://193.40.133.138/live/kakk) doesnt work on my smartphone. Does anybody have experiences with that?

I would really be happy if i also could have a look at Klaara when i'm not at home.

the link works correct, I use it with VLC - it is the same link as for Android.
You can try one thing, add a :80 to the link, after the numbers:

If this doesn´t help you either, it may be one of your personal smartphone settings doesn´t allow to access the link ...

I will move your question to our topic "technical questions" - maybe somebody who has more experience with smartphones and is not following this topic, will read it.
Nature does nothing in vain (Aristoteles)
Top
Post Reply
629 posts