A photographic record of seasonal changes in your area.
Post Reply
480 posts

I'm happy that your surgery was successful and you came back home.

Please take care of yourself.
I wish you speedy recovery.

*** Olga, thank you for your nice photos of the raccoon dog. What a surprise.

Good morning to Finland! I hope you had a good night, Olga and you can enjoy your day, even if it must be quite a nuisance not to be able to do anything in the used way! Don't worry, we are here to cheer you up!

Spring is coming, even if we expect snow again here. Hope yours is also going away now bit by bit! Then it also will be easier to go for a short walk and enjoy nature.
“One can measure the greatness and the moral progress of a nation by looking at how it treats its animals” (Mahatma Gandhi)
"You can judge a man's true character by the way he treats his fellow animals" (Paul McCartney)

OK, Margossa and Felis. I have to be careful very careful.

macdoum - thank you for the greeting card you had sent on the 4rth March! It's nice.. I had not opened my g-mail-post after the 4th March.

It's a fun, but I am not like blue or something, of course all this makes me angry and impatient at home, but all that goes by soon after some little rest and the presence of Nappu and Nanu! I was so happy to see the raccoon too!

poor of him/her. Dogs noticed the smell it left here and there, afterwards outdoors they were barking like mad, and Nappu, thanks to heaven, is tied on a 10 m rope. Without being tied she for sure had gone through or over the fence, she is really strong! And heavy (fat??) and very stubborn... OMg..

goodness, our connection is tricky.. I hope this post goes with 'correction's, forgot one word from my, at least..
SHoW(StorkaHolics of the World)
Top

Olga, I'm so happy that you are home at Squirrel Hill, and to see you here

I wish you a good recovery, take good care of yourself

And a raccoon dog has been visiting, very exciting. A question; here in Norway the raccoons are on a "blacklist", not welcome at all, how is it in Finland?
Top

Olga, your health is most important.
I wish you a good recovery. Don't worry, all will be well.

I will wait patiently for news from you.

I have picture for the improvement to mood.
The squirrels from Minnesota.
http://deertrail.us/ 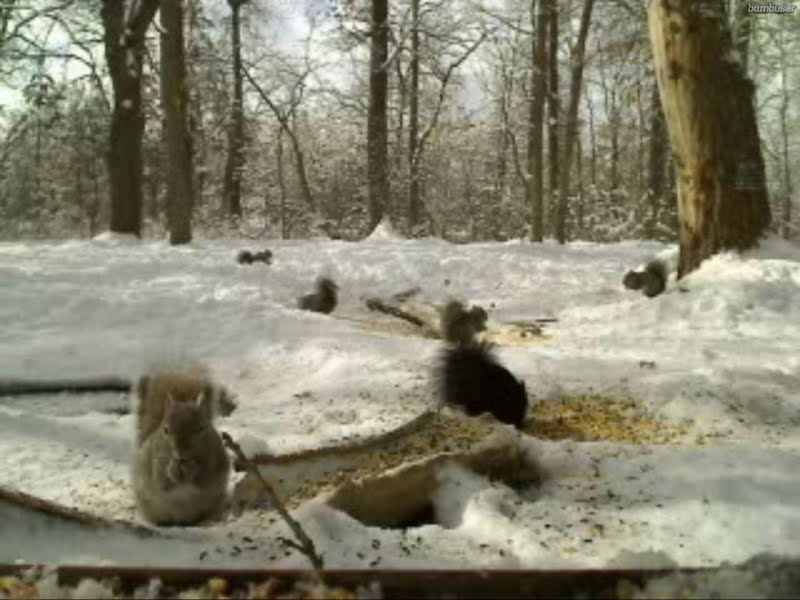 Lussi05 wrote:Olga, I'm so happy that you are home at Squirrel Hill, and to see you here

I wish you a good recovery, take good care of yourself

And a raccoon dog has been visiting, very exciting. A question; here in Norway the raccoons are on a "blacklist", not welcome at all, how is it in Finland?


In Finland the raccoon question is controversial.

Researcher 'H'. says, that major problem caused by raccoon can be seen on 'bird lake shore bird population. For example, that duck populations have plummeted.

But not even the researchers aren't unanimous of the core of the problem.
Is there one or is there not etc...

- In the spring, if you can see ducks swimming in a pair when they should be brooding, you can make the result: a raccoon has stolen the eggs, says researcher 'H', that

Senior researcher 'KK' emphasizes that there is not an unquestionable scientific evidence that raccoon is harmful to bird populations. Predator removal studies have, for example have given results that after hunting racoons from an area part of the bird species there began to grow, and some declined.

An other study in the 1990s even indicated that the raccoon hunting reduced the number of ducks.

- When the raccoon was removed so the fox grew. Fox, however, is much worse predatory birds as raccoon dog, 'KK' says.

It has been counted that just 1/10 of raccoon pups survive. In early summer you can see raccoon dog killed by raccoons while driving car.

But there are people who think that the problem is bad and worsening.

Many plain people just do not care, and I don't remember when I have heard anyone to blame raccoons of something (yes, they can spread rabies and other illnesses! ..(it's being followed, under controll, I suppose) The species seems to be as if accepted somehow (??) to live in our nature en general. It is a new comer (from about 1950).

I do not know much of racoons but I have seen a couple (two raccoons, 'hand in hand') walkin down the hill road towards an uninhabited house, in the night, I just translated some lines from a Finnish (hided the names be cause my translation does not make full right to the researchers and there are some of my opinions between the text and grammar mistakes!

I saw today a goshawk sitting on the apple tree. There may be one reason why squirrels can't be seen at all and birds are hiding and it was quiet. Nappu too, catched a Great tit the other day..

It's difficult to hinder her.
SHoW(StorkaHolics of the World)
Top

Thanks Margossa. Six squirrels in one picture!

To translate the raccoon story was..

but I could not stop it. My PC turned off when my post was not ready. I vacuumed it. Waited for one hour and the machine calmed down, put fingers crossed and pushed the button: go! Here we are

I even found the half ready post as it was!

Wish you a speedy recovery - but be careful and take care of yourself!!! Sometimes it is not easy .... many things you cant´t or shouldn´t do ...

Give yourself time!
Nature does nothing in vain (Aristoteles)
Top

Olga -- it is great to see you back posting -- thank you for the raccoon dogs and the information.

As others have said please be sure to take good care of yourself.
Top

Olga, thank you very much for your translation of the information about the raccoon dogs. I see that they are an issue also in Finland.
The Goshawk can very well be the reason why the squirrels and birds stay away from your feeder. I know the Sparrowhawk is near when my feeder is empty, or when they have not eaten as much as they tend to in one day. In fact, the Sparrowhawk has been around my feeder the whole winter, my feeder is a restaurant

I hope you have a good recovery, Olga

Thanks for the interesting deliberations about the raccoon dogs. It's always a problem if an alien species invades a country.
I hope besides giving us valuable information you are also recovering!

Good news: Baby face visited on the window feeder! His short tail, and his rather small body, baby like profile 100% traits to be recognized from 30 cm far! I have decided not to take videos of them. I have to take en serious the moving restrictions I have been given e g to sit on a chair is practically almost forbidden until the 3rd June! It's only that why I'll not visit here regularly. The temptation to stay sitting at PC is too big...

Good news Olga! And we will be here, when you want to visit and also in June! Keep up the good rehab work! All the best to you!

Olga, thank you for the news from Squirrel Hill.

Best wishes to you

I understand you very well because I have big problem with my backbones too.
I had accident 10 years ago.
I had no surgery and I lay one year in bed and later I could not sit about 8 months.
I have long been rehabilitation and now I feel better (all time I must to remember how to correctly move about ).
Top

: Thank you for the news from squirrel hill. Take care of you and we will waiting to you and our thoughts are with you. Have a good recovery.

Hello Olga! I hope you are doing well! To help you to recover - we have been seeing some of our squirrels lately, today even three, two dark and one red enjoying some spring sun in the trees.
This visited a bit closer the other day:

Olga: I hope also you are well.
Top

Canadian squirrells in Germany? That is very interesting.
Top

Asteria, they are our very normal squirrels here, we have the reddish kind and we have the dark brown ones - http://de.wikipedia.org/wiki/Eichh%C3%B6rnchen - if you scroll towards the middle you see 4 pictures, the second from left shows the dark brown kind. In fact I think they are more common than the red ones.

Here is one of the red ones (an older picture)

Wikipedia also mentions the Grauhörnchen (Sciurus carolinensis), these squirrels are invasive in Europe and on their way to force back the red ones.
http://commons.wikimedia.org/wiki/File: ... 6_edit.jpg
About 50 years ago, a private man brought a pair of grey squirrels from USA to Italy, since that time they increase their population tremendously, to the sorrow of forest rangers and environmentalists.
See here: http://www.welt.de/wissenschaft/article ... nchen.html, there are many other articles.
One planet meets another. Planet 1 says to Planet 2, “Hey you look terrible”. Planet 2 says, “Yes I know. I have Homo Sapiens.” Planet 1 says, “Don’t worry. I had that too and it will soon disappear.
Top
Post Reply
480 posts