What Bird is This?

Yes!! They are related species.

The Black-capped Chickadee (Poecile atricapillus) is a small, North American songbird, a passerine bird in the tit family Paridae. It is the state bird of both Maine and Massachusetts in the United States, and the provincial bird of New Brunswick in Canada. It is notable for its capacity to lower its body temperature during cold winter nights, its good spatial memory to relocate the caches where it stores food, and its boldness near humans (they can feed from the hand).
The woods are lovely, dark, and deep,
But I have promises to keep,
And miles to go before I sleep,
And miles to go before I sleep.
Top

asteria wrote:Thу bird on the first photo looks like a willow tit. Two years ago such birds ate seeds from my palm.


For me bird in first photo also looks like Willow tit. Black-capped chickadee has intense buff color on sides. But if this photo is from North America, then of course Willow tit is unreliable variant.
Top

Another photo of a black-capped chickadee. I know mine at my feeders don't have much coloring on their sides like the other photo I posted. There are more than 2 types of chickadee in the US, too. Here's a Mountain Chickadee from the more western regions of the country. Can anyone identify it, please?

I think it is a young Steppe Eagle (Aquila nipalensis).
"One can measure the greatness and the moral progress of a nation by looking at how it treats its animals." - Mahatma Gandhi
George
http://madarlesok.lapunk.hu/
Top

Heavens, I haven't looked at this topic for a long time.
Must do better.
Top

Can someone tell what Eagle(?) is this? I am from North America.

Sorry about the quality, I made it using my cellphone's camera through a binoculars and a dirty window.
http://pontu.ca/ Pontu video and picture archive viewer with easy date and camera selection. *Generating Snapshots for most cameras that don't normally take snapshots*
*Note that snapshots generated by me are only stored for 3 days due to disk space limitation on the server.*
Top

this is not an eagle for sure, perhaps a falcon or smaller species?
Top

I suspect it is a hawk, probably a buteo. Red-tailed hawks seem to be the mostly likely. But keep your eyes peeled for more sightings, maybe you will see a detail that will prove it one way or another.

NancyM & alice44, thanks for you answers. Yea, it does look very similar to Red-tailed Hawk from that website you gave me.

He/she refused to fully turn to the camera.

[color=#FF8000]On 20 Jan 2015, 16:52[/color] ame wrote:i have a bird identification problem. what bird is this singing very close to the camera?
right in the beginning there is a chiffchaff singing a little further from the nest. then the eaglets both talk a little. then the unknown bird begins and sings for a long time... and again eaglets make some very drowsy squeaks, and some louder, too. sometimes also a golden oriole sings and there are some other voices, too, but they are much further away than this mystery bird.


i have a hunch that the unknown voice might belong to a blackcap (Sylvia atricapilla).

(i hope it is not as trivial as the chaffinch was in the summer...

vainamoinen wrote:Yes you are right, ame, this is Sylvia atricapilla. 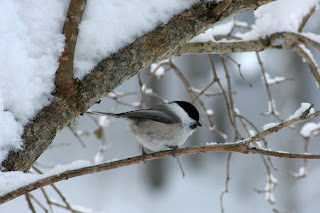 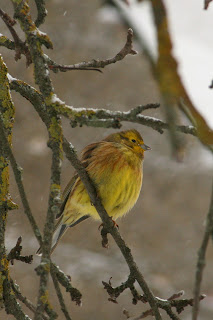 this is an old question already which raised some discussion on this thread but i don't think it got a full and/or definite answers yet.

andu didn't write where these pictures were taken and that is very important to know, like vainamoinen and chimega wrote in their answers. as i am a Finn i naturally saw in these pictures two birds which are common in Finland (and i believe also in Estonia). i think that the upper bird is willow tit (Poecile montanus, formely know as Parus montanus) like vainamoinen wrote. another possibility is marsh tit (Poecile palustris, formerly Parus palustris). these two look so much alike that one should hear the voice to be sure of the identification. - i think that the question about these two has been discussed on the bird feeder topic every winter.

i think that the second bird is a yellow hammer (Emberiza citrinella). - but if these birds were photographed somewhere else than in Northern Europe then i'm not sure at all what they are!
Top what bird is this? We found it with broken wing, soon we'll bring it to vet-clinic.
Top Yes, this is Nightjar
Top

Thank you very much! Marfo and vainamoinen

Beautiful! One of my favourite birds. You're lucky to see one so close!
Top

Thank you! That bird is beautiful!

But it was heartbroken to look at the broken wing

and also it can not walk on the ground, and it was very afraid