"Phoo Chan, a talented California-based bird photographer whose photos have been featured by National Geographic, has captured an incredible, once-in-a-lifetime series of photos of a crow landing and riding on the back of a bald eagle mid-flight."

According to the an article in the Irish Examiner, the eaglet had a large amount of food in its crop, and both parents brought a lot of prey into the nest. "The food was not being absorbed into its stomach and it probably choked eventually", said eagle project manager Allan Mee. Irelandswildelife.com confirmed that a "post mortem at the regional veterinary laborotory established that the chick died of natural causes — it’s intestine blocked by a sheaf of long tail feathers believed to be from a young crow.”

A male sea eagle and his two chicks which were found dead in the nest area two weeks ago were poisoned, tests have confirmed. Investigations that will give a definite answer concerning the dead female which was found some days later at the same place in Dithmarschen near the village of St. Michaelisdonn have yet to be carried out.

According to an NDR article, the three raptors have been poisoned by the illegal insecticide Mevinphos. At least ten White-tailed Eagles died from pesticide poisonings during the last years in northern Germany. See also: April 26th 2012 viewtopic.php?f=46&t=236 and June 23rd and June 25th 2015

A complaint against the unknown perpetrator has been filed. The World Wildlife Fund and Projektgruppe Seeadlerschutz (Protection of the White-tailed Eagle Project Group from Schleswig-Holstein) have offered a reward of 5000 Euro for information leading to the capture and conviction of the perpetrator(s).

One reason for the illegal persecution of predators is, according to a statement from NABU Schleswig-Holstein in 2011, the traditional but wrong idea of many hunters who believe they have a right to control the numbers of birds of prey and mammalian predators. Cats, dogs and also children are vulnerable to poisoned bait left out with the intention of "controlling" these animals.

Similar cases have been reported in several other European countries. The photo above shows a six year old female White-tailed Eagle, found dead in her nest in Connemara (Ireland) on 1st April 2015. Subsequent post-mortem and toxicology analysis revealed the bird, which was within a few days of laying eggs, had been poisoned. It was the 13th confirmed poisoning of a White-tailed Eagle in Ireland since the reintroduction project began in 2007.

Ireland: Will Star, the “widower” of the poisoned female eagle, find a new mate?

On 1 April 2015 the mate of the satellite tagged White-tailea Eagle Star was found dead on the nest in Connemara (see text and photo above, July 7th).

“White-tailed Eagles usually pair for life and take some time to get over the loss of a long-term mate. Indeed we have seen how parents seem to “mourn” the loss of a chick by spending days close to the nest as a pair, often calling for long periods (excuse the anthropomorphism but it’s hard to describe some eagle behaviour without using human terminology!). Well after spending the next week around the nest site in Connemara after the loss of his mate, Star headed off on a trek across Ireland, leaving on 6 Apr for the Longford-Westmeath border.” Source: Golden Eagle Trust, 16 July 2015. Read more: http://www.goldeneagletrust.org/index.p ... Itemid=132
Top

“Check out this epic aerial battle between a bald eagle & two seagulls. David Canales captured this once-in-a-lifetime photo from his kayak on Prince William Sound in Alaska while on an 11-day expedition from Valdez to Whittier.” Source: U.S. Department of the Interior https://www.facebook.com/USInterior/pho ... 08/?type=1
Top

The Golden Eagle Trust left a remote camera up a tree over-looking a red kite nest in November 2014 and got the cam back again in late June. Now they published photos of the visitors. The species who checked out the kite nest during winter and early spring were very similar to those which could be observed at some LK nests. According to the Golden Eagle Trust, the red kites began to rebuild the nest in spring, laid three eggs and hatched two chicks. 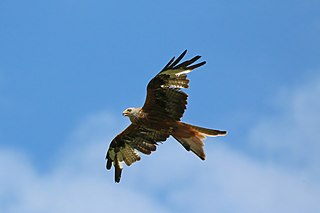 By Charlesjsharp (Own work, from Sharp Photography) [CC BY-SA 4.0
(http://creativecommons.org/licenses/by-sa/4.0)], via Wikimedia Commons

"White-tailed eagles represent no competition for fishermen. This has been shown by researchers of the German Leibniz Institute for Zoo and Wildlife Research (IZW), based on the first field study about the foraging behaviour of the white-tailed eagle (Haliaeetus albicilla) in Northern Germany. Furthermore, the study allows important insights in the hunting behaviour and relevant conservation measures of this species." 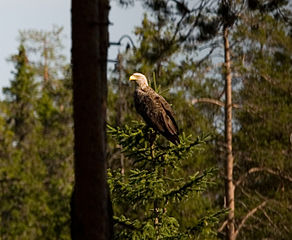 According to LZonline, a farmer observes since more than 20 years the family life in the white stork nests on the roof of his home in the village of Barförde, administrative district of Lüneburg. Now he had an unusual experience: A young White-tailed Eagle attacked three ten week old storklets and grasped the smallest bird. The eagle was chased abway by another bystander and dropped his prey. Interestingly, the raptor is still often seen in the village and at the farm near the Elbe river. Even though the eagle was born “in the wild” (ringend in Schleswig-Holstein), he is not shy at all.

Usually I don´t post falconry stuff like this … But have you ever seen a buzzard and an eagle from this angle? Click here to see the stunning images http://www.deadlinenews.co.uk/2015/07/2 ... y-buzzard/
Top

Ireland: Update on Aoibheall, her siblings and the reintroduction project

This maiden flight is a great success for the Irish reintroduction project. And it is the third successful year in a row for the local breeding pair Caimin and Saoirse, both natives of Norway. According to The Golden Eagle Trust, the parent birds were hatched on the island of Frøya and were collected under licence and released in Killarney National Park, Co. Kerry. In 2013 this couple reared the first chicks to fly from a nest in Ireland in over 100 years.

A juvenile White-tailed Eagle above its nest on Litløya, Norway

One hundred White-tailed Eagles were released between 2007 and 2011 in the Killarney National Park. To date about 30 birds have been recovered dead, mainly due to illegal poisoning. Among the victims was one of the famous siblings from 2013. This son of Caimin and Saoirse was found dead seven month after leaving the nest. A post mortem showed that the young raptor had been shot.

Aoibheall, the female chick born in 2014 at Lough Derg, was fitted with a transmitter. Like her this year´s sister she left the nest when she was over 12 weeks old. She was fed by her parents near the nest, and the GPS data proved that she stayed within two kilometres of her home. In late November the first longer trip was reported (about 20 kilometres), seemingly “monitored” by her father who was coincidentally spotted in the same area on the very same day. In mid-December Aoibheall became more adventurous and left the region. The Golden Eagle Trust was able to follow her via GPS until early spring.

According to an article, published on Wednesday in The Clare Herald, project manager Allan Mee told the newspaper that “the transmitter happened to somehow fall off Aoibheall and was located shortly after the reading remained static.” Her fate is uncertain. Mee said “there are no recent sightings of her” – but “hope remains that she is safe.”

Aoibheall´s transmitter was reused. Her sister Cealtra carries it now, and if everything goes well, her movements will be tracked over the next years.
Top

The eagle has (crash) landed - Durberts, the young Latvian “TV eagle”, gets his/her 5 seconds of fame

You can support the Latvian Fund for Nature by donating for nature conservation in Latvia. The LFN has been granted Public benefit organization status. Read more http://ldf.lv/en/support-lfn

If you want to support the non-profit organisation Looduskalender, which is maintaining this website and most of the camera projects, click here to learn more http://www.looduskalender.ee/en/node/3058

You have also the possibility to support Kotkaklubi, the Estonian Eagle Club. Information and details: viewtopic.php?f=63&t=509
Top

“The researchers have noticed a trend: the higher the specie’s protective status, the better it does. ‘Species like the Crane, the Tawny Vulture and the White-tailed Eagle are doing very well in Europe, compared to other species which have no or little protection. Their populations have exploded. There are 100 times more White-headed ducks and 5 times more Dalmatian Pelicans than a few decades ago`, claim scientists from BirdLife International.” Read more: http://brusselstimes.com/world/3701/the ... -a-success

“The first White-tailed Sea Eagle nests in Co. Kerry in over 100 years have successfully fledged chicks in 2015! Two pairs, one in Killarney National Park and the other on the Beara peninsula near Kenmare, fledged single chicks at each nest.” Read more: https://www.facebook.com/permalink.php? ... 4808950774
Top

Depending on the environment, White-tailed Eagle nests are placed in trees, on flat grounds or on small outcrops

These siblings, male and female, hatched from the second clutch of the “TV breeding pair” after the first clutch was destroyed by a marten. Details here, April 23 and 24 viewtopic.php?f=46&t=236&start=280

Perfect mix of art and science: The Unfeathered Bird

Beautiful footage of White-tailed Eagles and their habitats in Hungary, Austria and Norway. Information on carbofuran and lead poisoning. Der Flug des Seeadlers/The flight of the White-tailed Eagle (in German)

New video from Denmark: Four eagles and an eel in the nest

“White-tailed eagles detect and avoid the ingestion of large metal particles (larger than 8 mm) but ignore smaller metal particles whilst feeding on shot mammalian carcasses. Lead-based bullets split into numerous small metal fragments when penetrating an animal's body, whereas lead-free rifle bullets either deform without leaving any particles in the tissue or fragment into larger particles. Thus, the use of lead-free bullets may prevent lead poisoning of scavengers. These findings have recently been discovered by scientists of the German Leibniz Institute for Zoo and Wildlife Research (IZW) and are now published in the scientific journal European Journal of Wildlife Research.”