Add a Link or an Article

by ame
i've been studying copyright issues for some time and i wrote what i found here on our copyright-thread:
viewtopic.php?p=291322#p291322

i'll reduce my translations above into summaries which are 'legal' to make.
... done it!

ame wrote:if it is not ok to make brief summaries of the contents of news on the 'i read in the paper NN that...'-basis then i'm afraid that the whole process of asking permissions for each article separately will be too time-consuming for me...

i've removed the pictures now. people can see them easily in the original webpages. please tell me if i need to remove the longer 'translations' that i made.. and the other stuff...

Thank you for removing the unauthorized photos.

Concerning the long(er) texts you have already posted: You can cut them as you suggested (very brief description of the content), delete them or contact the editors/authors.

Screenshots of Google Maps: The “Permission Guidelines for Google Maps” provide information on this and other subjects. Please visit the website if you are interested. As far as I know it is no problem to share just the URL of a map – click on the chain symbol beside each Google Map for this purpose. OpenStreetMap is perhaps an alternative, but I´m not familiar with this service.

Other stuff from print or online sources: If you did not create it yourself and want to reproduce it, you´ll need in most cases a written permission from the originator. This applies to pictures and texts as well as to tables, graphics etc. - this is why you´ll find only a few pictures and complete articles here.

Thanks again for your efforts. If you have any further questions on ‘WtE in the Media’, send me a PM please.

Edit: Good idea to shift your findings about copyright questions to the corresponding topic. So I delete the last message about this subject here.

by Felis silvestris
Looks like a juvenile: http://www.nordkurier.de/prenzlau/seead ... 78207.html

4700 g heavy female sitting on the ground, not being able to fly away. Was taken into medical care at Naturschutzstation Woblitz (Brandburg)

by maertha
I had it on my list of articles, thanks.

by Felis silvestris
I got this as it mentions LSE too, it's a "first online" from Journal of Ornithology and will be published later in the journal.

by maertha
Thanks, I´ll add the link. 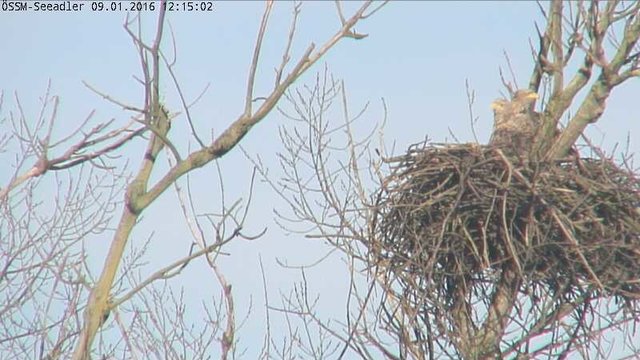 Thank you for thinking of the database!

During the weekend our colleague from Saldus part found an injured sea eagle in a field near the highway. At the moment, the bird is taken to the Riga National Zoological Garden, where it will be treated and after medical care, the mighty bird will be released back. 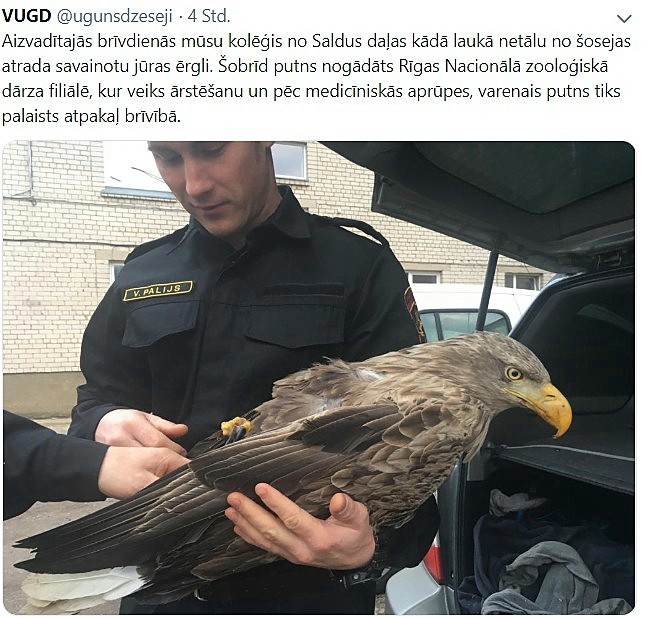 During the weekend our colleague from Saldus part found an injured sea eagle in a field near the highway. At the moment, the bird is taken to the Riga National Zoological Garden, where it will be treated and after medical care, the mighty bird will be released back.

by Liz01
Traps - Threat to Birds and Animals‼

Uģis Bergmanis, Senior Environmental Expert, JSC "Latvijas valsts meži", says
that on January 7 this year he received information that a big bird with a chain at the foot of the leg is on the outskirts of Kārsava:
"The bird was very hungry, so wild birds were abnormally staying near farmsteads where they were fed by meat and fish. On 4 February, the big bird was caught near Karsava, in a farmyard yard, where it sought shelter for people, hoping to find food." The hostess brought in the warmth of the birds, but its forces were exhausted and failed to save
Going to the scene and looking at the dead bird, it turned out to be a young sea eagle whose leg had entered the metal trap. The strong bird had fallen, but was unable to get rid of the trap that prevented it from flying and hunting freely. Obviously, someone had set traps on the bait to catch the canoes or foxes.
Ijā In Latvia and other European Union countries hunting with such traps is forbidden, as it also includes protected birds and animals that are not allowed to be caught and killed. Such unlawful hunting tools are particularly dangerous for wintering sea and rock eagles, chicken hawks and also for owls, which in Latvia live mainly in dead animals for survival in difficult conditions of winter and survival.

During the last days have been a lot of news and articles about reintroducing White-tailed Eagles (and even Golden Eagles) to Wales - and report about sighting of a WtE in the New Forest, Hampshire countryside


And - of course - as soon as it comes to discussion about reintroducing WtEs, there are concerns, too ....

Take a sneak peek at the upcoming documentary "Fragments." This feature length documentary is being produced in partnership with the Audubon Society of Omaha and will be released in the second half of 2019.

by ame
fresh from the press:
the first WTE couple since immemorial has started attempting breeding near down-town Helsinki:
https://www.hs.fi/kaupunki/helsinki/art ... 99471.html

a WTE couple has started refurnishing a grey heron's nest for their own use on island Loppi (the Swedish name of the island is Klobben), about 5 km away from the centre of Helsinki. 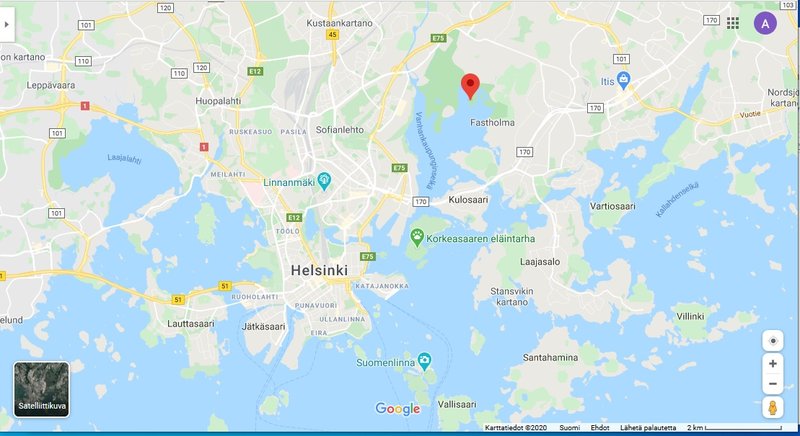 the nest is well visible from several bird watching towers around the bay Vanhankaupunginselkä.

a video of the eagles here:
https://www.hs.fi/kaupunki/helsinki/art ... 99914.html
(i'm not sure if these are visible outside of Finland)
edit: i have been told that the video is visible also outside Finland.

by ame
news from the Helsinki City-WTE nest: it seems that the chick(s) have hatched. parents are carrying food to the nest. 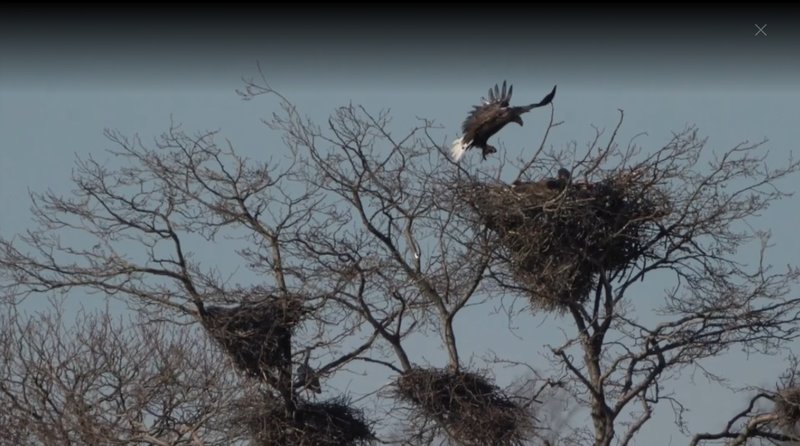 in this last video the gentleman in the grey cap is Hannu Ekholn, who has been ringing WTEs in SW Finland for decades. respect! 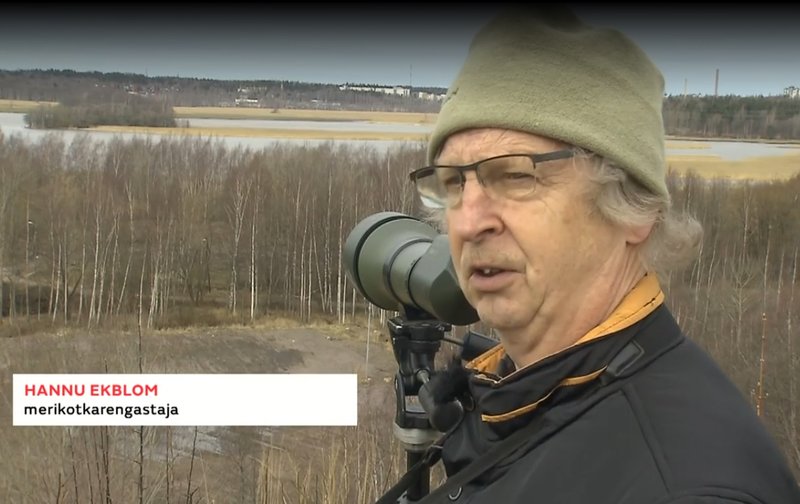 he ringed for example the eagle who was seen on the seal island in the beginning of March. he is wondering in this interview if the branches of the nest tree in the background are strong enough t´so that he could climb up and ring also these chick.

the texts of news are in Finnish but you can use a translator. the articles are more or less perfect transcripts of the talk on the video. i hope that the videos can be viewed outside Finland, too.

...
the texts of news are in Finnish but you can use a translator. the articles are more or less perfect transcripts of the talk on the video. i hope that the videos can be viewed outside Finland, too.

ame, thanks a lot for the great news from your homeland. The video is also available for me. I just had to turn off adblock. That's fine"

by ame
more news from the City-WTEs in Helsinki:
they have three eaglets!

and they are big, much bigger than "my" chicks in Durbe. 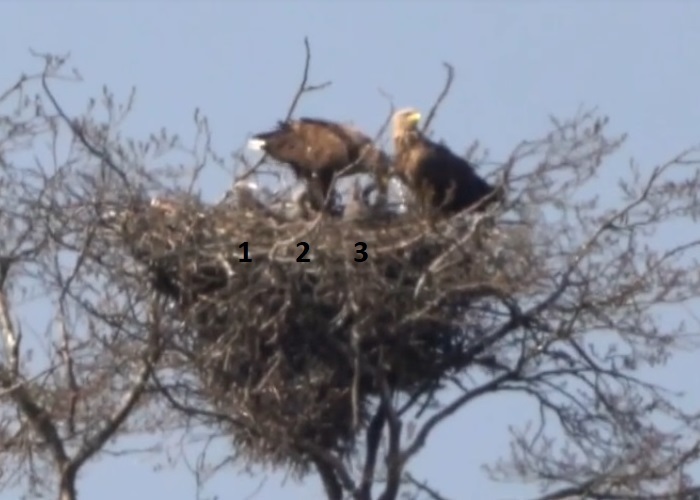 sorry about the quality of the picture. it's a screen capture from the video. it was shot on a sunny day with a lot of thermal ripple due to uneven convection in the air between the camera and the nest.

here's the link to the news. again it's in Finnish (and loaded with advertisements) but it should be possible to translate and video should be playable.
https://www.mtvuutiset.fi/artikkeli/hel ... #gs.5zcjb6

by Liz01
WEDNESDAY, MAY 06, 2020
Berlin & Brandenburg
Tree again felled with sea eagle nest in the Uckermark
Uckerland (dpa / bb) - After trees have been guarded with sea eagle nests in the Uckermark district since 2018, such a brood tree has now been felled illegally. The perpetrators had also removed the eggs or the newly hatched eaglets from the destroyed nest in the week after Easter, said the local administration of Uckerland (Uckermark) on Wednesday. The pair of sea eagles had only settled in the area in the spring. According to the municipality, the perpetrators face imprisonment of up to five years.

The previous protection of the trees is based on the assumption that the destruction of raptor nests is related to the construction of wind turbines. The mandatory distance criteria in Brandenburg stipulate minimum distances to the breeding grounds of endangered species. In the case of the sea eagle it is 3000 meters.

A regional train collided with two white tailed eagles on the Pasewalk-Neubrandenburg railway line. One of the birds of prey died immediately. The second had got stuck in the front of the locomotive and was discovered during an inspection. Despite rescue efforts, this animal also died from serious injuries.

I just read it in the Ostsee Zeitung
https://www.ostsee-zeitung.de/Nachricht ... schlaefert

So far, it is certain that the approximately six-year-old male sea eagle is almost unable to fly, because numerous feathers have broken off on his wrist. Visually, he is also slightly emaciated. The X-ray revealed no evidence of the cause of the injury.

The eagle will have a new home in the wildlife station until its feathers have grown back, the police announced. Then he will be released safely into freedom.
https://www.cellesche-zeitung.de/Der-No ... n-Seeadler:
All times are UTC+02:00
Page 3 of 4