I think, the problem is, that we are not able to watch them the hole time. Over a longer distance of watching you can see the little differences between the individuals. The ravens were fascinating and there view also. I hope, that we will see them at this place.

Have a nice night.

Bleggi wrote: Hello greeneyes: Sometimes I think sitting in the nest is a young one and on the rim or the railing is an adult. It is a pitty that this birds couldn't get rings for knowing who is who.
I am always happy to see a raven here.
Greetings from Bleggi

This seems a good guess. Often I see starlings and jays sort of like that -- it seems the youngsters sit lower and the parents look out. And it this case, one would expect that the youngsters would could go to their nest.

by Bleggi
Now I think it is coming to an end with the ravens on this place. I did not see one of them since last time when I showed a pic. This pic is to see now: 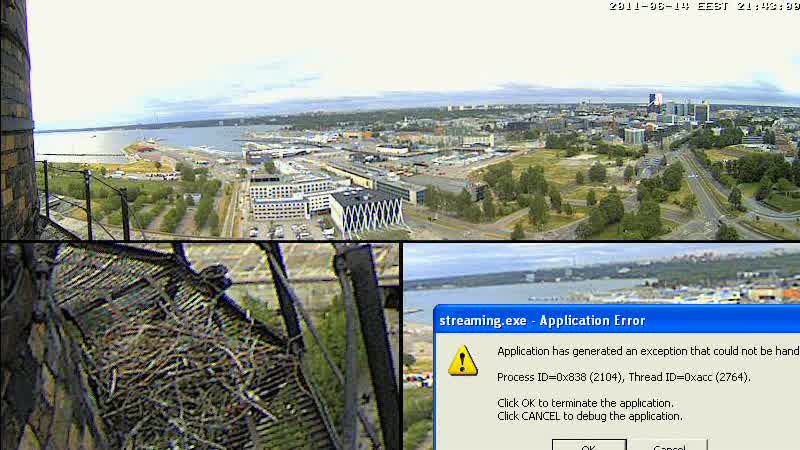 until next breeding season. Thanks for everything.
Bleggi

by greeneyes
Today a short visit at the old home.

Crying against the gulls.

Report about the people in the last 20 years. Wonderful buildings,too and ...

edit: 2011-08-20 - 13:35
It is a pitty that in the report they haven't any pictures of Talinn. In the film it was so great to see many buildings and I was always waiting for going to the harbour and looking around and.... yes, they did and I saw the chimney - sometimes they came nearer and I saw a bit the flat where the ravens lived. I was so glad - you can't imagine!!!
All times are UTC+03:00
Page 13 of 13