8:05. Iiris, is calling for a fish.
The chicks have been flat for a while now.
Kitarr, I think that there have been intruders around. I can faintly hear a Crow, or some such. Iiris, does keep the chicks in flat position, a lot. Or so it seems, to me.
Either there are more intruders this season, or Iiris, is more concerned than other females, that we watch online.
Top

8:24. There are two different birds, not Crows, making sounds, that I’m not familiar with, in the vicinity of the nest.
Where is, mogga, when you need him?

they are preening and doing some wing work!

The chicks are voicing their happiness!
Top

What species is this bird, singing ?
Top

11:38
Oh heavens, look at that - UM is preening its plumage when a breeze comes up and inspires it to try its wings in the wind 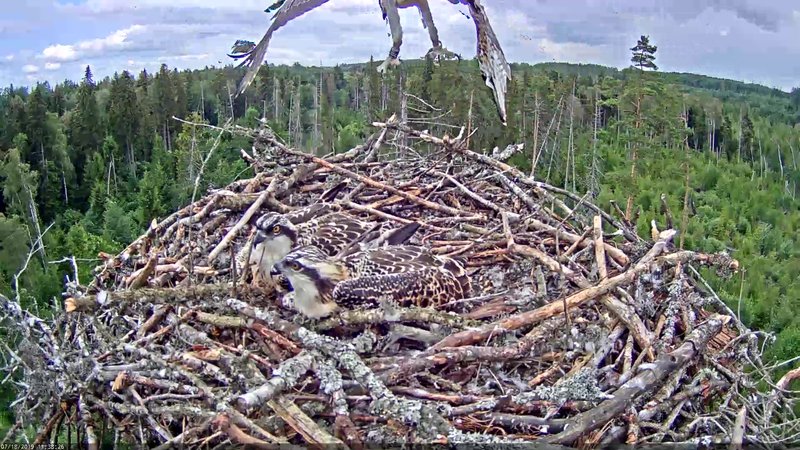 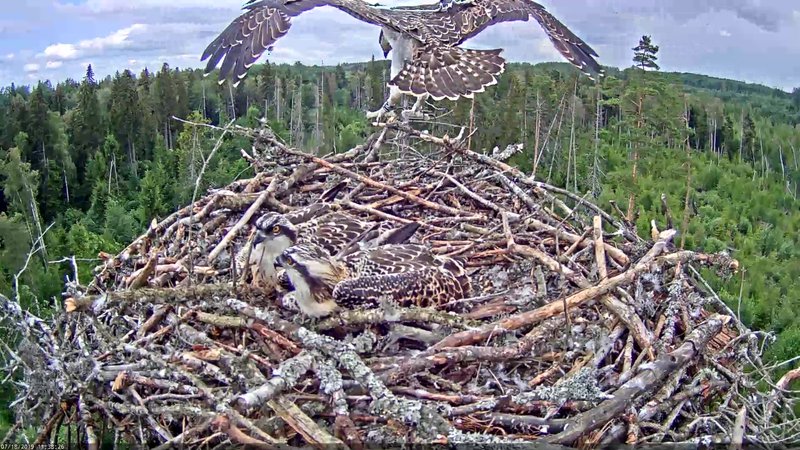 OMG - UM is a daredevil

...and again the sisters didn't even give a look at him

12:15 Iiris brought a big fish and gets hugged with wings 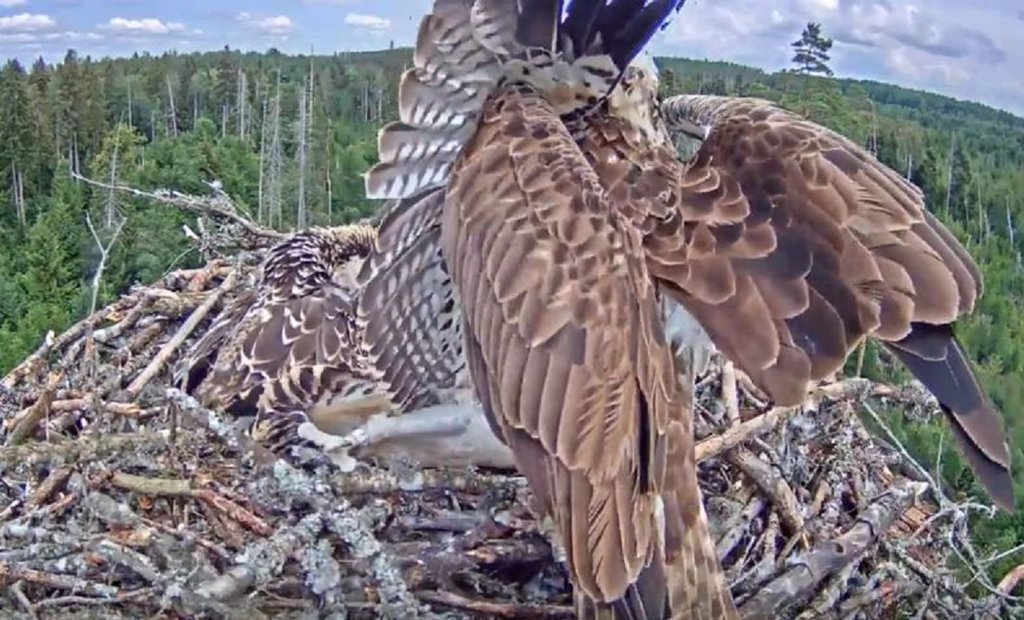 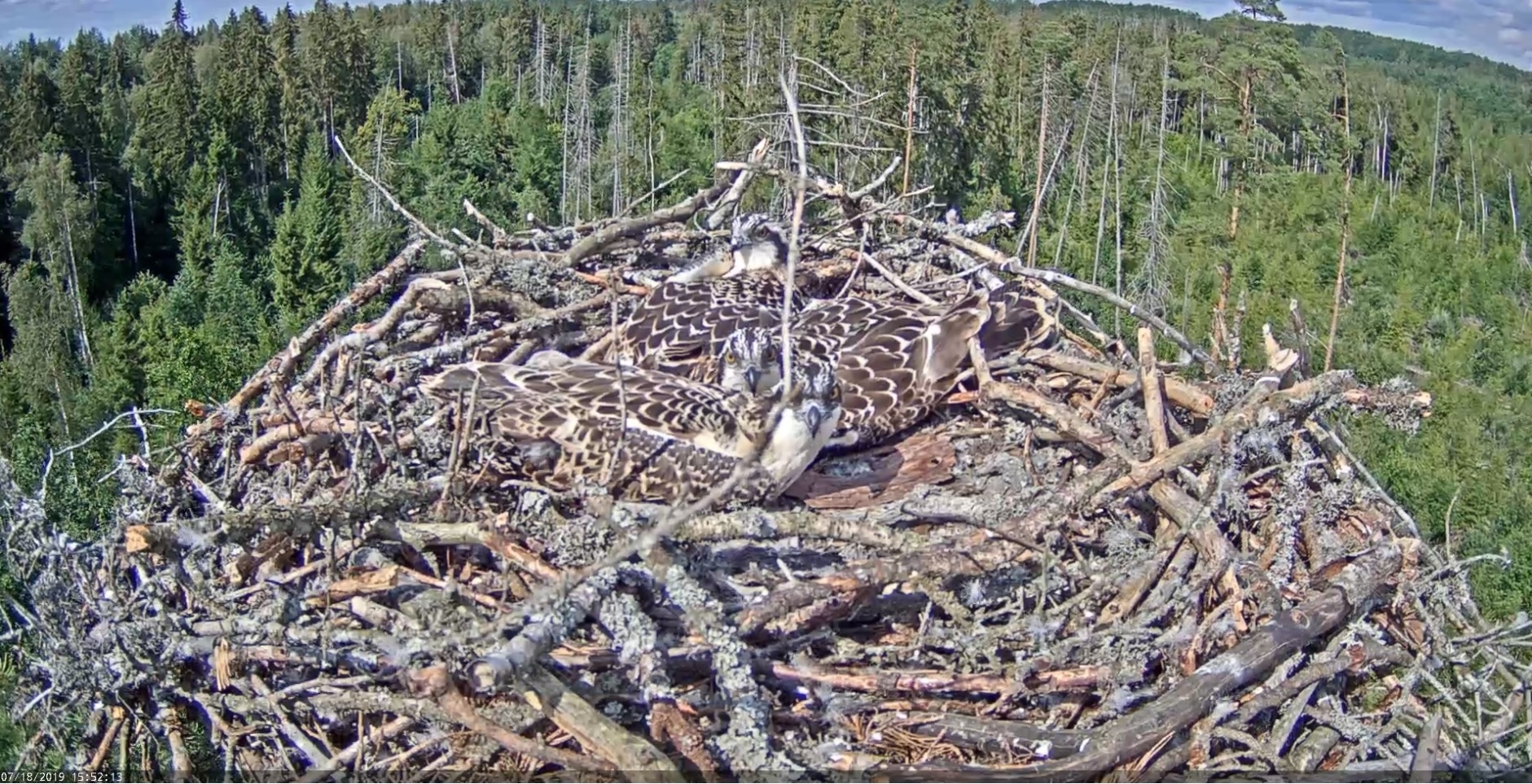 In this nest: I think UP has a fish and is eating it like an adult - who delivered and when?
EDIT: it is UM ... I wonder whether UM would be Oldie after all, he seems to be ahead in development in many ways compared with his siblings ...

I almost hope to see a little fight, then we would know who provokes (Smallie), who gives back (Oldie) and who chooses to stay submissively away (Middlie) ... but it can be so, that they have passed that age already ...

16:35
Ivo was there for a second, I think with a headless fish, but he took off very soon - with the maybe-fish

There is though a headless fish in the nest, which one of the chicks is working on.

16:37
Iiris arrives and watches chicks to take care of the fish independently. I saw UP eating this fish for a good while
Top

Such sad news...
I really thought the chicks were to big by now for this to happen
Top

16:35 ivo left the fish in the nest and the chicks started eating

At 15:53 Iiris brought half a fish and UN took it from Iiris but then UM grabbed the fish and started eating. 15:55 Iiris left the nest.
Top

I was on the other cam when it had happened
Top

Also other predators have to survive, and they are brave, the hawk knew that the ospret had not fledged yet. Fingers crossed that the hawk doesn't return to that nest before the last chick has fledged

And fingers crossed that hawks don't discover this nest!

Life in the nature is both winning and loosing.
Top

18:54
Again, I see a headless fish in the claws of UM, who delivered and when? The chicks don't seem to have decided yet whom the prey belongs ... hard to see the rings once again

The chick whose some wing feathers are sticking out got the fish - but something is bothering them all, the other two lie flat a moment

19:21
I see at least two fish remains on the nest, only one is being eaten by one of the "anonymous" chicks

So from now on Iiris doesn't seem to help her offspring by tearing the fish but leaves them to clear up it themselves? And so in the beginning of this new phase the self-feeding will take some more time than Iiris' supply.

19:35
Iiris in with a headless fish - will she now conduct the feeding?

Oh, yes! No possibility to see who is/are being fed, Iiris blocks the view effectively

yes, the one on the left is UP, others covered by Iiris
Top

19:35 Iiris comes from dead tree with a huge headless fish 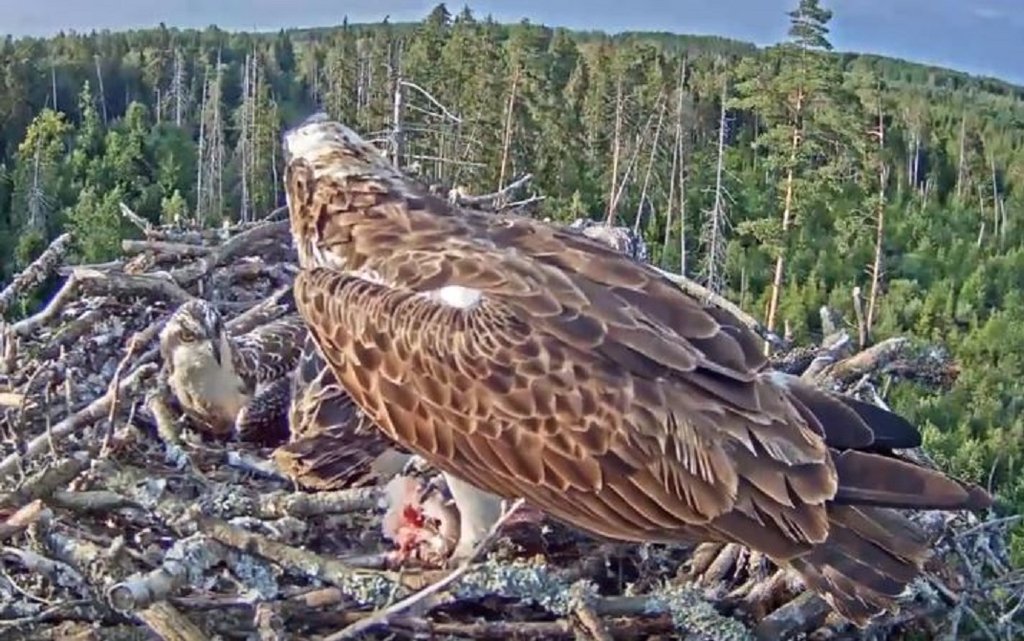 not good to see on the picture, the fish is huge 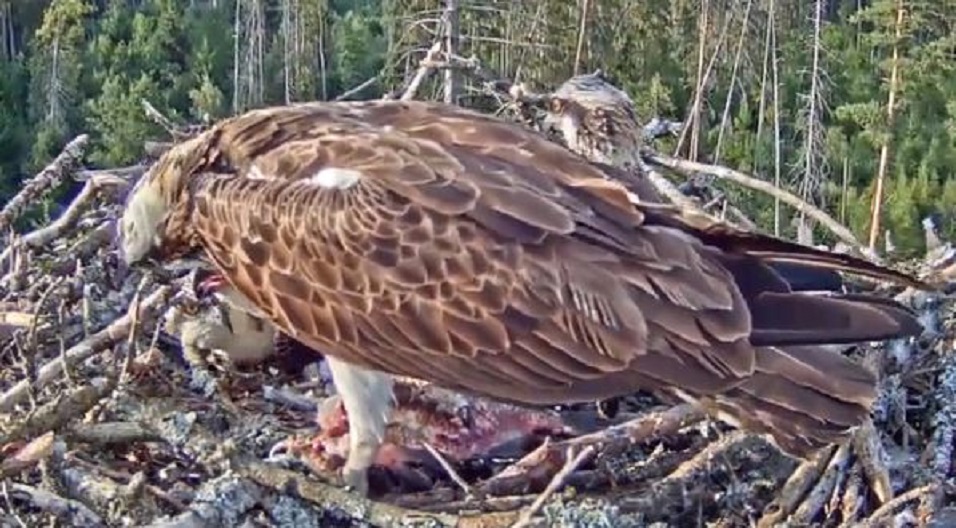 the two on the left are begging loudly, the one in the middle got the first bite 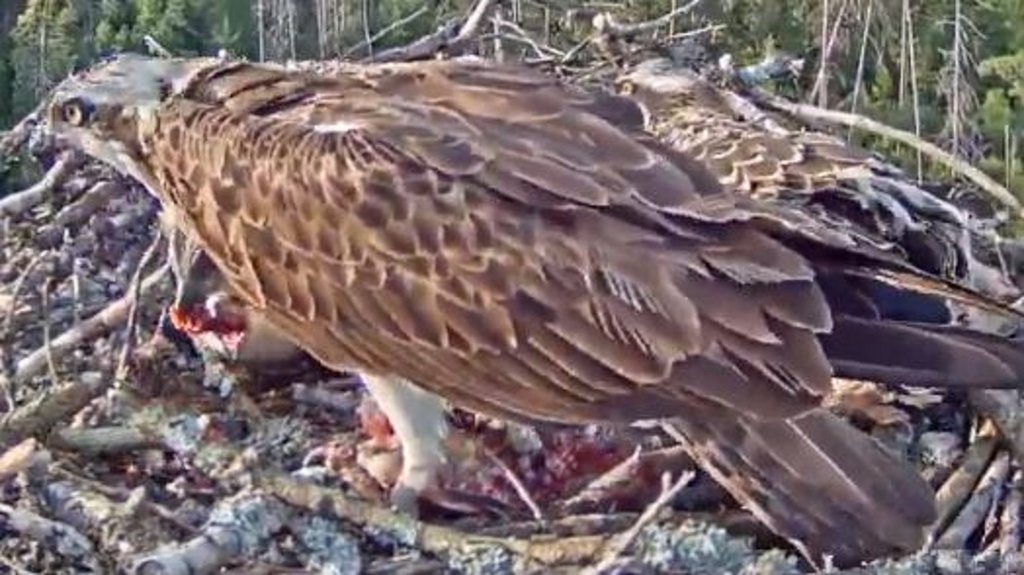 It seems the goshawk population has actually risen. How many chicks of the webcam nests have become victims of the goshawks this year..... really sad.
Top 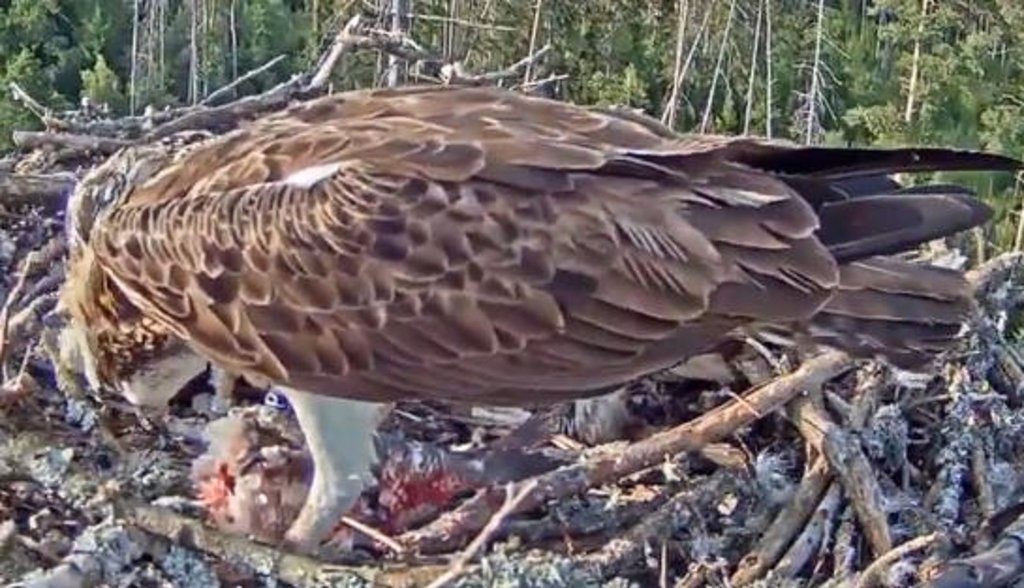 the ospret on the left is still laying...

...and waiting. But the fish is so big it will be enough for at least two osprets 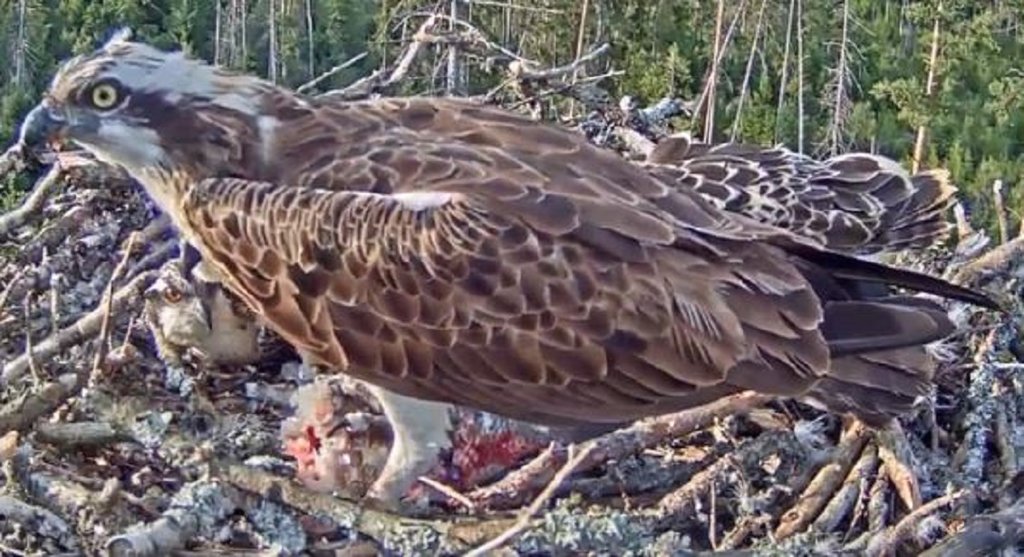 21:33-21:34 he leaves with his fish - apparently he doesn't trust the self feeding offspring

- Or - the offspring was satisfied so far.
Top
Post Reply
6100 posts