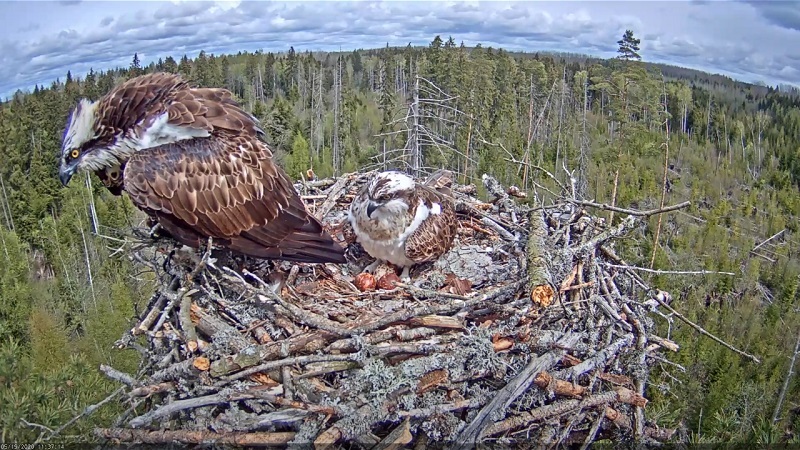 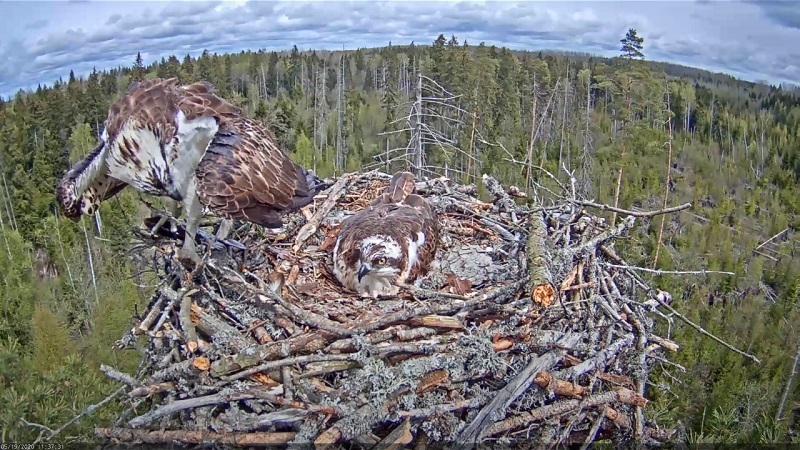 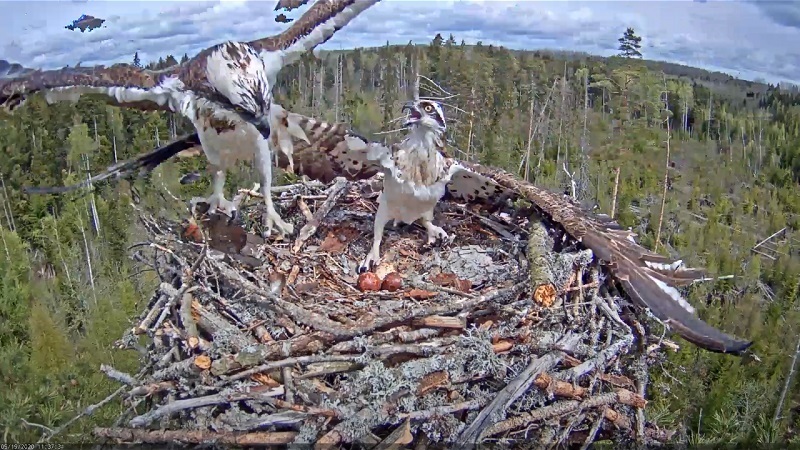 Seira, thank you for the pictures.

In the last picture Iiris said all she had in mind. Is it possible that her look moved from fish to the stranger and then she understood it's not Ivo? 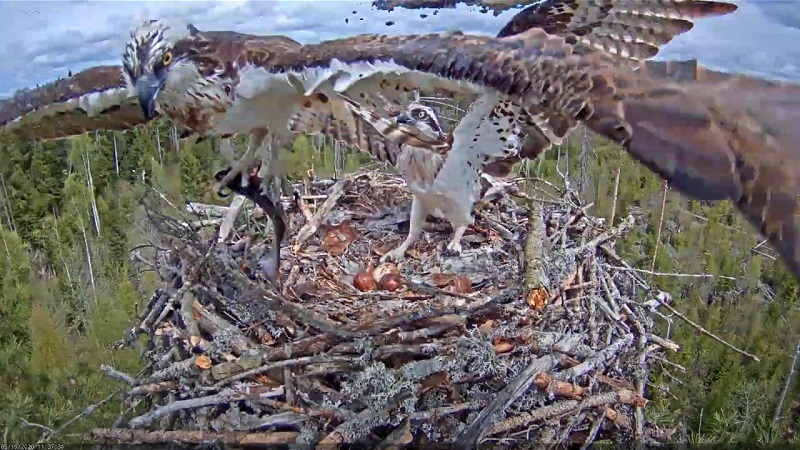 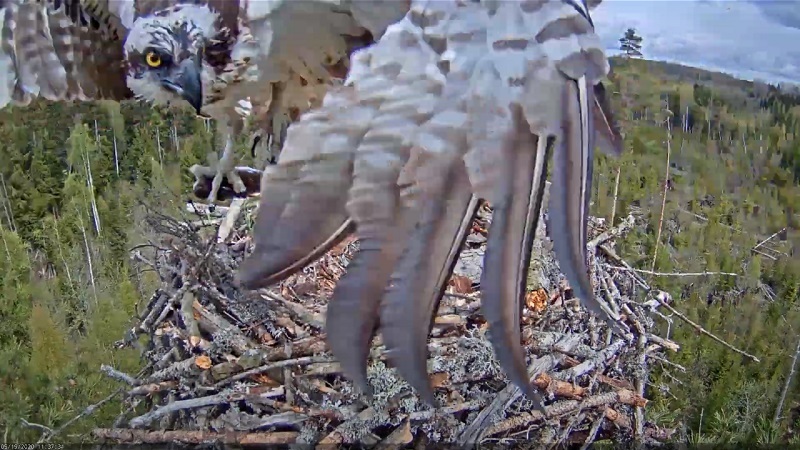 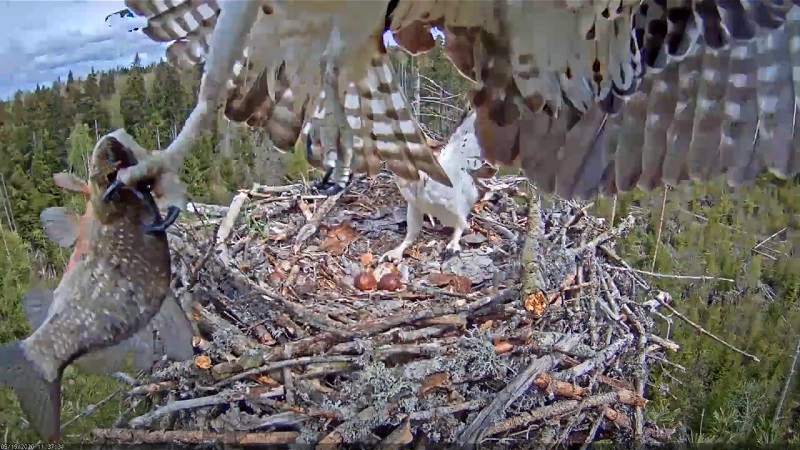 It's a pity that this juicy fish flew away and Iiris had to go self-catering again.
Top

Summi wrote: ↑May 19th, 2020, 2:39 pm In the last picture Iiris said all she had in mind. Is it possible that her look moved from fish to the stranger and then she understood it's not Ivo?

When the visitor hurriedly landed in the nest with the fish, Ivo was on the camera and the shadow could be seen at 11:36. I guess, the visitor might worry about the fish falling, so she/he landed urgently. It is a pity that the fish did not fall into the nest, and Iiris seemed to want the fish very much.

Wow! What a look! Thank you for a great capture!

17:20 Ivo sees Iiris eating fish and takes off to drive Iiris to the nest. Was she in shock and away for almost 5 hours after the visit of the strange osprey?

17:21 Iiris lands on the nest with the fishtail, shakes it off the claws and sits on the eggs
Top

Thank you all for the pics and comments! Wow, what an interesting encounter with the strange osprey landing with a fish ..

Seira, some of your shots are amazing!

In Gavril's video it is visible that the stranger landed with his left foot in a clumsy, distracted way - on Iiris's wing

The visitor was a male, for sure. It had very long, slim legs like males do; it was alert and stressed, with fluffed up feathers, because it had apparently just been chased by Ivo; the stranger was glancing around and sounding alarm at the beginning; Iiris did not get that defensive at all and instead laid on her eggs. She would have never tolerated another female like that.

And, most importantly, he put out his wings in a submissive way like Ivo does in front of Iiris, turned to Iiris his back and bended his head - the usual male pose to demonstrate to the female that he is not a threat.

A screenshot from Gavril's video, the visitor, submissive: 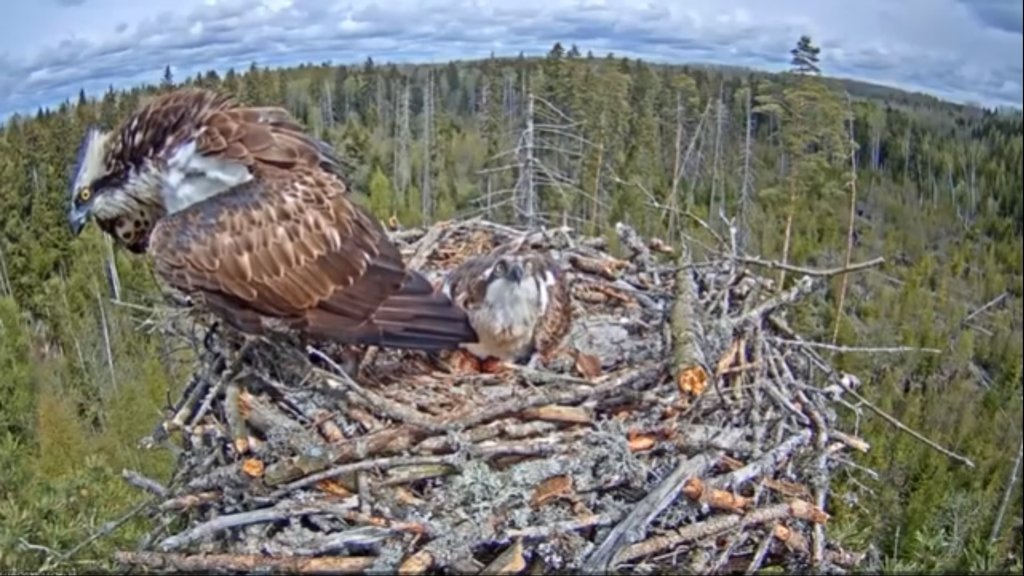 Perhaps it could be some youngster who wondered into Ivo's territory, caught a fish and was chased around by Ivo. In the video the stranger seemed pretty stressed, was a bit "frozen" and didn't move around much at all..
Top

13:55
After the stranger left, Ivo was on guard for a long time.. as Summi wrote, for some 5 hours.
Beautiful, dark blue storm clouds. 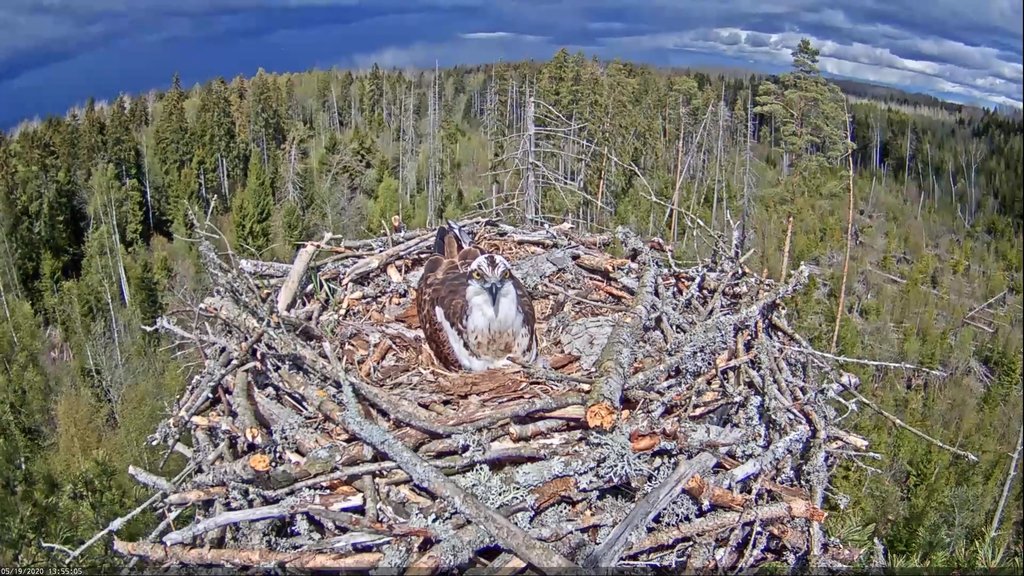 17:21
Iiris finally lands on the nest. She has a small fish tail from her meal. 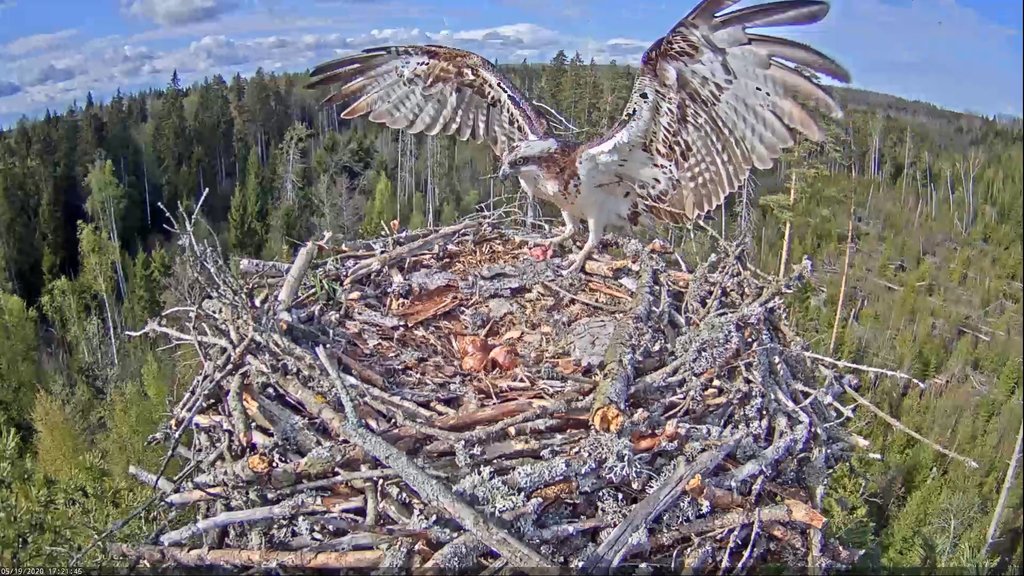 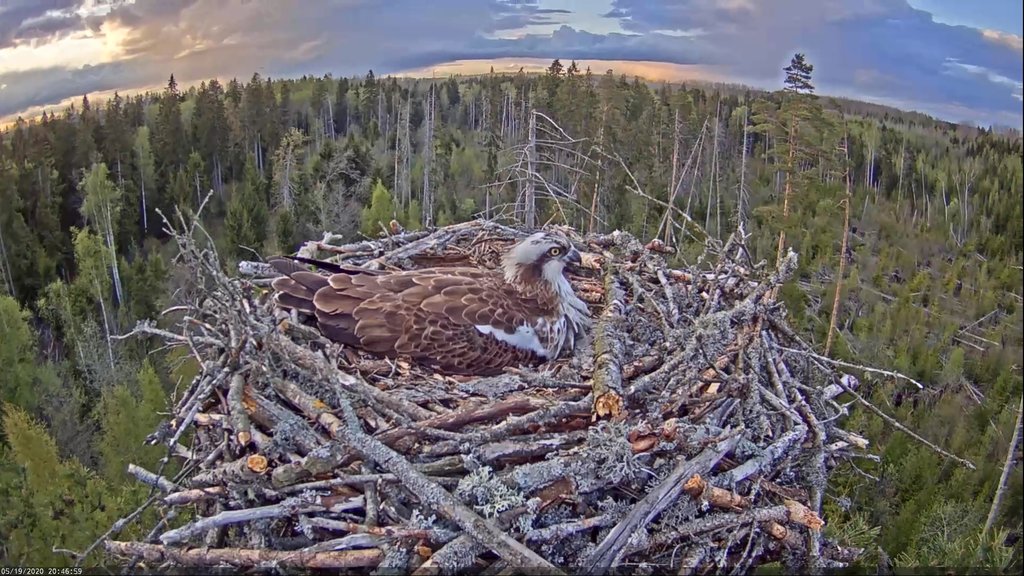 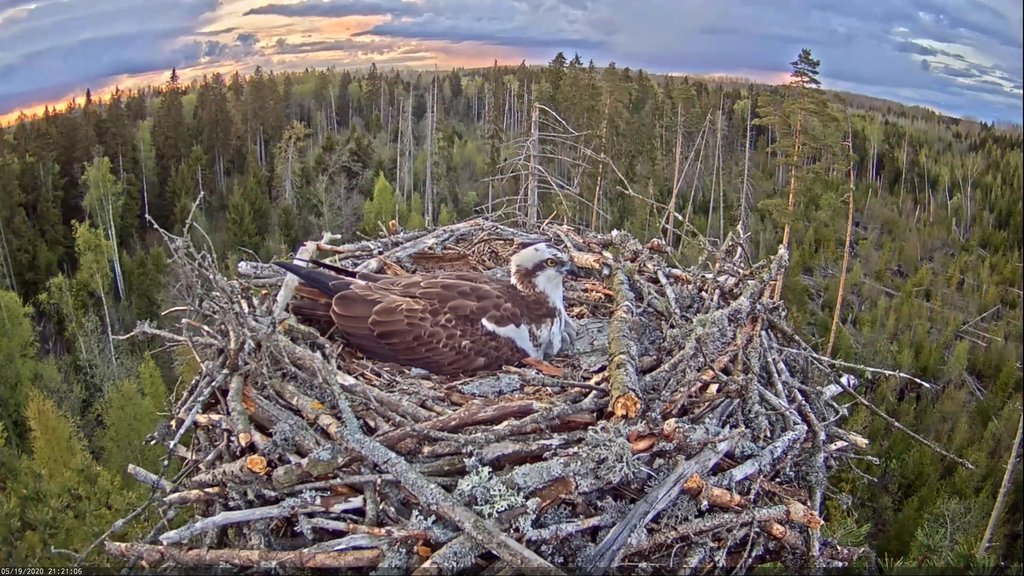 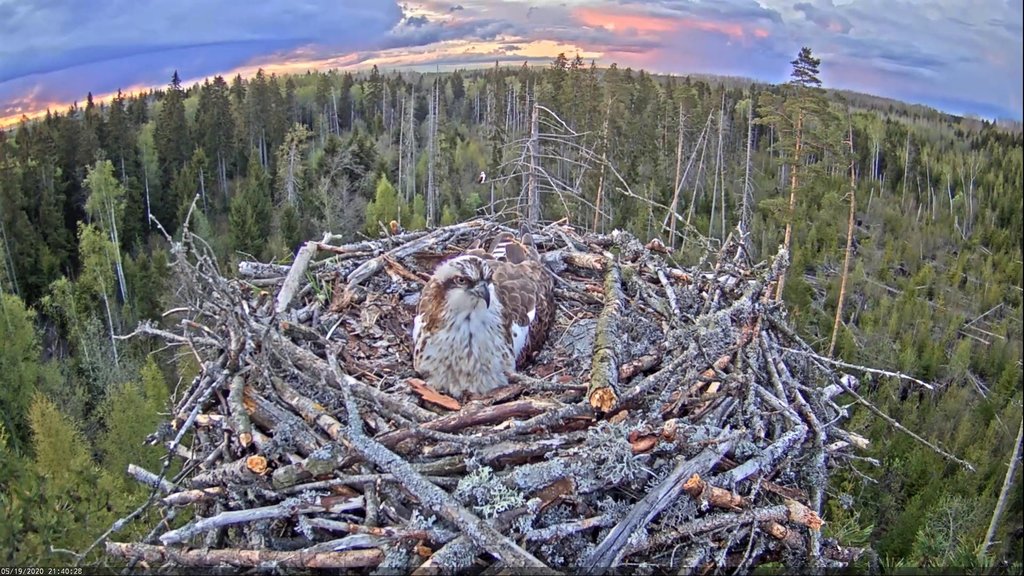 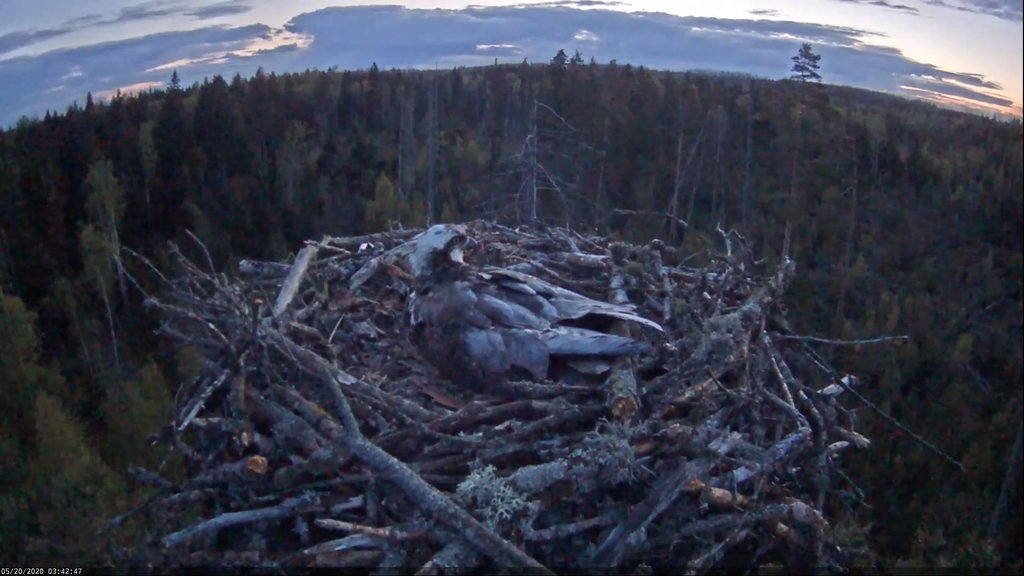 04:19
Iiris's tail feathers are still getting frosty almost every night 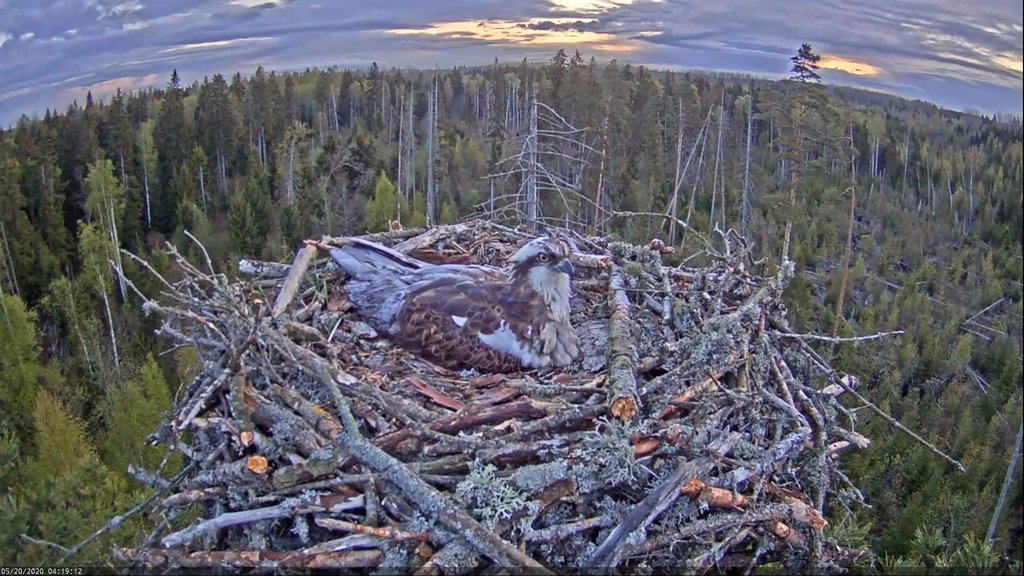 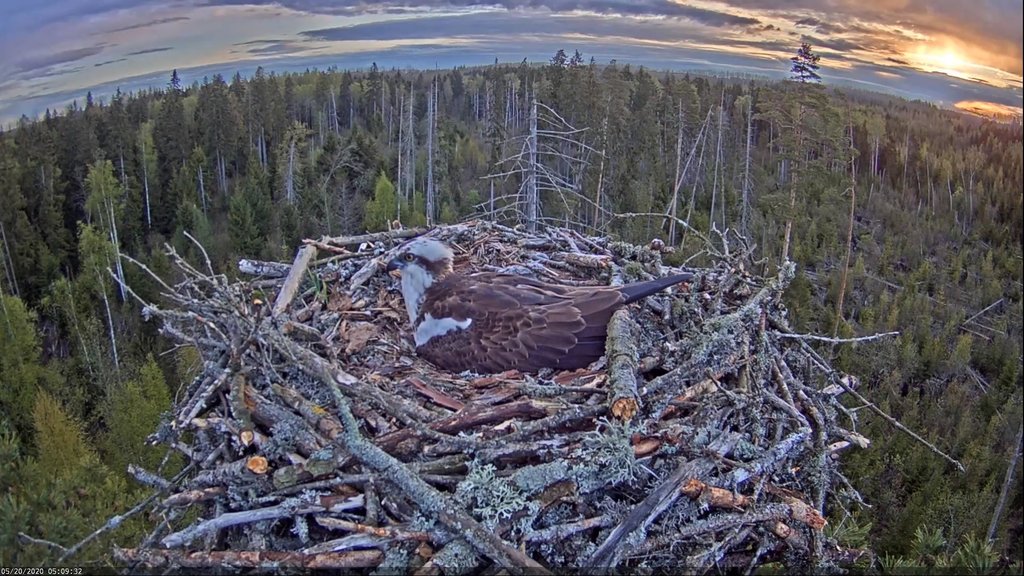 05:59
Iiris returns with a small stick 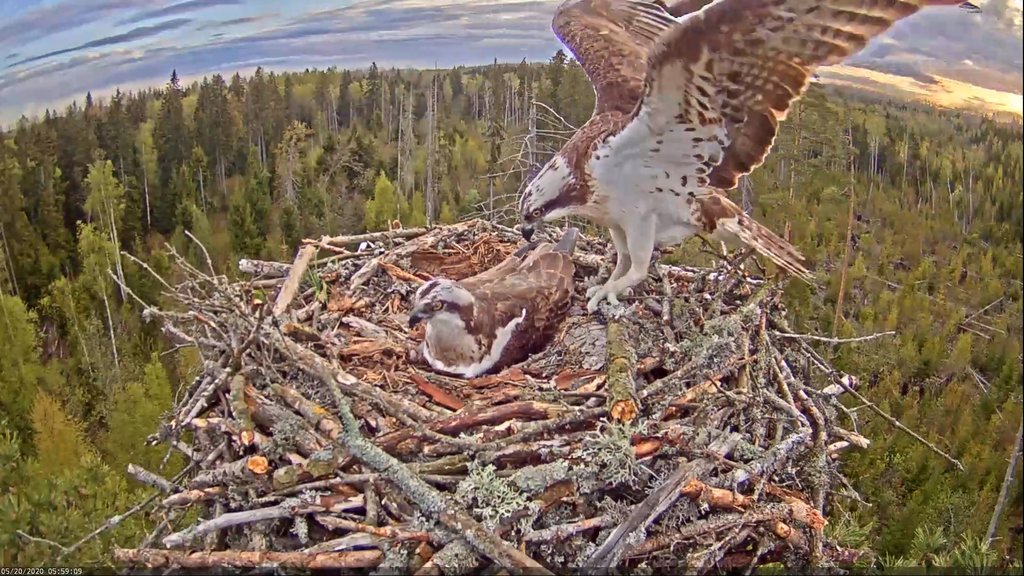 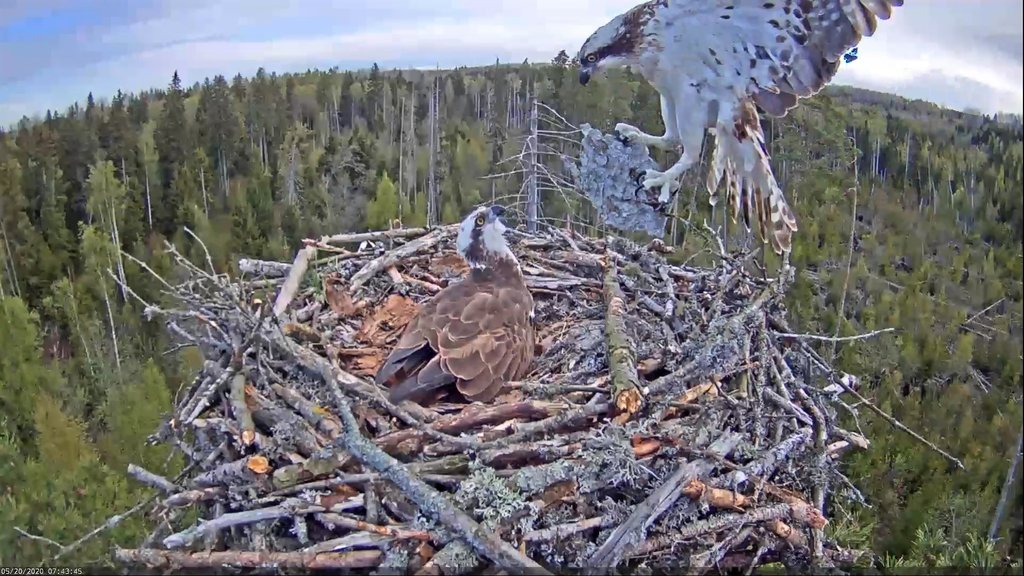 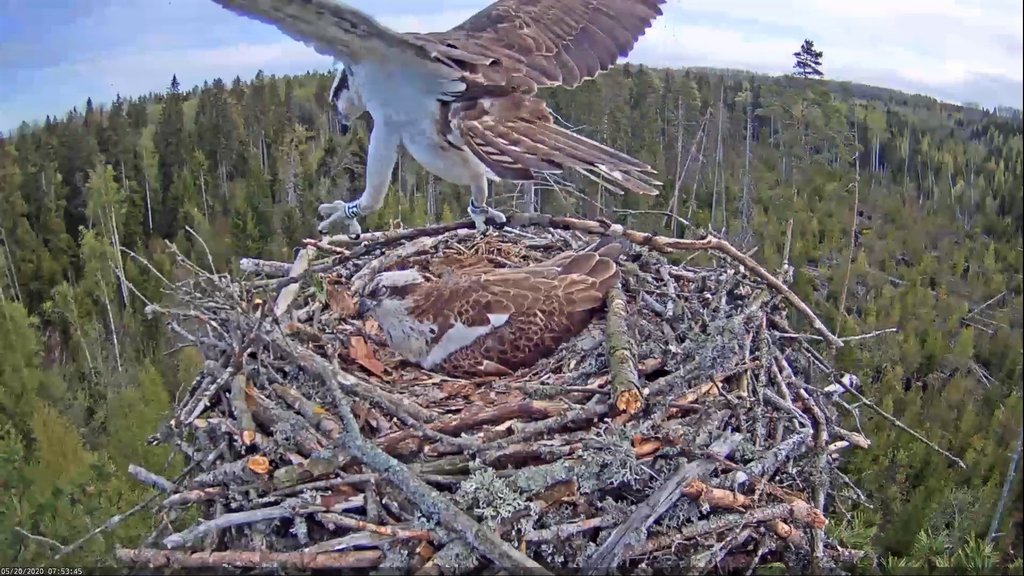 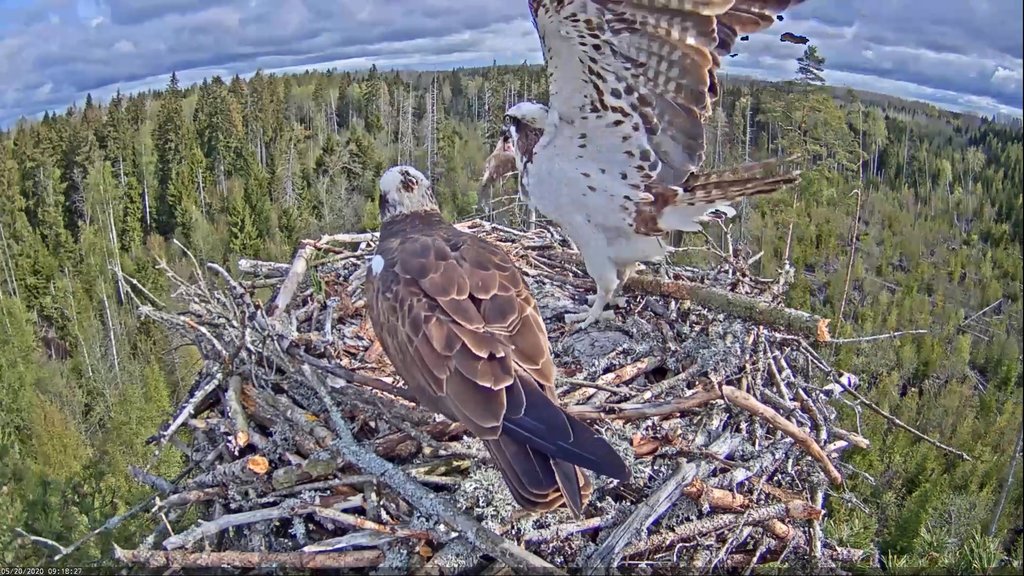 14:35:16 Iiris left suddenly
14:39 It's raining, the eggs are alone, strong wind gusts, the rain stopped
14:40 Iiris on the dead tree, makes some circles and at 14:40.55 comes and sits on the eggs
At the same time Ivo can be seen on the dead tree, obviously they chased some intruder(s) off
Top

16:30 The sky looks like thunderstorm is coming, the wind is becoming stronger.
Ivo is on the nest, hold on!
Top 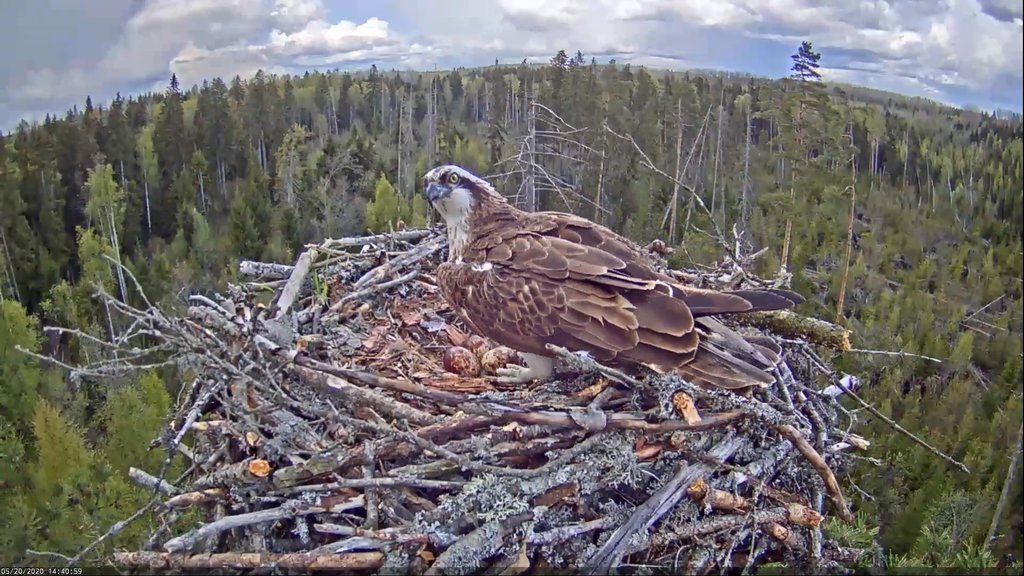 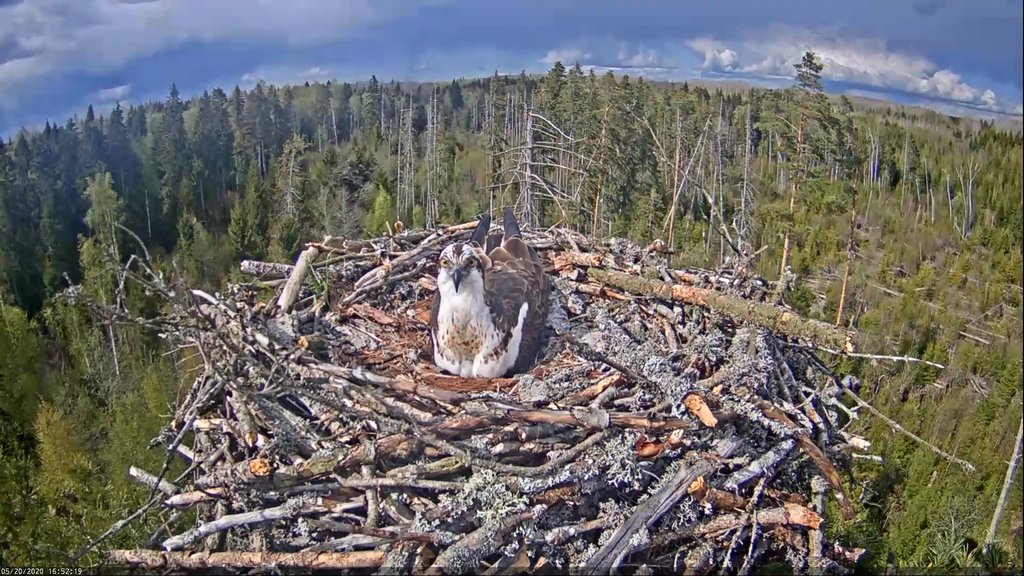 I'm always fascinated by the large branches Ivo and Iiris carrying to the nest. Hopefully the nest won't collapse under that load. Summi, some of your comments are hilarious, laugh .
Top

21:05
Ivo waiting for Iiris to return 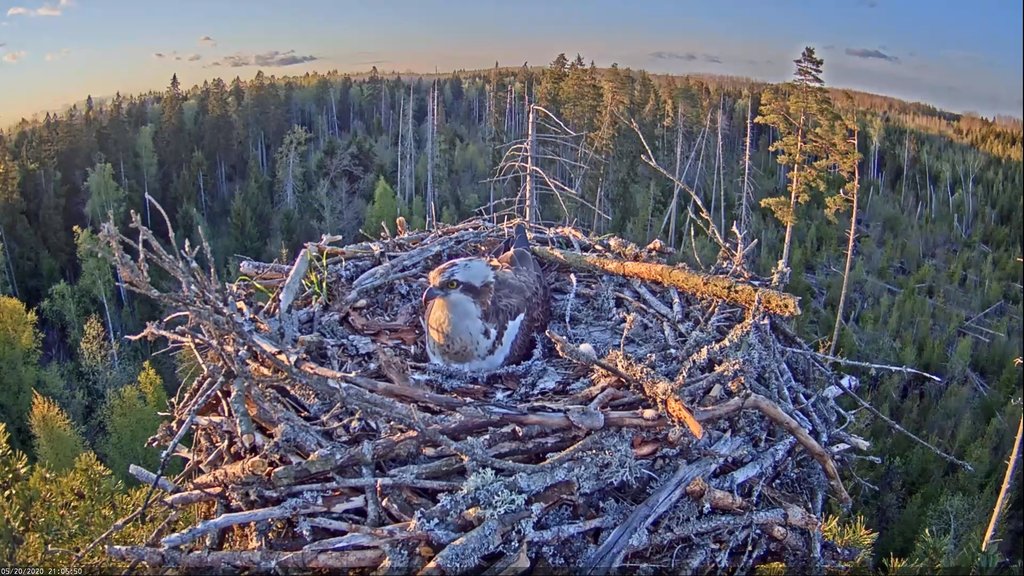 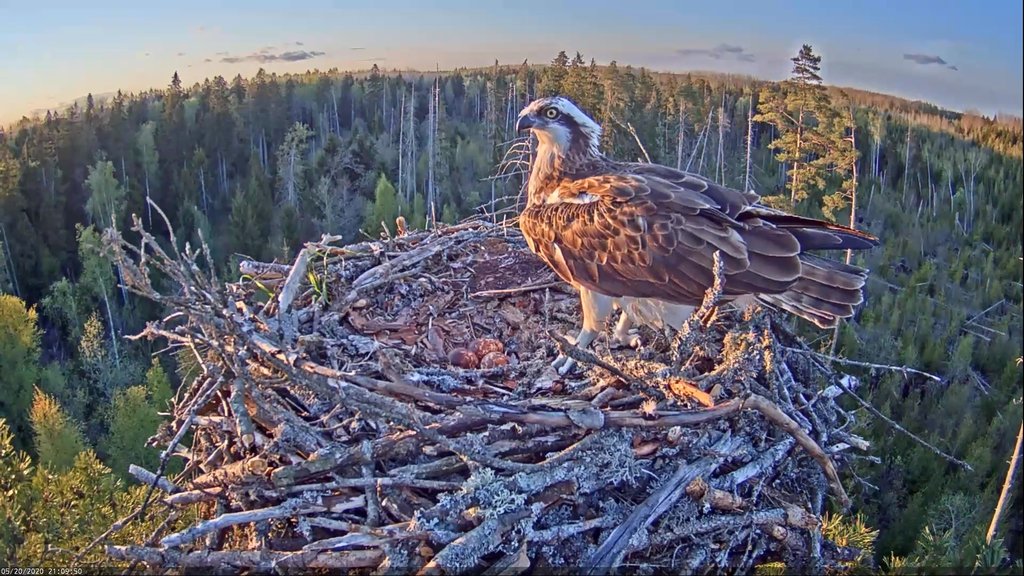 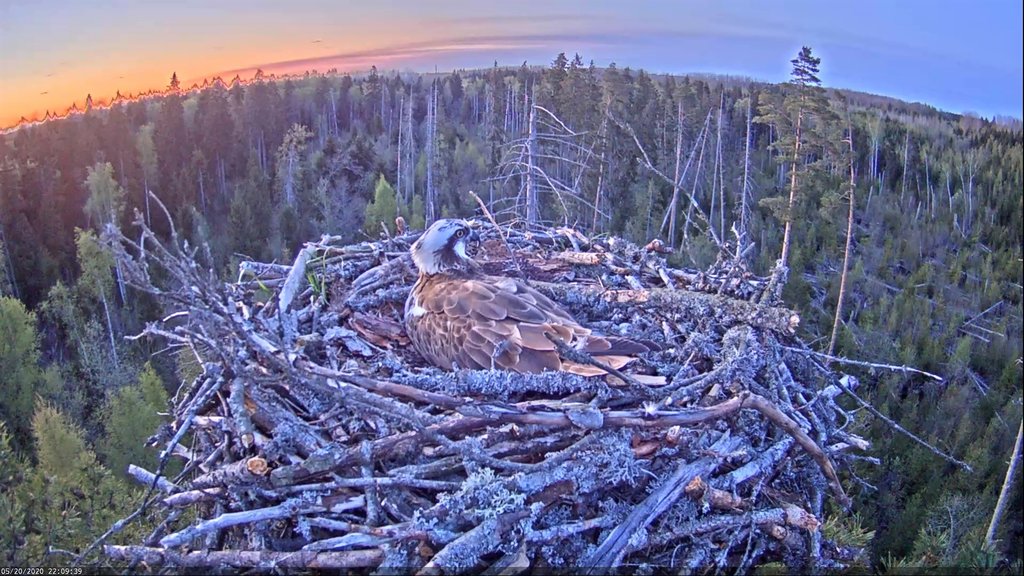 May 21, 2020 - 8:31 Estonia time
Good morning on a windy day with lots of rain.
Raindrops pearl on Iiris plumage. She crouches in the nest. 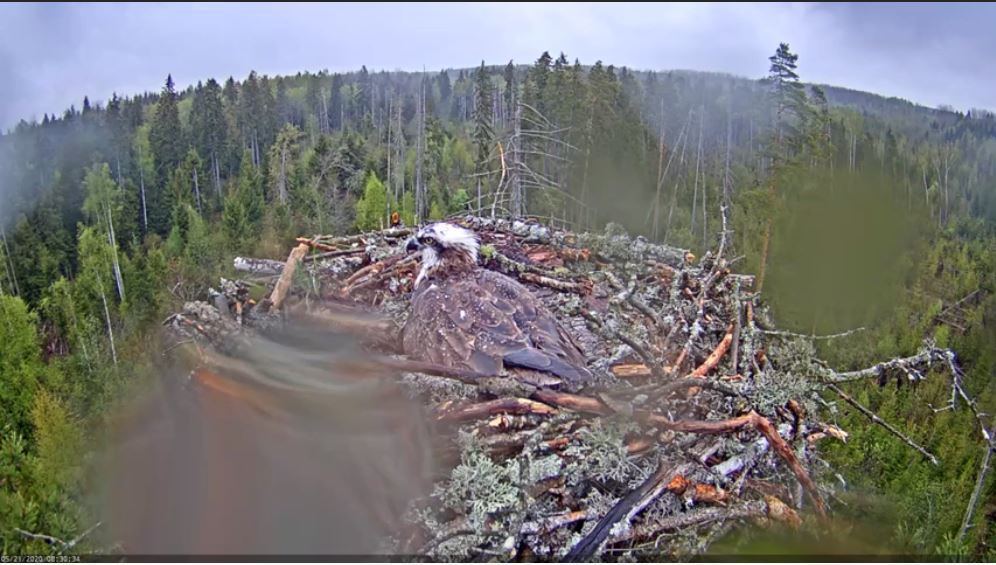