one way and the background trees the other way.!
Mrs Osprey needs lots of moss and greenery in her nestbowl.
Carmel a member of SHOW .. I hope you love birds too. Its economical. It saves going to heaven.
Emily Dickinson
Top

How about introducing the link to the Osprey nest in the archipilago ouside Turku (Åbo) in Finland.

Borje, please post the link to the Finnish camera on this topic
viewtopic.php?f=26&t=107&start=1060

sorry I haven´t much time, then I this time just will tell that both Ospreys were very active in the early afternoon today - 13-14.30 when I had a bit time for looking. Several mating attempts and even a few that looked succesfull. It looked sometimes as if the male (ringed right leg) was excercing landings on the back of the female - and sometimes as if the strong wind did it impossible for him to make a proper mating. Also new nestmaterial was brought to nest.

b.h-p, and thank you for your observations


I think I saw the female overhead (eta - yes, her wing dips down)
Top

8:15 Very loud train whistle heard male is on nest and looks alert!
and then he looks sleepy! Female is still above

do not look constantly, but at this times I saw:

9.37 both in nest preening
9.48 matingattempt
9.50 empty nest
9.55 mating and it looked sucessful few minuts after the nest was empty
10.03 one landed above nest

Oh, one of them is sitting on the nest now .... a very rare view 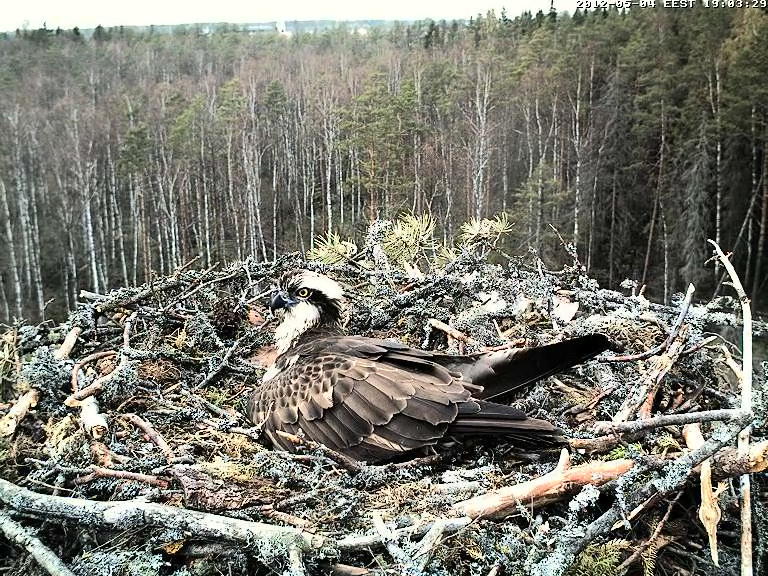 Bea, I was just thinking the same! Maybe finally there will be an egg?

Everything still so new here!
“One can measure the greatness and the moral progress of a nation by looking at how it treats its animals” (Mahatma Gandhi)
"You can judge a man's true character by the way he treats his fellow animals" (Paul McCartney)

But shouldn`t they really going to lay an egg now ..... facing all the matings they did the last days ???
Although some didn´t look very successful .... but there surely were some ....

Venegor,I just saw your pic..live. One osprey flew away just now.
The nest still has an 'unfinished' look.
19:36. Osprey alone.
Carmel a member of SHOW .. I hope you love birds too. Its economical. It saves going to heaven.
Emily Dickinson
Top

I have no idea how the nest should look when "ready", but they don't seem to bring hardly any moss, grass, hay or other "soft" material, mostly bark and lichen.

19:57 Male is back on the nest,moving a stick here and there. Making half-hearted attempts to organise the nest.
F having a stretch and now has flown to the cam housing. CLANG..

8:59
When I opened the camera a ringed osprey was at home. He did some warm up exercises and a halfhearted attempt to work at the nest.
Some minutes later the nest was empty.

14:27 Mating attempt, then the male left the nest

14:30 Male landed again at the nest, maybe with a small prey, I couldn´t see that. Both worked a bit at the nest

It was very windy today. Several times I heard noises which sounded like gunshots.

15:13 I opened the cam; female osprey without rings alone in the nest, preening her feathers
15:20 She´s looking around attentive
15:25 Preening
15:30 Shower of rain
15:34 I heard the first cuckoo this year
15:35 She called, another osprey swooped down on her. This time, unless I´m very much mistaken, it was a mating.
He started straight from her back and disappeard
15:37 The ringed male landet in the nest
15:39 Both preened their feathers
15:40 He is looking around, she is “talking to him” and still preening
15:44 He leaves, she is preening
15:52 Greeting calls from the female – the male landed and brought a huge piece of tree bark.
She started to “shred” it while she was talking all the time
15:56 He left the nest, and she stopped talking and working
16:00 When I closed the cam she was still alone in the nest