Pontu pictures show Madis and Piret on the nest from 4:19AM EEST through 4:40AM EEST July 8th, 2014. I captured many. Madis brought grass to the nest and laid down in the nest bowl. They both looked terrific....

There is nothing in which the birds differ more from man than the way in which they can build and yet leave a landscape as it was before.

It's a pleasant surprise to see Piret and Madis in its nest. Thank You, Kathy1229! What they did at such an early hour? Madis did deepening. Do they Have kids? Many questions... From Pontu 4:34. 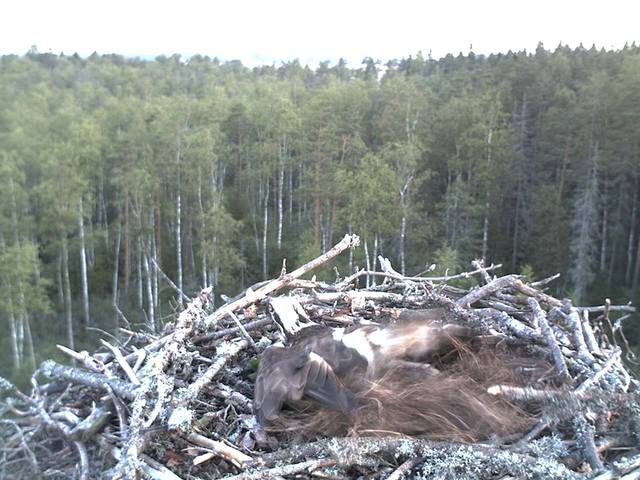 Thanks Katy1229 for reporting. I haven't checked all pictures from the Pontu archive yet, but at 4:20 Madis is alone on the nest again and mantling. I bet there was an intruder around.


Maybe Urmas & friends can give more information about Piret & Madis, as they've been in the area recently to repair the camera.
I am convinced our osprey pair have another nest only a few trees away from this nest, but would like some confirmation.
Top

Kathy1229 wrote:Pontu pictures show Madis and Piret on the nest from 4:19AM EEST through 4:40AM EEST July 8th, 2014. I captured many. Madis brought grass to the nest and laid down in the nest bowl. They both looked terrific....

Kukelke wrote: I am convinced our osprey pair have another nest only a few trees away from this nest, but would like some confirmation.

Care to tell why you doubt this very much?
Top

Not like that Madis and Piret this season have chickens.

@Bea, thanks for the videos, that gives a clearer picture of what actually was going on, instead of still pics once every minute.

With Madis arriving on April 6th, and Piret on April 15th, we can conclude that they don't have chicks this year either. Normally it takes about 2 weeks between arrival of the last mate, and egglaying, then another 5 weeks and a bit 'till hatching. This means if they had chicks, they would have been about a month old now.

I asked the Dyfi Osprey Project people to have a look at the videos, and was told that Madis isn't really submissive, but rather asserting ownership of the nest.

It would be very interesting to get to know a bit more about Madis & Piret. If they indeed have another (frustration-) nest nearby, and if so, if there has been a breeding attempt or not (check the possible (frustration-) nest for eggs/chicks/other indications).

Maybe Urmas & the Eaglemen could provide us with some clues. I would really appreciate that, and I think many more are interested in this too.

Anyway, it is good we got a confirmation that both Piret and Madis are still about and still together. The pair-bonds between these two seem to be very strong.
Top

Kukelke wrote:Care to tell why you doubt this very much?

Just an intuition. And I believe that Piret is unable to lay eggs. Whatever the reason is.
Donation for KOTKAKLUBI
IBAN EE18 2200 2210 4035 9778 - BIC HABAEE2X - Swedbank AS
Wire Transfer via SEPA in EURO Countries
search.php?keywords=villa&terms=all&aut ... mit=Search

Kukelke wrote:...With Madis arriving on April 6th, and Piret on April 15th, we can conclude that they don't have chicks this year either....


Yes, most likely Piret and Madis again childless. Otherwise they would not have come with a control check their nest.
Top

I still love this couple. Queen Piret and Prince Madis. It's nice to see them. Thanks to Urmas & Urmas & Co.
I guess the nest is a meeting point for them when they have not been together for a while. But just a guess.

Another visit to the nest...think it is Madis....he is in the submissive posture...perhaps Piret is on the cam....3:55 AM EEST....still there at 4:04AM EEST....gone @ 4:10AM EEST
There is nothing in which the birds differ more from man than the way in which they can build and yet leave a landscape as it was before.

Gavril wrote: In any case, the contents of the nest is changing. This means that Madis visits the nest and carries in it the construction works....

Luz4711 wrote:Another sign for it that there is no other nest.

Is that so? And how do you know that?

And what are/were the previous signs then?
Top

I believe that Madis and Piret this year there somewhere cozy nest. Linda and Sulev also have several nests, 2 at least. Madis as a good host, it checks its "country house" and holds it some repairs. Anyway nice to think that this lovely couple brings up now three Chicks.
Top

That's what I also think, Gavril. (My questions were merely directed at Luz4711 who commented your observation that the nest was changing by Madis' works)

After all ospreys migrate to Europe for the sole purpose of breeding, and for that they need a nest. It is known that ospreys sometimes abandon their old nest and build a new nest nearby in the same area. One of the reasons why they do this, is a failed breeding attempt, which happened last year after all the stress with Piret and Oxana fighting for the nest.

Anyway, a feasible explanation for what we can see on the nest is no proof that it's really what's going on. As long as nobody takes a look we cannot be sure what's happening. For example, that they show up on their old nest now is no proof that they have not been breeding elsewhere; they may have bred and lost their eggs or chicks due to circumstances that will remain unknown to us.
Top

I think the camera has problems with the batteries and/or solar panels.

The last week or so the cam is only online in the late afternoon and early evening, as if it takes most of the day to recharge the batteries, before the camera can broadcast again.
Top

Kukelke wrote:The last week or so the cam is only online in the late afternoon and early evening, as if it takes most of the day to recharge the batteries, before the camera can broadcast again.

If that were so, that would be a very strange setup. Unless there is some circuitry that switches off the camera for many hours when the battery power is low to give it a chance to recharge, the power from the solar panels is consumed by the camera first and only the rest can be used to recharge the battery.

So Madis was on the nest again this morning, and got company of an unringed female. See documentation topic: viewtopic.php?p=337072#p337072

@Bea, would it be possible for you to make some videos of the visits of Madis and this unringed female this morning?

@Urmas, do you have some more information perhaps, in case you've visited the nest site recently?

The two big questions here are:

1) Where is Piret?
2) Who is this unringed female; someone we know from previous visits or completely new to us?


Time for some speculation then...

1) On the first question where Piret is:

Piret was last seen on the nest at July 8th, together with Madis: viewtopic.php?p=333732#p333732 and further
It could ofcourse be that Piret has visited the nest after that, just that noone noticed it. The camera being on and off all the time doesn't help much either to find out.
Today is July 26th, 18 days later.

- The first option, as far as I can see, is this:
Although still a bit early, but not unheard of, Piret could already have started her autumn migration back to Africa, assuming that Piret & Madis didn't raise a clutch this year either. If the opposite were the case, the chicks would still have needed her attention and care.
Madis, who is still around, increases his chances to breed next season by showing an unknown female his nest(s). Completely normal behaviour.

- The second option is that Piret is still around, but that Madis & Piret are 'divorced'. This happens sometimes when a pair fails to breed. We know that Madis & Piret didn't raise chicks last year, and most likely neither this year.
Also in this case it is completely normal that Madis increases his chances to breed next season by showing an unknown female his nest(s).

- The third option, although not too likely, I think, is that Madis and Piret do have chicks somewhere nearby, and that Piret is on another nest with the chicks. Piret's visit to the old nest on July 8th could then have been a short trip to stretch her wings before returning to the nest with the chicks again.
However, this makes it a bit more unlikely that Madis would show another unknown female his old nest, and Piret might have taken action against this intrusion if she was aware of this.

- The fourth option is the one noone wants to think about, but we can't rule it out either. That is that something bad happened to Piret, and that Madis is a widower...
Again it's completely normal that Madis increases his chances to breed next season by showing an unknown female his nest(s). Life goes on after all.

Over to the second question:

2) who is this unknown female?

- A silly thought perhaps, and very unlikely, but not completely impossible; but could this unringed female be Piret after all? It could be that Piret was trapped again and got her backpack transmitter removed. Maybe also the rings were removed? (Although I see no obvious reasons to remove rings)
Urmas could maybe answer this, so we can rule out this option.

I haven't had time yet to compare pictures. Hopefully I can do this tonight or tomorrow. But anyone feel free to do so. The same for checking the Pontu archive the last days to see if Madis, Piret or other ospreys have visited the nest. Usually unused nests are visited in the morning hours. Feel free to check and let us know. (http://pontu.bl.ee/)

Any opinions, thoughts and supplements about all this are welcome.
Top
Locked
863 posts