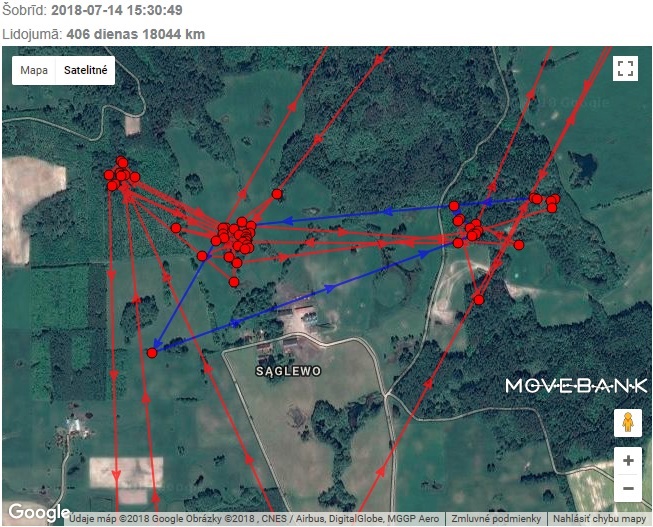 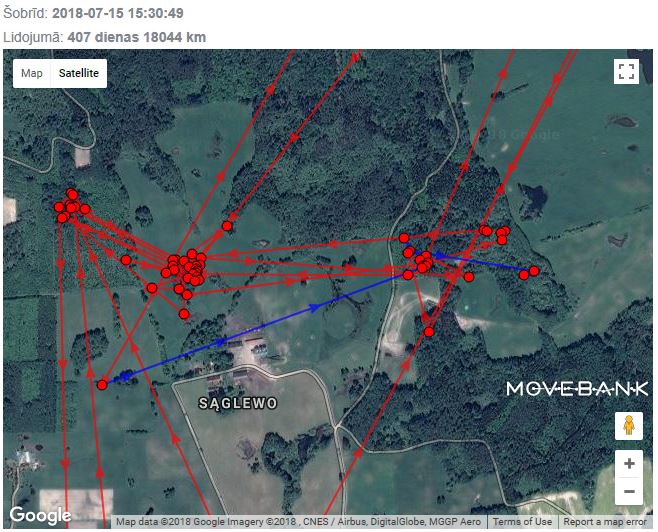 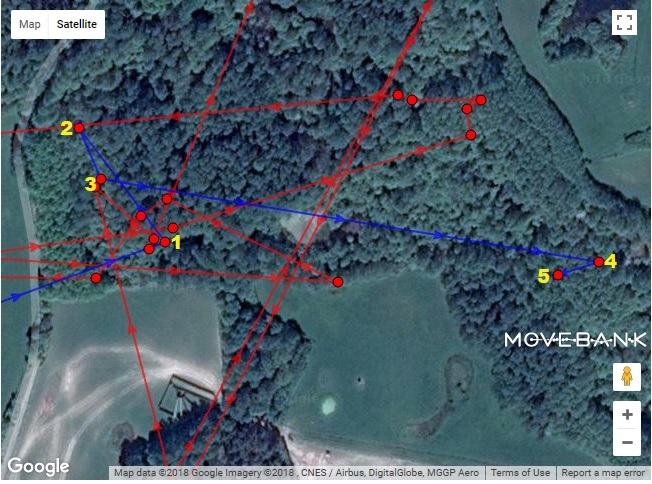 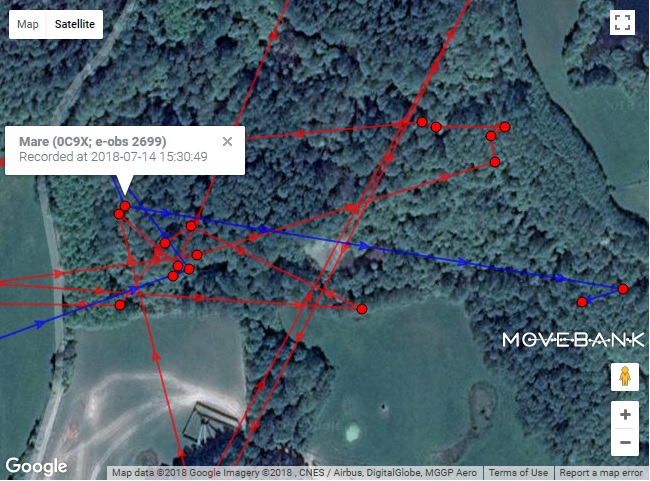 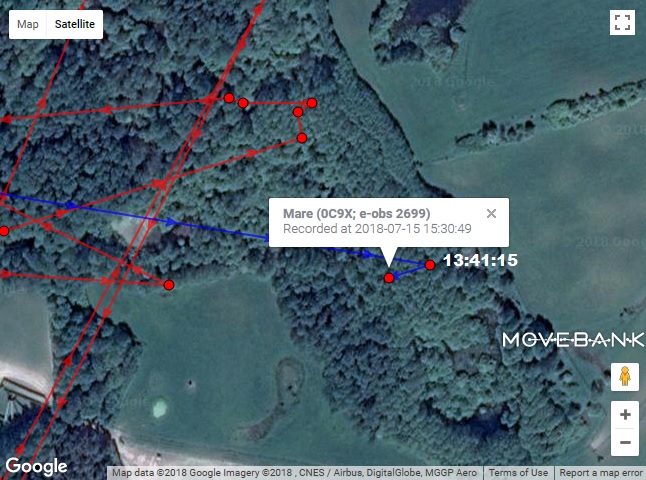 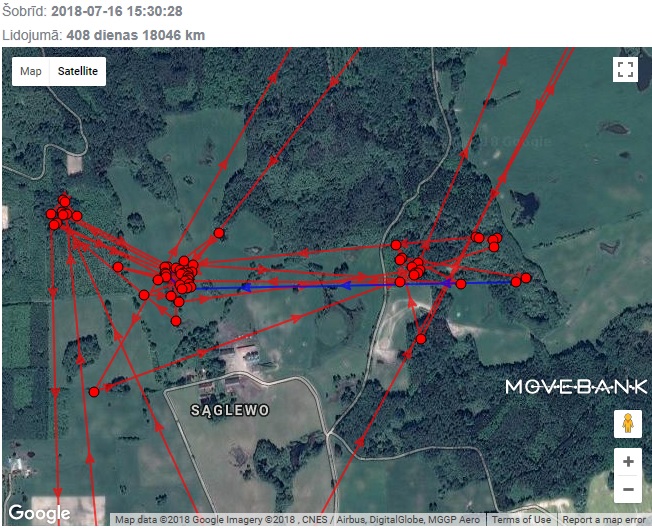 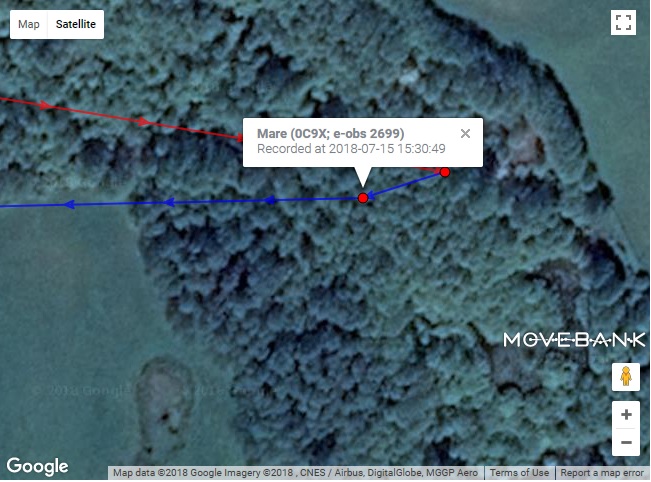 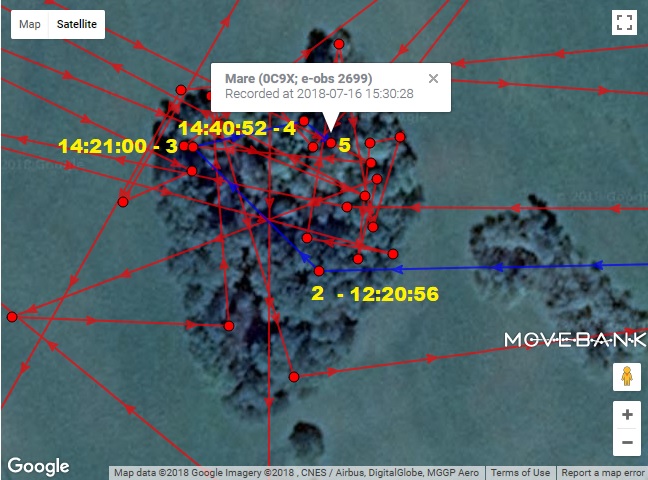 the Data are correct 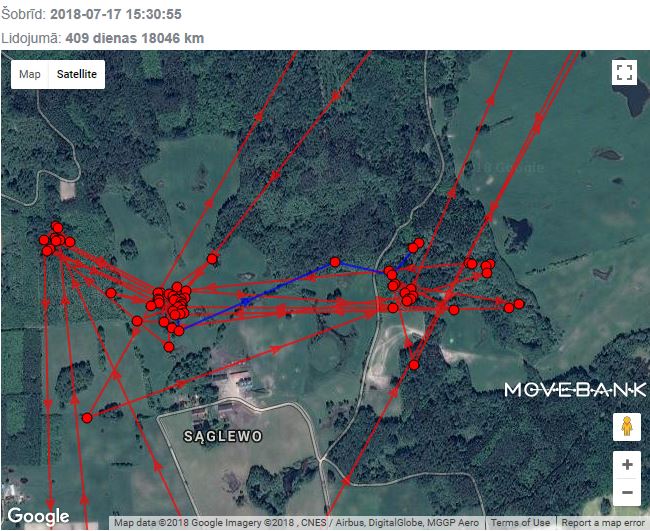 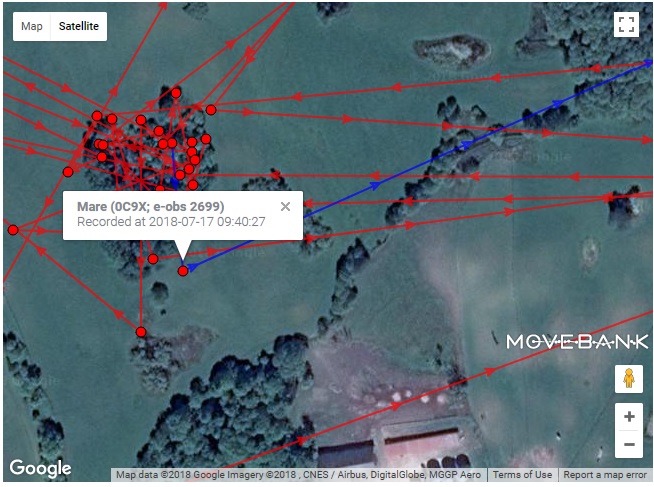 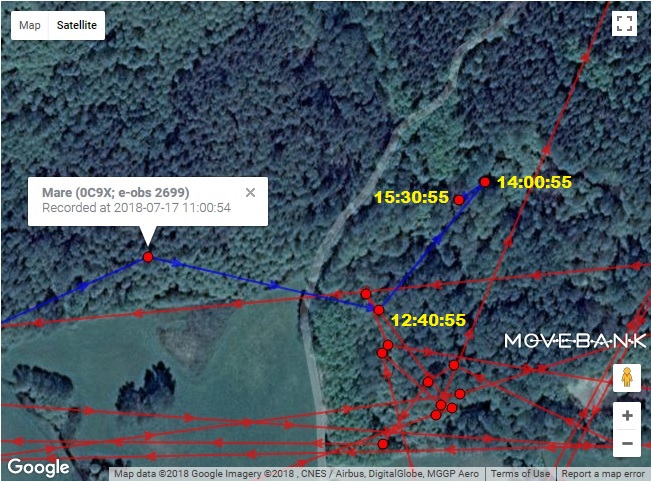 Mare
she is still in the area near village Saglewo 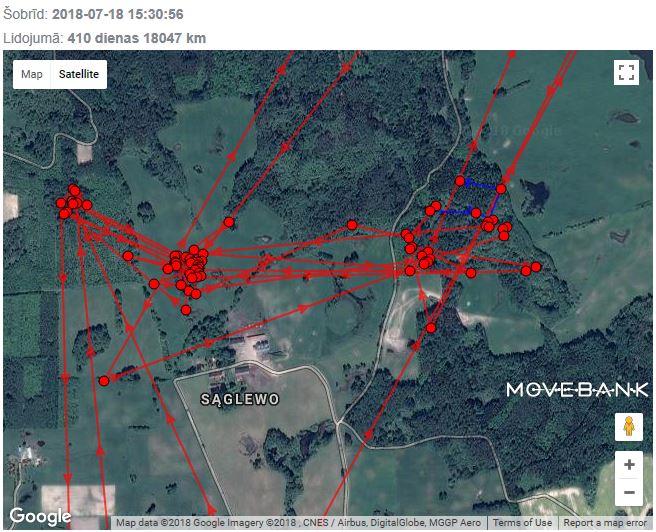 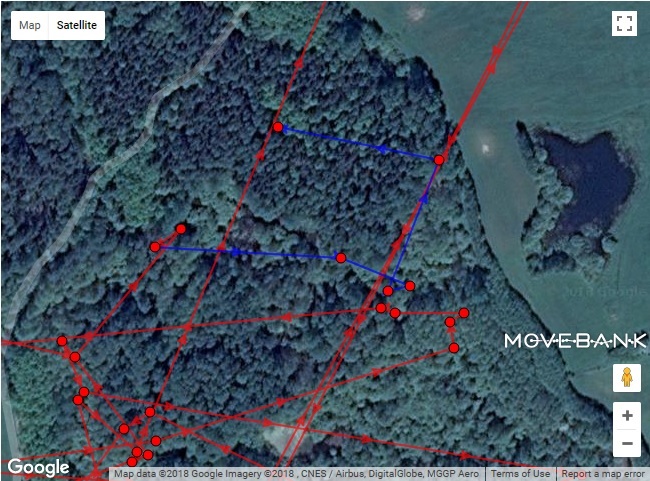 not all Data are correct (today first position? 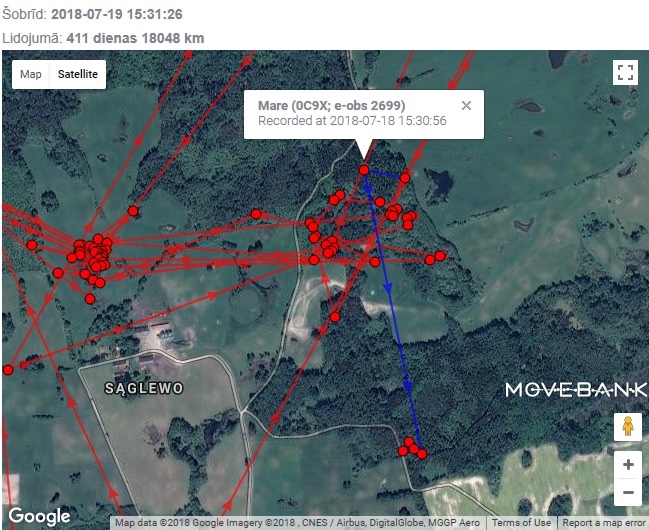 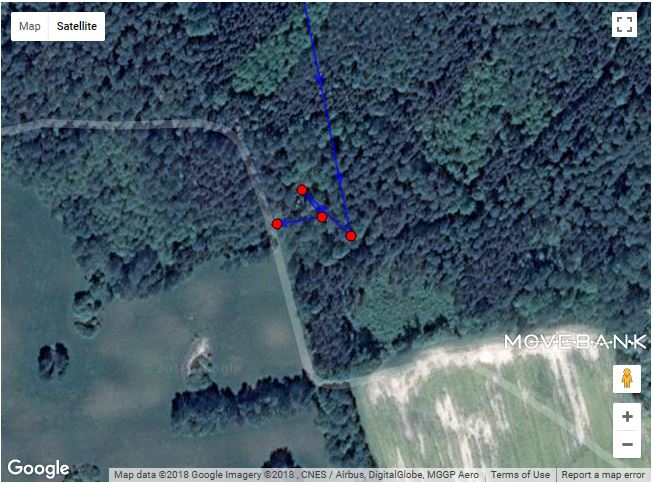 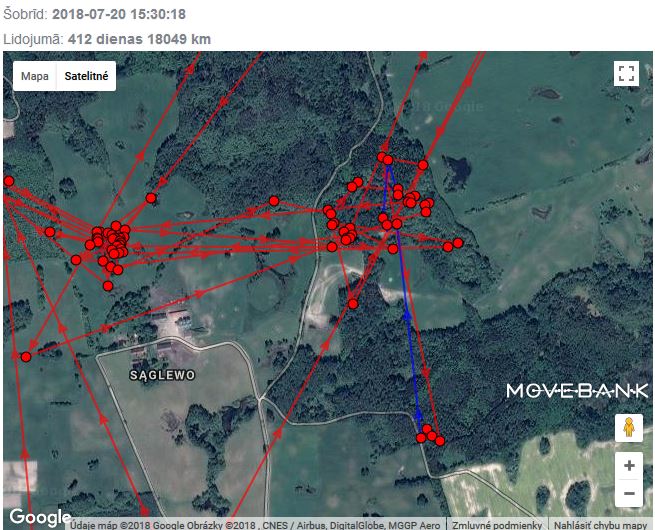 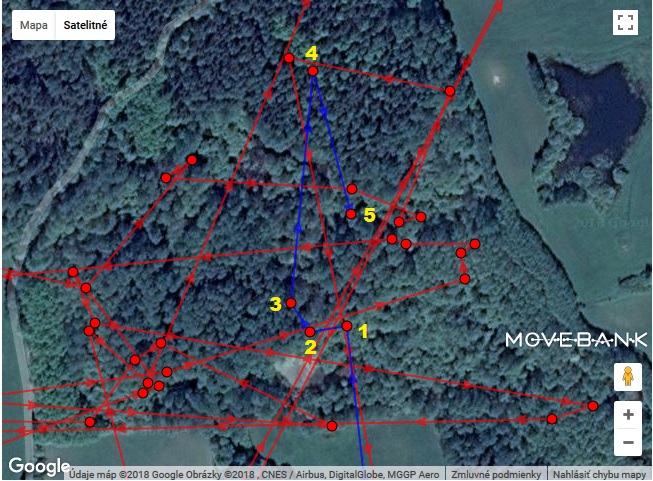 Summi, I have 10 day second vacation (Pause here). Have a nice summer days too

Solo, thanks to your diligence and precision, Mare has great opportunities to meet Maris Strazds or vice versa - we have chance to find out more about her tracks.
The team is in Poland and draw closer to Mare, but Movebank and subsequently goris maps are not working at this moment.

So your images saved the situation

21:34 I have got good news - it is done! Mare`s transmitter data has been downloaded

Let us wait for appearience in map - lines must become more smooth.

thanks a lot for the good news and the pictures in the DD Forum! That's great very very sad news.. unfortunately at July 21 Maris Strazds and Simba found him ded in Poland.. perhaps fox in april catch him..
The place is in pictures https://forums.dabasdati.lv/viewtopic.p ... 07#p194607
Top

Made, thank you.. but this are very bad news

He was a adult breeding stork! Yesterday by combining the Poland trip to Mare place to download data from the transmitter, we also went to Aivo's last known place from where the last transmitter signal arrived in April.

Unfortunately, the story of Aivo has already ended on April 24th - when he returned to Poland from the flight to Latvia, hurrying near Belostock in a swarm of meals, he was probably surprised by fox.

At that moment, when we left and found the last coordinate of Aivo GPS and seeing the surrounding bushes, which only looked nice and beautiful in April, it was actually a great disbelief that nothing could be found anywhere, except for harvest bugs. The first one managed to see the bald bones, where the black feathers also appeared, blended with the color of the earth, but there was no transmitter with those feathers. In the end, looking and combing the bumps and soaking the legs in the muddy water, finally managed to find the second stack of feathers and, with it, the small transmitter box, exactly 24 meters from the point where the last coordinate was in the spring. The transmitter fox most likely on the same day left drowned in water and after the water had dried it was no longer able to work and send coordinates.

The reasons why Aivo decided to turn back in the spring is unlikely to ever be known. But it's possible that one of the reasons might be the drought in the spring, which made Aivo decide better not to go back to his nest in Latvia. Especially considering that at that time the season for the start of the breeding season had already begun to end.

Big trip by Mare. She is in Belarus, on the border with Poland. it is near the river Bug! hello! after the bad news about aivo I would like to ask if someone know something about edi?
Top

Eedi is in Estonia. His transmitter is switched off during the season. When the migration starts, we will be able to see data from him and track his route. as always.

BTW: We have spotted Eedi at the nest of Karl. We could recognize him by his transmitter. It was a great surprise

Mare flew back to Poland

something is wrong with the km I have to take a look at the Movebank
Top

No data is available in the Movebank.

only that.. red point is Mare's location