The blog was finally updated today evening once again.
For October 10 the news are Stork 3 found a sponsor and got a name:

Stork 3 is the first of our three transmitter storks to find a name sponsor: H. R. from Munich. Congratulations!

Ludwig has indeed not sent any data to us for a long time, but since he last reported from Morocco in Africa and in Africa the mobile network is not as well developed as in Europe, there is still hope. It may well be that Ludwig is enjoying his winter quarters and the transmitter just has no reception to send the data. By next spring at the latest, when he returns to Europe, Ludwig's transmitter should report.

Even Ludwig's sister in Spain sends data only sporadically, although the battery is fully charged. Even she has no cell phone reception from time to time.

We still look for a name sponsor for Ludwig's big sister and our eldest, Stork 1.
“One can measure the greatness and the moral progress of a nation by looking at how it treats its animals” (Mahatma Gandhi)
"You can judge a man's true character by the way he treats his fellow animals" (Paul McCartney)

After Ludwig's sister, Stork 2, repeatedly had bad cell phone reception and therefore could not send new data to us, she has once more reported today. And it almost looks like she will fly after all for wintering to Africa, because today she has left the region at the Spanish-Portuguese border, where she stayed already since 9.9.
I am curious if Stork 2 will actually cross the Strait of Gibraltar, or if she just will look for a new place with more food further south in Spain.
“One can measure the greatness and the moral progress of a nation by looking at how it treats its animals” (Mahatma Gandhi)
"You can judge a man's true character by the way he treats his fellow animals" (Paul McCartney) 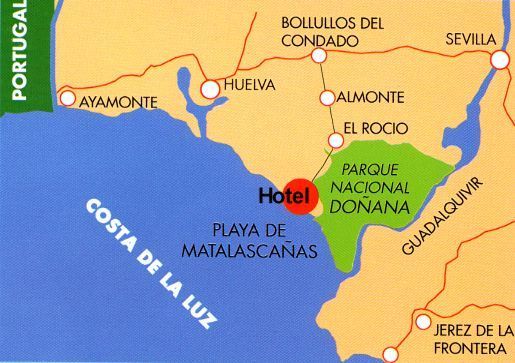 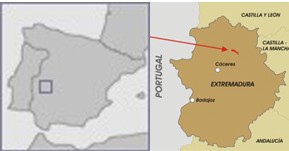 Airras, you are right, Stork 2 is in Doñana National Park at the moment, as a zoom into the map shows 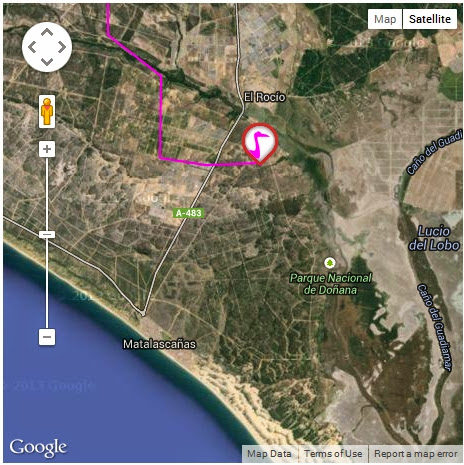 overwinter there many white storks

last year in one of the lagoons of Doñana 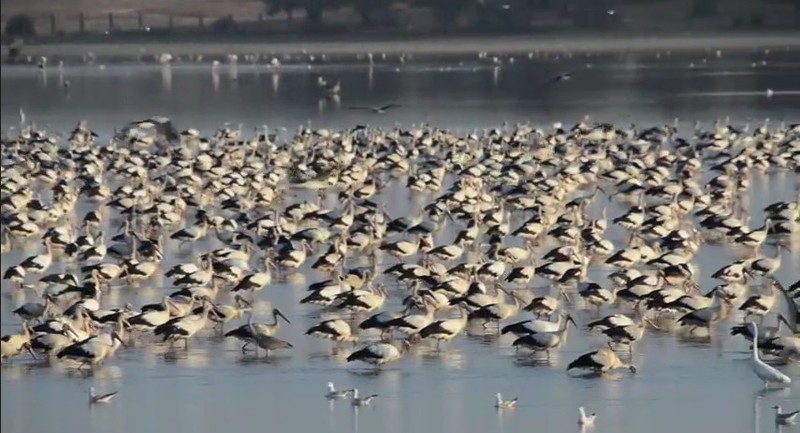 The marshes, wetlands and lots of other habitats in the Doñana National Park, and other similar national parks nearby, are very important areas for migrating and overwintering birds from all over Europe. It's one of the very few last refugees for the threatened Spanish Imperial Eagle too, and also some European ospreys spend the winter here, which was one of the reasons to start an osprey reintroduction programme in areas nearby (Marismas del Odiel Nature Park and Barbate Lake), coordinated by the Doñana Biological Centre. And with pretty good results: the programme started in 2003, and in 2013 (I have no information for 2014 yet) there were 9 breeding pairs which raised 15 chicks to fledging (of a total of 31 since the start of the programme). Some of these breeders are translocated birds, and others are ospreys from elsewhere who decided this is a good spot to breed. So after more than half a century after ospreys went extinct as breeding birds in mainland Spain they are now back and doing well.

Wouldn't that be a nice place to spend the winter for a young Black Stork?

No real news during the last 10 days, the 2 storks already in Africa have apparently not sent any signals, we can only hope that this means they stay in areas without mobile connection.

Stork 2 is still in southern Spain, the map was updated 2 days ago 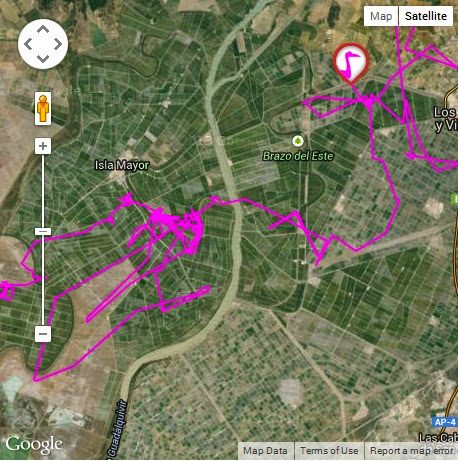 Right now she is spending time near Rio Guadalquivir, 5th longest river in Spain. The map shows lots of small fields, canals and river arms. It looks like a nice place for a stork.
“One can measure the greatness and the moral progress of a nation by looking at how it treats its animals” (Mahatma Gandhi)
"You can judge a man's true character by the way he treats his fellow animals" (Paul McCartney)

Thanks for the news of the two Black Storks.
Perhaps we can ask Birgit to look out for No 2 as she does a lot of photography in that area

After a quite long time there are some news in the Black Stork blog. The stork wintering in Spain has been seen and photographed.

Finally there are news again! Ludwig's sister, Stork 2 was spotted at her wintering area in southern Spain near Sevilla. She's not alone there, but in a big group together with other birds of different species.
Nature photographer Angel Sánchez has observed Stork 2 foraging at an irrigation canal east of the Doñana National Park. Besides 22 other Black Storks, the group also consisted of 150 White Storks, 21 Night Herons, 21 Little Egrets, 12 Great White Egrets, 5 Squacco Herons, more than 10.000 Glossy Ibises, many Purple Gallinules, Cormorants, as well as thousands of Lesser Black Backed- and Black-headed Gulls.
In the evening the group retired to the surrounding stubble fields to spend the night there.
In such a group, our inexperienced young stork is in good hands and most of all can learn from the older Black Storks. Should the food there run low, the experienced Black Storks certainly know from previous years where to find other good sources of food. 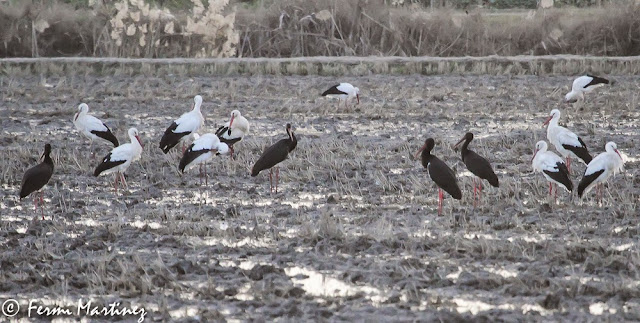 Group of Black and White Storks with whom Stork 2 winters (Photo: F. Martinez) 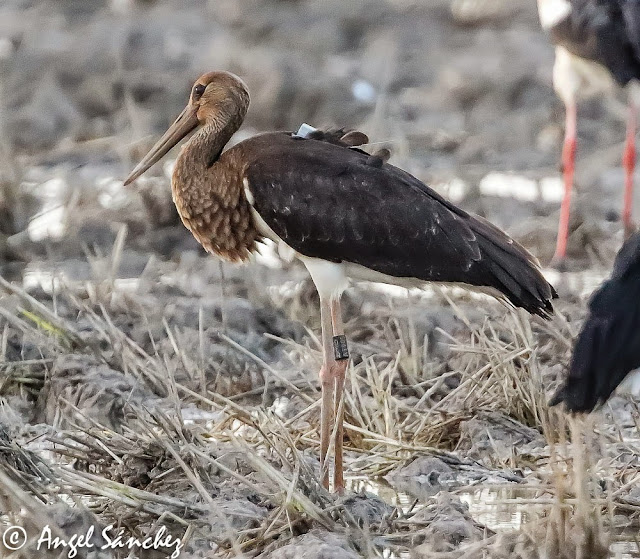 Stork 2 in southern Spain (Photo: A. Sánchez)
“One can measure the greatness and the moral progress of a nation by looking at how it treats its animals” (Mahatma Gandhi)
"You can judge a man's true character by the way he treats his fellow animals" (Paul McCartney)

News from Ludwig's older sister, Stork 2, who was in Spain:

After Stork 2 spent more than 9 weeks near Sevilla in southern Spain, she made a move towards Tarifa. The city at the southernmost point of Spain is the last spot on continental Europe for many migrating birds, from where they cross the Strait of Gibraltar towards Morocco.
Since 21.12., she's stopping northeast of harbour city Barbate and forages on fields along irrigation canals.
Let's see how long she will stay there and if she will fly to Africa still in this year. 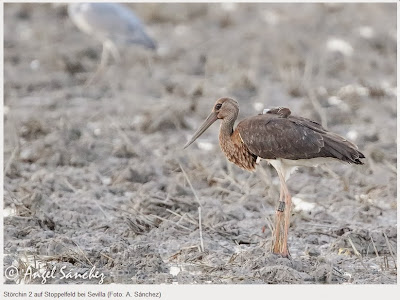 Stork 2 on a stubble field near Sevilla (Photo: A. Sánchez) 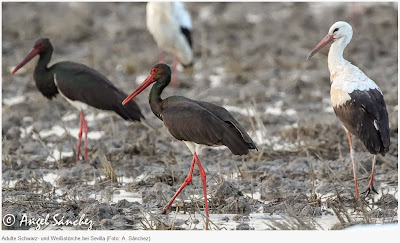 Adult Black and White Storks near Sevilla (Photo: A. Sánchez)
“One can measure the greatness and the moral progress of a nation by looking at how it treats its animals” (Mahatma Gandhi)
"You can judge a man's true character by the way he treats his fellow animals" (Paul McCartney)

Now Stork 2 in fact left Europe and migrated to Africa! Today her satellite transmitter sent an SMS with 5 coordinates from Morocco, north of the city of "Fes".
Whenever the transmitter can't find an adequate mobile network with Internet option, the intelligent device will send an SMS with the last 5 coordinates of the animal. Like this we know also in the case of a poorer network, where our transmitter stork is currently located.
On the basis of the data it can be discerned that Stork 2 was still in rapid flight, when the transmitter sent the coordinates. This means she flies further south.
I hope very much that Stork 2 will, unlike her brother Ludwig, after successfully crossing the Sahara, send again data to us. I wish her all the best!! You will make it! 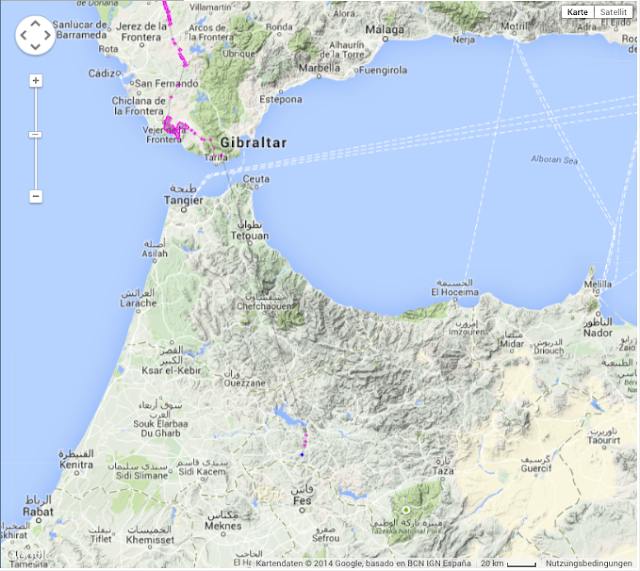 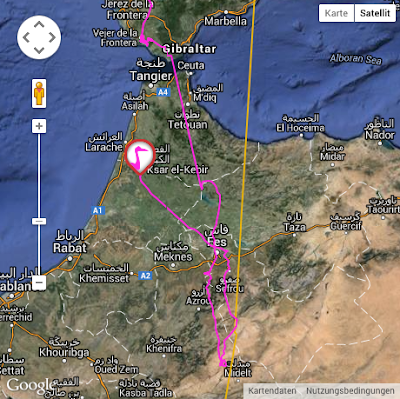 After Stork 2 crossed the Strait of Gibraltar, I thought she would singlemindedly cross the Sahara towards the Sahel. Because the typical wintering areas of Black Storks are south of the Sahel (e. g. Senegal or Burkina Faso).

But Stork 2 apparently did not like the desert, so she turned around north of the city of Zaida in Morocoo, and flew back to the north of Morocco. Today she reported from a plantation between the two villages of Arbaoua and Karia Benaouda, where she apparently found food in an irrigation canal or river.
“One can measure the greatness and the moral progress of a nation by looking at how it treats its animals” (Mahatma Gandhi)
"You can judge a man's true character by the way he treats his fellow animals" (Paul McCartney)

No news at the moment. Ludwig and Stork 1 have not sent any data since September, and Stork 2 seems to like it in the northern part of Morocco, where she is moving around since she turned around. 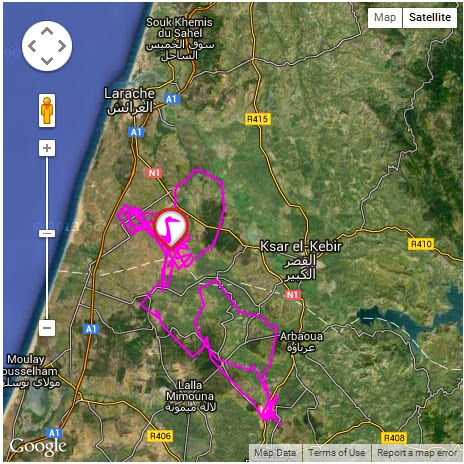 She last reported on 18.01.2015 from south of Ezzouada, Morocco, where she has been staying since the turn of the year. After that there was not even a SMS with a few coordinates with which one could have determined where she went off to.

As Stork 2 has been missing only for a bit more than 2 weeks, I still hope that she will report again soon!

I hope so too, and I hope Ludwig and Stork 1 will send data again too ...
“One can measure the greatness and the moral progress of a nation by looking at how it treats its animals” (Mahatma Gandhi)
"You can judge a man's true character by the way he treats his fellow animals" (Paul McCartney)

The news are still not good for the young Black Storks

By now it is already more than 6 weeks that the last of our transmitter black storks reported. This unfortunately means nothing good ...

Admittedly it is theoretically still possible, that the young Black Storks in Africa "hide" in an area without reception, but the probability is very small.

Now we have to wait until April or latest May, because by then our storks should fly back north and automatically return to areas with mobile phone network.

I immediately let you know if one of the storks should report back.
“One can measure the greatness and the moral progress of a nation by looking at how it treats its animals” (Mahatma Gandhi)
"You can judge a man's true character by the way he treats his fellow animals" (Paul McCartney)