Karl's family takes their time at the feeding grounds in Europe. 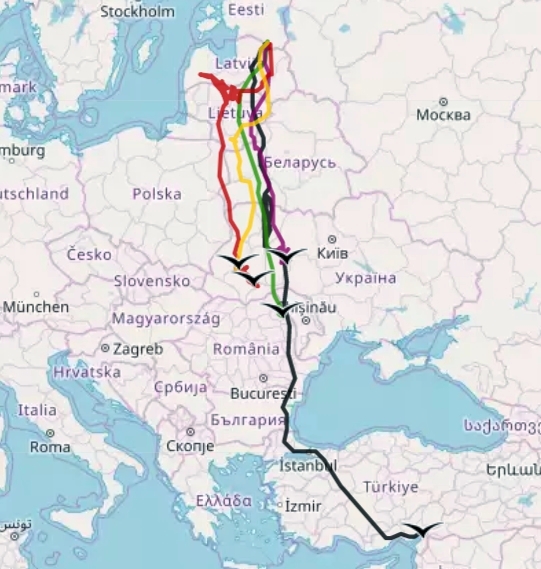 Eedi for comparison is already flew 3837 km 17th on September. He is already in southern Turkey.

@Anne7 I can see Karl very clearly in the last photo. He hides in the trees.

Sure, he's there!
And if you look very closely, you'll see that he smiles at us.

I have the feeling that it is good that they are not in a hurry.

Let the youngsters gain experience and agility (and eat well!) before they start the most difficult part of their journey through Turkey, Syria, Lebanon and Africa...


For all bird-lovers: I found this beautiful six-part BBC documentary series.
You see the world through the eyes of (migrating) birds, taking flight across six continents. Nearly 6 hours of marvel!

Episode 1 - North America
A flock of snow geese flies north and is hunted by bald eagles. Pelicans are shown gliding under the Golden Gate Bridge.

Episode 2 - Africa
Fly over Africa on the back of a vulture and see the most animal-packed continent with fresh eyes. Arrow-dive with cape gannets among sharks, dolphins and whales as they join the great sardine run.

Episode 3 - Europe
White storks leave Africa and struggle to reach Istanbul, the gateway to Europe, while cranes take an easier route over the monkey-guarded Rock of Gibraltar.

Episode 4 - South America
Condors soar along the Andes, scarlet macaws explore the heart of the Amazon and hummingbirds and vultures see the continent's greatest sights.

Episode 6 - Flying High
To fly like a bird, Earthflight not only captured remarkable images of wild flocks but also relied on some extraordinary relationships between people and birds.
“Clearly, animals know more than we think, and think a great deal more than we know.”
— Irene Pepperberg
Top

Thank you for the link @ Anne7 beautiful documentation

Hello everybody! I am passionate about your comments and follow-ups on migration maps. I wanted to greet you for this very interesting work. Thank you to all of you!

A very great and beautiful migration-link, many many thanks!!!
I wonder if Karl and Kati have told their youngsters of the future sea crossing or something like that,
so they would know what's still ahead?

By the way… Anne7 wrote » September 16th, 2018, 6:11 pm :
"Actually, I really wish that more people would actively participate in documenting these journeys."
So, where is UteL hiding?

Wouldn't also she be a good help in documenting and updatings?

Thanks, Swenja
Good morning, everyone!

Today's overview of the Estonian BS 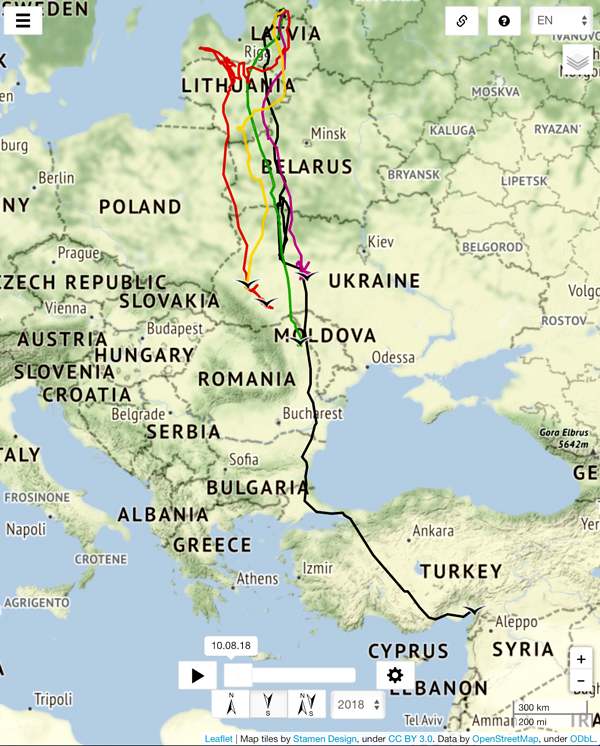 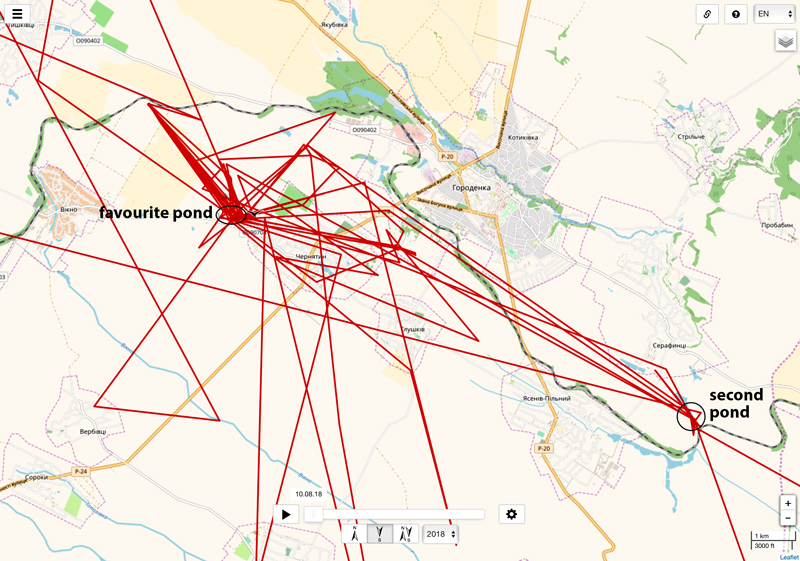 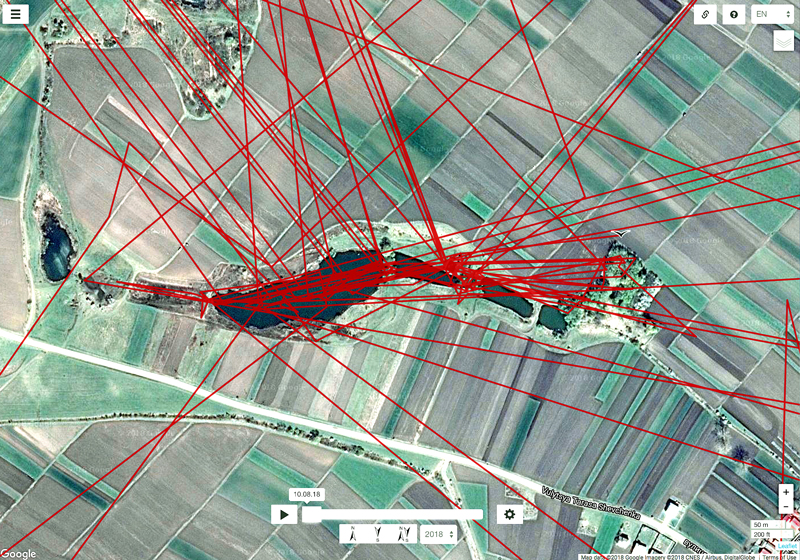 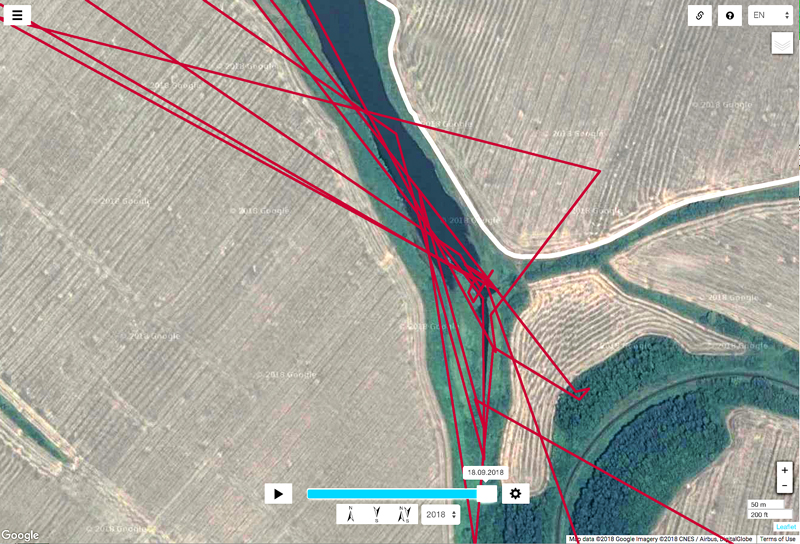 Päike first made a trip northwards and then she/he turned back southwards. 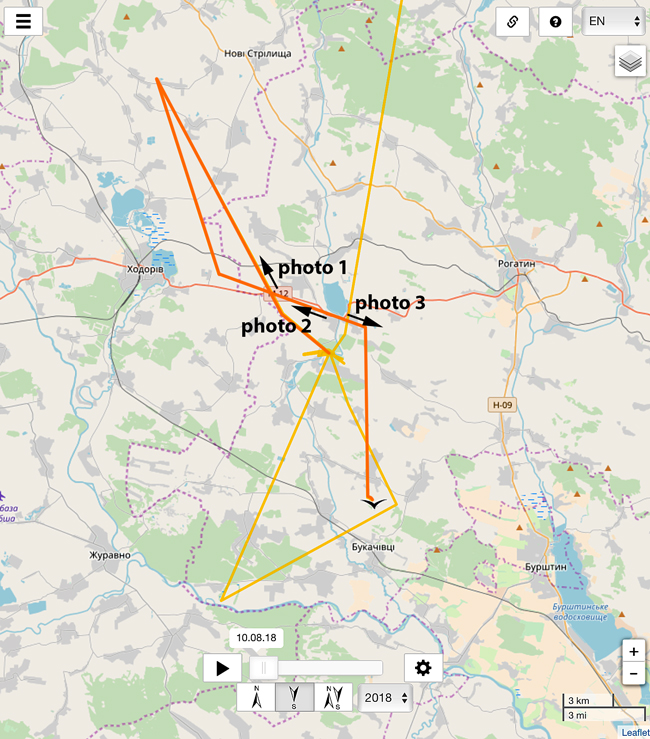 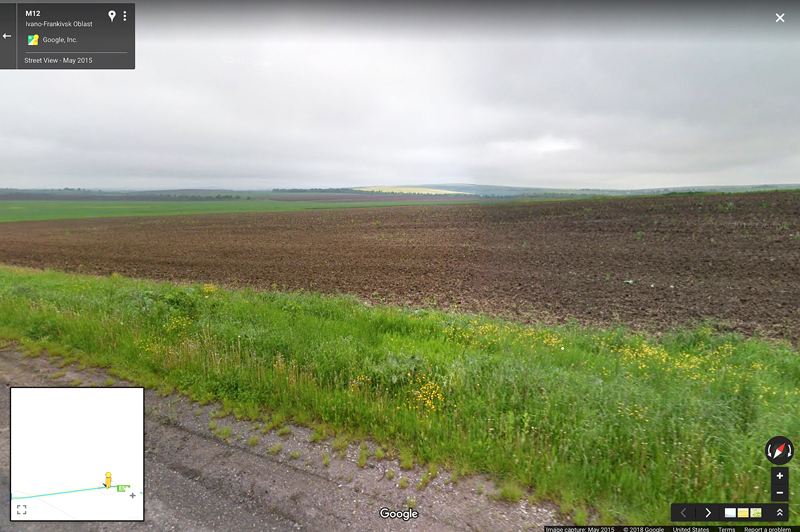 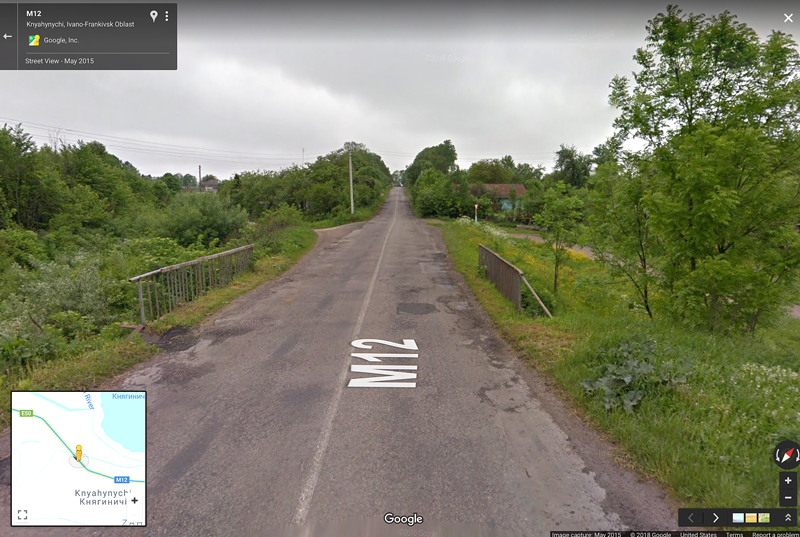 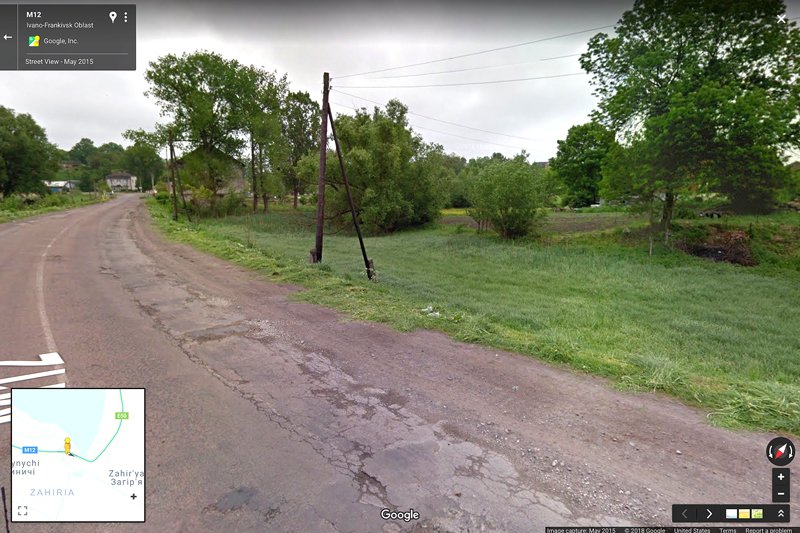 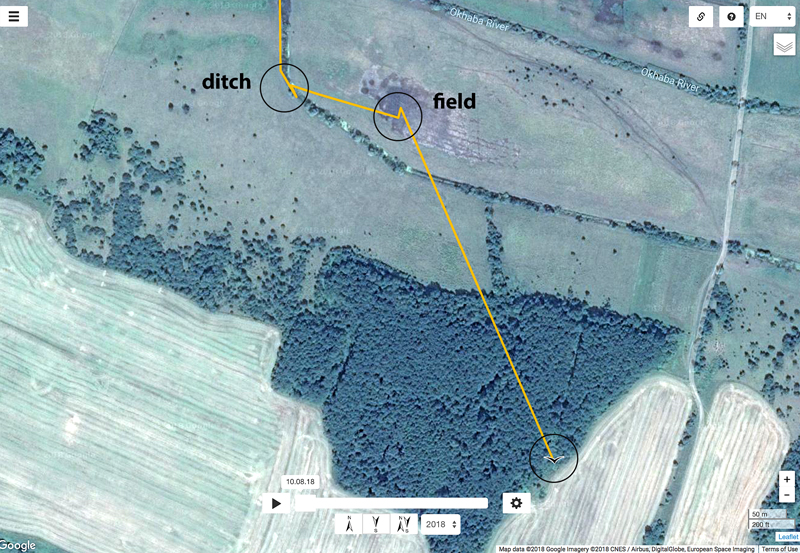 I wonder if Päike is continuing its journey.
“Clearly, animals know more than we think, and think a great deal more than we know.”
— Irene Pepperberg
Top

Karula made a trip, too. 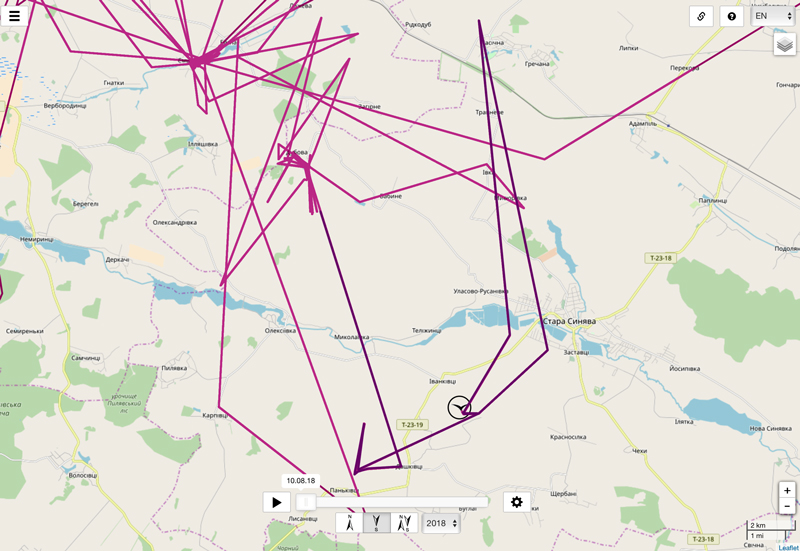 First southwards to a pond in Pan'kivtsi, and a little forest to spend the night 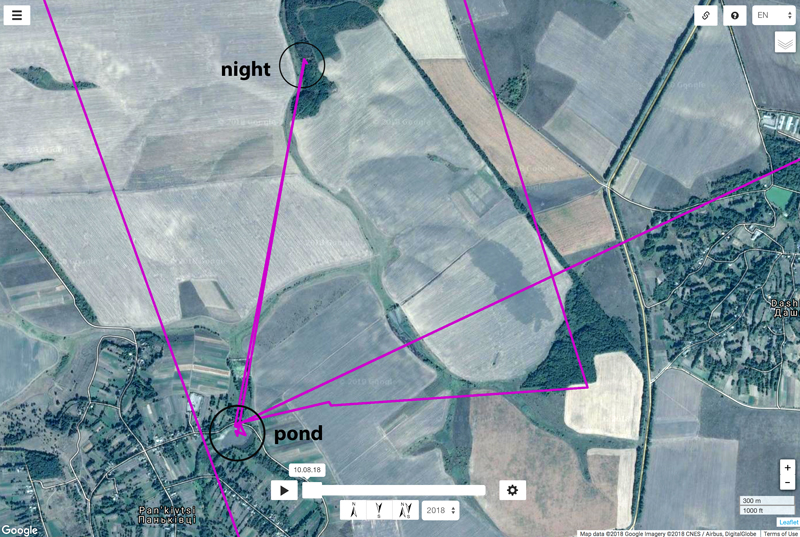 Then, via a small pond near Ivankivtsi, northwards to a field in Pasichna 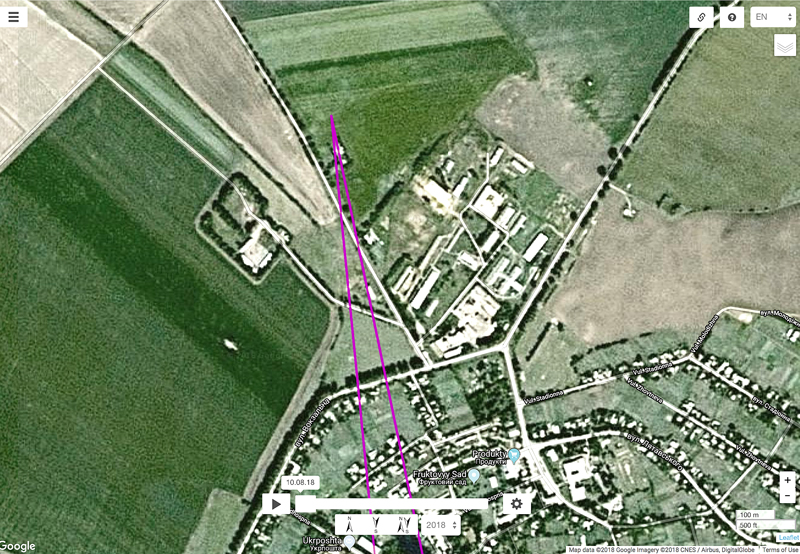 Then, back southwards, to the same small pond (and a field) near Khytir Dashkivskyi.
Searching for food. 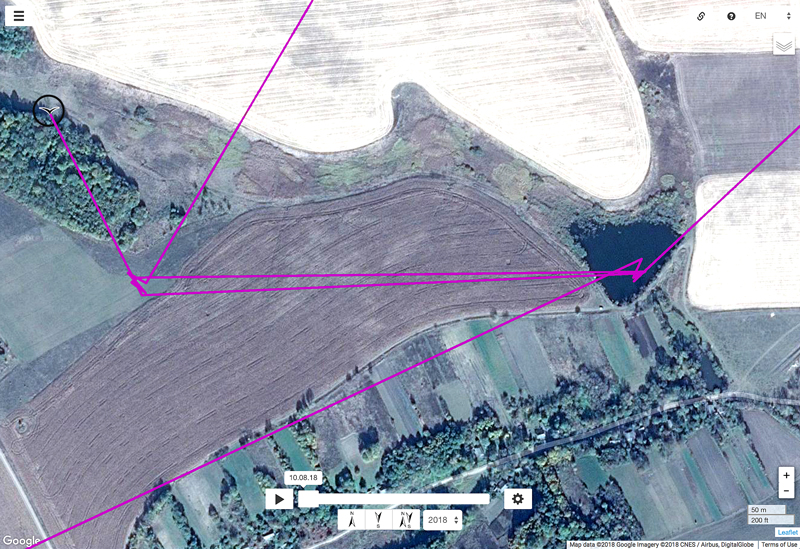 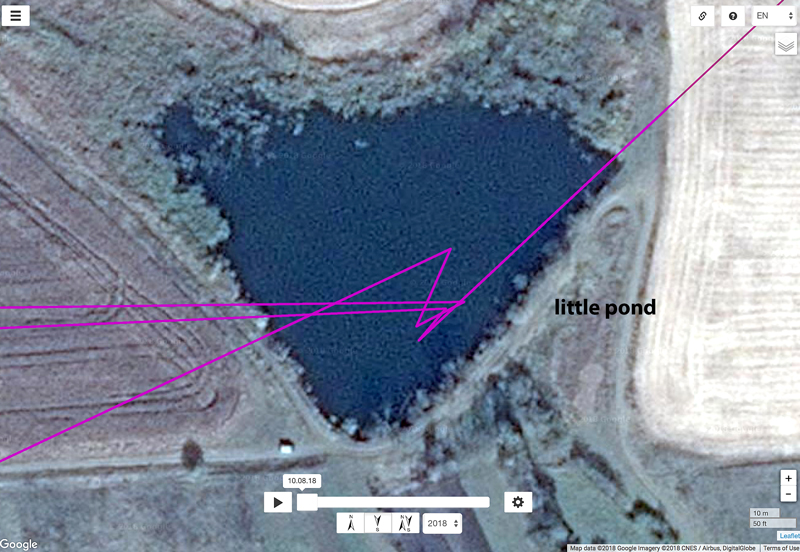 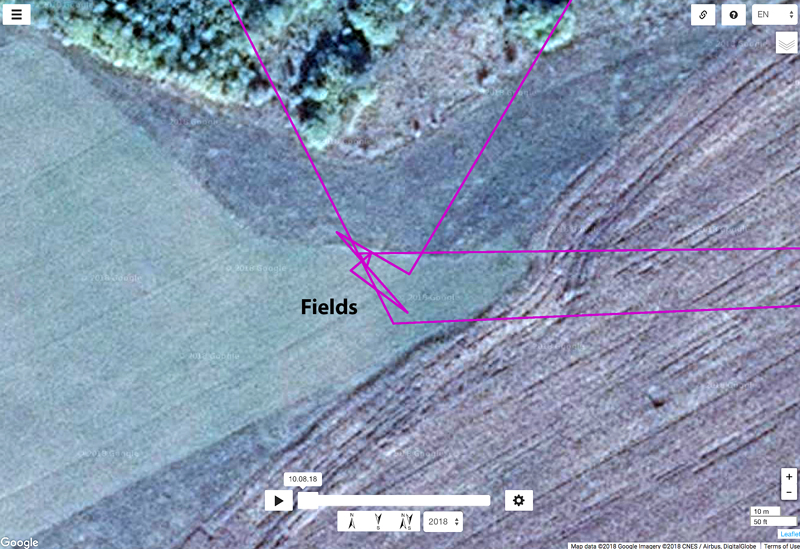 Thanks Anne and Swenja for everything new…
news, updates, maps, and photos!

Happy birthday to a four-month-old Maru !!!

And one new guess : I guess that Karula start to move southward tomorrow (if not today).

I do not know how important the right wind direction might be,
but the wind will (probably) blow in the good direction (to the south) for our 3 youngsters on Saturday. 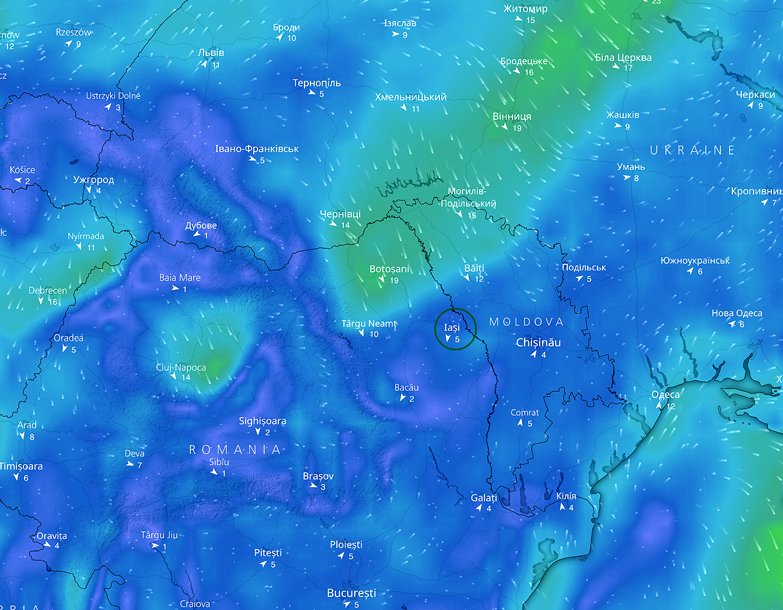 And on Sunday also for Karl. 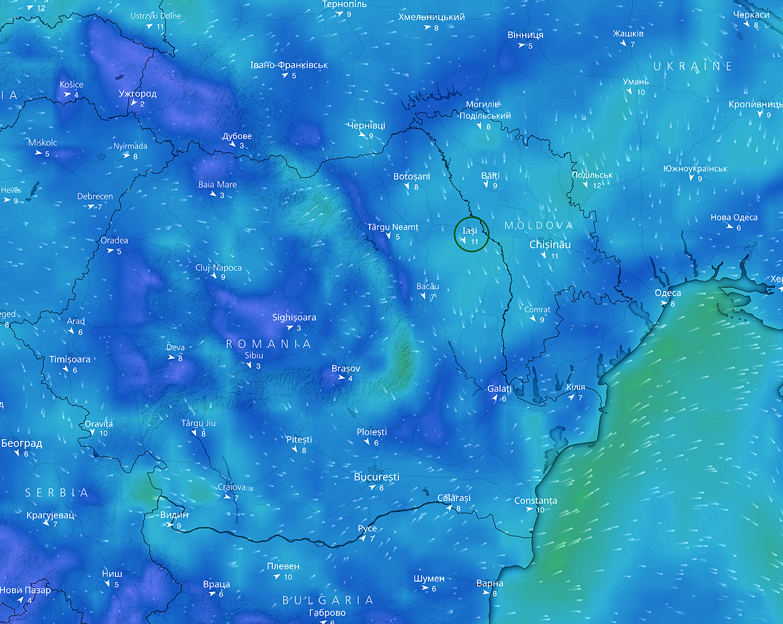 You can check it out on windy.com

A (strong) headwind or (heavy) rain is in any case not favourable.
This article talks about the influence of the weather.
Cloudiness, the presence of low clouds, the wind force, the direction of the wind, rainy or foggy days...
(In French, English translation at the end of the article)

http://www.aves.be/fileadmin/Aves/Bulle ... -4_155.pdf
That article says:
Wind direction
"Wind direction has a strong impact on Black Storks' migration performances. During stopover days, the wind came most of the time from the south-west, and during long distance days, from the north-east or the north-west. The migratory behaviour of Black Storks is strongly influenced by the weather conditions. Rest days are associated with a series of interrelated conditions: high nebulosity, development of "bad weather" clouds, wind from the south-west and high relative air humidity."
(translated by myself)

For "scientific" purposes, it would be very interesting to mention each day the current weather conditions for each of our travelling black storks. Wouldn't it?
Is there a volunteer to do this? (No pictures needed)

Ventu sky displays the climatic developments more generously. Also for days before and the following days.

The wind is favorable, so that our storks move on.

Our Black Storks are still in the same area.
Top

Thanks, Swenja, also for the link to Ventu sky.

The overview.
Eedi is already in the West Bank (Israel - Palestina - Jordan), about 30 km north of the Dead Sea! 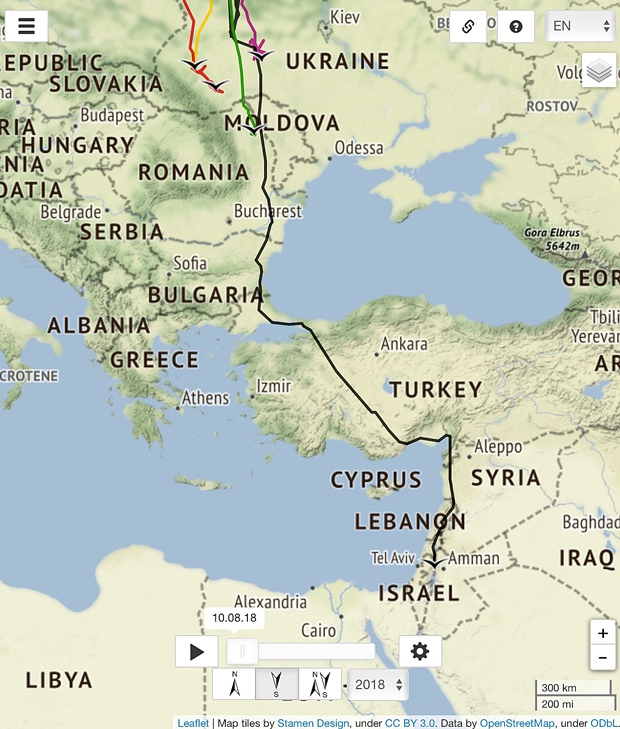 Karl is still in the same area... 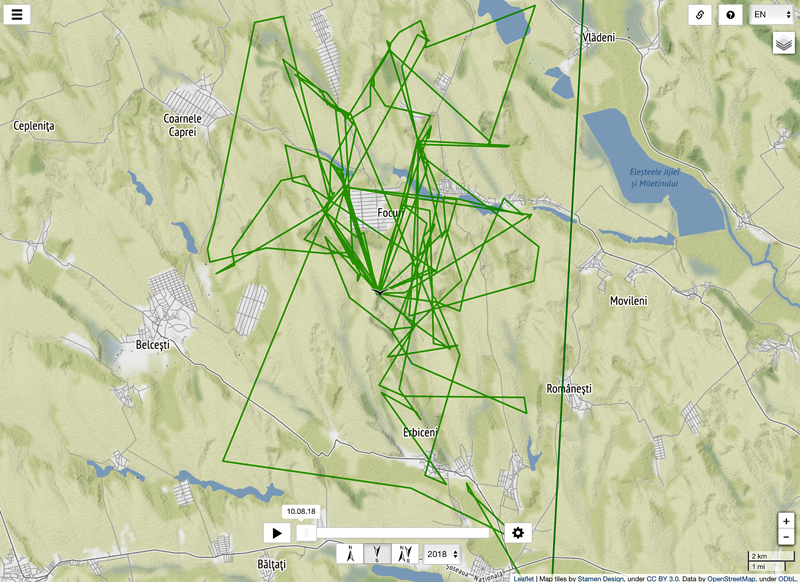 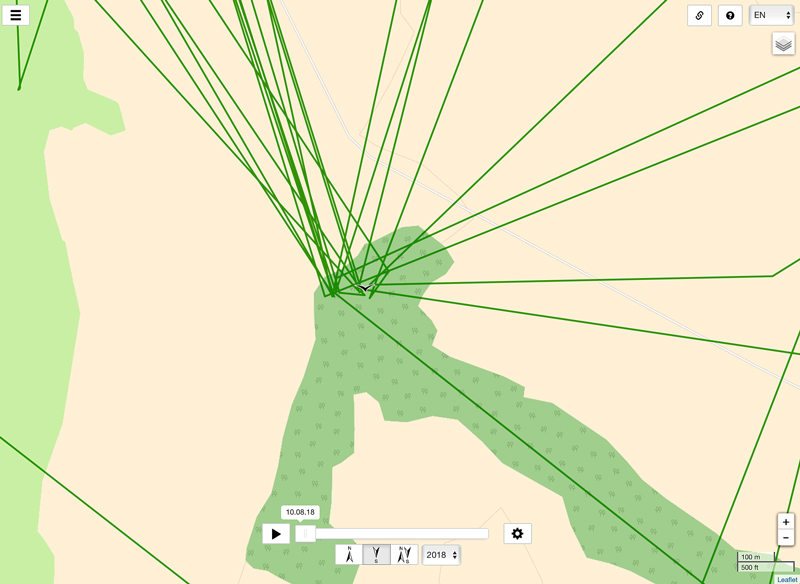 Also Maru is still in the same area. 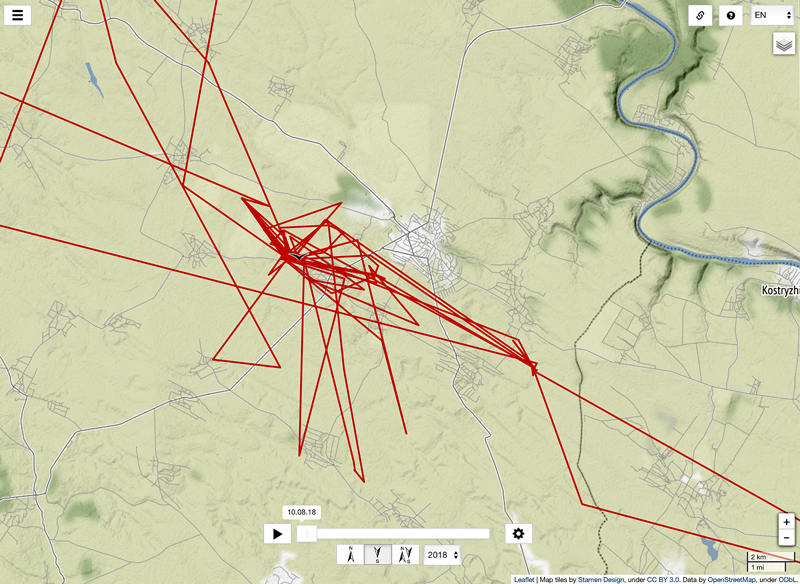 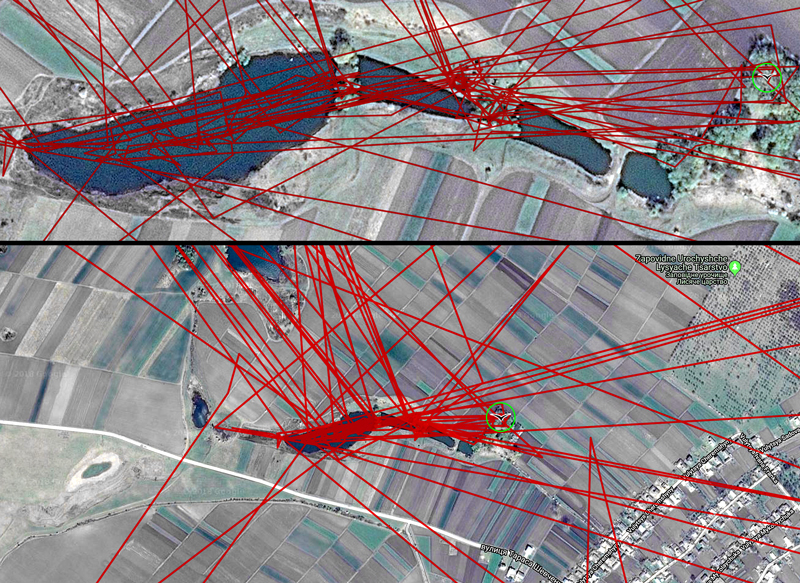 The same satellite view without the red lines. 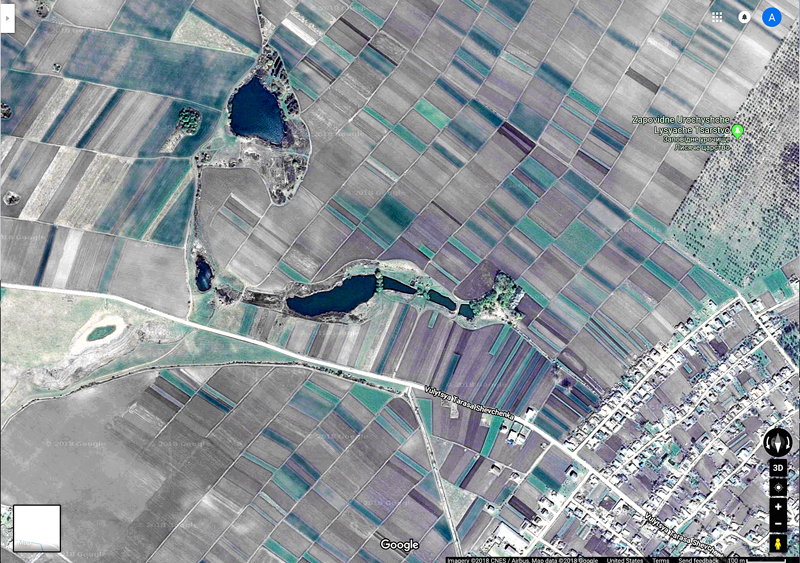 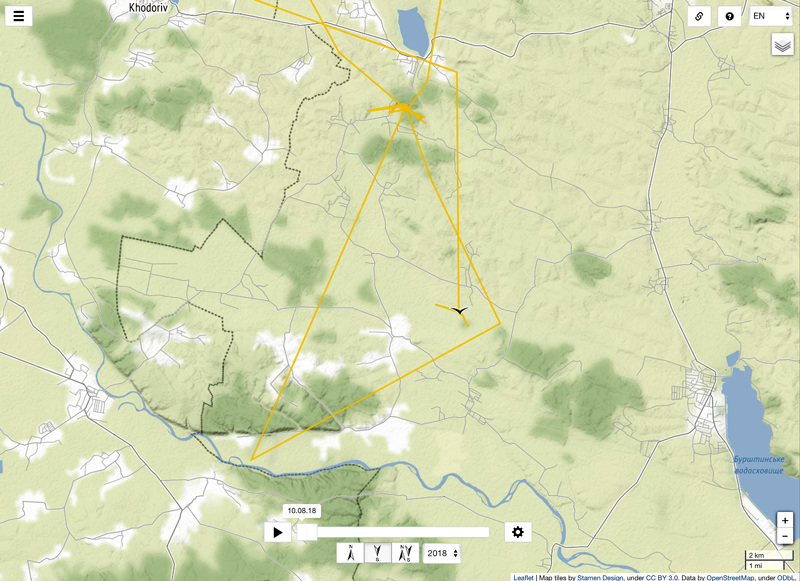 Päike was searching for food in a ditch and on the fields near the Okhaba River. 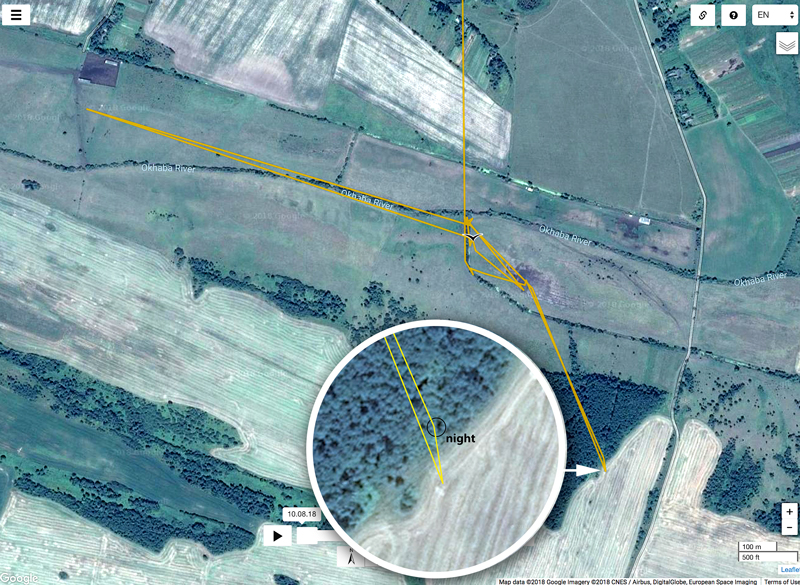 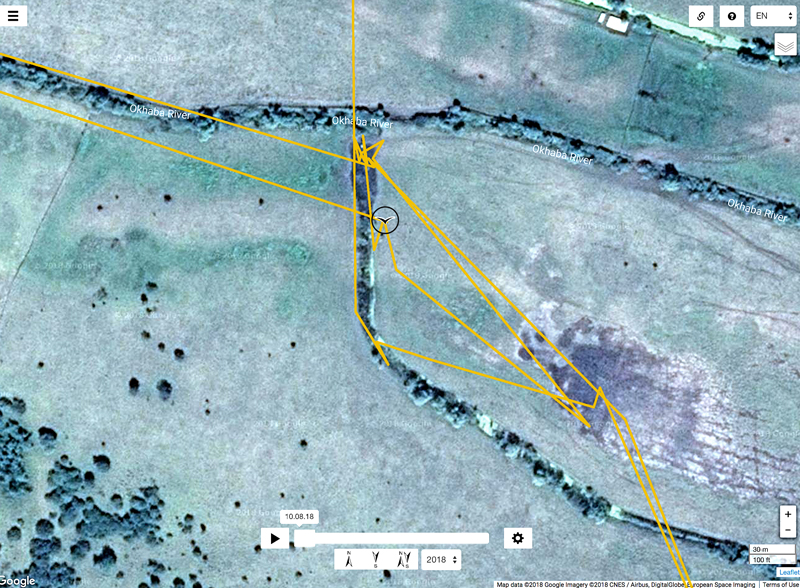 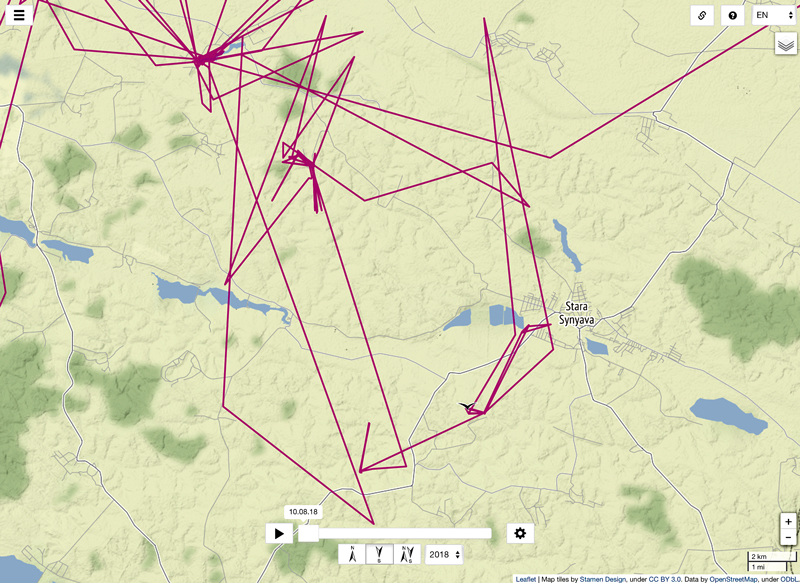 He/she went searching for food in the same little pond near Khytir Dashkivskyi as on 17.09 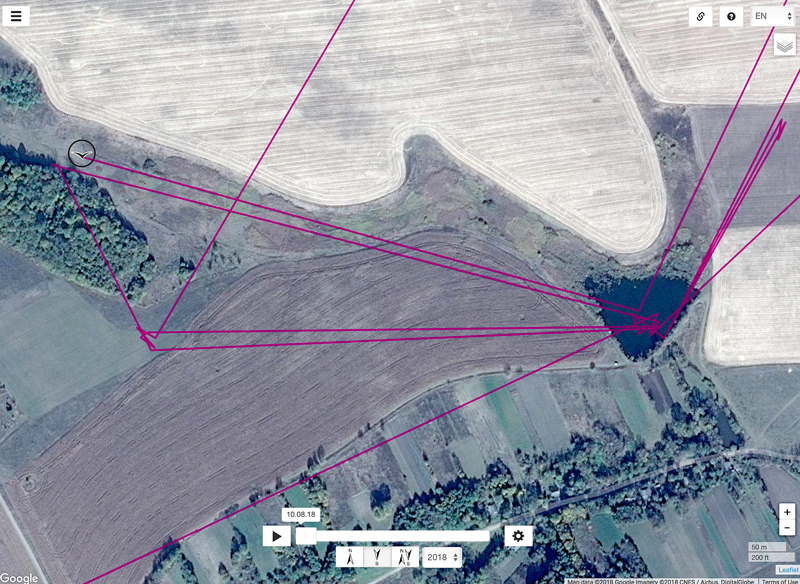 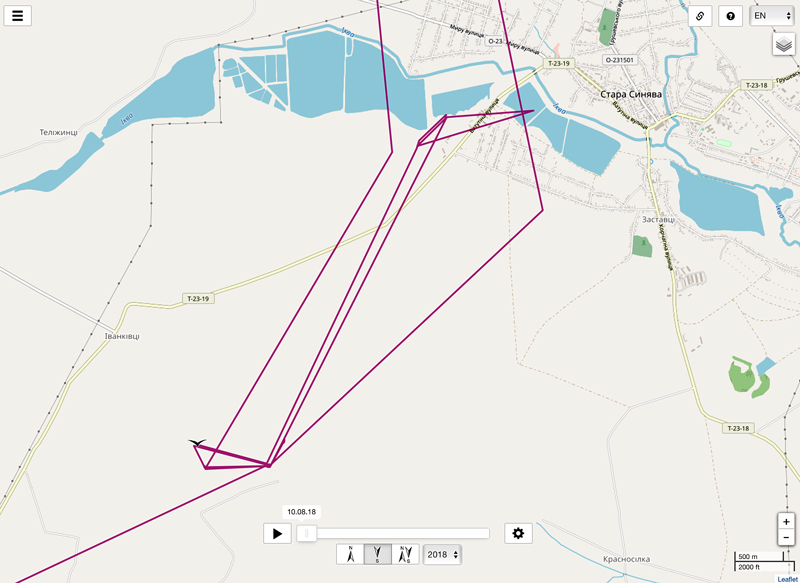