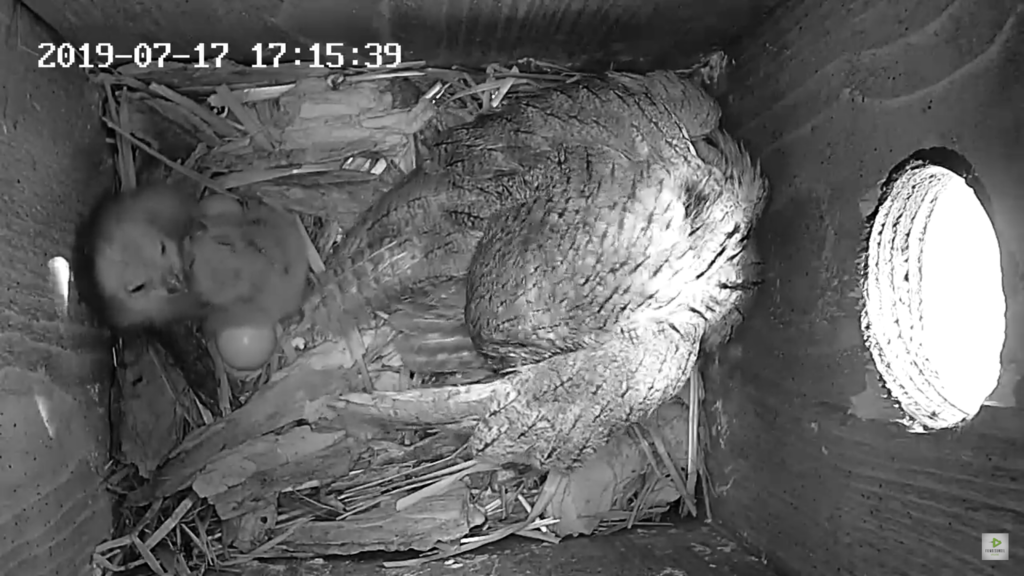 I guess the other two eggs aren't going to hatch... 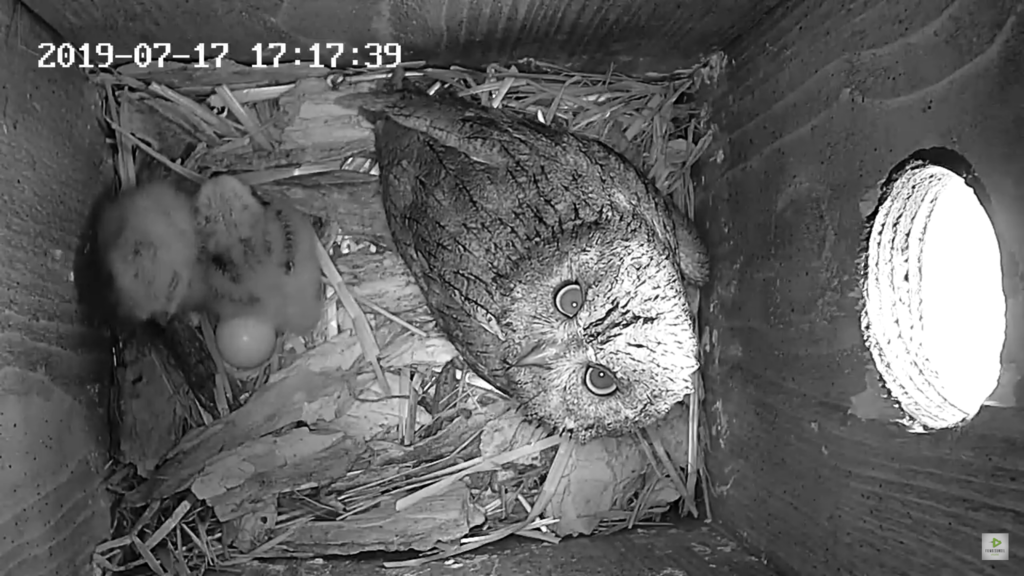 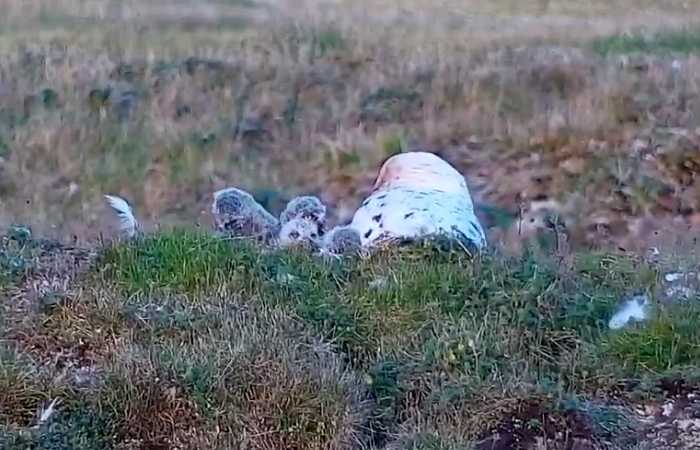 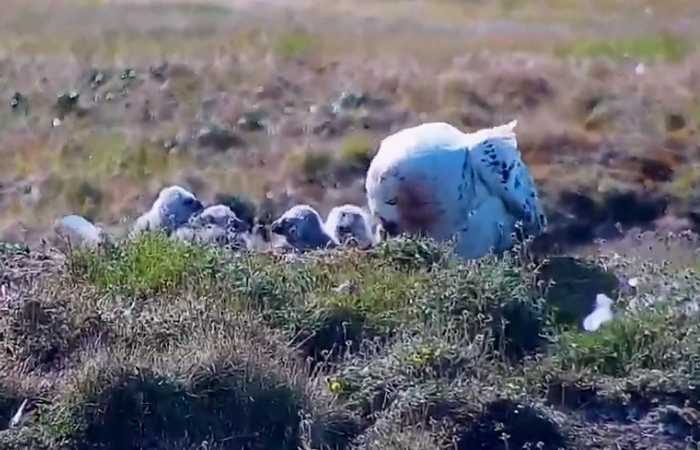 20-07
babies practicing to make eyes as beautiful as mamma's 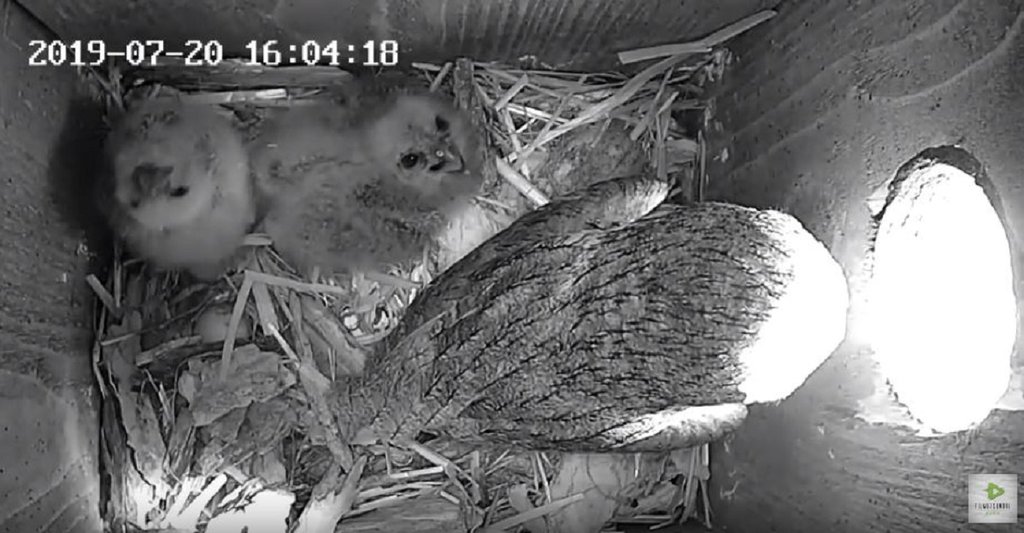 Sadly, one of those owlets is no longer alive! Still not clear what might have happened, but it seemed to be having trouble breathing for several hours before it died. 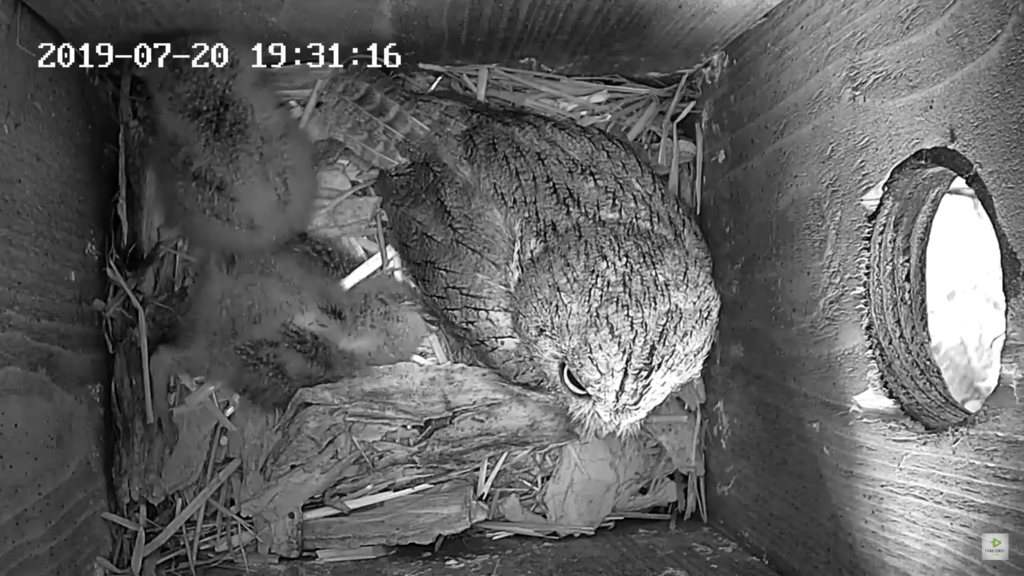 
For several days I could never count more than four, but today I did. Here's a screenshot from about 11 hours ago: 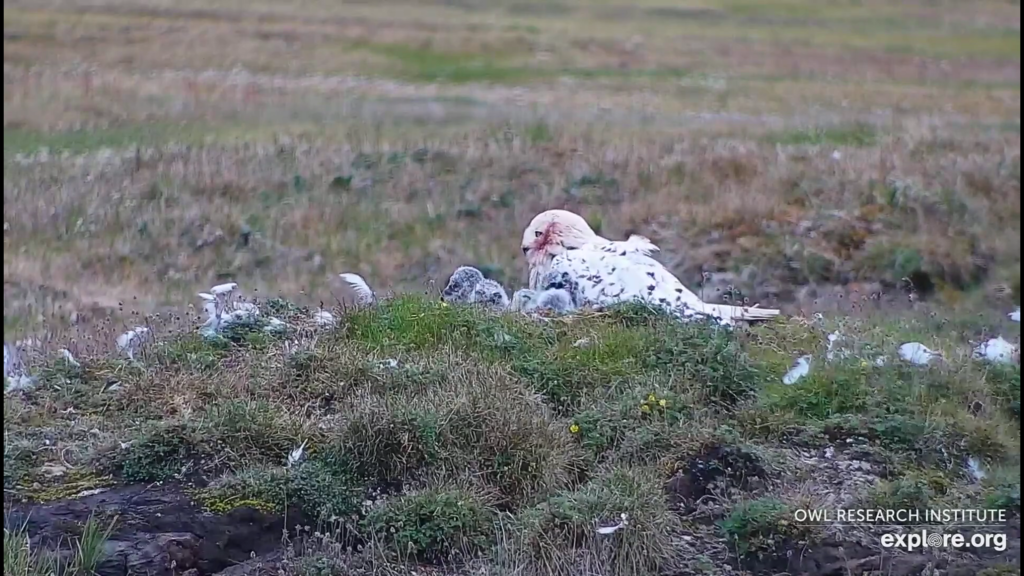 I also made a clip from about the same time, where it's easier to make out all five. Maybe I can upload that tomorrow, but I really need some sleep now

yitmoth wrote: ↑July 20th, 2019, 10:12 pm Sadly, one of those owlets is no longer alive! Still not clear what might have happened, but it seemed to be having trouble breathing for several hours before it died.


Male brings a Lemming. Older owlet grabbs it, but female takes a Lemming away to feed the youngest owlet.


Owlet expolres the vicinity of the nest

Snowy Owl, Barrow, Alaska
https://www.youtube.com/watch?v=tW7veE5vAvU
Owlets were banded two days ago. Not much to see.


Owlets have grown very much, the older ones already have white quills. 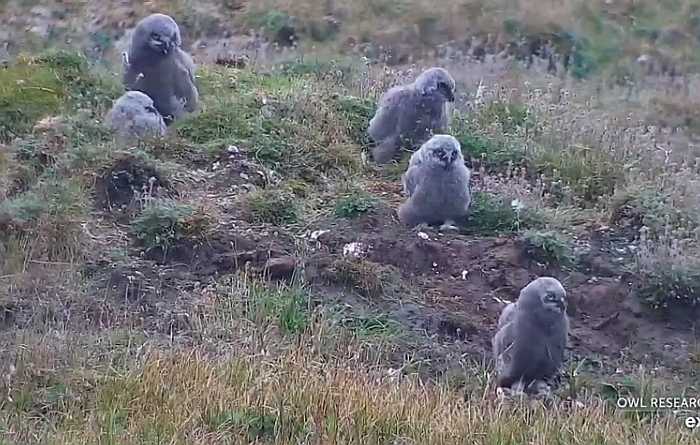 Because they are already swallowing whole lemmings, the female always makes sure that the youngest got food. Sometimes he even takes the lemmings away from the older owlets to rip them for the youngest one.
https://www.youtube.com/watch?time_cont ... diLBODqyro

Snowy owls are more aggressive than other owls. It is not safe to approach their nest

Snowy Owl, Barrow, Alaska
https://www.youtube.com/watch?v=tW7veE5vAvU
August 6
Parents constantly feed their owlets wherever they are. The chicks are not yet able to fly, although they practice their wings intensively.

There was a fox running on the tundra, I hope parents will defend their owlets if necessary.
https://www.youtube.com/watch?v=xbBqJlPQl8k

Researchers describe this defense on FB:

"Snowy Owls vigorously defend their nests against potential threats including fox, jaegers, gulls, even polar bears are attacked when they get to close. And researchers. Males conduct most of the nest defense, but females will often join in. This can involve vocalizations like barking, screaming, and hooting, or occasional distraction displays. But most often our presence at a nest is met by repeated attacks – targeted swoops and dives performed by the male. And, indeed, all of our researchers have experienced the intense pain of Snowy Owl talons in their back."

This pair of Snowy Owls is also described:

"Interestingly, this male (seen here making a food delivery) and Denver go way back. Each season, Denver returns from Alaska with a host of stories from the field. Many of these stories, however, center around this male (or at least he's almost certain it's the same one). He’s particularly aggressive – has attacked him more times than he can count – and has a distinctive hoot. Denver says he recognizes him by his hoot alone. “I really think he recognizes me, too. He’s a great protector of his chicks, that’s for sure [laughs]."
Neither of the parents are banded but he says “the male is at least 4-5 based on plumage (all white) and could be 10, or more. In my opinion, the female is different from last year, which would be consistent with nomadic open country species of owls."
While early indicators do not suggest a high lemming year, researcher Matt Larson points out that "this is a good male." They have seen this male keep a nest fed - even in challenging conditions - when others have failed. It's location is also favorable - historically this area has strong success rates. But of course we never know what lies ahead - and we will not interfere with the course of nature."

ORI's FB is very informative, you can learn a lot about Snowy Owls https://www.facebook.com/owlresearchinstitute/
Top

The camera went down and there is nobody in Barrow, who could repair it.
The last minutes with owlets.

Snowy Owl, Barrow, Alaska
https://www.youtube.com/watch?v=tW7veE5vAvU
August 20
The camera is working again, but so far there is no clear view of the Owls. Lot of Geese and Seagulls can be seen. 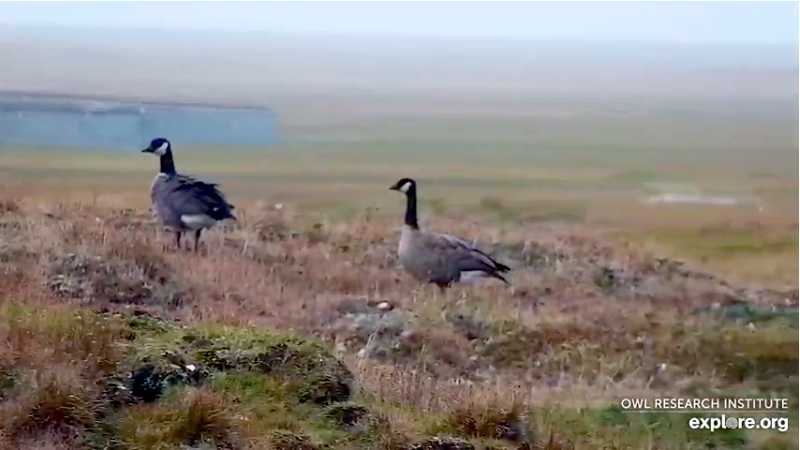 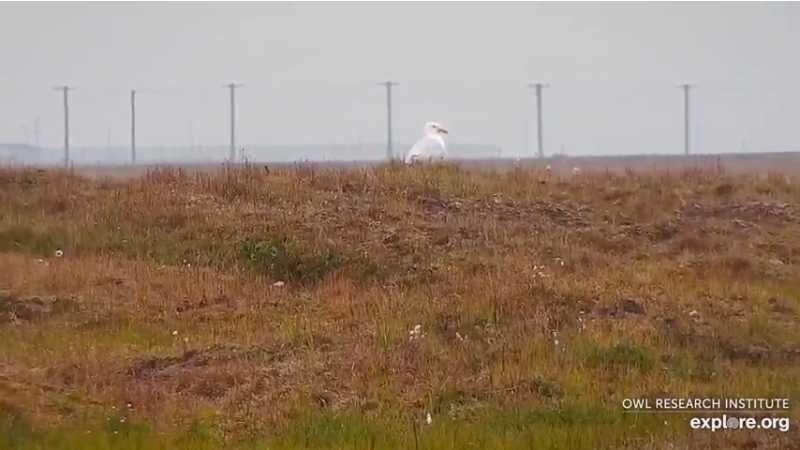 Could it be a Snowy Owl?


One of the owlets came closer to the camera
I can't believe they grew up so fast. 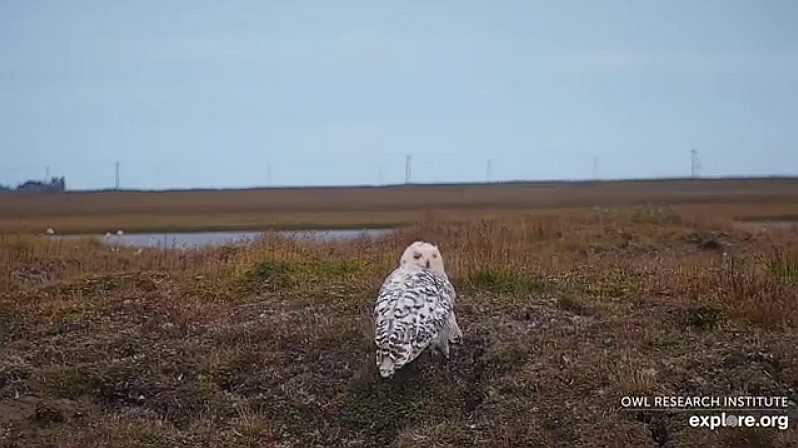 Snowy Owl, Barrow, Alaska
https://www.youtube.com/watch?v=tW7veE5vAvU
August 29 and 30
In my video from the previous post, owlet must have been older than the owlets from the nest near the camera.
Our owlets have been closer to the camera since yesterday and can be watched live all the time. This is the last opportunity, because soon the camera will be turned off.
Sometimes all five owlets gather in one place.


Dad works hard to feed them.

...
Owlets look as if they were wearing ski goggles


It barely finished eating and got the next Lemming

Is this nest already presented somewhere in the forum?
I searched but didn't find it. That's why I would like to do that.

Barn Owls nest in many kinds of structures including tree cavities, buildings, barn lofts and nest boxes. Barn Owl females make "nests" using their own regurgitated pellets, shredded with their feet and arranged in a cup. Unlike most birds, owls may use their nest sites for roosting throughout the year. Nest sites are often reused from year to year. The Barn Owl clutch size can range from 2-18 eggs and the incubation period is about 29 to 34 days.

The parents are in the nest every day and their affection for each other is legendary.

Beautiful to look at and promising. 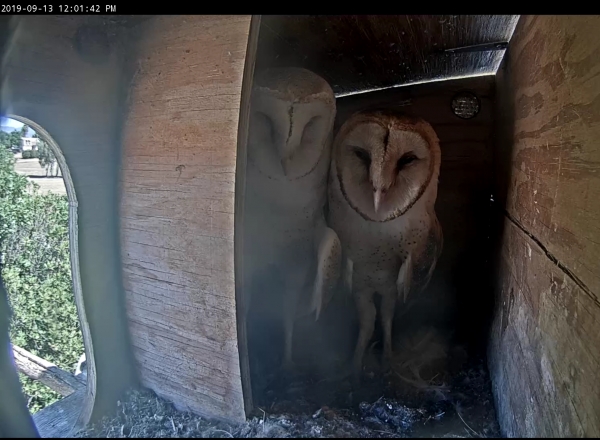 Interesting also the outdoor camera. I often let them run. At night there are bats and during the day many beautiful and cheeky birds. 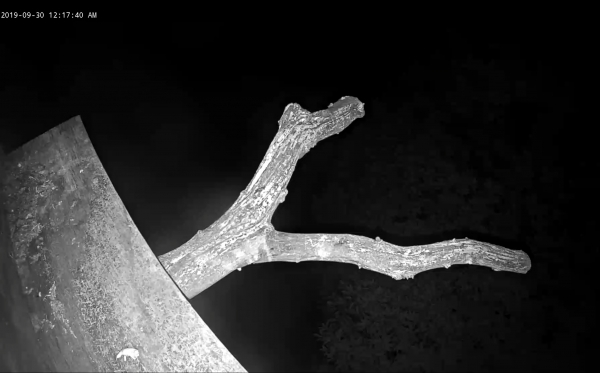 The nest is still abandoned. The owls still seem to be hunting.
"Let nature be your teacher."
(William Wordsworth)
Top

The death of an entire family is very tragic.
Maybe I am wrong, but is it the same disease that many songbirds die of here?

It is very alarming.
"Let nature be your teacher."
(William Wordsworth)
Top

Osprey nest, Charlo, Montana
https://www.youtube.com/watch?v=gYkci0rH8Ac
As usual, when the Ospreys end the season, the nest is visited by various birds. At night usually by GHO.
GHO female with her offspring