Bravo Stefan Brücher. The Bubo bubos will chase the foxes when time has come 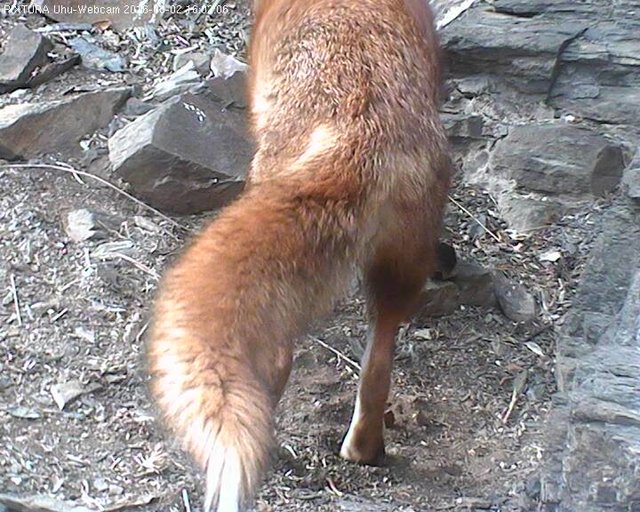 09:47
Fox dropped down from above and had a good scratching there :)
It still looked a bit sleppy, maybe it slept somewhere more upside?


During the last nights my recordings showed no appearance of Eagle Owls in cam view, but a lot of mouse traffic on the ledge

I do not know how to say it , but this fox looks somehow very well fed from .

Bea, is the presence of fox the end of Loti nest for this year?
Top 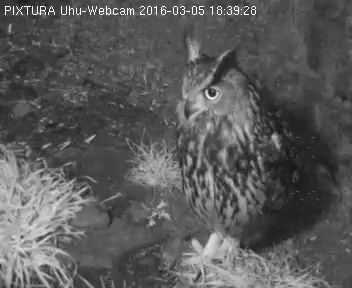 Arrival - Lotte can be heard calling hoarse in vicinity

He stayed on the ledge observing surrounding, then he hears Lotte calling and begins to scratch the ground and leaves after a bit hooting :)

Leo looked at the nest bowl many times, but didn't walk there.

referring to Stefan Brücher´s last statement, nothing is lost for this season because of appearance of the foxes.

He writes that observations of EGE Eulen during many years show, that Eagle Owls in mild regions begin to breed as the first. But now in late winter even from this first ones only a third of them has already begun to breed. The area with the webcam here on the ledge is not one with a very early begin of breeding. Referring to the years before, one can reckon Lotte beginning to breed only since midst of March.

Stefan Brücher writes further, that we humans think that the foxes might be very threatening for the owls, like a lion would be for us humans. But also in the previous years the owls were not very impressed by the foxes and will chase them away when necessary.

Eagle owls have advantage over foxes and act quite relaxed - they are in general quite cool. They most fear humans, but only during daytime. During dusk and night they can even chase humans, which are close to the nest, away.

Translation as good as I can ;)
Nature does nothing in vain (Aristoteles)
Top

Oh, thank you Bea. This is quite good news.
Top

13:07
Fox wanted to settle down for another nap in the nestbowl, but something/someone (?) disturbed it and it left

Someone has a snack in the nest

It is nice to see things picking up again. I think that Sir Fox will move along shortly; the uhus mostly regard him as a fine meal.

Many decades ago, I encountered a pair of Golden Eagles hovering over a fox in a very deep, hot canyon in remote country in Central Arizona. The eagle pair had consumed most of the fox's belly, but hadn't touched the head. The utterly dead fox wore an expression of: "Oh carp! What a bad day this has turned out to be."

The Golden Eagles were awesome!
Top

Precisely one year ago Lotte has laid the first egg. I hope there is still a chance.
Top

A male responds at 18:30
Nature does nothing in vain (Aristoteles)
Top

Thanks for the nice pics of Leo, Mamicja.
Top 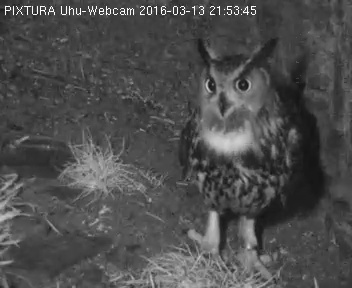 He was not at the nestbowl, stayed more ore less on this one place, observed surrounding - and Lotte can be heard calling hoarse in a bit distance
Nature does nothing in vain (Aristoteles)
Top

Again Lotte can be heard in the background, but she came not in cam view
Nature does nothing in vain (Aristoteles)
Top