E13 was still working on the fishhead and eating,
9.36 E13 stops and E12 is interested in the fish 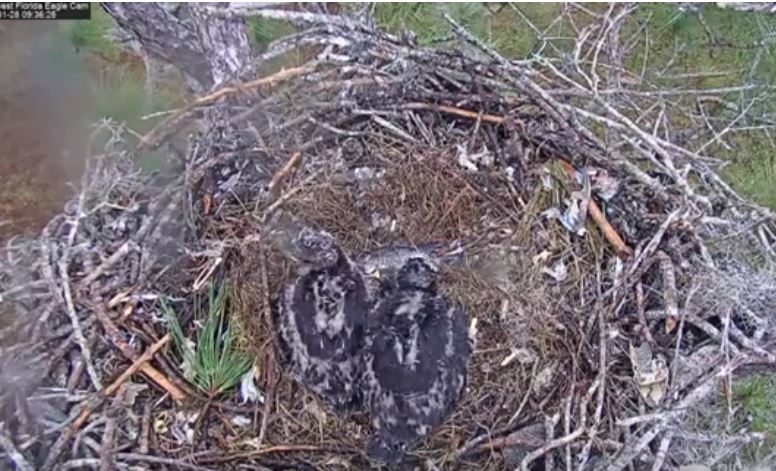 E12 picks at the head part which E13 has opened already 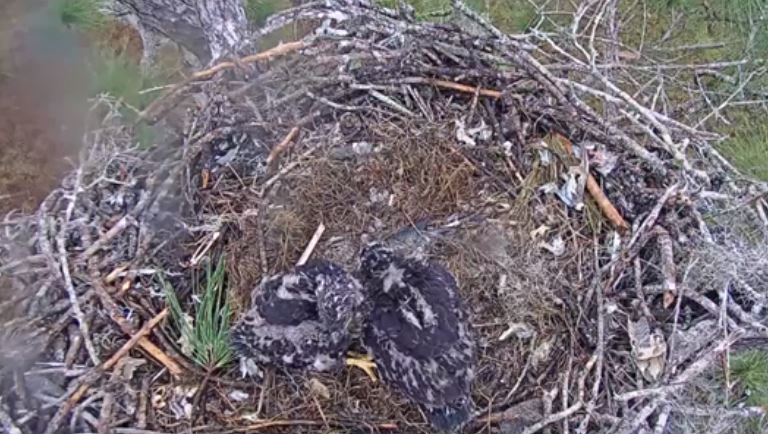 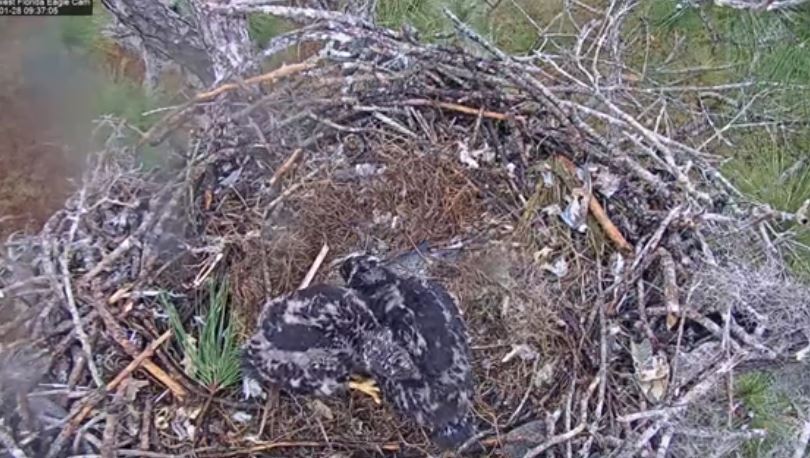 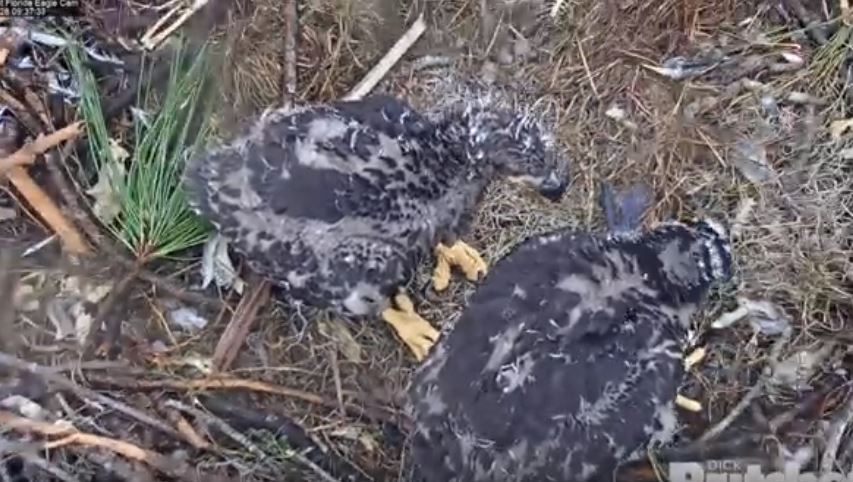 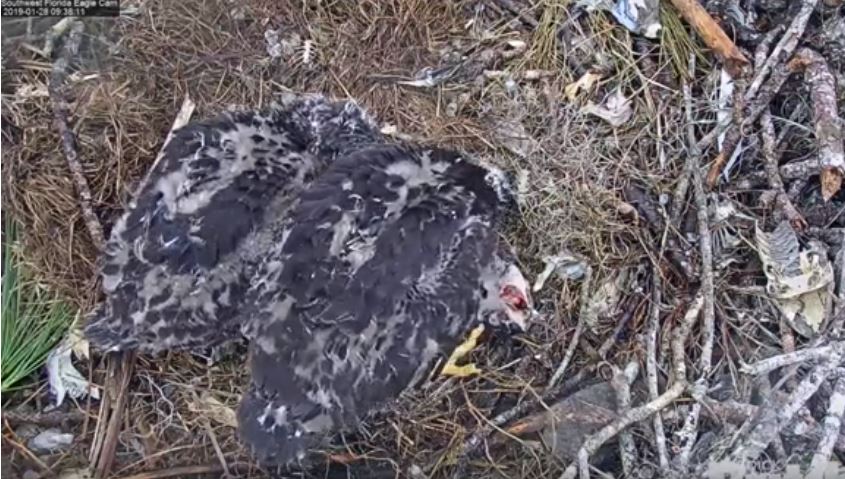 then back to the head, where it's already open 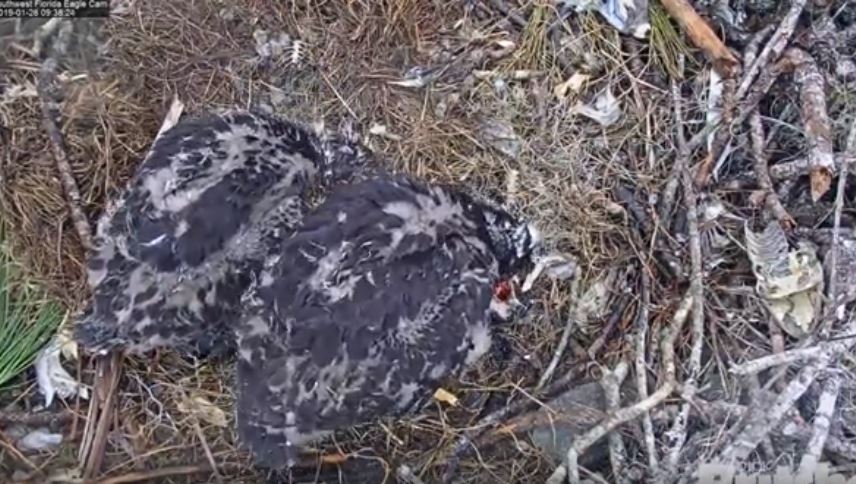 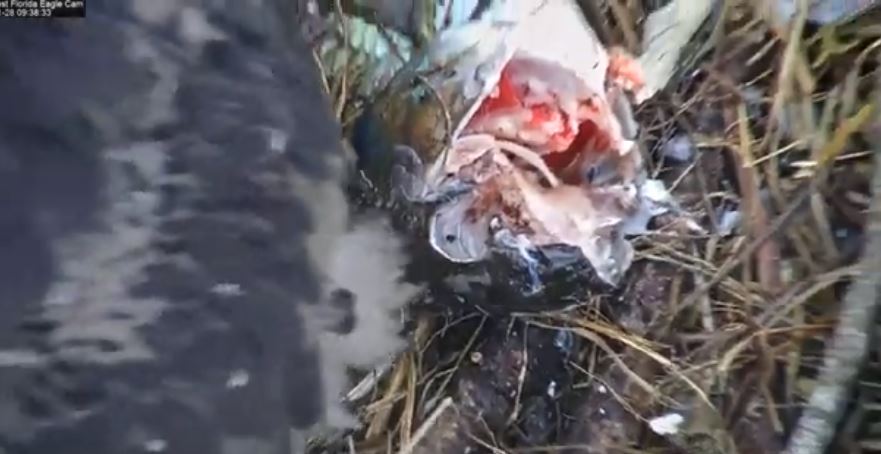 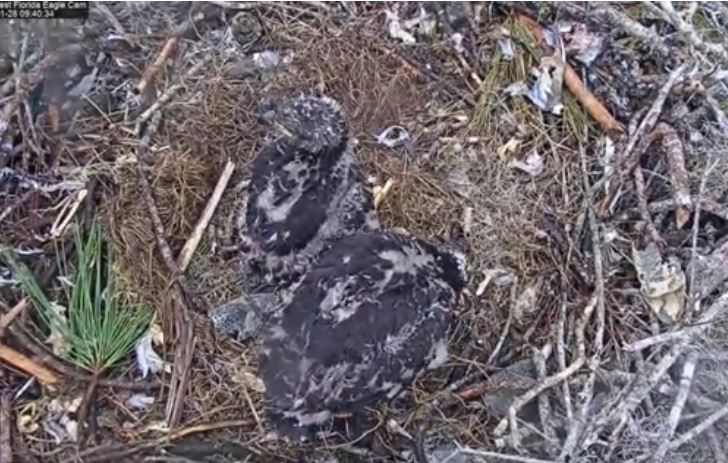 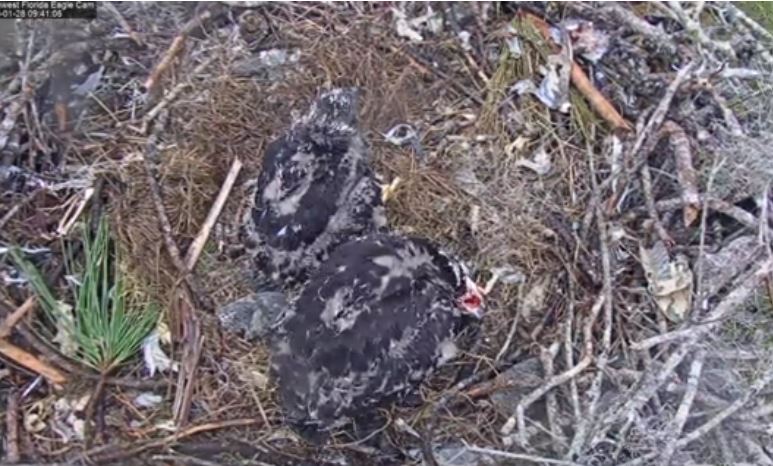 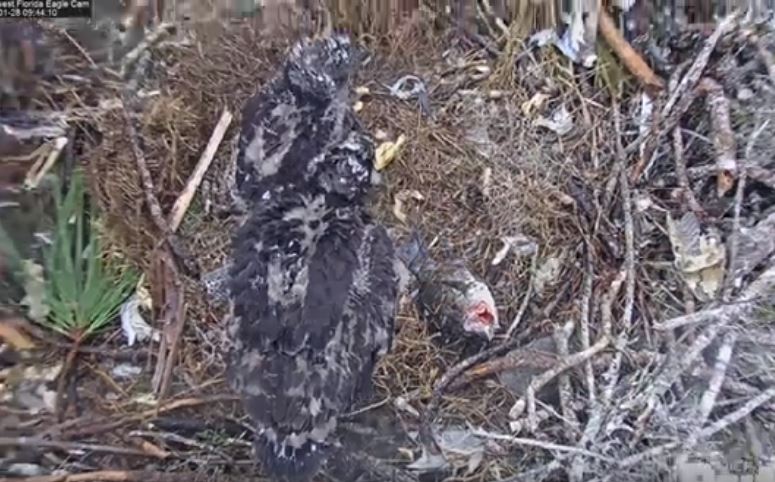 9.45 both did a good job on self feeding 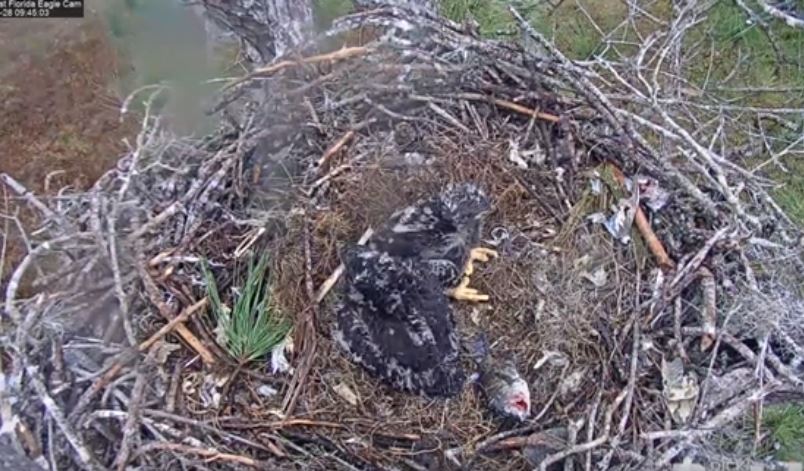 9.46 H comes to nest to feed them the fish they have worked on 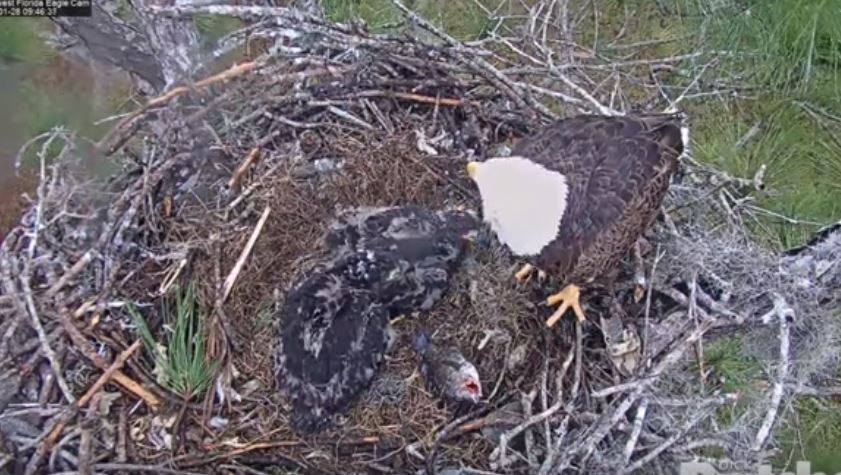 15.06 fish all over the nest - two eaglets well fed, resting 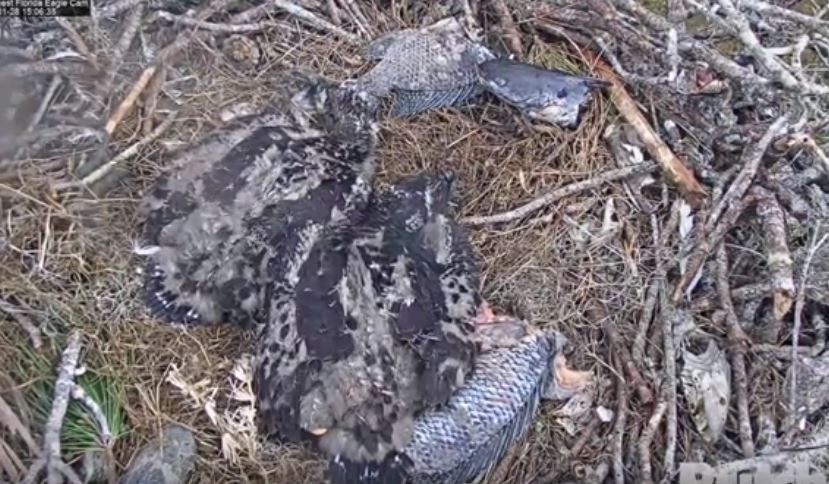 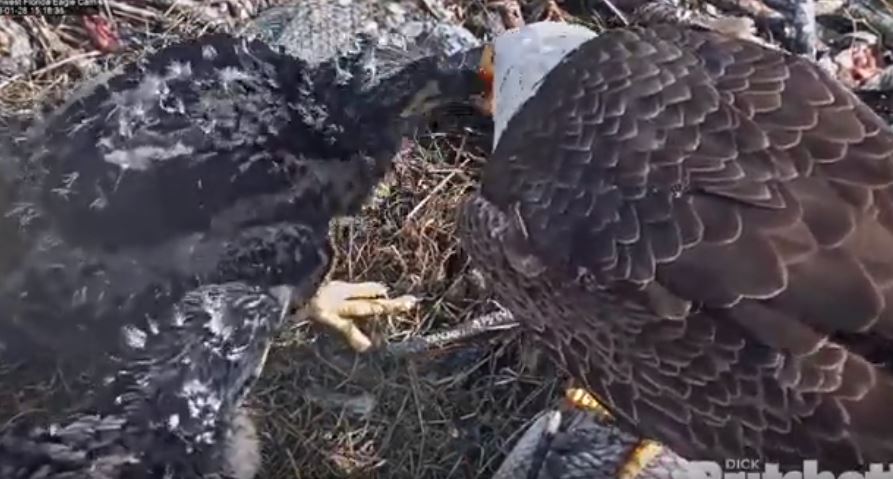 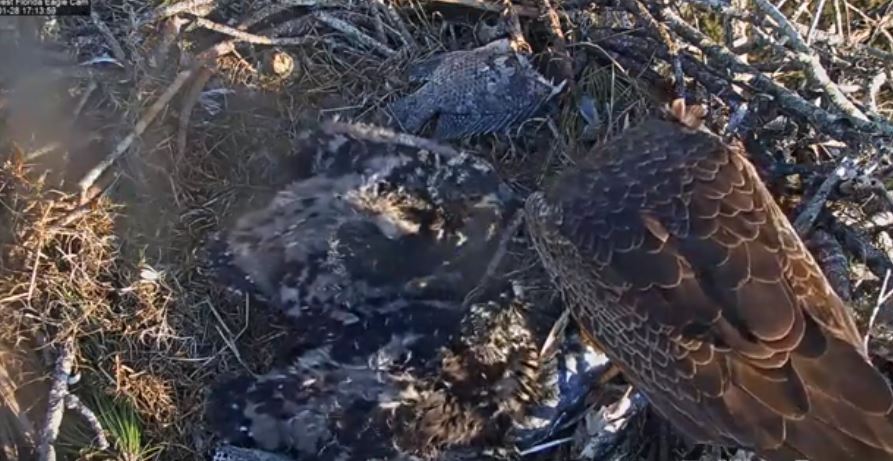 Until 16.25 there were 6 fish brought to nest, including two catfish, one a real big one, and a bird. They ate until 18.30 and there were two fish still left in the pantry, when they snuggled in for the night.
Top

Liz01 wrote: ↑
January 27th, 2019, 2:54 pm
ame, baistar,
I was a moderator in the American chat for a while. They explained me the word. For them it is a normal language usage. They use no other word for it.

If you enter it in google, it makes no sense to me

knock or hit (something) so as to cause a reverberating sound.
he bonked his head on the plane's low bulkhead

this question begins to be in the past already but it came to my mind this morning (sometimes i'm a slow thinker):
has anyone taken up this b-word in the American chat?
it may well be that our American colleagues (who speak American English as their mother tongue) don't know about the second (or 3rd, 4th,...) meaning of this b-word. it may be a naughty word in British English only.
they might be as shocked as you have been to learn about it.

Liz, i think that the example that was given by Google is not the best possible. imagine a person hitting the side of an empty metal barrel with a stick or a fist (or a head). the result will be a 'reverberating sound' caused by bonking the barrel.

'beaking' sounds much like 'pecking' in my ears, like a hard and somewhat violent action. i prefer eagle kissing. it tells what it is about although in many cases it's potentially violent, too.

- that's only my preference of course. you should use the same words as the Americans use in the American chat.
Top

Liz, i think that the example that was given by Google is not the best possible. imagine a person hitting the side of an empty metal barrel with a stick or a fist (or a head). the result will be a 'reverberating sound' caused by bonking the barrel.
..........

Ame, thanks for your explanation. Unfortunately google translater does not give all possibilities.
If you can not speak English it is very hard to find the right word. Therefore, it also comes to misunderstandings among us members. In the last post to Solo I used German, although it is not allowed. I did not know how to explain it well in English.
Top

i think one can also use some short sentences in other languages than English, in order to explain or clarify things, provided that a translation to English is also given. whatever helps us understand each other is ok.
Top

it is very quiet at the European nests which i am mainly following so i have been reading these pages backwards... and i have been thinking, slowly as i often do.

i found a short exchange of words which did not please me at all. first of all the episode was quite off-topic. as itself off-topic discussion is not so objectionable if the deviation is not very extensive (for example many pages long). our pondering on the differences in the British ans American dictionaries can be seen as off-topic but i don't see it as very inappropriate.

what was repulsive in those few posts was the attitude which they reflected. the author seemed to have no regret in not being in friendly terms with another member. on the contrary: it seemed to be amusing and quite a normal thing to write unpleasant posts to and about the other person.
on top of this the author gave the impression that we the administrators and moderators approve writing such posts. we do not!

if you have problems read this:
viewtopic.php?p=72#p72
it's probably best to write a pm. those are noticed easiest.
a reminder of the rules can be found a few lines above that:
"When you joined this forum, you agreed to refrain from insulting, hostile or inflammatory posts."
adding smiling smilies does not hide the sarcastic meaning under a coat of sugar. unfriendly posts are not acceptable.
Top

@ame
All this: on topic?
Top

yes, it is relevant to conversations on this topic.

edit (added after some more thought): unlike in earlier debates i have this time decided to keep the questionable posts in the topic and not delete them ("wipe them under a carpet"). they may serve as to show what kind of discussion is not needed here.
what comes to the other party in the exchange of words i have (naturally) disqualified myself from dealing with the posts of this person. they are dealt with by other administrators/moderators.

if anyone has further questions about this they should write to Jo UK or one of the other administrators/moderators. i hope that we can now forget this incident, but not forget the lesson taught by it.
Top

I hope this matter is now resolved.

I formulated the Rules in 2008, rather more than ten years ago. There has been no reason to make changes, other than copyright and picture size notes.
The requirement for a polite and sociable atmosphere remains as strong as ever and we are so pleased that, forum-wide, that is how it is now. Occasionally, there are some "disturbances in the force". I hope they pass quickly.
Top

By chance I discovered here a very interesting discussion.

and I'm still convinced, these are the barbs and no pigment disorder.
At no time did I doubt that something was wrong or he or she was not fine.***

and thanks balistar i saw the growing barbs on the tongue of the young eagle.
balistar , i stared a while fascinated at your picture of the eagle beak, - and then: I can see both of them! small dark tips. great!
i made this collage from your pic (with the tongue of Dad) https://raptorresource.blogspot.com/201 ... ngues.html) 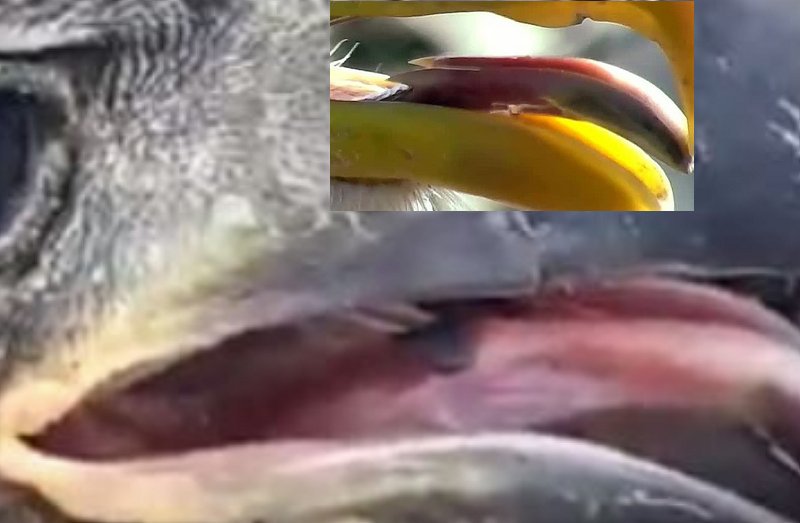 I have to thank you, thank you so much.

Your collage, if I may say so, is excellent.

Without your reference to these barbs, I certainly would not have seen anything

This morning, around 08:30 there was giant fish on the nest.

Who knows which fish was it ?

This morning, around 08:30 there was giant fish on the nest.

Who knows which fish was it ?

That could be a Suckermouth catfish
"The Suckermouth catfish has a flattened and elongated physique. His body is wide and massive at the front, he tapers towards the body end its body color is greyish-brown to yellowish-brown, there are also darker color morphs the entire body, including the head, is covered with dark, irregularly shaped patches, the patches on the head being significantly smaller than those on the rest of the body
Tops of his head and his body are sheathed in longitudinal rows of bone plates the underside of the head and the belly of the sucking mouth cat are naked his fins are also covered with dark, irregularly shaped spots."

The fish was just a shell.
delivery .. 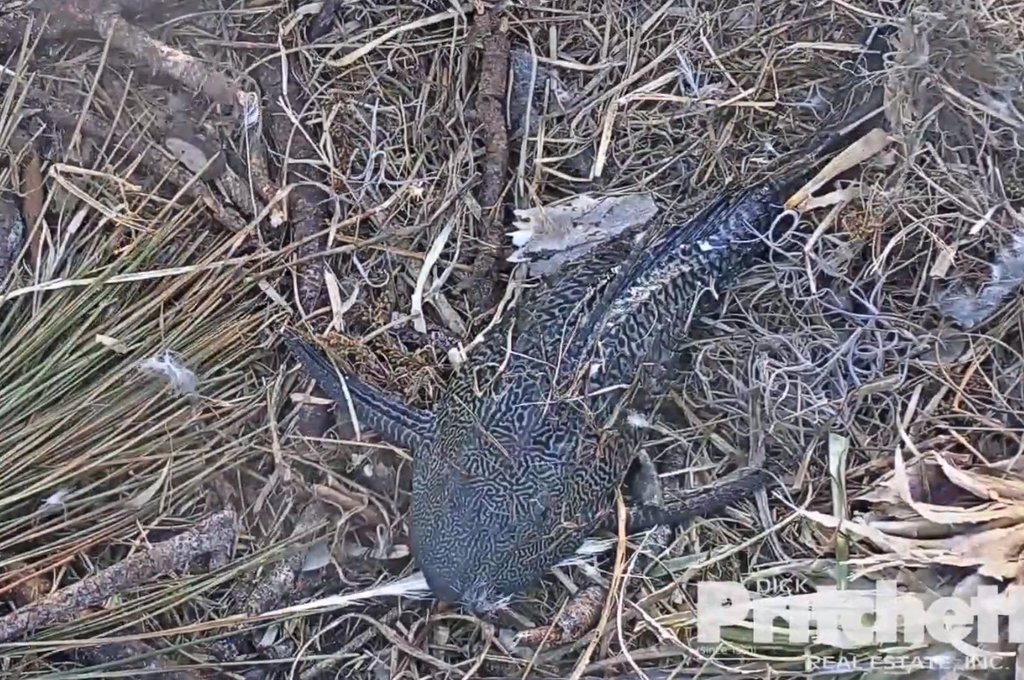 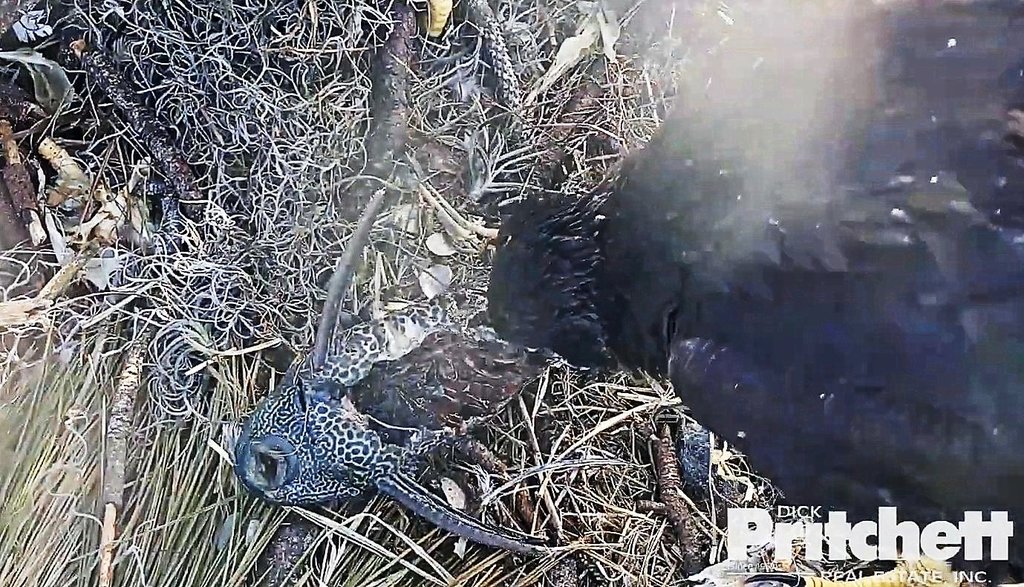 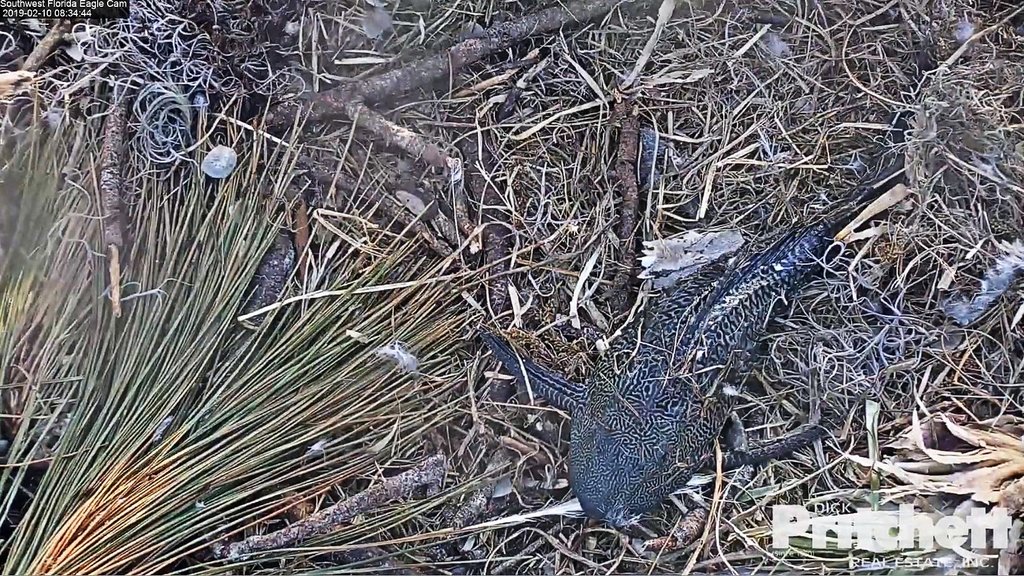 It looked like a kind of Catfish. But the colors and special "wings" made it hard to know.
Top
Post Reply
5143 posts