Our wish was fulfilled, the camera which was installed last year at the nest of the buzzards Mari and Mihkel started working again today (March 3).

Let's hope that both return and choose this nest again to raise chicks. 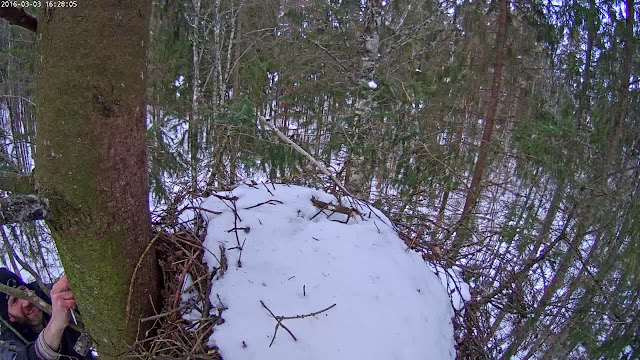 
We ask our forum members keep one post at 3 pictures with a maximum size of 800 x 600 pixels plus one video and refrain from posting too many pictures of the same happening.
If you have to show many nice photos and want to share them with everyone, please make an account at one of the photo hosts (like Photobucket, Google, Flickr etc.) and arrange them in albums and post the link to the album. Likewise you can handle videos by preparing play lists at YouTube or other video hosts. Interested people have the chance to look at them at leisure.
This also helps to load the pages faster for people with slower internet connections or on mobile devices.
“One can measure the greatness and the moral progress of a nation by looking at how it treats its animals” (Mahatma Gandhi)
"You can judge a man's true character by the way he treats his fellow animals" (Paul McCartney)

About our buzzard nest

In 2015 the Estonian bird of the year was the Buzzard. In Estonia three kinds of buzzards can be encountered: the Common Buzzard (Buteo buteo), found in Estonian all year round, the European Honey Buzzard (Pernis apivorus) breeding in Estonia during summer and the Rough-legged Buzzard (Buteo lagopus) wintering in Estonia. For this occasion two Common Buzzard nests were fitted with web cameras to be able to follow the nest life.

The nest is in the Tartu area, in a commercial state forest. A train line is not too far and a farm (with one or more barking dogs) about 200 m away.
On this nest, which was camera 1 last year, we could follow the nest life of a Common Buzzard pair which got the names Mari (left) and Mihkel (right). 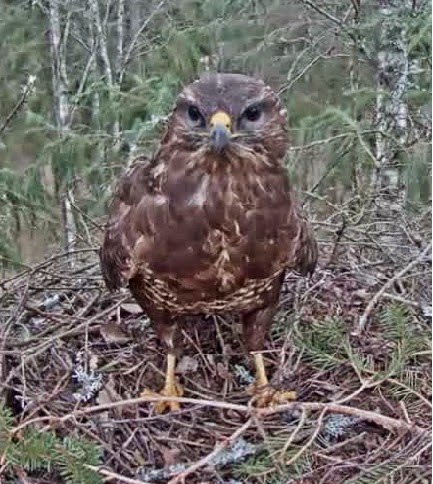 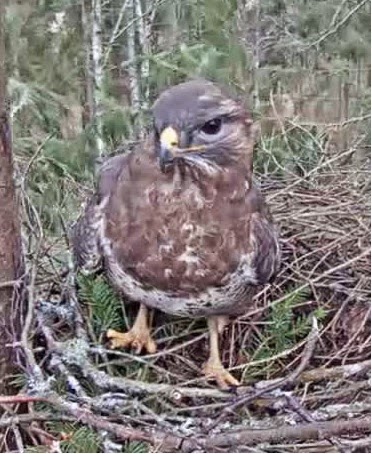 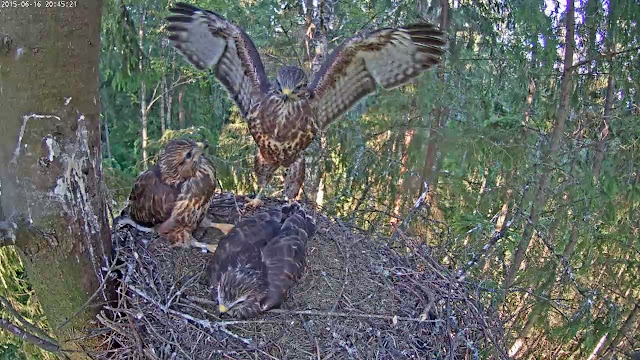 Jürgen wrote about the history of the nest:

This nest was found in the spring of 2012 (at around 26th March) by myself. I suspect that at that year the pair had layed eggs already by that date.
In 2012, 3 nestlings were ringed in the nest. In 2013, 2 nestlings were ringed in the nest. During the winter between 2013 and 2014 a portion of the forest near the nest was cut down. In 2014, 3 nestlings were ringed in the nest.
The nest is in a spruce tree around half-way to the top (no official measurements have been made but I would say around 13 meters off the ground).
As we know, neither Mari or Mihkel have rings and ringed buzzards have never been spotted on this territory. Also something interesting I have noted about this pair is that they sometimes hunt quite far from their nest. I have spotted one of them nearly inside Tartu which means they went past at least one other buzzard territory.

Buzzards are medium sized birds of prey found almost all over in Europe and parts of Asia. The common buzzard measures between 40 and 58 cm in length with a 109–136 cm (43–54 in) wingspan and a body mass of 427–1,364 g. The colours vary from very light to very dark.
Buzzards become sexually mature with about 2 years and buzzard couples stay together a lifetime. They stay in one territory and can become up to 26 years.
Breeding starts in Central Europe from mid March, on average it is from around mid April. The female lays usually 2-3 eggs, size 56 × 45 mm weight 50–60 g. Colour white with reddish brown and greyish brown specks. The eggs are laid with gaps of 2 to 3 days.
Breeding time lasts 33 to 35 days, depending on the size of the clutch. Breeding starts later in bigger clutches.
The buzzard chicks stay for about 42 to 49 days in the nest before fledging. After that they will stay around the nest and will then follow their parents begging for food for around 6 to 10 weeks. After that they leave their parents' territory, but stay not too far away.

The typical clutch of the buzzards consists of 2 to 3 reddish-brown to greyish-brown eggs, size 56 × 45 mm and weight 50-60 g.
The eggs are laid with a difference of 2 to 3 days, incubations depending on the size of the clutch. Incubation starts later in a clutch with 3 to 4 eggs than in a clutch with 1 to 2 eggs. Incubation time is 33 to 35 days.


1st egg: April 6, shortly before 11 AM
2nd egg: April 9, at 8:53 AM
3rd egg: April 12, around 8 AM
“One can measure the greatness and the moral progress of a nation by looking at how it treats its animals” (Mahatma Gandhi)
"You can judge a man's true character by the way he treats his fellow animals" (Paul McCartney)

Sadly the first chick, which started the hatching on May 10 did not manage to get out of the egg and died in the process.

May 12 - we could welcome the second chick shortly before 5 PM
May 15 - the last of the three eggs released its inhabitant at 11:30 AM
“One can measure the greatness and the moral progress of a nation by looking at how it treats its animals” (Mahatma Gandhi)
"You can judge a man's true character by the way he treats his fellow animals" (Paul McCartney)

Ringing of the chicks

The ringing of the two chicks took place on Monday, June 6th

Jürgen, who did the ringing, posted this photo of the chicks and the measurements he took during the ringing:

Second (small) chick:
L-41055
Wing length - 157mm
Tarsus length - 67mm
Tarsus width - 6mm x 4.7mm
Weight - 620g
“One can measure the greatness and the moral progress of a nation by looking at how it treats its animals” (Mahatma Gandhi)
"You can judge a man's true character by the way he treats his fellow animals" (Paul McCartney)

Names for the chicks:

Update July 18: DNA testing shows that both chicks are male. Name for the second chick is changed to Marek
viewtopic.php?p=488565#p488565
“One can measure the greatness and the moral progress of a nation by looking at how it treats its animals” (Mahatma Gandhi)
"You can judge a man's true character by the way he treats his fellow animals" (Paul McCartney)

June 26 Both chicks started branching in the evening

Our wish was granted, we got the camera at the buzzard nest! Keep your fingers crossed that Mari and Mihkel return to this nest and will again raise chicks here!
“One can measure the greatness and the moral progress of a nation by looking at how it treats its animals” (Mahatma Gandhi)
"You can judge a man's true character by the way he treats his fellow animals" (Paul McCartney)

my fingers are crossed

Thank you Felis for the new topic

Very nice, thank you! Maybe it gives a reencounter.

Great indeed to have this cam again!
It was a very happy nest last year. I hope that Maxi, Midi and tiny Maimu are doing fine, and that we'll see Mari and Mihkel soon. May you have good luck with mice and everything!
Top

that sounded like boar to me: the sniffing and grunting and the quick pace of footsteps sounded like trotting of relatively short legs.
thank you Fleur!
(and a belated Happy Birthday!

also from me all happy birthday

a Cat is singing

..and I think a Buzzard far in the distance, not sure. It's not a Jay!