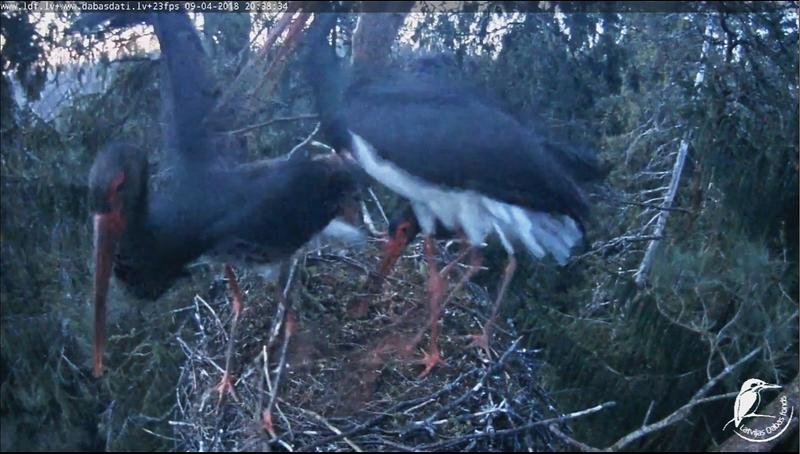 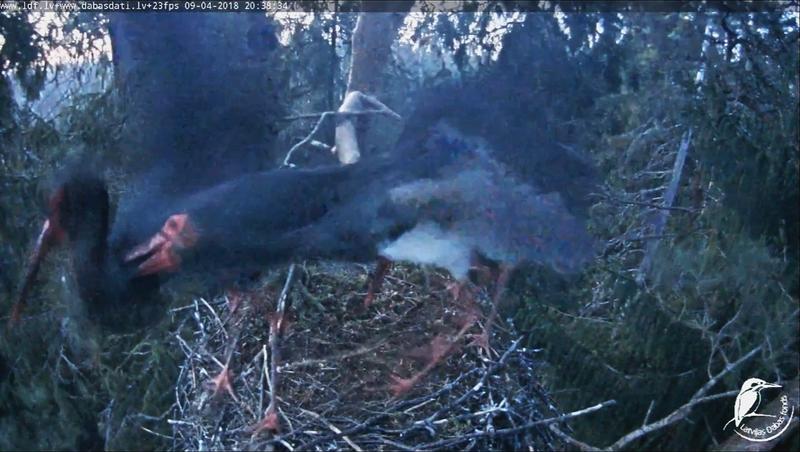 the nest will be empty tonight. If the fighting does not stop, we will not see anything here. No chicks ..

enough for the day.. for me.
Top

First when I read the news from today, I was amused about the male storks efforts, to get that special branch. The video about it is really nice and I must laugh! BTW: I don’t think, the branch bothered him, but probably he wants to get it for nest building.
Then I was happy to read that the storks have finally started nest building.
At next it was reported about a fight.

After watching the video with great fear ahead, I must say, that the fight was not as hard as expected after your descriptions.
Although the pictures in the video are hard zu watch: In my opinion this was in no case an attempt to kill. To hold one storks neck with the beak seems to be a usual way for Black Storks, to throw an unwanted stork out of nest. Of course it is a bad procedure for the stork that has to endure that. But I don't believe that he then is seriously hurt. I have seen this way of fighting for the first time, when at Ozols nest the later arriving female throwed another female out of the nest. It happened within five seconds. This must have been in 2016, I guess.

Nevertheless ... These fights are very bad, when they lead to an unsuccessful breeding season. I feel very sorry for all the involved Black Storks. They all should have their nest.

The question I would like to have answered, is, who is the stork who won this fight. It’s the same as with the females fight. If I have seen it right, the stork who was at first at nest (at 15:40), was thrown out by the other. Later a pair of storks arrived and mated a lot. Who are they? The pair from yesterday? The new couple? Probably there isn’t an answer, as they all are not to distinguish.

Oh, now it came to my mind, that there probably could be an answer: When hopefully tomorrow is a couple on nest and the male stork also works hard with that special branch on the left, we know who he is. Hopefully.

Liz, in the late evening it was „only“ once, that a third stork came into the nest. It was at 20:38:33. Two seconds later he was thrown out. Within the next minute both other storks left the nest and did not come back til darkness. I could see it in the last moments of the youtube stream. You can see it also in the pictures you have posted; they all have the almost same time stamp.

Thank you for all the reports, pictures and the videos! 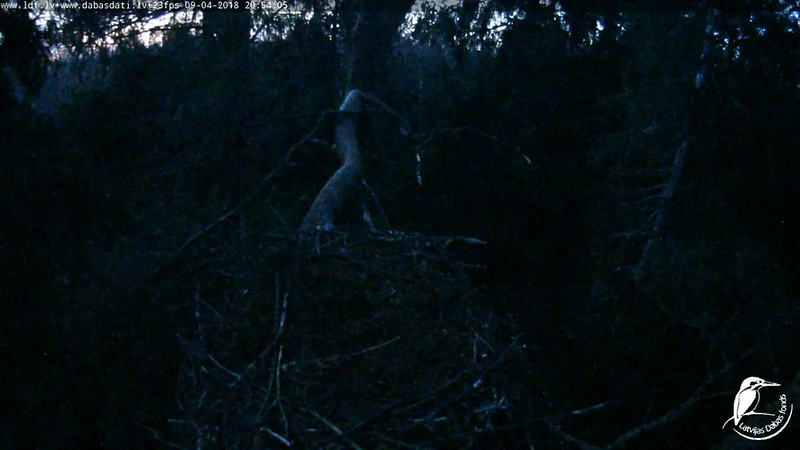 thank you for your opinion!

90% of the fight takes place outside the nest. At 19:00, the stranger was near the nest. Both defended it.

For me, the branch bothers him. At the beginning I also thought that he would like to use it for nest building. But I also saw that he was trying to bend him out, away from the nest.He tried several times a day. There is no video. I do not make videos anymore from every event.

"again" means, that one of them bit again.
not another fight!
Top

one of them is in the nest 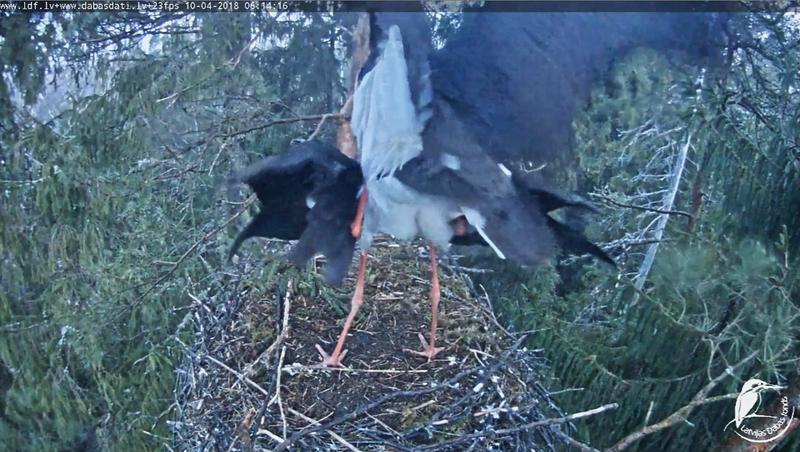 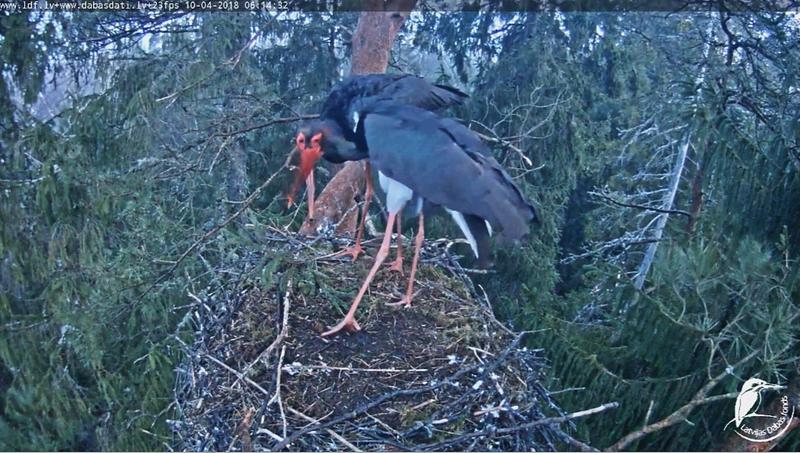 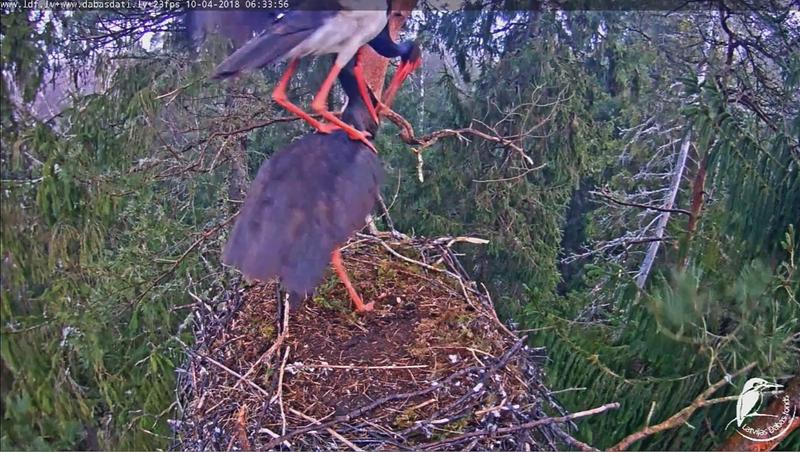 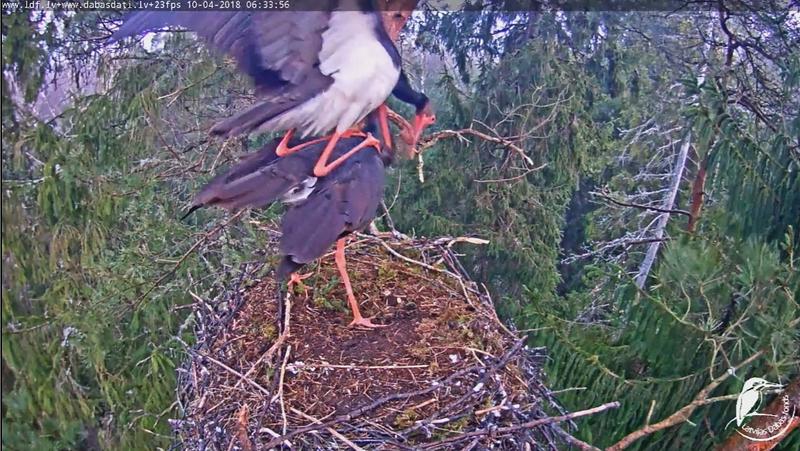 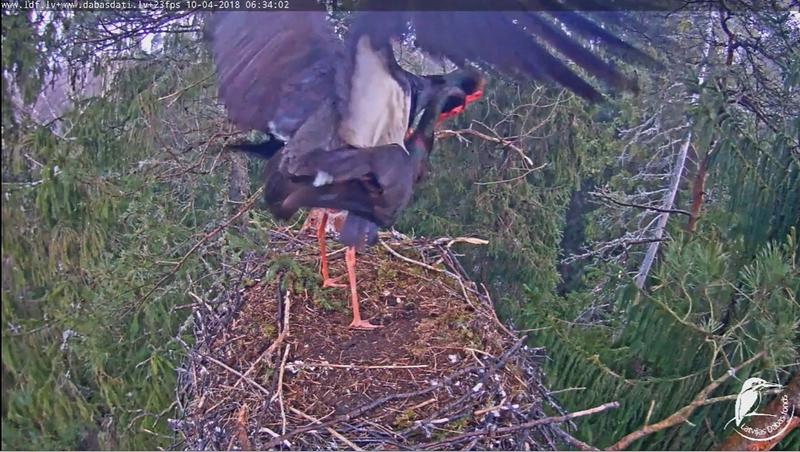 I hope today is a calm day and you can prepare the nest. It does not look good.
Top

Comment from Maris S.
.....
Something is different this year with the return of the birds and the problem is unlikely to be here, but somewhere fatal. Today was Aivo, who, after another 16 days in the neon, was in Romania, on the other side of the Carpathians, where he should not have been. (I remind you that he was already in his nest at Vērgale on March 30th).

...I am now (tomorrow) to the forest - watching for good and do not miss the wonders - there is a lot going on now. If everything happens as planned, I will look at some (10) nests and then there will be an idea where the birds are and where not. "

I hope, it includes Ozols nest

I have to go away for a few hours (to the clinic)
Then I try to translate what Maris wrote about the situation and the storks. He thinks a strange couple is in the nest.
The beak shape of the original owner male is different

I have to read later...
Top

Good morning Liz,
thank you very much for all news

...I am now (tomorrow) to the forest - watching for good and do not miss the wonders - there is a lot going on now. If everything happens as planned, I will look at some (10) nests and then there will be an idea where the birds are and where not. "

I hope, it includes Ozols nest

Good Morning !
Many thanks Maris for remembering my request; Ozols is like a relative and we think about him after last year which was hard for him.

I hope you'll have a nice trip with good surprises.
Peace for the new nest

female long time on "parent" branch
08:03 female to nest, whisting, greetings, she is preening her, ... both ps, Liz, nobody had open bill

I have a message from M.S. that yesterday was another figth around19:00. i only saw one fight and one defending .

I hope, that I am will can go to my Home soon.
Top

I was only watching the cameras so far. This is my first comment. Hope, you would accept another newcomer!

Just at 10:43 camera time there was a visitor in the nest - a forest marten. One of the biggest threats for eggs and chicks in the forests.
We should inform ornithologist M.Strazds - perhaps he knows how to react in order to eliminate this threat.
Top

thanks a lot for reporting 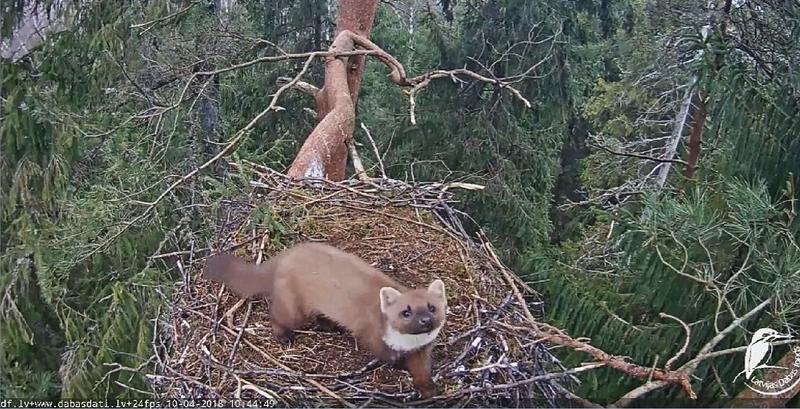 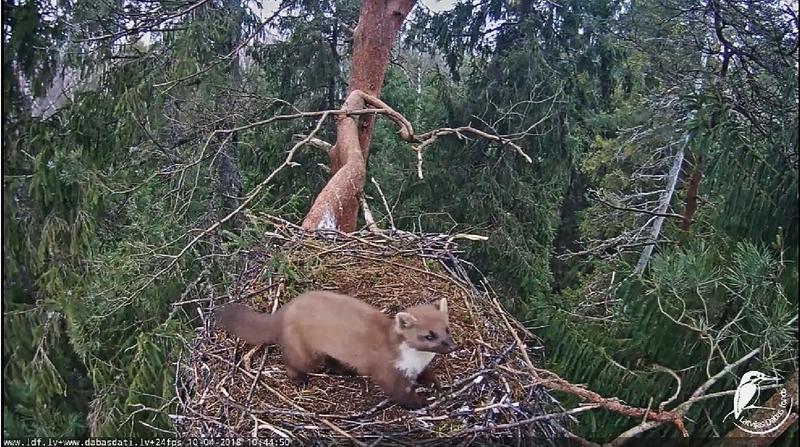 I was only watching the cameras so far. This is my first comment. Hope, you would accept another newcomer!:D
Just at 10:43 camera time there was a visitor in the nest - a forest marten. One of the biggest threats for eggs and chicks in the forests.
We should inform ornithologist M.Strazds - perhaps he knows how to react in order to eliminate this threat.

Thank you for the hint with the pine marten. Also many thanks to Lea T, she has wrote it in the chat: You are great

EDIT: nobody will do anything. It is nature. The Marten has a right to live. It's a beautiful animal
Top

Helia - welcome to the forum, and thanks for the report of that mink.
I have notified a member of Kotkaklubi who can contact M. Strtazds.
Top
Locked
3258 posts