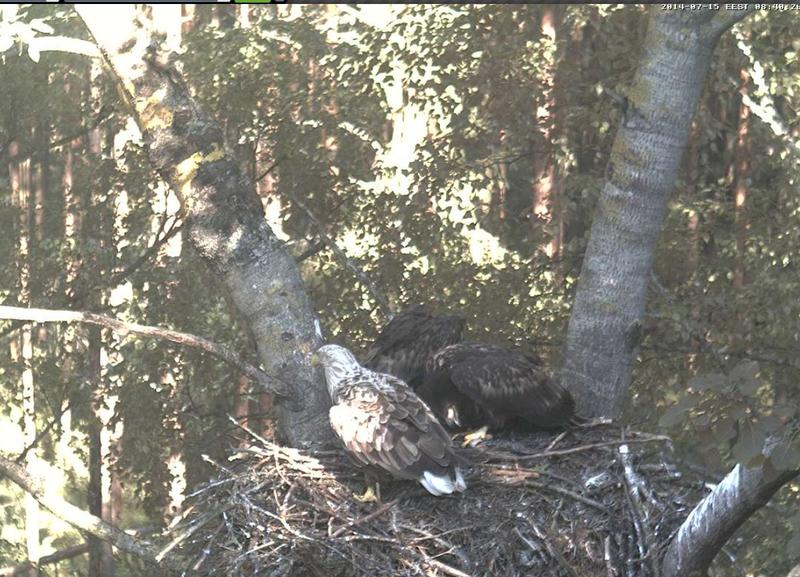 before this visit from Lubana had to have been there a parent. an eaglet has eaten

EDIT:between 8:27 and there was a delivery. No picture in Pontu Snapshot.
Top 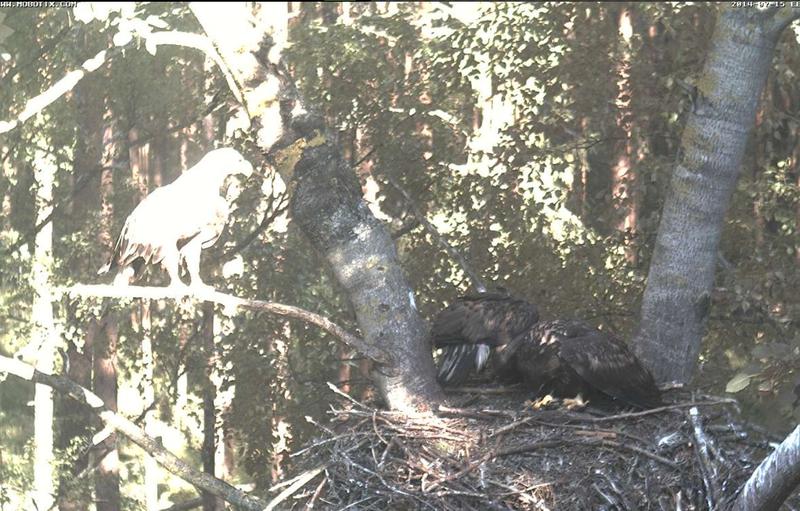 She stood there longer, because I have found 3! pictures in Pontu. She was about for 3 minutes since Both eaglets eating

EDIT:It is still fish there. Today is a good day for the eaglets

one eaglet started investigating the big fish that is lying on the nest. the other is still standing on the front left corner of the nest and looking out.
i didn't get a good picture of the fish but it looked so wide that it's probably a bream.

a minute later wind begins to blow. eaglets look around and listen... both have their beaks half-open. it must be rather warm there.

i have now a Pontu clip of this delivery. the food was a fish and Pukite managed to get it after some hard dispute. well done Pukite!

i couldn't get very clear pictures from the video but this gif will give some idea of the struggle which the kids had and one can see the size of the fishie. it wasn't very small.

at this very moment it begins to rain. there has been rumblings of thunder but not near.
Top

yesterday morning Makonite was very frustrated when she lost the fishie to Pukite. she whined all the time as Pukite was eating. after the fish was gone (it wasn't very small but not big either) Makonite decided to do something constructive and tried to jump to the left branch. she failed and then she made some wild wing exercises to compensate for it.

yes, Makonite got up on the branch on her second try.

she stayed there for nearly a minute.

7:54 Makonite made some more wing exercises. at tried to get on the branch again but this time she failed. she missed the target partially: she grabbed the branch with her left foot but right foot grabbed the trunk of the tree.

at about 2 min 27s from the beginning of the clip.

eaglets are listening to the thunder. i think it is coming closer but it's still not close.

9:14 Lubana brought a fish which Pukite again managed to take after hard struggle. this fish wasn't small either. - i didn't find any other delivery before 9:37. maybe Makonite was eating some old food. there are plenty of fishbones in the nest.

Makonite was furious when she had lost the fish to Pukite and Lubana left.

Makonite whined and squeaked while Pukite was eating her fish. then finally Makonite stole the fish from Pukite!

after a while Pukite took the fish back from Makonite!

the thunder is creeping closer. the last rumble the eaglets greeted with waving wings.

a Pontu clip. i think it is Sartas who called in the forest (about 2 min 11 s from the beginning).

14:50 first Sartas called, then both.
thunder is going away.

edit: i think i hear both their voices in this Pontu clip.

Ame, Sartas and Lubana call? Or was it just an eagle?

yesterday morning it was sunny and apparently very hot. eaglets had no shadow where to hide from the sun. they stood on the nest turning their backs to the sun and held their wing partly open on their sides in order to dissipate extra body heat. at this time, about 10 am onwards, they were visited by butterflies again like a few days ago, too.

i noticed the butterflies in some Pontu pictures where they were sunbathing on the lower parts of the nest. this Pontu picture was taken at 10:33

to my surprise they can be seen fluttering in Pontu videos, too.


in fact there were at least two butterflies flying around the nest. one of them even landed on Makonites back.

i must now draw back my words about these butterflies: i think that they were red admirals (Vanessa atalanta) after all, not poplar admirals. both are big dark butterflies with coloured marking on the upper side of their wings, but the markings of poplar admirals are white while on red admirals the markings are red/orange. the red spots form arches on the wings. together they seem to form almost a red circle on the butterfly when it has its wings wide open.
here's a picture of a red admiral (Vanessa atalanta)

and here a poplar admiral (Limenitis populi). this also has orange spots on the wings, but from a distance i don't think these can be seen well. the orange ring on the red admirals wing on the other hand is a striking pattern, which can be seen from far.

i borrowed these pictures from Luontoportti/Naturegate. there one can identify different animals and plants:
http://www.luontoportti.com/suomi/en/perhoset/

Liz01 wrote:Ame, Sartas and Lubana call? Or was it just an eagle?

i think i heard both their voices, but i can't be sure. at least one (of them) sounded like Sartas. the sound was a little choppy.
Top

for a little while, they were fasiziniert of this butterfly

yes, they were, especially Pukite!

it was very difficult to get snapshots of the butterfly but i took some and made a gif. in the end even Makonite noticed the butterfly on her shoulder.

the thunder is getting stronger but it stays far.
Top

kids were disappointed after this visit. i wonder why Lubana came, only for 4s ..?
kids went quite mute after she was gone.

that last thunder rumble was closer than any so far.
a Pontu clip: