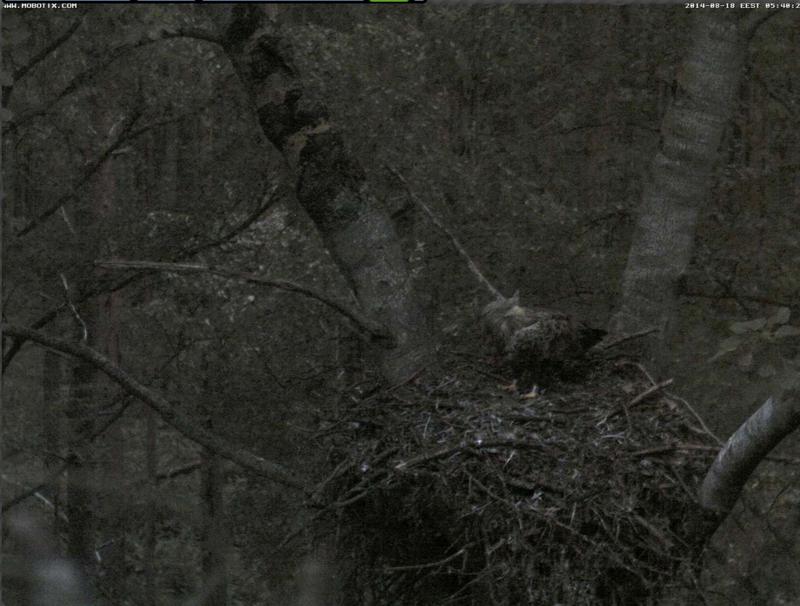 She came before, but I see in Pontu snapshot until 5:38 pictures.
Top

This is Sartas, i see the Rings! Then he gave a warning call?
Like last night he came without Prey. What does this mean? 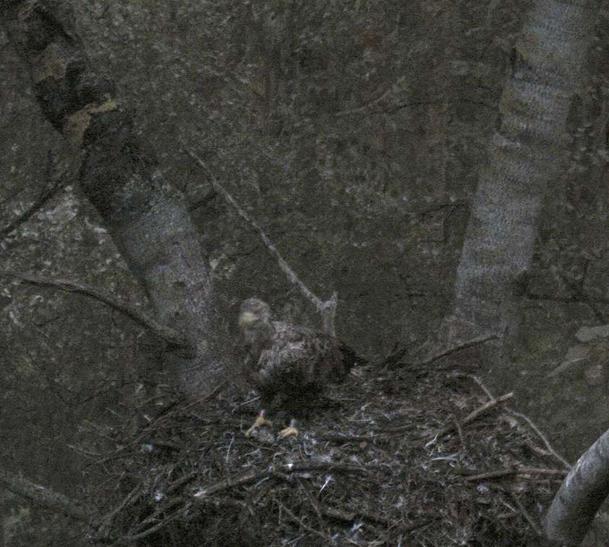 it may be that Sartas look for Lubana?

EDIT: 6:39 I do not see any activity at the nest.
I have no more audio connection. So I'm going to work
Top

one eaglet is in the nest 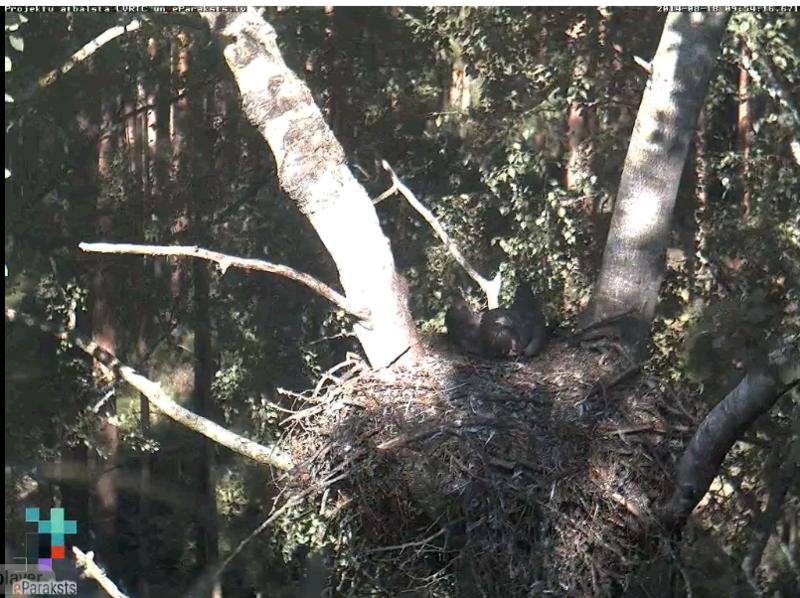 no eaglet in the nest a while ago.

i'll add some more Pontu clips starting from where i got yesterday. the internet seems work at normal speed today (the sports games are over 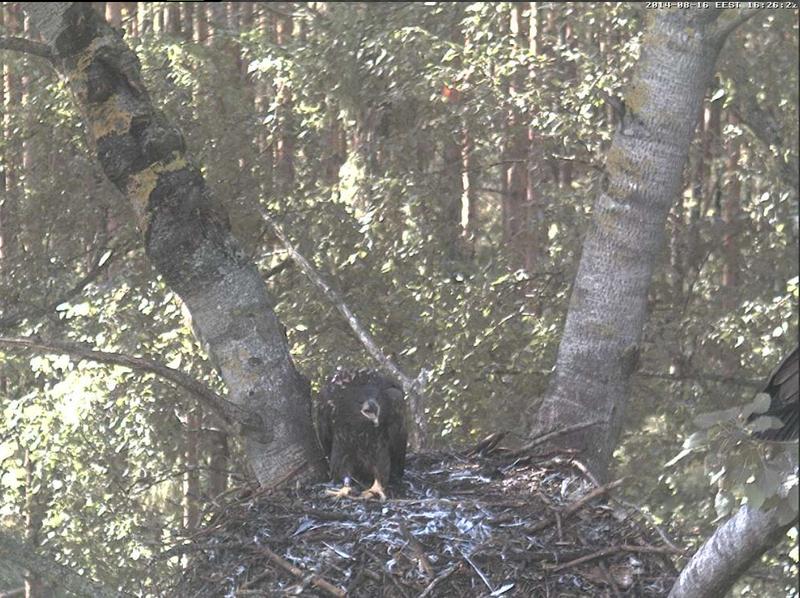 actually there wasn't any delivery. the tail on the front right branch belongs to Pukite and he is receiving a non-welcome from Makonite.

just seconds later Pukite climbed higher out of the picture. (i left the picture here because it is from two pages back)

i'm not sure if i posted this clip already or not...

you can of cource skip it.

Makonite went on searching for edible bits and talked to herself and Pukite who talked back.


.. and further on Makonite cleaned the nest. then she rubbed her bottom against the nest. finally she began to preen herself.

Makonite stood in the nest and called....


... and she called. then she began to get tired and seemed to snooze standing up but then she woke up to call again. Pukite called from his branch, too. they both seemed to get supper served.


Makonite also made some catching exercises in the nest. Pukite flew into the nest at 17:18 and Maonite chased him away a little lazily. Pukite flew away in less than a minute. Makonite stood in the nest looking a bit puzzled: "what should i do then?". she flew away at 17:21.


i think they really flew away from the nest area because at 18:51 a flock of little birds came to the nest and searched it and its surroundings. there were at least great and bluetits among them. there were also a lot of little grey birds which i think belonged to the Phylloscopus-family, mostly maybe willow warblers (P. trochilus)the most likely species). perhaps there was another species represented, too, probably chiffchaffs (P. collybita). these two look so similar that it takes an expert to know them apart unless one hears them sing. i also think that at one point there was perhaps a tree-creeper crawling on the right tree trunk.
the little birds flew around the nest for at least 12 min. to watch that on video might be a bit boring though so i made a double-speed video of the Pontu video.
here's the double speed clip for those who enjoy life in the fast lane:


and for those who like to relax the normal speed video.

that's the way it usually goes if she is around.

the screaming of the eaglets could be heard again well before Lubana came with a big fish. Pukite followed her tightly and grabbed the fish. then they both began to listen... did Makonite notice that Lubana had caught a fish? and one could indeed hear that Makonite's voice was approaching. Pukite had a look at the fish which he was holding and then he listened to his sister's voice which was coming closer... it was as if he could foresee that he wouldn't be able to keep the fish when she'd arrive. and that was exactly what happened: Makonite stormed in screaming, took the fish and Lubana flew away. Pukite didn't even try to keep the fish but he gave it up quite easily and he got up to the left branch to wait. (maybe he wasn't that hungry?). Makonite began to eat.


it was a big fish and it took a long time to eat it.


after Makonite had finished she cleaned the nest turning to the left in the nest and began to wipe her beak against the left trunk and branch. Pukite backed towards the tip of his branch. it was as if he knew what Makonite would do next... yes: she got up to the left branch beside Pukite and began to pick up a quarrel with him. bad girl Makonite!

Pukite didn't want to play that game and he took off at 19:37. about 2 min later he flew around the nest... and then he came in to look for left-overs. Makonite began to scream on her branch in protest.

(Saturday evening still)
Makonite had eaten all by herself all that big fish which Lubana had brought at 19:10 so she let Pukite stay in the nest. she flew away at 19:41. Pukite stayed in and cleaned the nest from old fish bones and of that ancient half-eaten fishtail which has been in the nest for who knows how long. (i'm not sure if it was gone for good even now...)


then Pukite jumped around in the nest so that he dropped some sticks overboard. at 19:52 he jumped to the front branch and climbed up out of view.

she was sitting near to the microphone, one eaglet whined far away in the forest.
Now the Eaglet flew away. There was perhaps no food?

i think that Lubana came empty-handed this time. i took pictures of the Pontu clip which i played in slow motion.

Makonite flew in right after Lubana who left. she was then quite baffled to find nothing in the nest. he stood there like a giant live question-mark for a while.

then she flew out but i think she stayed somewhere nearby because i heard an eagle-sneeze at 21:00 (not from quite next to the nest but at some distance).


at 21:12 Makonite still called once. then it became quickly very dark and i didn't listen to the Pontu video much longer.
i have increased both brightness and contrast in both these clips. 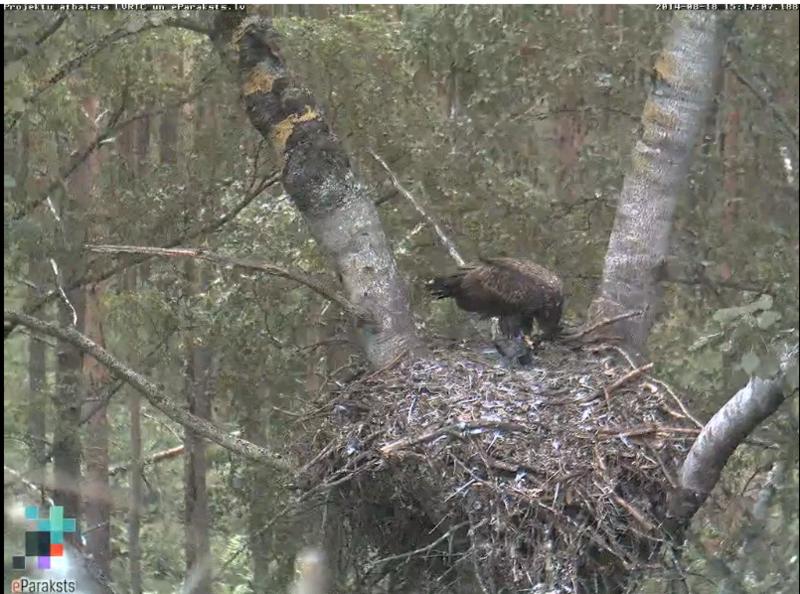 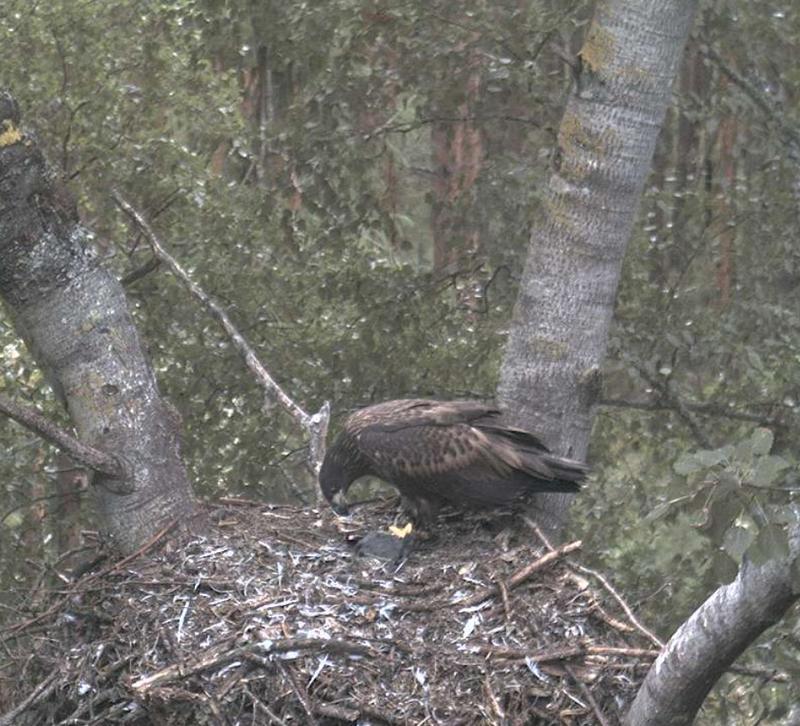 Makonite has always the meat

she is at the beginning very carefully. Perhaps the thing has still lived?
Top 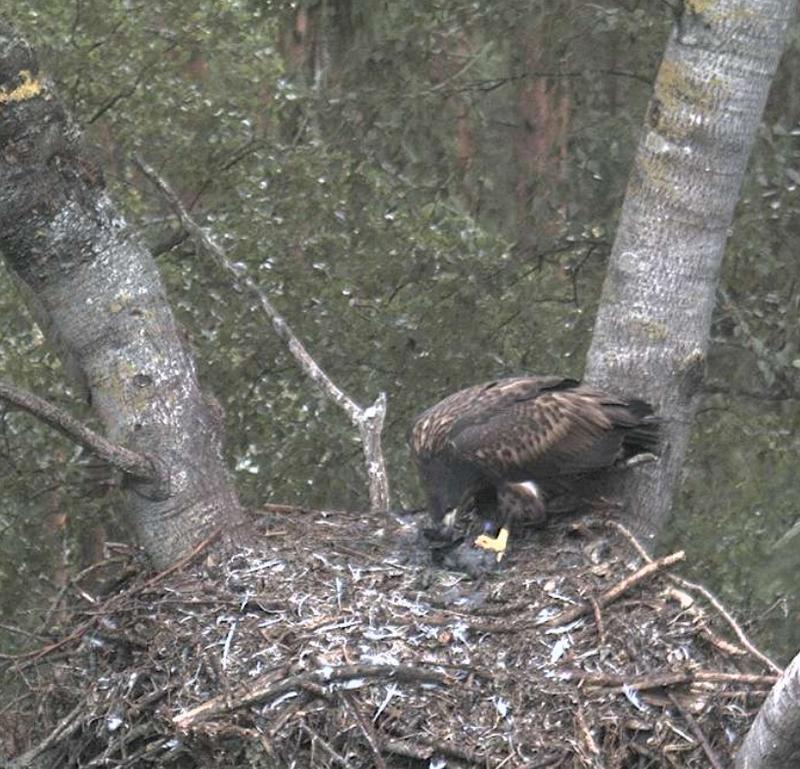 Maybe that's not a bird?

It is meat that I see, because Makonite still eating.
Top 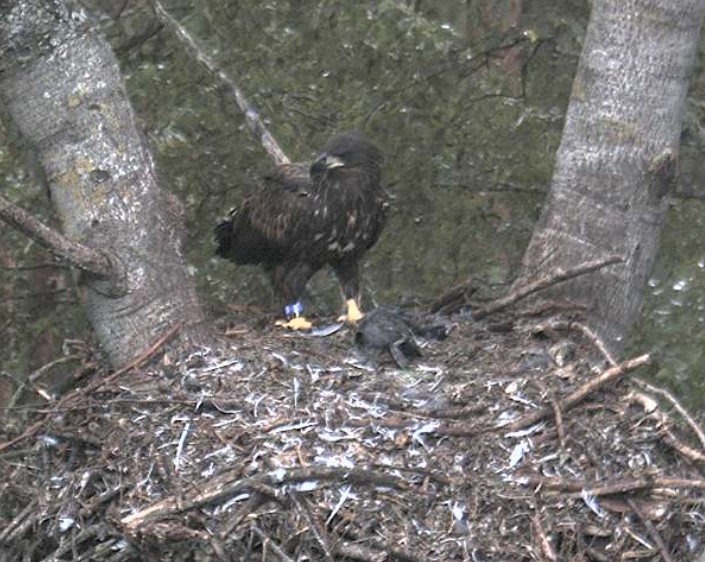 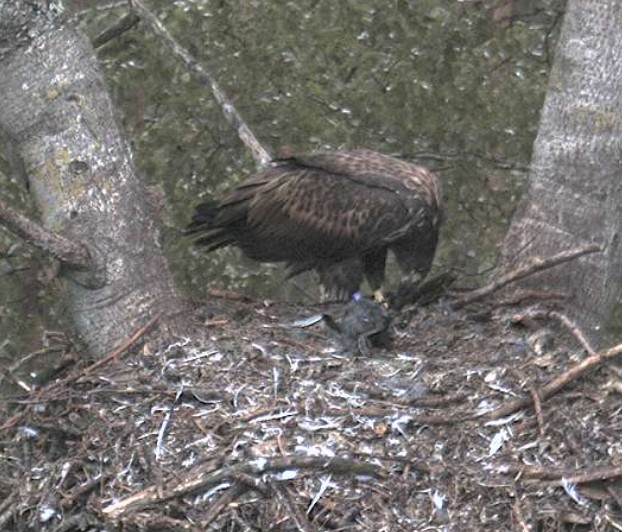 it is a bird. I see gray legs
Top

one eaglet has been lying in the nest and snoozing. i guess it is Makonite having an after-meal nap.

it got up and took the bird. it looks so slender that maybe it is Pukite after all. it is Pukite, i see the number 77. he begins eating.

i have now some Pontu clips from yesterday morning.

I could not see Lubana!

both eaglets had been calling near the nest for a long time... Pukite flew in to the nest, searched it and listened to Makonite voice from the forest. he realized that there was something exciting and flew out. more crying followed... then Lubana landed in the nest with a fish, tore a piece out of it as is she were planning to eat it but then she saw that the eaglets were approaching. she threw the piece on the nest and almost at the same instant Makonite fell like a stone from the sky on her!

Lubana escaped in the last millisecond and flew out. soon Pukite flew to the nest but Makonite didn't let him stay. she began to eat the fish. in between she kept looking to the front right and squeaked in an annoyed voice. i guess that Pukite was there on the front branch and Makonite was telling him to stay there.

after Makonite had eaten the fish she got up to the left branch and then took off.


after Makonite was gone Pukite flew in and searched for leftovers. then he lay down.

Liz01 wrote:8:14 Both came screaming flown the nest. What happened I do not know, I was not on the PC. I saw two eagles for a short moment.
Now is still an eaglet in the nest, he was short on the left branch and jumped back into the nest.
[img http://up.picr.de/19235220hp.jpg /img]

i made a Pontu clip of this episode but i still can't say what was going on there. it seemed like the kids were racing to the nest, Pukite landed and Makonite continued to fly past the nest. the Pukite was looking out at something and both were making voices.. then Puktie got up to the left branch and kept watching to the left...
after a while he got down and began to look for leftovers: he found the ancient piece of fish again! that like been like a magic pot to them: it never runs out.

it was Sartas who brought the fish. his ring can be seen in one single picture in the video.

Sartas flew from the behind to the left and i think Pukite flew from the front branch to meet him. the other eaglet, i think Makonite, flew to the nest and she was the more clever one in this race: she got the fish from Sartas' claws. Pukite came too late. both creamed like crazy till there was sound of wings: Sartas left. then both went silent and Makonite began to eat her fish. 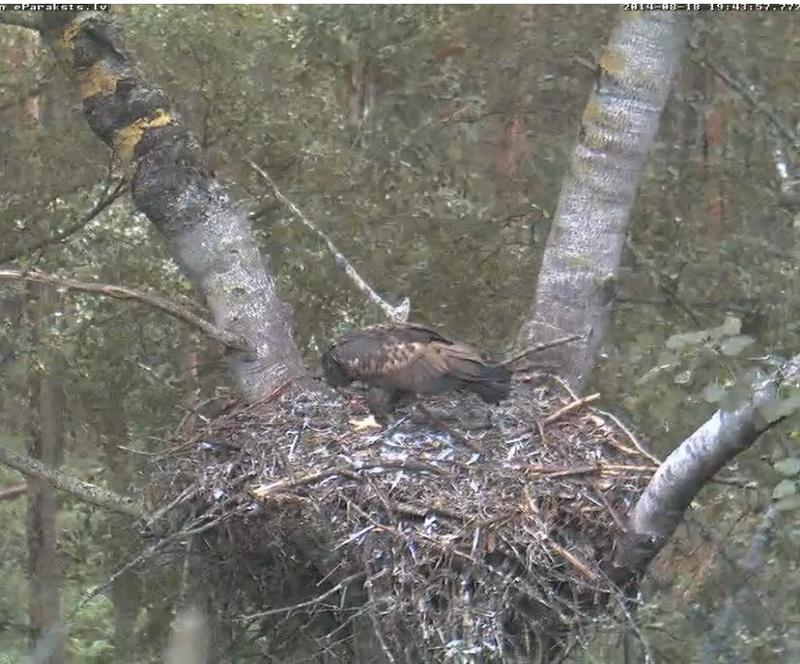 I think it is Makonite eating the rest of bird

From Pukite I saw nothing today and not heard.

Ame, the video with the Horde great tits and other birds is very nice.

I have all kinds of tits and Treecreeper. Very nice animals.
Top

at 5:19
i do not see anything yet, it's too dark. But i hear a eaglet call. Maybe Nest owner Makonite