here's a video of his visit. in the end he just disappears. my camera got jammed.


and indeed there is a lot of new material in the back of the nest. this is the nest at 8:34 this morning.

after the visit at 12:03. that looks rather comfortable already. EDIT: the couple made one more trip to the nest in the dusk at 17:24 -17:37.
after they had left one they could be heard mating in the forest at 18:02.
they could also be heard mating in the morning at 7:08.
videos of this visit and the mating voices can be found in the playlist below. in the picture album (also below) there are also pictures of his visit.
picture album: http://s561.photobucket.com/user/anmael ... 2014-02-28
playlist: http://www.youtube.com/playlist?list=PL ... DAbyPYw8UF
Top

Is this usual behaviour, as I have not seen the female at all today - are they usually nestorating every day together?
Let's hope that the couple stays here!
Top

They were arranging sticks together and the male fetched another stick. They left at 17:38

She is a big girl!
Top

so far no-one has been at the nest as far as i have seen.

i have been wondering: so far we have not seen or heard any signs of mating, have we? the few times that there have been eagle calls they have not sounded like mating. these two must be camera-shy and have gone to some secret place for that.

the female is maybe out somewhere filling herself with food and because of that she is mostly absent. she has to eat for three or four now if she is planning to lay eggs.

(i think that Linda was perhaps not getting enough food last spring and maybe because of that she was able to produce only one fertail egg. but who knows? there certainly wasn't a lot of food in Saunja before the bay 'sloughed' its icecover.)
Top

here's our little carpenter Mrs Woodpecker outside the live camera view but Pontu still-camera has captured her. i think it is a female Dendrocopos major even though the red under her stomach looks rosy-red or pale-pink, not scarlet-red as bird guides say and depict. (the colours would suite better D. syriacus but i don't think that is a plausible candidate here.)
is this D. major female?

i have seen Mrs carpenter working there up on the left trunk in a lot of Pontu pictures. sometimes Mr Carpenter has been with her. it has almost looked like Mrs Carpenter might be making a nesthole up there. i don't think that the eagles would much appreciate CArpenters as neighbours though, because the offspring of D.majors are very loud!

. Eagle was here for 1 minute then he took off again. 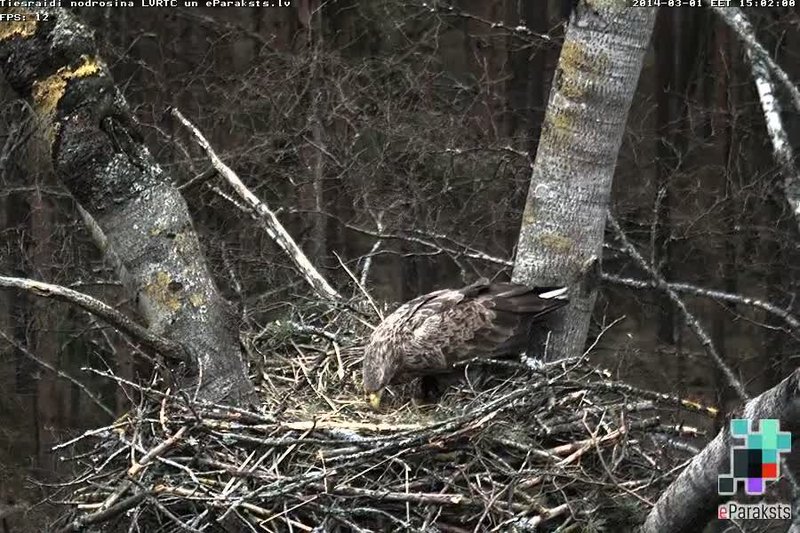 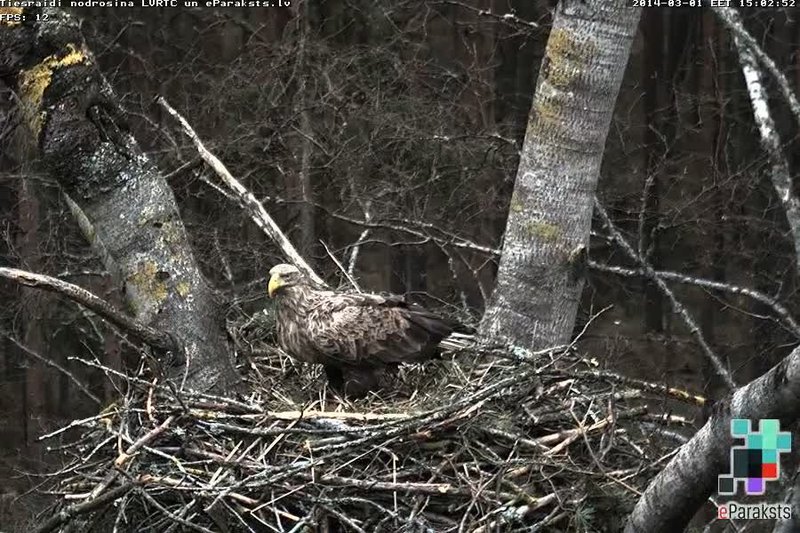 Manu, male was there 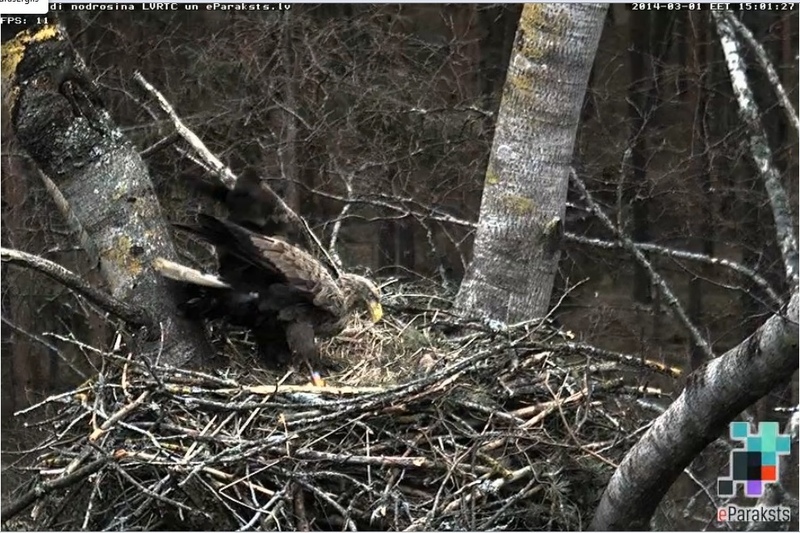 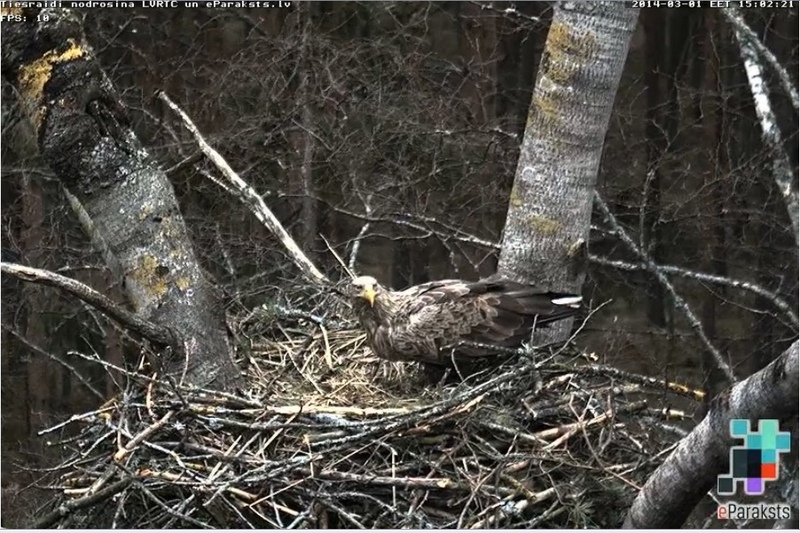 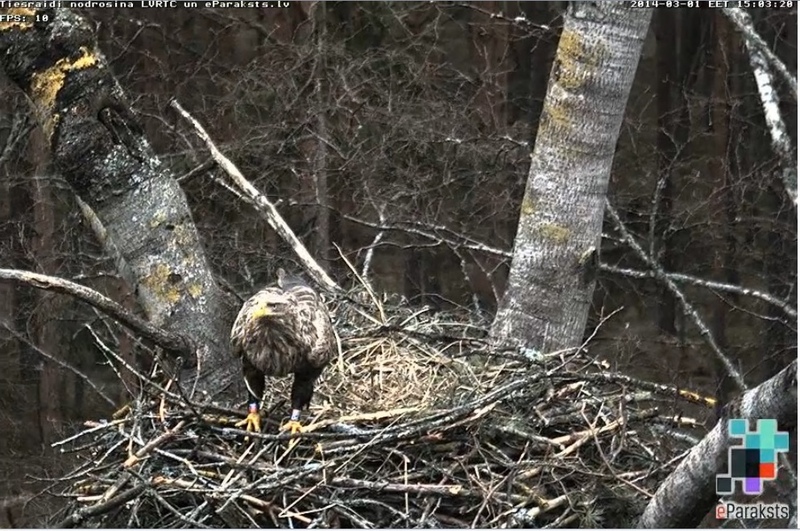 Thank you Shanta. I didn't see the rings

i missed the visit totally, my connection has been so choppy again today. thank you for noticing the male's visit, Manu and Shanta!

he got himself photographed in two Pontu pictures on his visit. i made an enlargement of the latter at 15:03. there he is showing his rings again. can you make anything out of it?
i think that the top, orange stripe will remain unreadable... those were the hard ones to read in the feeding ground, too. 17:41 i think i hear a pygmy owl calling. it sounds a bit like a truck backing up. the rhythm is slower though.

i just wish that the sound (and the picture, too) weren't so choppy...

it calls a loooong time.

i think that this forest looks just the right kind of forest for a pygmy owl.

now it was silent for a while and began calling further from the nest.
Top

i think that the pygmy owl changed place again and continued a little further. 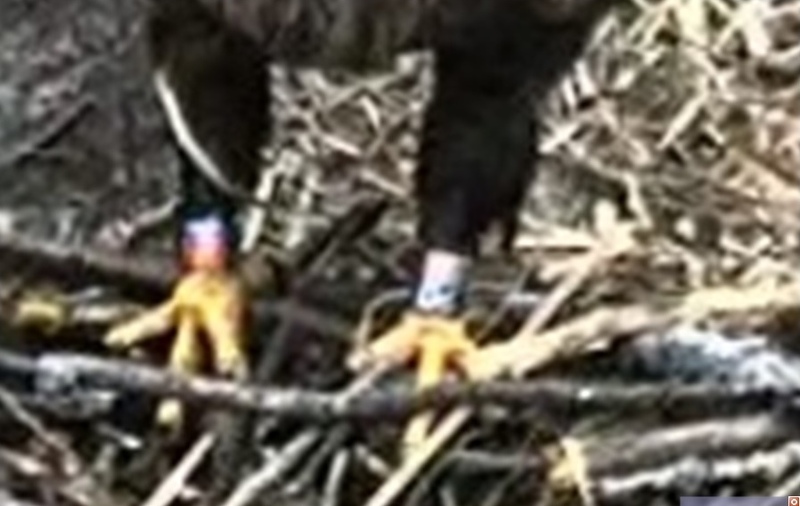 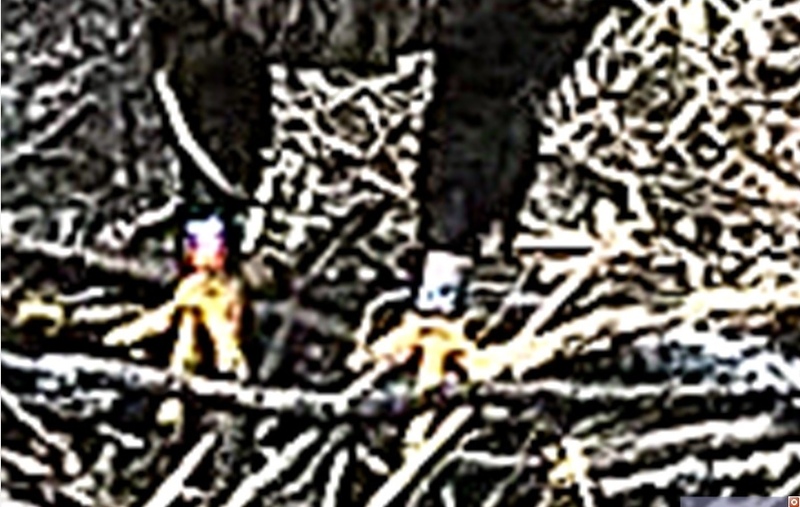 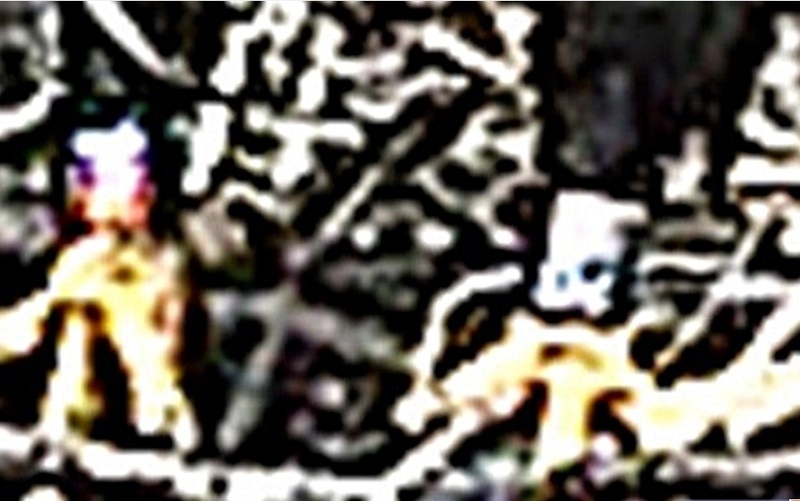 Ame, how can I get or see Pontu pics?
Top

I found two records of the visit of the eagle.
On this video I think the rings aren't visible. 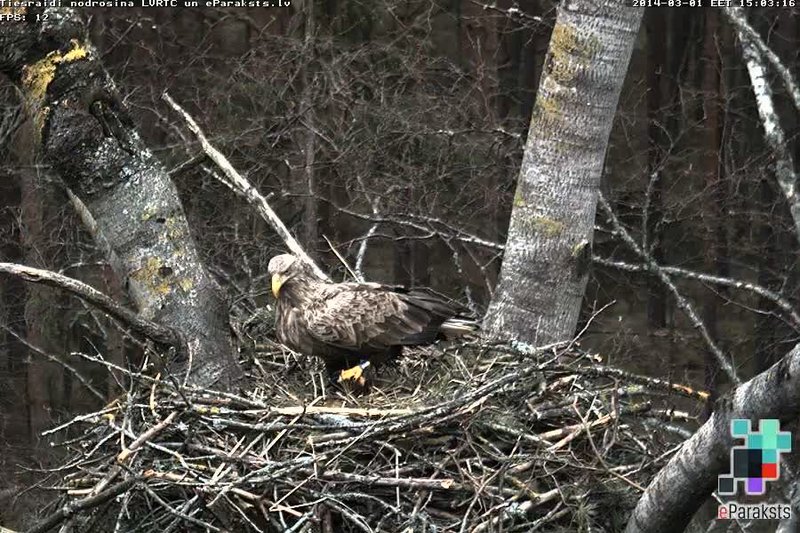 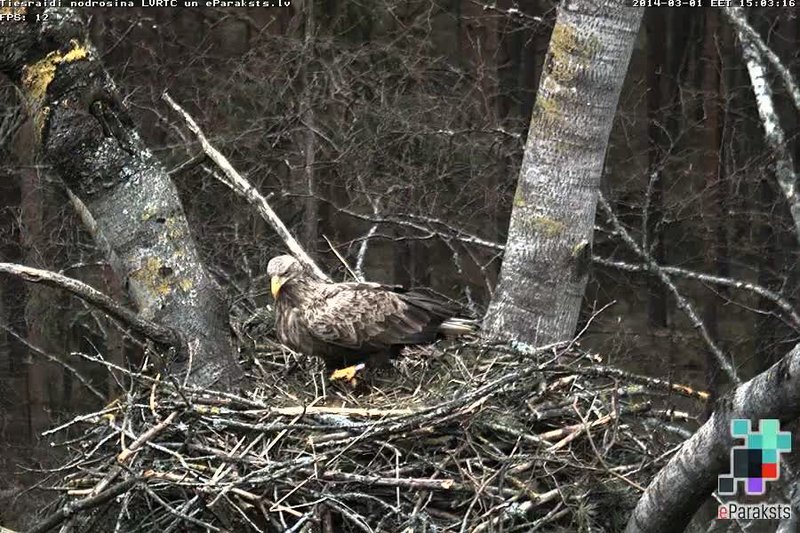 thank you for your attemps of reading the ring. i think your D must be some number though. the ring codes are of form letter-number-number-number, where the first two characters are on the top stripe (orange in this case) and the latter two numbers are on the lower coloured stripe. so there should be two numbers on the lower blue stripe. D is close to 0 or 6 and 9 maybe. orange upper stripe and lower blue stripe belong to year 2007. in that year the letter on the upper stripe is V.

so we know that by the colours that the male is a 'V-bird'.

no camera... but it is rather early still.

NOTE to those who have used Mejuba: it will close down by April 1st.
Top

the camera has woken up!

i think that the nest looks untouched... at least no major changes i think.

but the connection is not quite stable. it cut off but restarted.
Top

thank you for your attemps of reading the ring. i think your D must be some number though. the ring codes are of form letter-number-number-number, where the first two characters are on the top stripe (orange in this case) and the latter two numbers are on the lower coloured stripe. so there should be two numbers on the lower blue stripe. D is close to 0 or 6 and 9 maybe. orange upper stripe and lower blue stripe belong to year 2007. in that year the letter on the upper stripe is V.

so we know that by the colours that the male is a 'V-bird'.

Ame, thanks for info. Maybe light and position let 0 looks like D. Don't think it can be 6 or 9, because in the middle cannot see a line and number 4 size cannot be smaller as the number before ... or

Latvian sure have a list - do you think it is possible to find out if the number 04 is present?
Top

Shanta wrote:... Ame, how can I get or see Pontu pics?

i think that the 0 looks like D because of the curvature of the ring: the character is on the left of the ring. the only letter on the orange-blue rings is V on the orange part. the other markings are numbers. i'll look up if i can find an example...
here you can see an example of a V-ring from 2007:
viewtopic.php?p=206331#p206331
it is a bith untypical V-ring because the letter V can be clearly seen. normally they were very faint like the numbers in the ring of this bird.
Top
Locked
4693 posts