Both cameras, the live and the Pontu camera switch off in darkness in order to save energy. Both work, however, in very low light levels so in the last and first pictures of the day almost nothing can be seen.
Edit (in the end of season): To our delight and contrary to what was known in the beginning of the season the live camera worked also in the dark so audio observations were possible in the dark time, i.e. late in evenings and in early mornings. Video recordings were saved in the Pontu archive 24 hours a day (with few exceptions due to technical malfunctions) so video material was available from the dark time of the day also afterwards.

by ame
The nest is being built by a WTE couple where the male wears Lithuanian rings on his right ankle: the upper colour is blue on top of red stripe. The female has no rings.

For refreshing the memory the ring colourcodings can be found here:
viewtopic.php?p=192939#p192939

by ame
Major events at the nest

by ame
the nest tree seems to be an aspen again so this camera is in some other place as the Juras-Erglis camera was in 2013. the tree there was a black alder.
here's a picture of the male on the nest this morning at 11:34. by ame
here's a crop&enlargement of the Pontu picture taken at 11:04. the colours could be white over black but i'm not sure. white over black would mean year 1998, the same as Linda's ring. clearer pictures are most welcome!

by ame
at 13:11 the male came to the nest again and brought a big stick.

by ame
at 13:16 he left. not a clear view on the left ankle. the sunshine was too bright. 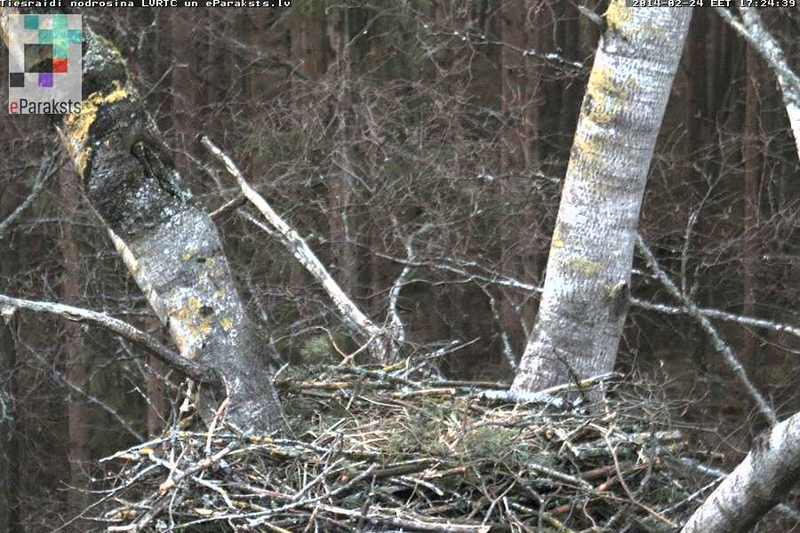 by Fleur
Great to see this

by Manu
Great to see the Latvian-WTE- Webcam is online again. And it's very nice to see the eagles are already busy.

by Bea
Cam is unstable

I cannot get a continuos stream, it is very shaky and choppy.

by ame
yes it is. mine is jamming all the time and sometimes it cuts altogether. even Fleur's video was 'jumpy'.

by Fleur
* excerpt from the movie.
Difficult for me to say what color rings they have

by ame
thank you Fleur!

by lispet
Thank you - the eParaksts logo is in much better position now!