Ame, I can only make videos when I'm home. (Monday I am again without I-Net on my work - also without Heating and toilets)

I'm very fast now, because I have new hardware. Intel core processor I7 and SSD hard drives. I can do everything at the same time, without less PC power.

I have not set my videos here, so that no one can say, all is double on the page.

But you're right, I often make shortened videos. and this is then not the same

11:38:10 There was a gunshot. Both had a fright and flew away instantly.
Pity, they were so content and peacefully looking around.

11:57 I hear the hunters shouting.
First chick in the Latvian Golden Eagle nest hatched May 10
Top

11:58 there is a battue. I hear the men loudly call
I think, the eagle have looked for a quiet place

ame wrote:11:09 Vents is kissing Shilute. and they are talking together in tiny voices! 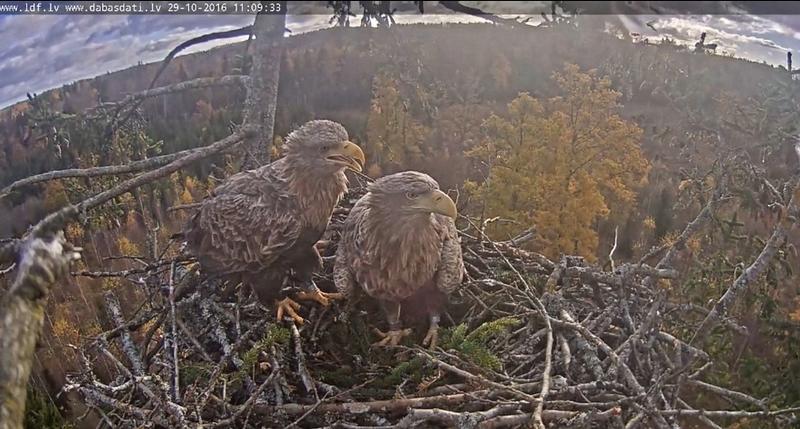 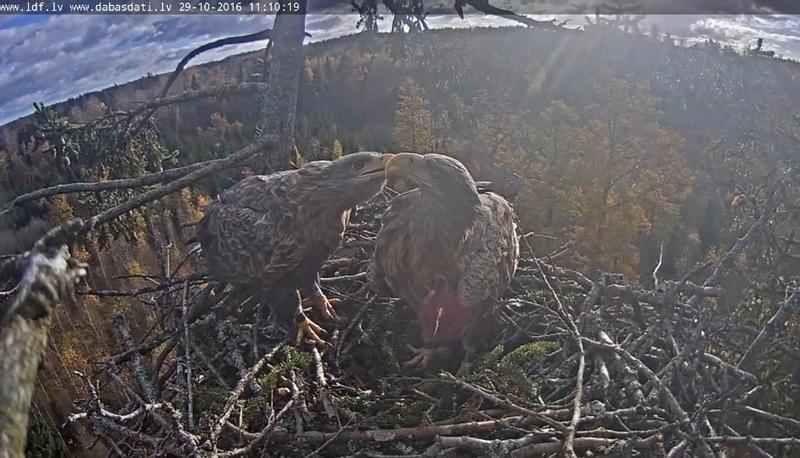 Ame, I hope, that you can solve your pc problem soon

They had only lunch. They are very close

Now they are a little further away
Top

I understood what she was talking about...

Silute: "listen to me dear vents, I see that you are too lazy with the branches and you bring only mini sticks, I hope that when time comes, you'll bring HUGE FISHYS for our Liz"

a few pictures from their love affair 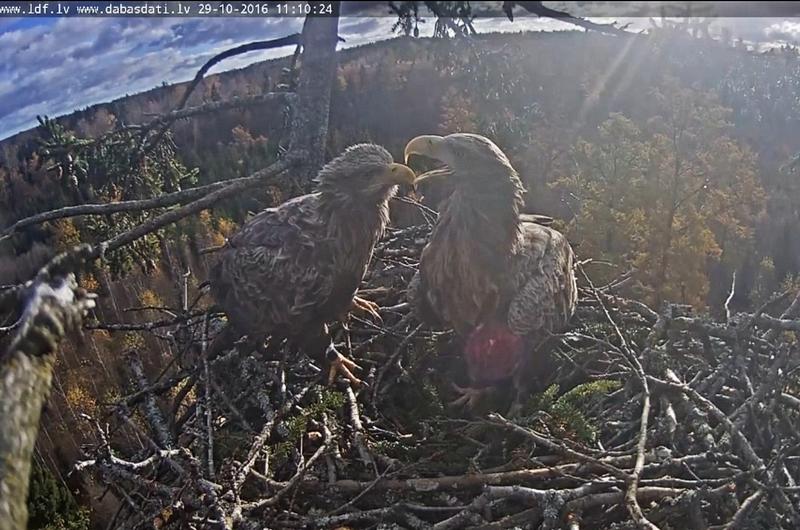 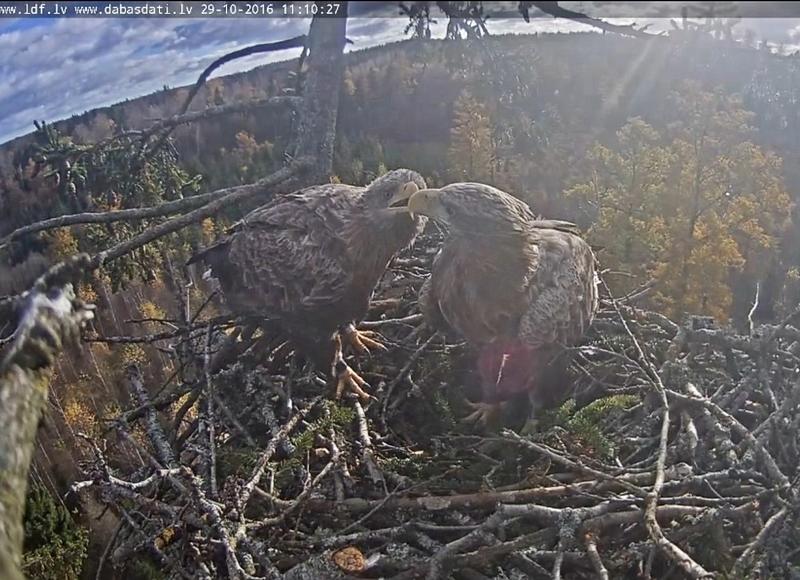 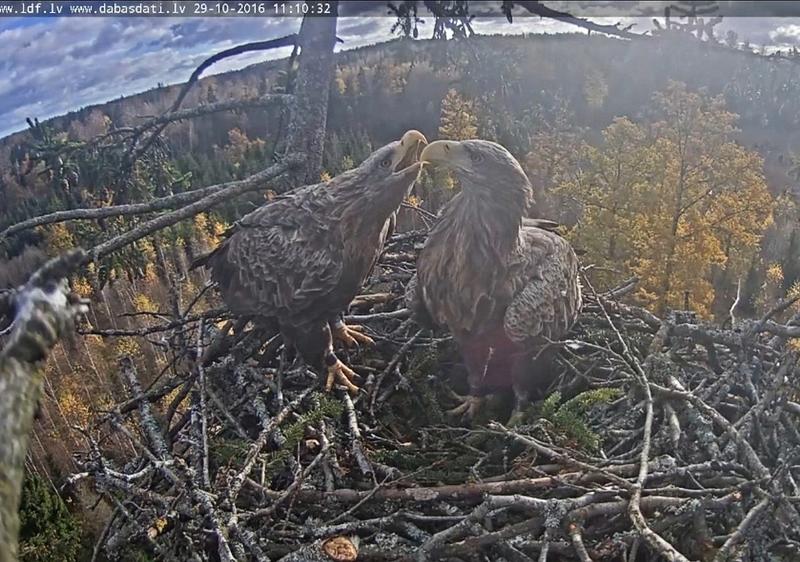 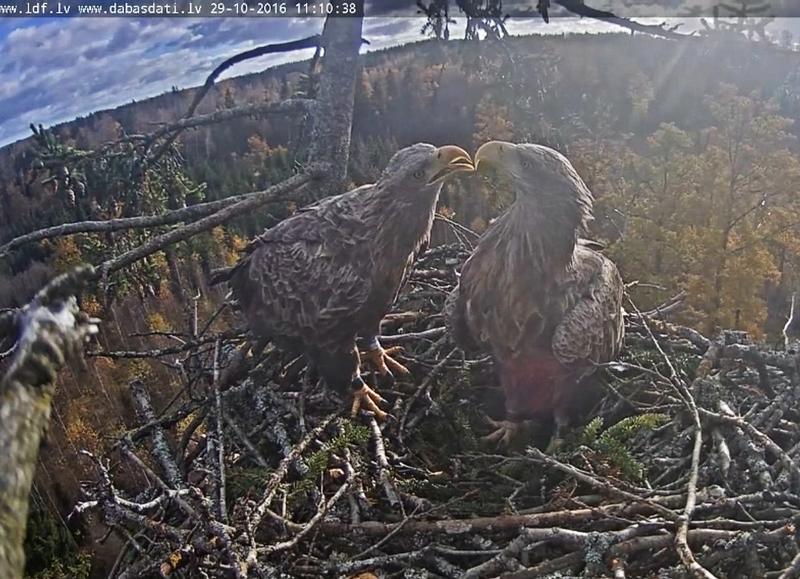 Is something wrong with my hair? 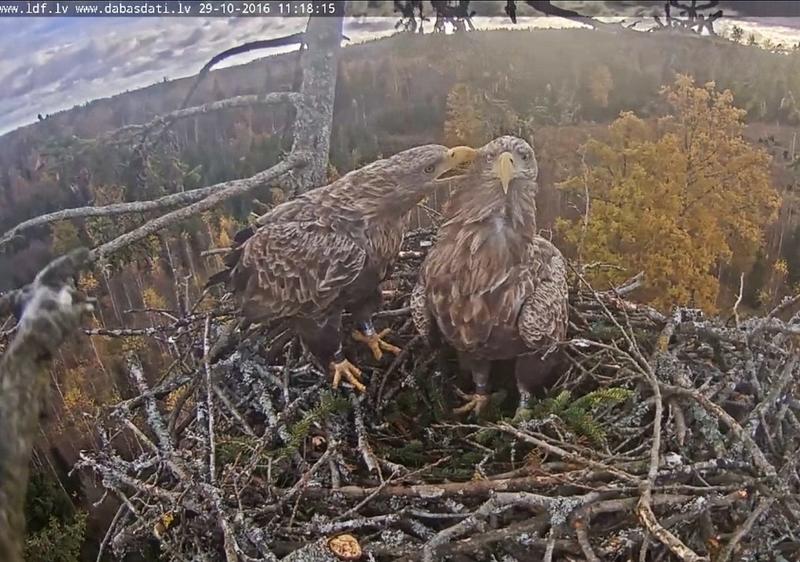 Oh thank you! it itches in the neck 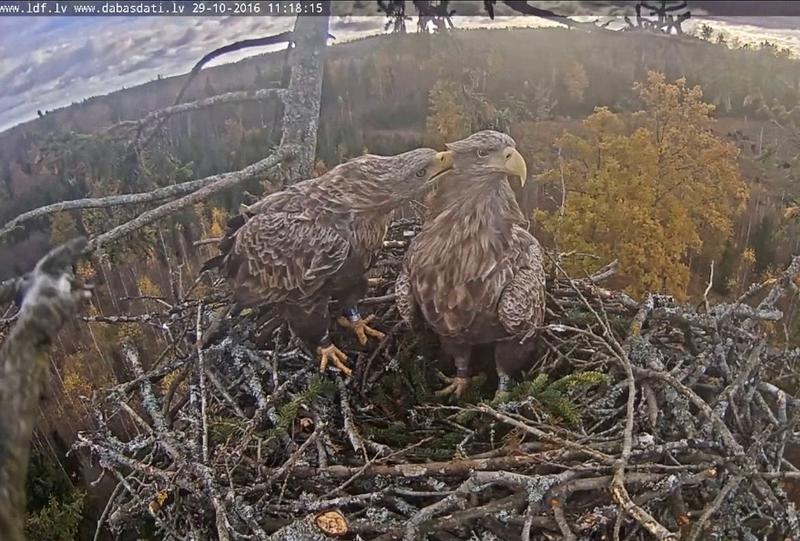 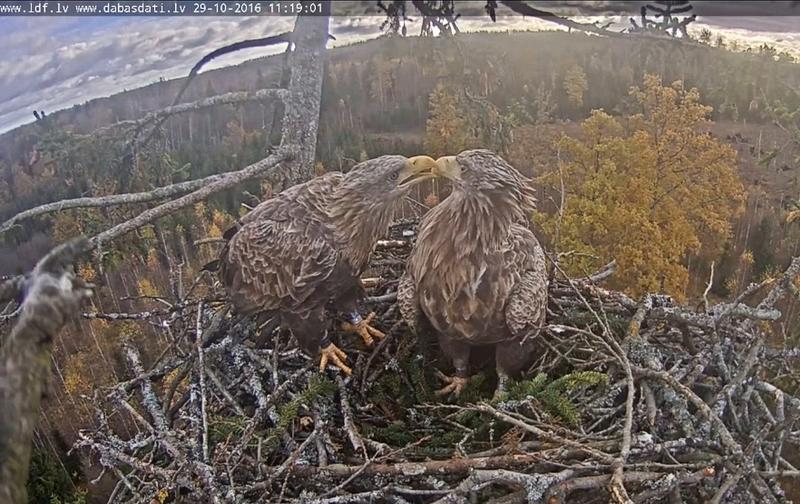 until now I saw no eagles.
I have read in the DD Forum.
Janis Kunze says, that the eagles learn, that after hunting there is food for them. Usually innards. Hopefully without lead

Liz! and nice weekend to you.

When is the end of the hunters noisy visits? I remember that there is a fixed date.
Top

Shilute has something in her right claw. I can not see what it is. Maybe grass. 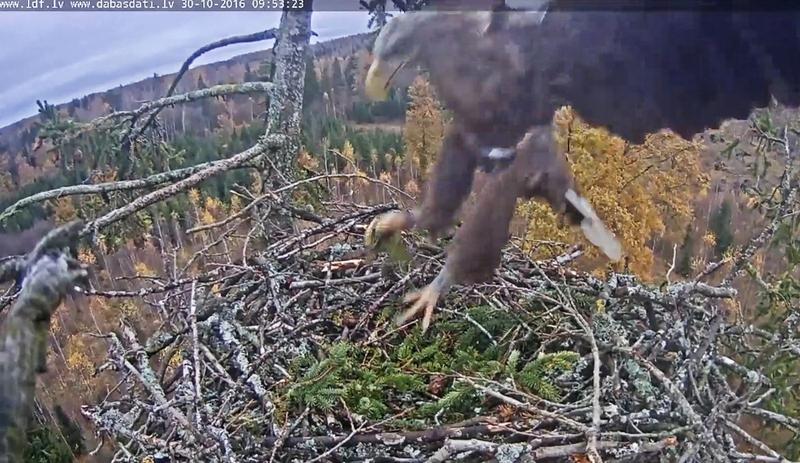 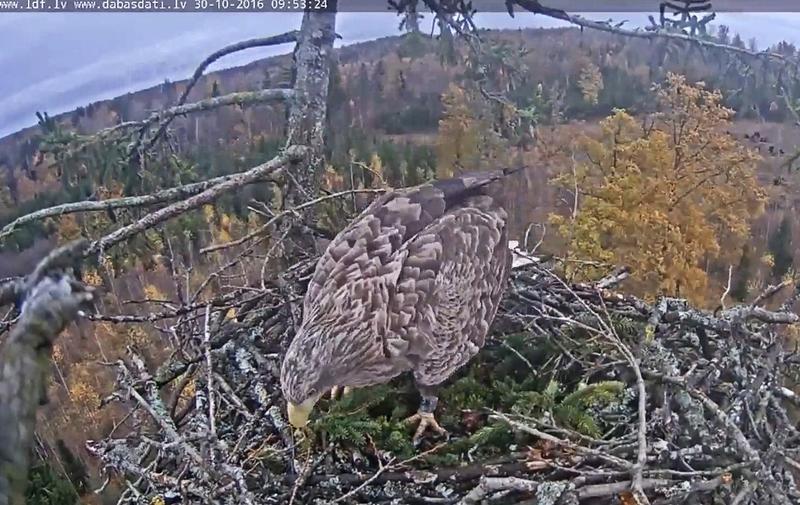 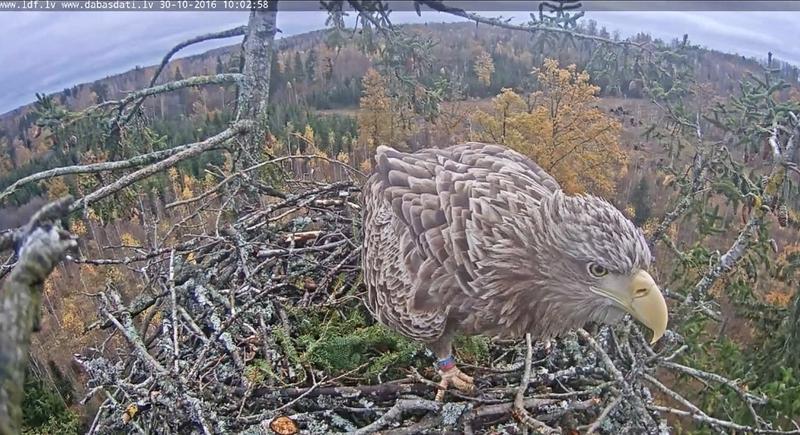 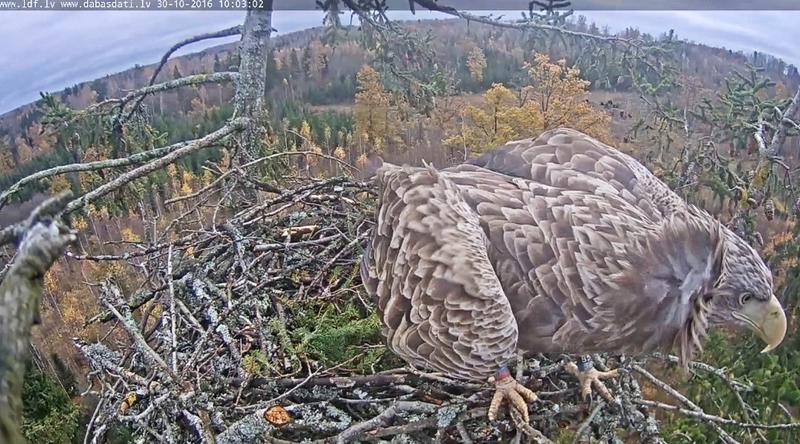 I checked her legs... they were clean! She didn't visit the hunters sites

When is the end of the hunters noisy visits? I remember that there is a fixed date.


There are different times for different animals.
Basically it is the whole year hunting season. Just like in Germany

14:08 people's voices. a man and a juvenile, probably a boy. this does not sound like a hunting party. they are probably just walking somewhere there and making noise and talking.

about hunting: i think that hunting of big animals like elks and deer is necessary nowadays because otherwise their populations would explode too big. even on the present population levels they make damage in forests and pose a serious threat for example in traffic. a collision with a 500 kg-elk is often lethal not only for the elk. their populations have grown unnaturally large since big animals of prey like wolves and bears are wiped out in most of Europe by humans. now humans have to harvest the elk to make some correction to the unnatural situation caused by their own actions.

don't ask me if we should turn clocks (or rather calendars) back in time. in principle i would like to have more wolves and bears but i really can't say what i might think if i lived deep in the countryside and had children who would have to take a few km long journey to school through woods...

i think the "something" was probably a green spruce twig with a cone. i took snapshots frame by frame of her arrival. in one frame the twig can be sen more or less clearly against the sky.

in the other frames there were double images of the twig and the cone or the twig was just blurred because the camera could not focus due to the poor light and swift motion. anyway i made a gif of Shilute's landing. 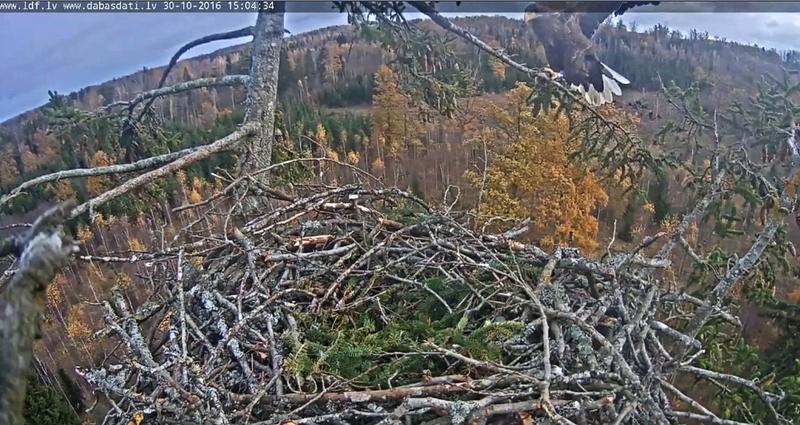 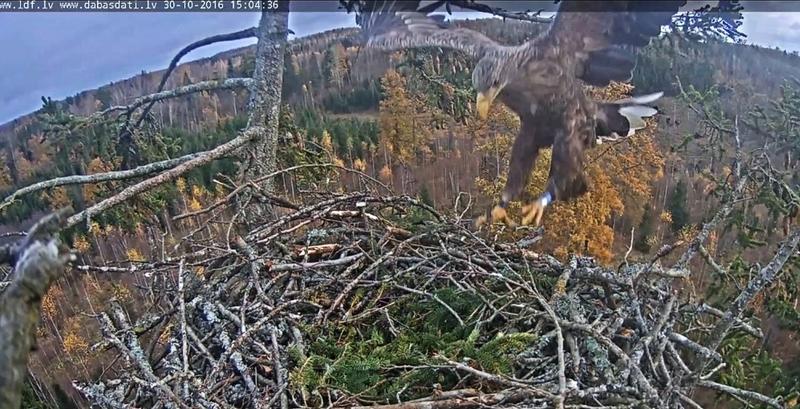 15:08 he jumps on the left branch and flew away. a very short visit

Thank you for identification of the "thing" in Silutes claw