the sleet rain goes on... something solid white is gradually building up in the bottom of the nest.

i have now some videos from this morning.
7:16 the eagles came home. i think that Vents landed first and then Shilute. Vents went up to the left branch rather soon.

quite a change within half an hour.


7:40 Shilute brought a stick. both worked... then Shilute went up to the balcony.


Vents went on working on the nest. there were some crows cawing nearby. Shilute called a little, maybe to them.

7:53 Vents began to peel one stick in the back rim of the nest. Shilute flew out.


for some reason it became very important to Vents to peel the bark off the stick. working with such a detail does not seem very important at this stage (nor any other stage) of the breeding but he went on with the stick for a long time.

7:57 Vents was still fiddling with his stick while Shilute did something much more useful: she brought a stick.

then Vents did something much more important: he kissed Shilute a little.

then she went up to the balcony. - there was also some very distant hollering at the same time. hunters probably. the eagles didn't pay any attention to them.

while Shilute was out of the way on the branch Vents returned to his important task of peeling the stick.

8:04 Shilute flew out and Vents got up to the branch.

8:15 Vents returned with a stick, worked a little and then went up to the balcony.

after the tender moment Vents went up to the balcony.
Top

8:27 Vents had changed to the top branch and Shilute got up to the balcony.

8:32 Shilute brought a stick and then worked on the nest.


8:41 Shilute jumped to the right branch and out of sight.

the view is getting dizzier all the time.

8:49 some little birds visited the nest. a nuthatch made a lot of voices but a crested tit was on the nest first.

then the nuthatch appeared on the nest and right after it a great tit flew to the topmost branch.

the great tit flew down closer to the nuthatch.

the lens is getting covered with snow. i wonder if we shall be able to see anything by the evening.

in the moment it looks like an abstract painting 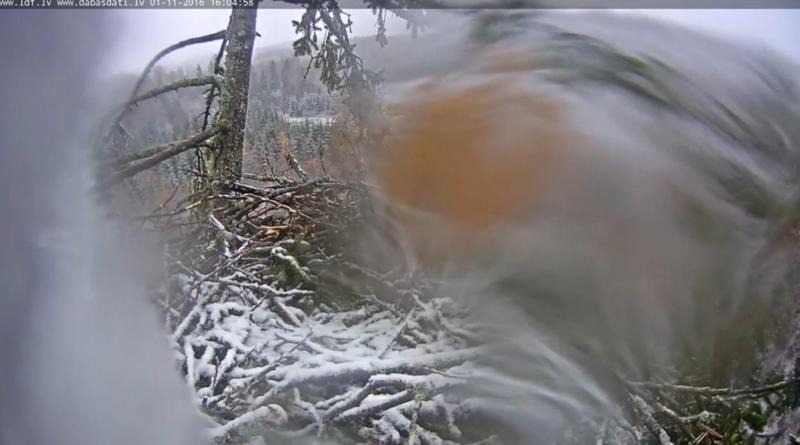 I have internet again

a crow was cawing... and the sound of water in the stream downstairs is strong. i think there's some snow on the ground, for example on the left. the clouds don't cover all the sky uniformly, but there are clear holes. 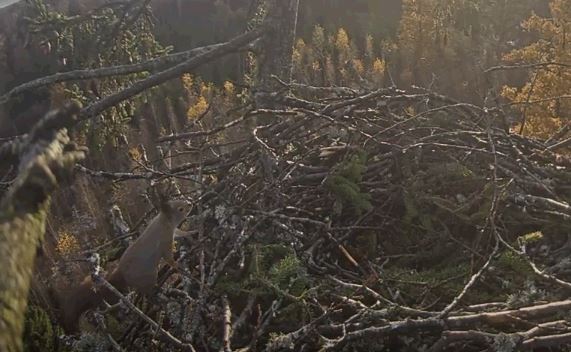 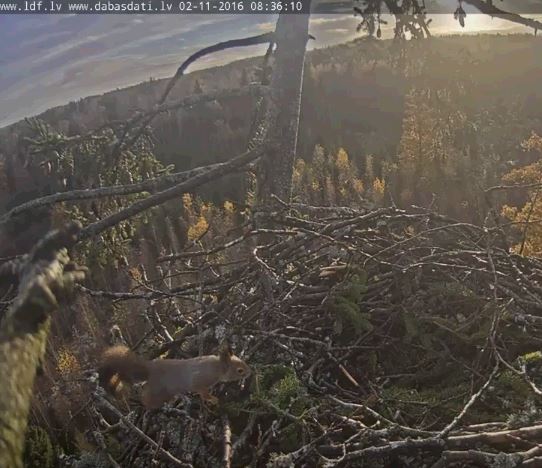 the sun is coming out of and going behind clouds.
Top

12:24 someone is on the back balcony behind the nest rim. someone blond?

yes, it's a young eagle, very spotty but with a beak which looked rather yellow already. it didn't seem to have rings.

each picture in this gif is shown for 0.5 s except a few where the visitor can be seen best. those can be seen for 1 s.

it is almost adult. I saw dark spots on its tailefeathers 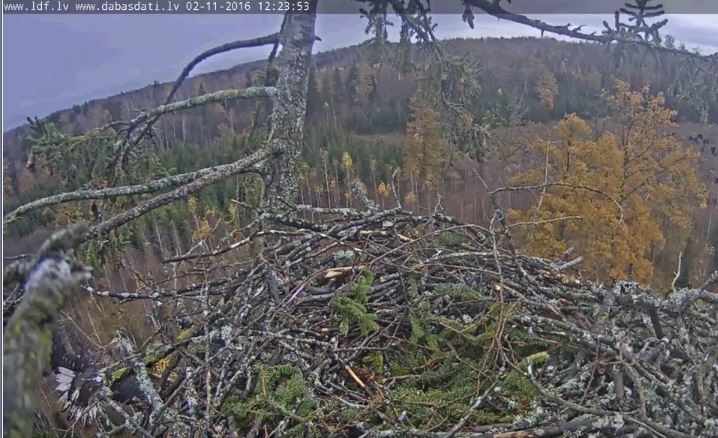 it flew to the far left where it came from in the first place.

this was a shy fellow, stayed out of our view.

the back rim of the nest needs a lot more material. it's still so transparent that i could see through the holes the eagle's head moving there.

it's funny how the costume and other details of body colours develop in different stages in different young eagles. sometimes the tail is almost white but the beak is still dirty or vice versa, sometimes the eyes are still dark in a bird who looks adult otherwise or the body is still very spotty but eyes and beak look adult etc. each eagle seems to mature in an individual way.
Top
Locked
7714 posts