8:54 two eagles flew by! Milda called but not really loud.
Raimis had to be the one who flew below the nest because Milda looked up and was angry. another eagle's wing tip flashed in the top right corner. 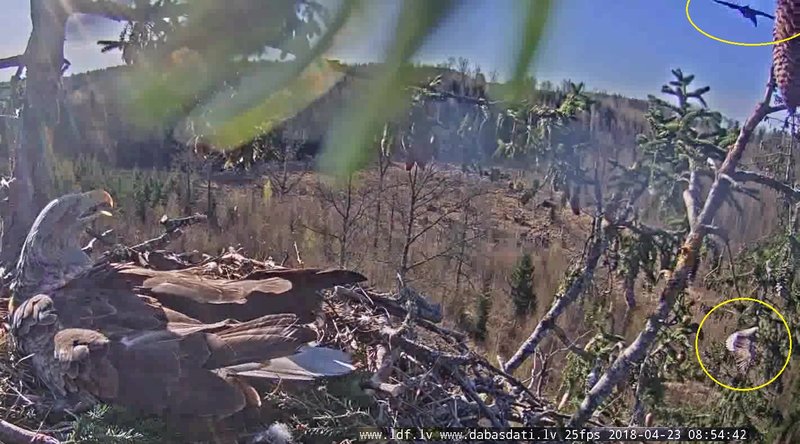 then Raimis flew in with a piece of fish.
then another flyby a strange eagle. Milda squealed. Raimis stood on the nest for a while and Milda squealed.
then Raimis got up to the left branch and cleaned his beak. and sneezed.

maybe that was the wanna-be adopted son of Raimis who thought that the fish was for him?

that a tail part of a really big fish!

9:11 Milda got up and began to eat.
https://youtu.be/ZYJkmxSgiRo

9:24 Raimis brought a big bunch of hay while Milda finished eating. Raimis went to the left branch. Milda talked to him in her small voice and spread the hay around the nest... then she lay down on the eggs.
9:27 Raimis flew out.

If we were able to take a pic on the ground under the tree, covered with all things Raimis lost - I'm sure it looks like a large shop

And this is before the living fish we see soon

If we were able to take a pic on the ground under the tree, covered with all things Raimis lost - I'm sure it looks like a large shop

And this is before the living fish we see soon

yes, and soon all that will be painted white.

two more clips from this morning.
7:58 the swans flew around over the meadow a few circles. then they landed on the pond. so there is water there.

this is a close-up of them.

13:57 Milda made a short trip to the top branch and back.

16:15 Milda started to look in the sky with interest. ...
Raimis brought a big fish for Milda. she was squealing and yodeling ... and looked at Raimis in a way that seems to say "what took you so long?!? i have been starving here."

she flew out with the fish. Raimis covered the eggs.

She had to do an important thing

21:45 Milda rolled the eggs one more time for the night.
good night!

6:10 Raimis brought a bunch of hay. Milda talked to him abut didn't want to get up so Raimis went to the branch. the swans flew around over the meadow here and there. finally they flew to the right and Raimis flew after them.

Ame, This is her best place to poop.

Yesterday it was in the same spot.

10:10 Milda began to squeal... she saw Raimis coming.
he brought a bunch of hay. Milda had a lot to tell him.
some of the trees have already taken some colour. i guess the brightest are willows in bloom. 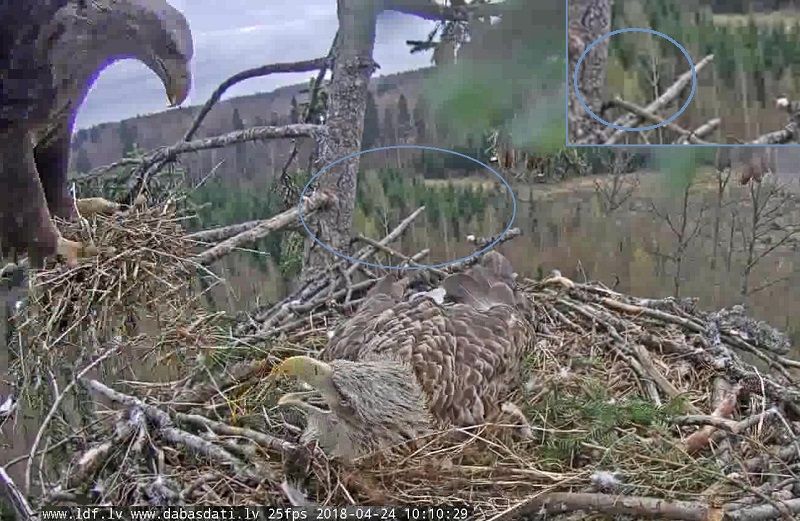 10:11 she got up and talked more. then she flew out talking all the time.

that was a long shift for Milda, 16 hours!
Top

He came very early in the morning, brought muddy hay, but she wanted to stay, so he left.

I see you mentioned it...
Top

20:20 Raimis began to call... then Milda came. Raimis got up and flew away. Milda covered the eggs.


that was a long shift, too, over 10 hours for Raimis.
Top

5:40 Milda woke up. she looked like she was deep dreaming a dream.

6:20 Raimis brought a big bunch of hay. Milda talked a lot to him. maybe she was telling about her dream.

after the change Raimis slept on the nest for a long time...

9:43 he saw something in the sky. he called.
https://youtu.be/LgDpqcY3WzU
Top

11:23 (nearly 24) he flew out to the meadow and vanished behind the haze in front of the poop branch.
- there's so much hay in the nest that the eggs are buried invisibly inside the pile.

11:24 both flew from the direction where Raimis went. Raimis flew by the nest tree on the left and Milda landed on the nest. she uncovered the eggs from under the hay.


then she herself covered the eggs.
Top

12:18 - 12:25 Milda looked in the sky and squealed many times in a very tiny voice.
perhaps Raimis was flying up there for her entertainment?

i'll be away most of the day.
Top

After watching the nest of the US Dad who disappeared, I promised myself to respect Raimis (till the end of season